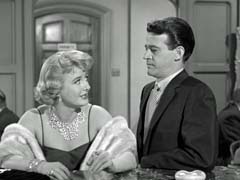 From The Perry Mason TV Show Book
Actress Constance Ford plays a dual role of sorts as a troubled woman living a double life. Helen Reed, a mild-mannered housewife by day, turns into Joyce Martel, a roaring harlot by night. Perry needs Joyce Martel's testimony to clear her brother of a murder rap. Helen Reed informs Perry that she can only recall her other half, Joyce, when her psychiatrist puts her under hypnosis.

A dramatic courtroom drama ensues, with Helen Reed turning into her double on the witness stand. 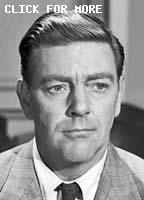 Uncredited Actors: Don Anderson is one of the spectators in the courtroom. He’s seated just behind the defense table and can be seen over Raymond Burr’s shoulder in some reaction shots. Submitted by FredK 7 October 2010.

Character Names: Johnny Hale’s middle name is Davis. Submitted by gracenote, 9/2/2011.
+ Speaking of Murray Hamilton as Johnny Hale, I knew I had seen him in something else...I think he may be best known as the egotistical mayor Larry Vaughn in Jaws (and Jaws 2). Submitted by mesave31, 04/22/15.
++ "The Case of the Repeated Surname": MH played Emory HALE in "The FBI: Ninth Man" episode ['68: IMDb]. Mike Bedard 8.11.16
+++ Hamilton was a murder trial witness in Otto Preminger's Anatomy of a Murder (which all PM fans should see), as well as Mr. Robinson in The Graduate. He was also in John Frankenheimer's Seconds and The Hustler. He was a fine actor, known for playing unpleasant characters. Submitted by Vladimir Estragon 9/27/2020.

Syndicated cuts: Lt. Tragg and Sgt. Grant arriving at the Crest Apartments, their conversation and Tragg noticing Mason's car; Tommy saying prayers and Sarah taking him to bed; Mason going to Hale's office, knocking and finding Hale alone, showing him the half photo and their conversation and Perry leaving [This edit makes it seem like Perry arrives at the club, fiddles with a light fixture and just barges in without knocking and making it seem strange that Hale does not comment on Mason's entering without knocking or why he is there.]; desk clerk Johnson's testimony [Johnson leaving the stand can still be seen in the edited episodes] and Burger resting his case;
Additional Hallmark cuts: scene of "Joyce" in Hale's office after Hale brings her there; Joyce's description to Crane about nightmares being senseless and having no beginning or end; Mason asking Cora Dunbar about Reed's portrait; Crane recounting Helen's nightmare 25 years ago concerning a bread knife; Perry's question of Hale concerning custody rights, Burger's objection and the judge telling Hale to ignore the question; Burger stipulating to Dr. Maitland's qualifications; reaction shots from witnesses when Mason asks Helen to try an experiment; Helen telling Dr. Maitland how frightening and difficult it is to be accused of things you didn't do and Dr. Maitland saying she's coming along splendidly. Submitted by Wiseguy70005, 7/19/12.
+ I stopped watching the syndication ones on MeTV given they are chopped up so much. Once you see the full uncut, you real how much "ambiance" that is being left out. Submitted by Perry Baby 12/5/14.
++ I just finished carefully watching this episode on MeTV on 29-30 October, 2020. All but one of the scenes listed as Hallmark cuts were in place, and two of the listed MeTV cuts were back in place as well: the prayers and the business with Mason and Hale before Perry barges back in and finds Joyce in the office. It seems that MeTV may be butchering the episodes a little less and may be OK watching. BTW: the description of a Hallmark cut which ends with the judge telling Hale to ignore the question has the lawyers reversed - Burger questions and Mason objects. :-) OLEF641 10/30/2020

Burger correctly identifies the murder weapon as a "Colt .45"; more specifically it is a Colt Pocket Positive,made until about 1940. Submitted by SteveP
+ You must mean incorrectly on the .45 part as the Colt Pocket Positive is a .32 caliber. Submitted by HamBurger, 9/9/2017.
++ Actually, at 31:02, Burger CORRECTLY identifies the gun as a Colt.32, when he shows it in court and says, "This is the gun that killed [Spoiler Name]. It's a .32 Colt revolver." Submitted by catyron, November 26, 2020.

It's for you, Mr. Mason: It's always a special moment when someone tracks down Perry in the field. This time he's cooling his heels at Reed Industries when Della finds him. Submitted by francis, 6/09/14.

Denver Pyle makes the first of six appearances on Perry Mason including the final episode: TCO the Final Fade Out. Submitted by Perry Baby 12/5/14

During Perry's first meeting in his office with Helen Reed and Robert Crane, there is a set of law books on the shelf behind Perry, the book nearest Perry (seen over his right shoulder) is turned upside down. An upside down book is shown again in the epilogue scene in episode 179, TCOT Skeleton's Closet. jfh 11May2017.

This is the first of seven PM episodes for British-born film and television director Andrew V. McLaglen...MikeM. 8/10/2016

This is the first of two PM appearances for Illinois-born Carole Mathews who, according to IMDb, had an uncredited movie role as a dancer in 1935 when she was fifteen. Carole Mathews passed in Murrieta CA in 2014 at the age of 94...MikeM. 5/23/2018

The first of three appearances for Abraham Sofaer. Born in Rangoon, Burma, Sofaer was most noted for his deep, melodious voice. A prolific character actor, Sofaer may be best remembered by television audiences for playing the leader of the Kyban in the Outer Limits classic, Demon with a Glass Hand. However, his most memorable movie performance may have been as the heavenly judge in A Matter of Life and Death. Submitted by Kenmore 09/21/2020.

This is one of my least favorite episodes. Joyce Martel is loud, obnoxious, brassy, and thoroughly unlikeable. Submitted by PaulDrake 33, 12 July 2008.

I also don’t care for this episode. The Joyce Martel character was too over-the-top. But, I suppose that’s what the script called for. Actually, something like what Constance Ford (who played Reed/Martel) did in “Potted Planter” would have worked. It’s a shame, too, because Abraham Sofaer is such a joy to hear. Submitted by billp, 1/18/2009.
+ Among his 139 IMDb credits, Burma-born Abraham appeared in 3 Perrys, 2 Time Tunnels, & 2 Star Trek VOICE roles (Spectre of the Gun, Charlie X). Mike Bedard 4.21.15

A small plot inconsistency: At one point mid-episode, Dr. Maitlan tells Perry that Helen Reed has “only recently” learned of Joyce Martel. But in the epilogue, Della says that Helen didn‘t know of Joyce at all! Submitted by Ed Zoerner, 5/18/2009.
+ But I was *just* watching the scene on MeTV where her brother tells Perry and Tragg (in Perry's office) that Joyce Martel was her sister's make believe/made up character as they were growing up, but I guess the point was that she did not know what Joyce actually did. She described what she experienced was like a "dream"/not real to her. Submitted by mesave31, 04/22/15.

Another inconsistency?: At about 30:20 on the 2006 Region 1 Paramount DVD, Dr. Maitland tells Paul that "Helen Reed doesn't smoke or drink. Joyce does both to excess." Given that both personalities are in the same physical body, why hasn't Joyce developed at least a craving for nicotine? (I wonder if the tobacco and alcohol companies are suppressing this method of abstinence.) Submitted by (lowercase, with a comma and period) masonite, 07/22/13.
+ Helen has an extreme allergy to fur, which is a physical reaction which has not transferred to Joyce, so it's possible that Joyce's nicotine habit has not transferred to Helen. jfh 04Jun2019
++ I don't have a problem with the nicotine/alcohol usage, but I do with the fur allergy, in that allergies are physical responses. If one personality doesn't drink or smoke, how would they know that is what they are craving? Having [assumedly] never smoked, would Helen one day feel a bit strange and think "Wow, I am really craving a cigarette?" —yelocab 15NOV19
+++ There are actually people out there who do not become addicted to cigarettes. The medical industry calls them "chippers"; My mom's best friend was one, so I know they're real. If others around her were smoking, like at a party, she'd light up too, but never any other time. It's a bit of a stretch, but maybe Joyce/Helen was one of these? OLEF641 10/30/2020

Unlike previous commenters, this is one of my favorite PM episodes! I think Constance Towers does a great job portraying both women, and the courtroom transformation is well-done. I definitely would have liked free-wheeling Joyce more than prissy Helen. Actually, lowercase-masonite, I have less problem with the 2 personalities having different craving for nicotine and alcohol than with the fur allergy--allergies are a physical thing, a reaction of the body to what it mistakenly thinks is an invader, I (allergic to horses) don't think any mindset could override that reaction. submitted by DyNama, 4/7/2014. + I have a problem with the fur allergy as well: I could see being allergic to a specific fur, but just "fur" in general seems implausible. The online literature on this is somewhat lacking, but what there is suggests that such is often an allergy to dander, proteins or saliva on the fur rather than the fur itself - which would presumably exist only on a living animal, not a pelt - so all of this IMHO suggests the allergy is psychosomatic...a manifestation of her repressed nature. Diagnosed (without a license) by Notcom, 083117.
++ Just watching The Three Faces Of Eve and, similar to the Joyce/Helen character, one of Eve's personalities (Eve Black) is allergic to nylon while the other personality (Eve White) is not. [see comments by JohnK below] 01Oct2019

I'm split over this episode -- the Joyce character is certainly enthusiastic, but not completely implausible (she reminded me of my second wife after she had had a few drinks). But I thought the courtroom scenes were pretty good, especially at the moment when she flips from Helen to Joyce. JohnK, 2 December 2015

I think this is the first episode that is not taken straight from an E.S. Gardner story. It seems they wanted to ride the coattails of Three Faces of Eve, which was released a year earlier. JohnK, 2 December 2015

Just as this episode was likely inspired by “Three Faces of Eve”, I suspect “TCOT Lonely Heiress” was inspired by “A Kiss Before Dying”, and “TCOT Silent Six” was inspired by the infamous, and infamously misunderstood Kitty Genovese murder. Can anyone come up with other episodes inspired by contemporary books, movies, or incidents? DOD 06/17/20

In the opening scene, it is obvious that secretary is just mindlessly tapping at the typewriter keys, and the sound of the keys does not match her finger action. DOD 06/17/20

Why haven't we heard from DellaFan on this epilogue? Della does a wonderful model's spin at the end and is definitely purring! Wow! Submitted by DyNama, 4/7/2014.
+ Great minds think alike, DyNama! She looks terrific! DellaFan, 4/8/2014.
++ I was referring to a comment DyNama had made--now (for some reason) gone--about how foxy Della looked at the end of the episode wearing the fur. DellaFan, 4-22-2015.
+++ Don't know why it went missing! Don't know why my signature links to a non-existent profile either. DyNama 9/30/2015

In the epilogue, Perry instructs Paul to return the fur to Robert Crane. Paul should return the fur to its rightful owner, Helen Reed. jfh 04Jun2019
+My guess is that Helen is in a sanitarium or otherwise under intense treatment with her brother as guardian or helper. Or maybe he looks better in mink than she does? Fred Flintstone 12/16/2020

Wrong Street: When questioning John Hale, Mr. Burger asked if he had visited Helen (Joyce) at her apartment on Waverly Place. Joyce lived at the Crest Apartments at 622 S. Barry. Submitted by H. Mason 4/23/15

"Alternate" a 2007 episode of Law and Order - Special Victims Unit dealt with similar topics. They called it "Dissociative Identity Disorder". Submitted by H. Mason 4/23/15
+As with most psychiatric disorders, the name has changed over the years, from Schizophrenia to Multiple Personality Disorder to Dissociative Identity Disorder. It depends on what edition of the Diagnostic and Statistical Manual of Mental Disorders you are reading. Submitted by Vladimir Estragon 9/27/2020.