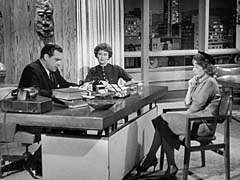 From The Perry Mason TV Show Book (Revised)
After spending a bitter year-and-a-half in jail for a crime he did not commit, Martin Ellis is exonerated, thanks to evidence that his wife received in the mail. Charles Brewster, the real thief, is justly sent to jail for stealing the $300,000 in question, but manages to get out on bail. When Brewster later turns up dead, guess who is the prime suspect? It’s a good thing Martin Ellis has Perry Mason on his side this time around.

CARS: 1958 Ford Thunderbird convertible, black, top down. From The Cars by Greg Cockerill.

Look for the black actor and director Frank Silvera playing lead Jonathan Hyett—a somewhat daring situation in 1958. Submitted by Karl Eggert, 5/7/05.
+ Actually, according to Wikipedia, Frank Silvera was not "black", but rather he was born to a mixed-race Jamaican mother and a Spanish Jewish father. jfh 10Jul2019.
++ Whether or not you can decide for him if he identified as Mixed Race, Mulatto, or Negro during his lifetime, it is pretty obvious from his skin tone, even in black-and-white film, that then or now he would be identified as a Person of Color. And, yes, that was rather daring in 1958. As for how be thought of himself, according to Wikipedia, "In 1964, Silvera and Vantile Whitfield founded the Theatre of Being, a Los Angeles-based theatre dedicated to providing black actors with non-stereotypical roles. One of their first projects was producing The Amen Corner by African-American writer James Baldwin. Silvera and Whitfield financed the play themselves and with donations from friends. It opened on March 4, 1964, and would gross $200,000 within the year, moving to Broadway in April 1965." In fact, i think that the veiled threat that Charles Brewster made about the "skeleton in your closet" -- which would somehow embarrass Hyett's daughter, and the mention of which caused him to back down to Brewster's bullying, may refer to Hyett's status as a mixed-race father of two "white" members of high society, in other words, a man who is, to use the lingo of the time, "passing for white." Submitted by catyron, December 22, 2020.
+++ If Silvera asked for a motel room in the Jim Crow south, I don't think there would be a debate whether he was really black! This show aired during the nascent civil rights movement; would have been cool if PM had more black actors AND characters. Rick P 10/6/21

Strange casting. Frank Silvera, an African-American actor age 44 at that time, is cast as the father of Joan Banks, a light-skinned strawberry blonde age 40 at that time. (Joan Banks looked every bit of 40 by the way). Submitted by PaulDrake33.
+ This actually caused some confusion for me while watching the show--as he kept referring to his daughter, and I had to remind myself that the wife of the victim was his daughter. During the final scene, in the close ups, I thought: he is too young to be her father. --yelocab 20NOV18
++ And Ralph Clanton, who plays his son, is the same age as Frank Silvera! And it shows, in all three cases. Perhaps the most extreme example of miscasting as to age in any episode. Submitted by JazzBaby, 8/5/2019.

Joan Banks plays almost exactly the same character that she played in Episode 12, “TCOT Negligent Nymph,” the alcoholic wife of the murder victim—a woman who cannot function without a drink in her hand. Submitted by PaulDrake33.
+ For the second episode in a row, we have an unhappily married couple. Submitted by Duffy, 5-14-2014.
++ Ditto, Perry praises Hamilton: "That won't affect Mr. Burger; we've had our differences, but you can't accuse him of playing politics." Mike Bedard 6.8.16 MeTV viewing.
+++ Which is an interesting statement by Perry considering the fact that District Attorneys in California are elected, thus making DAs politicians by definition.

Why do most of these people live in Victorian mansions. What that so common in the 50's? Submitted by Perry Baby 2/1/15.

When Squires is in Mason’s office, Della dials a number for him. She dials seven digits, whereas in previous episodes when people dialed a # they would dial only five numbers. Submitted by Craig, 3/25/10.
+ In 1958, the year this show was broadcast, Ma Bell had just started to implement 7-digit phone numbers and All-Number Calling, especially in larger cities. In some rural areas, even into the 1980s and 1990s it was not necessary to dial the full exchange (the first three numbers). Submitted by gracep, 1/17/2011.

Sightings: Seated in the back row of the courtroom gallery on the defendant’s side is the Little Old Lady in a Hat who also appears in the opening credits. Quiet Old Man #1, Distinguished Gentleman #1, and “Miss Carmody” appear on the prosecutor’s side. When court reconvenes the next day, however, we find that all four of them have switched sides. These are some of many recurring spectators that are fun to spot. Submitted by gracep, 12/16/2010.
+In court we find the Distinguished Lady #4 next to the LOL #1. Submitted by BigBill767, 2/4/17.

Syndication cuts: Brewster driving up to the Hyett Building; a mailman delivering a package containing microfilm to Carolyn Ellis and Carolyn opening a phone book; Newspaper headline "Brewster Free on Bail" as Carolyn prepares dinner for Martin who makes a drink and goes out to get more liquor; Della and Paul are told by Mason that they have half the day ahead of them and Paul reports he couldn't discover anything about the microfilm; Mason calling Mrs. Brewster, Richard Hyett saying she can't come to the phone because she's sick and attempts to get her to quit drinking. [Note: the scene with Mason, Della and Carolyn in Mason's office before Paul arrives detailing the business of Hyett, Brewster and Hyett and that the fraudulent bills disappeared before Martin's trial reported missing from the CBS/Paramount DVD is included in the syndicated version.] Submitted by Wiseguy70005, 8/01/12.

Wrong name: Actor Harvey Stephens was billed as Victor Squires in the credits. The name on the envelope mailed to him was Lawrence Squires. Submitted by H. Mason 10/14/14

Same apartment: The establishing shot of the Shane Apartments was the same one used for the apartment building where Paul found Inez Kaylor after she was threatened and left the courthouse in episode 29 TCOT Hesitant Hostess. Submitted by H. Mason 10/14/14

Possible Goofs
(1) Seems to me the murder victim, Charles Brewster, moves his fingers as the gun is put into his hand by his father-in-law.
(2) As Perry is looking through the tin box for the share certificates, in Mrs Ellis' apartment, there is a metallic clanging sound. I thought perhaps that Perry had shaken the box at that moment but he is holding it steady. Clothears, 5th Jan 2020.
+ If you look carefully, you can see that Perry’s left hand, the one holding the lid, moves. It apparently banged the handle against the lid. There is a similar sound when Paul pulls the box out of the cabinet and tosses it up slightly. OLEF641 12/4/2020

It's not too surprising that the progressive producers of PM cast the partly ethnic-African, Frank Silvera, in an important role as a "White" man. According to Wikipedia, Silvera's mother was a Jamaican of African descent, but his father was a Spanish Jew. Wiki says that, on the stage, the versatile Silvera played the fathers of actors Ben Gazzara and Anthony Franciosa. He also played Mexicans and even a Polynesian. Tragically, Silvera was electrocuted, at age 55, while repairing a kitchen garbage disposal. As a World War II Navy veteran, he was buried at Long Island National Cemetery. Submitted by MikeM, 10/24/2012
+ Just to add to MikeM's comment above, noted Black Conservative Thomas Sowell said in a column that appeared a few years back in the Chicago Sun-Times, that he enjoyed both Perry Mason and Law And Order shows, but preferred Perry Mason because he thought that Law And Order was trying to teach him social lessons he didn't want to learn .. so the oddness of this episode, as well as the one with the Black actor portraying a judge (with no dialogue, yet) must have gotten by him. Or maybe not? Submitted by MikeReese, 9/4/2014

The Set for the Brewster home with that distinctive paneling was used in the previous show, ‘TCOT Purple Woman’. So who was Charles Brewster taking to Mexico City? Odd that Hyett was so angry about Ellis being wrongly convicted of embezzlement, but he was willing to see him tried for murder! When Hyett calls the police from the murder scene, there is a fireplace behind with distinctive squiggly andirons. Those same andirons are seen in Perry’s apartment. DOD 07/09/19

Where was Lee?: Burr stand-in and longtime supporting actor Lee Miller seems to have been away from the set for this episode, for the role of Sgt. Brice was filled by one Chuck Webster. Odd that for one episode they wouldn't just find another name for the sergeant in the script. Submitted by francis, 07/05/14.

Goof Burger announces his next witness will be "Mrs. Martin Ellis," but then proceeds to tell us she isn't legally his wife: he should refer to her either as "Mrs. Viktor Pulaski" or by her maiden name; (curiously, he continues the reference throughout her testimony, while Mason notes the inconsistency and does the opposite...thus each giving implicit support to the legal argument of the other). Observed by Notcom, 091516.
Well, he obviously had to use "Mrs. Martin Ellis" so as not to spoil the big reveal. Also, it is the name she had been using for several years, so it was the name she was commonly known by. I wonder what the legalities are, if she can be referred to in court by her alias, even if it is not her legal name.--yelocab 20NOV18

What happened to Carolyn?: This is another episode that is slightly frustrating. The last scene on many of the stories should have been used to mention the fate of some of the characters in the story. Carolyn was accused of helping Brewster embezzle the money. Wasn't she also guilty of withholding evidence? Was she charged with any crime? Submitted by H. Mason 10/14/14

+ Did I miss something? Why did Mrs. Ellis (I'm going with that name) send herself the microfilm that freed her husband? If she were going to kill Brewster, it would have made sense to set him up as the fall guy, but she didn't! Scratching my head.... Submitted by JazzBaby, 8/5/2019.

I find it odd that Tragg said he could not detain Hyett at the crime scene to be sure he was not involved (he was) or removing something from the crime scene (which he did). He had no cause? Hard to believe. Submitted by Perry Baby 2/1/15
I feel the same here. I would think that the police would at least wipe his hands (check for gunpower residue) and do a cursory search of him, just to eliminate him as a suspect.--yelocab 21NOV18
+ Remember: Tragg wasn't aware - officially anyway - that a crime had been committed...Hyett reported discovering a suicide. Implicit, too, in PM is that while the hoi poloi often had their rights trampled on in this period, the wealthy and powerful usually received more deference. Notcom 120420.