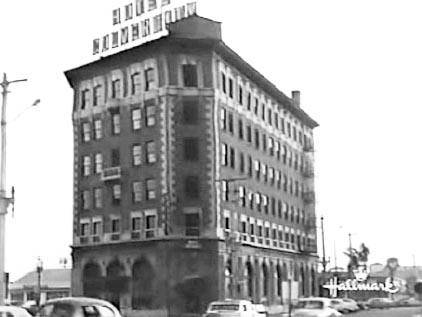 Seen briefly in episode #168, The Case of the Prankish Professor, and spotted by Eric Cooper, this hotel is famous. Here's the story Eric provided from the hotel's website:

Clark Gable, Greta Garbo, Joan Crawford, Red Skelton, Buster Keaton, Ronald Reagan and other well-known stars maintained part time residences within the classic walls of the Culver Hotel. It increased in fame as MGM began filming The Wizard of Oz when nearly all of the one hundred and twenty four "little people" spent four weeks at the hotel. Legend had it that a secret underground tunnel was built to usher the munchkins to their set at the Culver Studio. Wild tales and stories that emerged from these four weeks of filming helped to inspire the 1981 movie comedy starring Chevy Chase and Carrie Fisher called "Under the Rainbow." The producers actually used the Culver Hotel as a site for this fictional making-of-Oz story. Rumor is Charlie Chaplin lost the hotel in a poker game to John "Duke" Wayne.

Part and parcel with the rich history of the Culver Hotel is the even more enticing legends that surround its ownership. It has been said that the famous Charlie Chaplin once owned the Culver Hotel, but sold it to the "Duke," Mr. John Wayne, for a dollar in a poker game. Another tale is that Mr. Wayne was propositioned by the Black Panthers for ownership of the Hotel, but adamantly refused their offer, leading the Panthers to move their operations to San Francisco. Mr. Wayne later donated the Culver to the YMCA.

Red Skelton, another Hollywood mogul, is also rumored to have owned the Culver, though it was Lou Catlett, a general partner of Historic Hollywood Properties, who rescued it from real estate speculators who had allowed the hotel to deteriorate.

The Culver Hotel was restored to its original glory in the 1990s, with a renovation of the rooms that included individual baths and antique furnishings. The halls were hung with nostalgic scenes from old Hollywood and 1900s impressionist paintings, and the lobby and bar were retrofitted in early-1900s style moldings and dark woods.

Since the 1990s the hotel has undergone several new owners, finally landing in the hands of an independent family with plans on furthering the renovation in hopes of restoring the classic ambiance to the luxurious standards of its initial conception.

Legends and ownership, eclectic clientele and the passage of time have fostered a belief in a supernatural element within the walls of the Culver. Amateur ghost seekers often delight themselves in wandering the halls late at night, investigating thoroughly the paintings from old Hollywood and interviewing the employees with rigorous questions about scandals and tragedies.

So far the midnight apparitions have not made themselves available for candid photos or tape recordings, yet the question remains. Are the halls filled with the ghosts of the past or is the thirst for voices beyond the grave a mere figment of our imaginations? 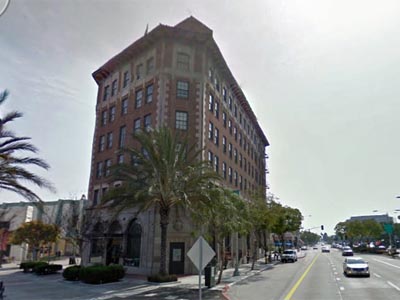