From Episode #224, The Case of the Blonde Bonanza

A Visit To Santa Monica

Early in the show, Della is seen at a restaurant with Dianne Adler. I think this is (was) the Belle-Vue Restaurant in Santa Monica. It's on the corner of Ocean Avenue and Santa Monica Boulevard. Built in 1936, its name comes from its great view of the beach. This intersection was the western end of Route 66 by the way. 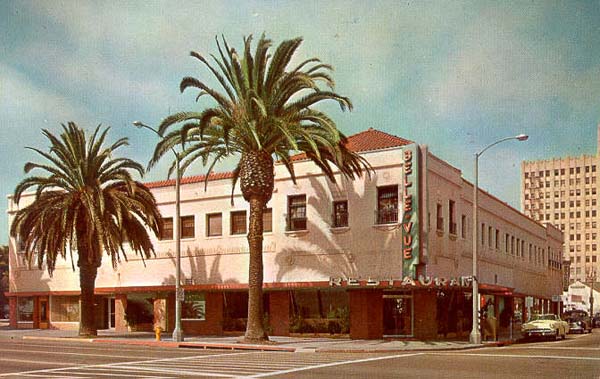 Here's a postcard view of the Belle-Vue from some years ago. Take note of the following features, right to left: The letters RESTAURANT on the edge of the roof, the two large, slanted windows with planter boxes below, the small window with letters above it and the entryway with angled walls, one with a planter in front of it. 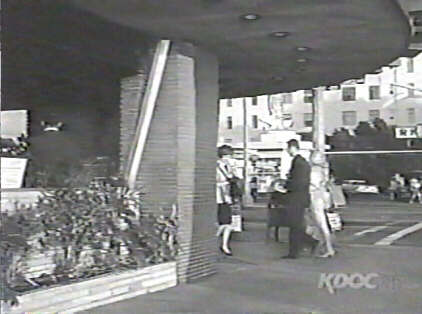 As Della and Dianne leave the restaurant, we get a good view of the first window and planter. 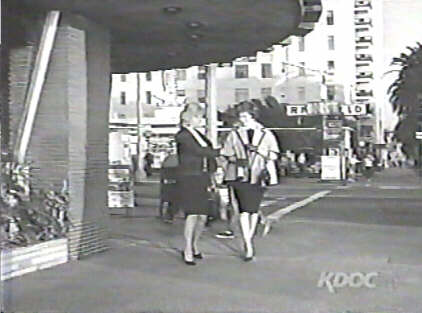 A little further out and we get a good view of the bottoms of the letters of the word "RESTAURANT" on the edge of the roof. 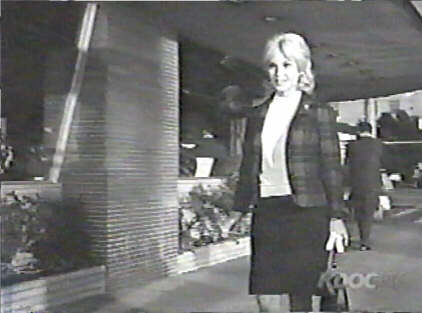 As Dianne makes her way down Ocean Avenue, we catch a glimpse of the second window and planter. 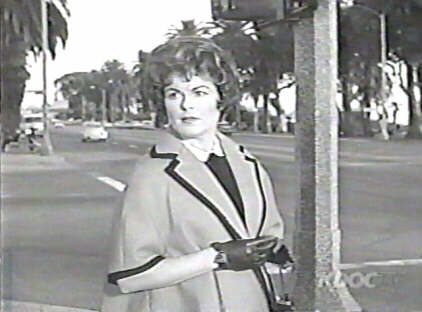 Della watches Dianne from the street corner with Ocean Avenue behind her and sees some nefarious activity near a phone booth. 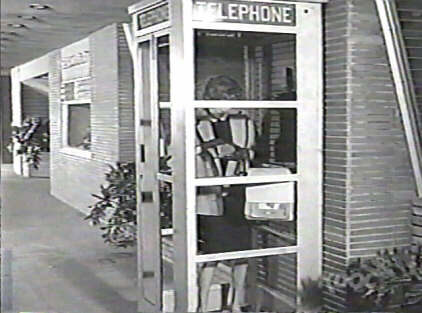 After the bad guys depart, Della uses the phone booth. It's between the two large windows, but it wasn't there when Dianne walked by earlier in the sequence. Cinematic magic I think. The plants are different too. They try to fool us, but, further on, we can see the small window with letters above it and the entryway with the angled walls and planter. 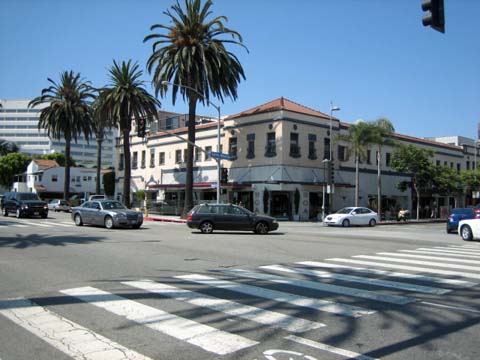 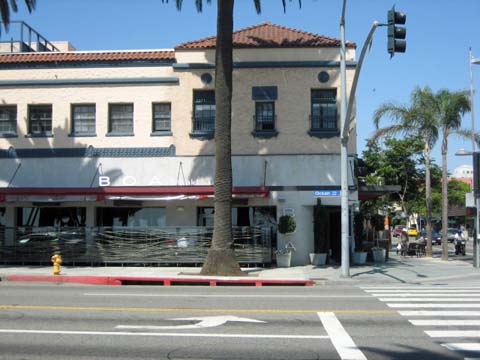 A closer view of the Ocean Avenue side courtesy Eric Cooper, 8/7/09. 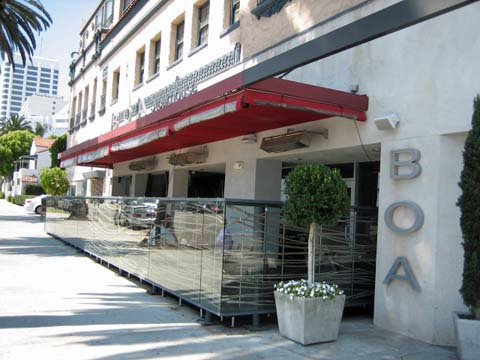 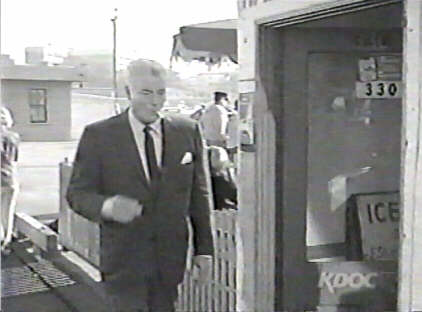 Here's Paul following Dianne to the Surf View Cafe. The "330" on the door agrees with the address of the joint: 330 Santa Monica Pier. 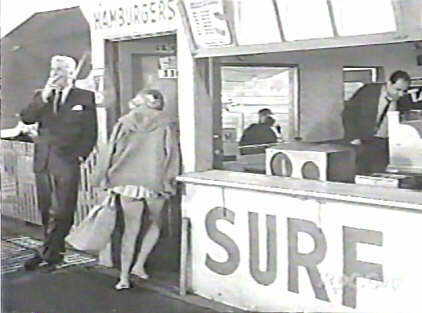 Out of sequence but a good view of the word "Surf." 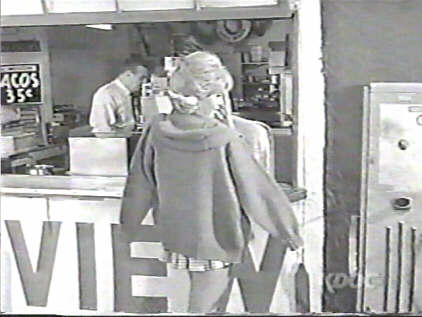 Earlier, the word "View" can be easily discerned. 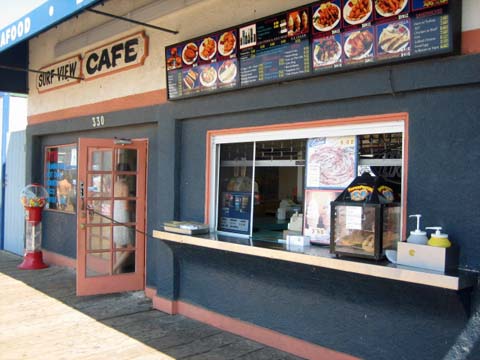 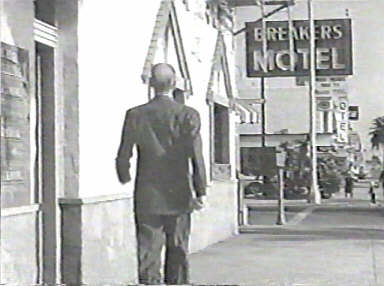 As Montrose Foster walks along, we spot the sign at the Breakers Motel, 1501 Ocean Avenue. The Bel-Vue restaurant is about a block behind him. The pier is about a block ahead and off to the right.

Here are a couple of shots of the neighborhood today courtesy Eric Cooper, 5/22/08. 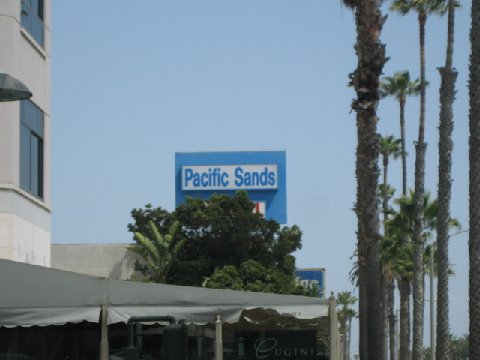 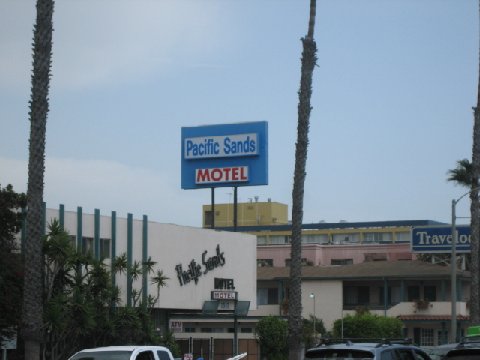