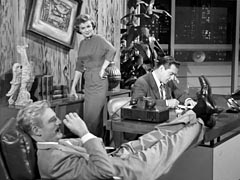 From The Perry Mason TV Show Book
Ed Davenport accuses his wife, Myrna, of poisoning him. He also claims to have written a letter to be opened after his death, that says that Myrna poisoned him. Myrna consults Perry, but when they learn that Davenport is at a motel, dying of arsenic poisoning, Perry works fast to cover for Myrna. When Tragg arrives to investigate Davenport’s death, the incriminating letter is out of sight—but so is Davenport’s body. Perry must buy time until he can prove Myrna’s innocence. Burger goes after Perry for tampering with evidence, but loses as usual.

Goof: A great blooper! Two of the main characters, Myrna Davenport and her cousin Louise, are in conference with Perry in his office. Louise turns to Myrna and says “Louise, that telephone call that came just before we left the house…Ed’s very ill….” Submitted by Rodney Pendell, 7/11/2002.

Continuity Error: The gauges on the oxygen tank in the motel room show pressure when Dr. Renault checks them. A few seconds later, there’s no pressure. Pictures here. Submitted by daveb, April 19, 2007.

John Stephenson was the voice of Mr. Slate, Fred's boss, on The Flintstones. Submitted by Mason Jar 10/7/2011

Edwin Jerome [Rath] Judged 2 Perrys: Purple Woman was the other ('58) [IMDb]. Mike Bedard 4.2.15
+ I am wondering if this is the same Ed Jerome who played Blackstone the magic detective on radio. Submitted by Wick 4/62022

Alfred Hitchcock Connection Adam Williams was on two AHP episodes, the earlier of which (Listen, Listen 1958) was coincidentally on this same night. Notcom, 081117.

Syndication cuts: Part of Mason and Della's conversation in the car about Perry being overzealous; scene with Paul and the motel manager with Beckmeyer watching them; the scene in Burger's office with Mason before Myrna leaves; scene with Louise and Beckmeyer outside the courtroom; Louise and Beckmeyer's conversation while Perry and Della are looking for a house trailer. Additional Hallmark cuts: Everyone walking out of Davenport's office building and Mason's conversation with Della in the car; the scene in Burger's office with Mason after Myrna leaves with Tragg's phone call about finding the body; at the gravesite, Burger offering Mason a no-death-penalty sentence if Myrna pleads guilty and accusing Mason of destroying evidence after he refuses; a couple of lines during Beckmeyer's testimony concerning Davenport drinking alcohol. [This changes the facts somewhat: In the original and syndicated versions, the poison was in the alcohol; in the Hallmark version, the arsenic was in the bacon and eggs.] Submitted by Wiseguy70005, 7/13/12.

Incorrect show summary: The letter was from Ed Davenport, not Myrna's uncle. Ed Davenport was never in a hospital. The envelope thought to contain the letter was found in Davenport's office as expected and turned over to the police. Submitted by 65tosspowertrap, 3-20-14.

It's for you, Mr. Mason: Always a special moment when someone tracks down Perry. In this episode, sexy secretary Rita Norge grudgingly hands Perry the phone in her boss's office when his wife calls from a booth. Submitted by francis, 5/25/14.
+ It's for you, Paul: Della answers a call in Perry's office for Paul. jfh 03May2018

Looks like some of Perry's law books made their way over to Davenport's office. Compare the stacks of books behind where Perry sits (@ 13:30) to the ones under the picture Della is hanging (@ 49:20) and the ones in the closing credits. Submitted by Wiseguy70005, 6/21/14.

Not a cut: At the gravesite scene, after Mason and Burger arrive, the music abruptly stops after the scene changes from a far shot to a closeup. If this were a syndicated broadcast one might think something was cut here. Submitted by Wiseguy70005, 6/21/14.

Perry runs in this one AND on a sloped hillside, when Della yells for him after she finds some tire tracks! Submitted by mesave31, 04/02/15.

Black and WHITE This is, I believe, the first time - and at any rate one of a very limited number of times - a physical description is given of Paul, and his hair color is described as "white". This was confirmed nine years later in the show's one color episode, but most people watching the show would likely have assumed he was blonde. Submitted by Notcom, 072216.
+ Not quite so. When Beckmeyer describes"Stokes", actually Drake, he describes his hair as gray, but driving a white sports car. So does Della when she repeats it to Paul. BTW young Della sure looks sexy in these early episodes and Paul agrees. Joe B. 03/12/2020
+ But Della sinks Paul's ego when she said she couldn't understand why Beckmeyer thought Paul was good looking. Submitted by HamBurger, 9/20/2020

This is the only PM writing credit for both Marvin Wald and Jack Jacobs...MikeM. 5/3/2018

Dr. Hoxie reports the deceased had .15% alcohol in his blood "enough to indicate the beginnings of intoxication". I guess they held their liquor better in those days. Joe B. 03/12/2020

Adam Williams, the shady PI, also played bad guys in The Big Heat and North By Northwest. He was a decorated carrier dive bomber pilot during WWII. He is credited with flying the biplane that chases Cary Grant in the famous scene in North By Northwest. DLH 5/27/20

The file cabinets have moved from Della's office to Gertie's office - the ones with individual drawers for the first twelve letters of the alphabet. Rita Norge drives up to the office, sees Perry inside, then runs off away from her car. A few moments later, she drives up to the office again. As with many episodes, this one has some pretty cavalier police work. They don’t bother trying to explain how Mrs Davenport could have removed her husband’s body and buried it miles away, nor do they show much interest in checking out the obviously shady doctor. The only episode I recall in which Perry remains seated while questioning a witness. DOD 05/28/20

Perry's desk: There have been some comments about the modesty panels being cheap hardboard pegboard. There is a good shot of the panels in this and some other episodes. I submit they a perforated ornamental sheet metal which would be much more appropriate.Joe B. 10/25/21

I enjoyed watching Della hang the picture. I think Paul did too. Submitted by DellaFan, 3/24/2014.

On the stand, Dr. Hoxie stated that Davenport had a blood alcohol level of 0.15% and there slightly inebriated. Today, 0.08% is considered inebriated so more than slightly and for an average man would be 4 drinks. This means Davenport had about 8 drinks and then he had breakfast. So did he drink alcohol for breakfast? Submitted by Perry Baby 10/28/14
+ "Well I woke up this morning and I got myself a beer" or was it a mimosa or tequila sunrise. 7-8 of them to go along with those bacon and eggs!!! Either that or he was still hung over or drunk from the night before and needed something greasy.... Submitted by HamBurger, 7/30/2017

I'm watching this one on MeTV and there is some sort of an "echo" at times throughout the show during various character's lines. It was surprising (and disappointing) to hear. I hope it was on their end and not the show's media itself deteriorating. Submitted by mesave31, 04/02/15.

Lt. Tragg too busy for Perry while filing his nails. Classic!!! Submitted by HamBurger, 7/30/2017

Why did Ed Davenport create such an elaborate ruse instead of just disappearing? Did he really believe he could frame his wife if there was no body to autopsy? And didn't it strike anyone as odd that a man who claimed that his hated wife, a woman he wanted to be rid of, was trying to poison him never went to the police? Also unresolved was Rita Norge's complicity in the scheme. Submitted by 65tosspowertrap, 3/20/14.

Hopefully, Myrna cut all ties with her manipulative cousin after the verdict.Joe B. 10/25/21

I thought it was a stretch that Davenport found the doctor in advance and then when faking the poison attempt the front desk was called and the front desk recommended Dr. Renault. I guess the front desk thought he was a real doctor too. Submitted by Perry Baby 10/28/14.
+"Quack," deriving from early Dutch, comes from "Quack" + "Salve" [Webster's Unabr. Dict.]. Mike Bedard 4.2.15
++ Dr. Renault was the "only doctor in the neighborhood". jfh 28Jun2022

Evil Twin? Beckmeyer's denials on the stand - the mannerisms, facial expressions, words ... even the cadence of his voice - are almost identical to those of the killer in TCOT Sleepwalker's Niece... just eight episodes earlier. Notcom, 092719.
+ He reminds me, in voice and appearance, of a young Jack Weston. jfh 28Jun2022