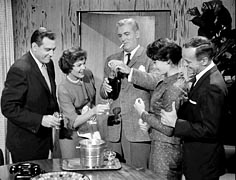 From The Perry Mason TV Show Book (Revised)
Murder as a three-ring circus. A famous clown named Felix is secretly married to a woman who is pretending to be married to the owner of the circus they both work for. When a struggle for control of the circus breaks out, the clown comes to Perry for advice.

Paul, Perry, and Della go to the circus and are surprised to see Lt. Tragg is also attending. (What are the odds?) During the performance the horrified onlookers see a clown shoot and kill one of the circus’s owners in the middle of the act, then run from the tent. When Felix is later charged with the murder, Perry has to figure out who was really in that clown suit.

Ken Curtis makes his only Perry appearance here playing Tim Durant. Most people remember Ken Curtis as Deputy Festus Haggen for 16 years on Gunsmoke. But previous to his stint as Festus, Ken Curtis was a member of the western singing group The Sons of The Pioneers, who were fronted by a pretty famous singing cowboy, Roy Rogers. Submitted by PaulDrake 33, 28 July 2009.
+ Ken Curtis first portrayed Festus in a 1962-63 episode of Gunsmoke (after guest starring in four different roles between 1959-60), then played a different character in an early 1963-64 episode before returning to the Festus role in a later 1963-64 episode at which time he began to appear regularly. Even counting the first Festus appearance he would only appear in the role for 13 years. Submitted by Wiseguy70005, 4/23/14.
++ I'm surprised no one has mentioned how coincidental it was that the name of the circus is Curtis/Franklin Circus, and Ken Curtis is in the cast.Submitted by Arisia, 03/08/18.

The act before Heidemann the Clown is a husband-and-wife act called “The Gilberts.” The act consists of shooting objects with live ammunition inside a tent full of spectators. At the conclusion of the act, Tony Gilbert shoots a pistol directly at the crowd. There is only a small board to stop the bullet. No wonder all the circuses are out of business today. Submitted by PaulDrake 33, 31 July 2009.

Sightings: The ubiquitous Little Old Lady in a Hat makes one of many appearances in the courtroom gallery, as does Quiet Old Man #1. The former sits behind the Gilberts and the latter behind Lisa Franklin. Read more about these and other favorite frequent faces. Submitted by gracep, 10/20/2010.
+ Miss Carmody and Distinguished Lady #4 join the LOL in the back row of the court. Bill767, 1/3/16.\| + At the circus, sitting right on the front row and applauding, is a smiling “Miss Carmody”—in front whom walk Perry, Della, Paul, looking for their seats. Then as the clown is performing, we can also see (way in the back row) Little Old Lady #1, who later attends court (see item above). Never seen her so animated before! Submitted by gracenote, 6/28/2011. More here.
+ Also viewing the circus acts we find the Pencil Mustache Man in the back row; the Quiet Old Man in the front row with a hat; and Sasha Magaloff (hat and glasses), Little Old Lady #2, Distinguished Lady #2 in the middle rows. Bill767, 1/3/16.

Uncredited Actors: Robert Wegner appears in the crowd at the circus, though he looks no happier than usual. Submitted by FredK, 19 November 2010.

The music playing while Perry and Tragg examine the body is Stephen Foster’s “Camptown Races” (doo-dah, doo-dah). Submitted by gracenote, 6/28/2011.
+ This song is also used in “TCOT Drowsy Mosquito." (see gracenote’s item there) Submitted by cgraul, 9/26/2011.
++ Just as Tragg starts to speak, the music segues into "Listen to the Mockingbird". Submitted by OLEF641 11/28/16.

+ Also heard in this episode was music composed for The Twilight Zone episode "A Stop at Willoughby" by Nathan Scott (broadcast exactly 6 months before the Perry Mason episode in mid-1960). It can be heard @7:33 as Curtis blows out the candles on the cake, @22:24 with the newspaper headline and other times. Coincidentally (or not) the same stock music from the CBS music library of "Camptown Races" (mentioned above) and "Beautiful Dreamer" (heard during the Gilberts' performance) can be heard in that Twilight Zone episode as well. The complete "A Stop at Willoughby" score can be heard on the vinyl album The Twilight Zone: The Original Television Scores Volume Two (Varese Sarabande STV81178). Also included in the 12:27 track are "Camptown Races" and "Beautiful Dreamer." Submitted by Wiseguy70005, 4/23/14.

The same glitch/edit seen in the opening credits of the previous episode "The Case of the Wandering Widow" can be observed in this episode as well when the words "In the case of" appear onscreen. Apparently it was fixed after this episode. Submitted by Wiseguy70005, 4/23/14.

Vanishing Girl: I'm surprised that nobody has said anything so far about the girl in the row behind Lt. Tragg's seat at the circus. As Tragg started for the seat there was a girl sitting in the next row. When he sat down she was gone. She reappeared when Lt. Tragg and Perry got up to investigate the shooting. Submitted by H. Mason 11/3/14
+ She also doesn't know where to look. When the clown approaches Paul, Perry and Della and aims the gun at them, everyone is looking at the clown. Then in a closeup of the crowd while everyone is still looking at the clown, the girl is instead looking off to her left and begins to laugh with the crowd even though she isn't looking at the clown. When the shot returns to show the clown the girl is immediately looking forward. Submitted by Wiseguy70005, 1/14/15.

This is the second of six PM appearances by Douglas Henderson...MikeM. 8/22/2016

This is the third of four PM appearances for Maggie Hayes, who played Dora Hand in three episodes of The Life and Legend of Wyatt Earp...MikeM. 11/28/2016

The newspaper article claims 4000 people witnessed the murder. I'd say there were no more than 200 in the audience. Submitted by Kilo 8/13/2017.

TCOT Curious Coffee Set: The cups and saucers are not in evidence, but a couple of small plates from the Curious Coffee Set are on the tiny table where the despondent 4th anniversary party is being held. Submitted by catyron, February 26th, 2021.

This episode features one of Paul’s trademarks, taking notice of a lovely lady. When, at around :45, Paul follows Perry from the ring area of the circus tent into the performer’s dressing area, a “lovely lady” in very tight shorts passes by. Paul nearly twists his head off to look at her “assets.” Submitted by Kenmore, 11/10/2009.

Perry asks "was there anything about the act that struck you as unusual, some missing characteristic, something left out of the routine?" Yeah. It wasn't funny. I saw no evidence of "genius" in the routine. In fact, the entire episode laid an egg. Not up to the usual Perry standards. Lisa unlocking the cage is incredibly stupid, even for a drunk. And Perry asks if everyone knew that Jerry was afraid of the wild animals. Uh, isn't EVERYONE afraid of wild animals? And why would there be only one bullet hole in the top of the tent? When the husband and wife team shoot at the quarters, wouldn't the bullets continue traveling upward and make holes in the tent? And if not, if the bullets ricochet and go somewhere else, isn't that a bit dangerous? As Paul Drake noted above, the gun act is absurdly risky. And why is everyone swiping Della's popcorn? Get your own! This episode should've been named "TCOT Stinky Script." Submitted by scarter, 8/24/14

+ I agree with scarter - surely one of the more dopey episodes. However, I am a writer, and understand that new script ideas and motivations for doing in one's spouse, partner, stepfather don't write themselves -- one a week! Maybe the odd circus motif was already set up and available. JohnK, 4 October 2015 ++ Gloomy and claustrophobic. It's the only episode i started to watch a second time on DVD and bailed on it. Submitted by catyron, February 26th, 2021.

+++ At about the time this show aired, I was a boy of maybe 6 years, and strongly recall visiting, with my father and younger brother, a small-time traveling circus like the one in the episode. Even then I sensed that the whole thing was shady and downtrodden and depressing. This really was an odd choice of setting. JohnK, 20 October 2021

A clunker, vindicated only by some fine performances. Felix, Judd, and Tim surely are the glummest, least likely trio of clowns. Odd that this, one of the worst shows in the series, should immediately follow one of the best - “Wandering Widow”. Douglas Henderson is best remembered for his role in "The Manchurian Candidate" with Frank Sinatra. DOD 09/07/18

Another episode in which Perry enters his office via the law library door, which strikes me as odd because a.) it's the long way (from the hallway into the reception area, then into the law library, then into his office), and b.) he has no idea there's someone waiting in Della's office, so why the detour? It would have made more sense if he'd just entered by his private door to the back hall. Submitted by francis, 9/01/14.

In most episodes the law library is through a door to the right of that bust. And in at least one other episode, the door to the left of the sofa leads to a bathroom. Maybe Perry was freshening up? DOD 10/05/20

+ Is there an automatic door closer on that door? When Perry enters his office he leaves the door open. The door seems to stay in that position but a couple of seconds later we hear the door close. The next time we see the door it is closed. Was the mysterious "doorman" from episodes 12 and 30 here as well? Submitted by Wiseguy70005, 1/14/15.

Am I right in presuming that the authors of this episode want us to believe that Jerry Franklin could fire his loaded gun at the exact same instant that the clown Tim Durant fired his, so that no one - not even those standing next to his wheelchair - heard two separate shots? - Submitted by 10yearoldfan, 1/18/2012.

If you look closely, Franklin is sitting by himself. Then, when the Gilberts came up closer to him, he rolled his wheelchair closer to the action, and away from Mrs. Gilbert, probably to get a better line of sight to kill Curtis as well as getting further away from both of them.

So it's entirely possible that no one else heard Franklin's shot, or, if they did, they only thought it was an echo. From the perspective of the Gilberts, both shots came from in front of them, so, based on that, it would've very difficult for either of them to have separated the shots because both shots came from the same direction.

Except Jerry would have had to raise the gun to chest height - surely someone would have noticed. DOD 09/07/18

TCOT Inept Investigation Tragg and his men left the supposed murder weapon lying around at the circus, allowing Durant to fetch it later and throw it on the highway to frame Heidemann. What kind of police work is that? Oh, well. As others have commented, this is not PM at its best. It is one of my least favorite episodes, dark, muddled, unpleasant, full of miserable characters and unbelievable moments. And one of the unfunniest clown acts imaginable. Can't win 'em all! Submitted by JazzBaby, 9/1/2019.