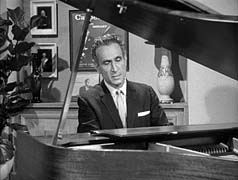 From The Perry Mason TV Show Book (Revised)
A washed-up, lovesick concert pianist takes a dive in his car over a cliff. Insurance and financial woes complicate the matter. Perry must clear the pianist's protégé of any suspicion.

In the office scene where Perry is dictating to Della from a book, when he says “California State Penal Code, section 1362, dealing in competency as evidence when witness uh...,” he is speaking of an actual and appropriate section of the CSPC. Submitted by Steve Fox, 10/20/2004.

+ Goof: Right after the above scene Perry closes the book with an audible thud, picks up the newspaper while putting the book down with his left hand and holds the newspaper with both hands. When the camera switches to a front view we hear what sounds like the thud of the book closing again and Perry has his right hand below the screen apparently putting the book down again. Submitted by Wiseguy70005, 5/13/14.

Music:The piece playing at the episode’s opening (with Carpenter at the piano) is Beethoven’s Sonata in C minor, Op. 13, No. 8, also called the Sonata Pathétique. The closed captions coupled with the syndication print incorrectly list this as the overture from Beethoven’s Fidelio. Submitted by gracep 10/21/2010.
+ The closed-captions on the DVD simply state "(piano music playing)" and later, "(classical piano music playing)." Submitted by Wiseguy70005, 5/13/14.
+ See also comments below regarding Donna’s piece.

Sightings: Appearing in the courtroom gallery are Distinguished Gentleman #1 and the Little Old Lady in a Hat on the defendant’s side, along with Quiet Old Man #1 and “Miss Carmody” on the prosecutor’s side. A pencil-mustached man peers through the crowd as well (prosecutor’s side). Can you see them? Read more about these favorite frequent faces and why we are trying to spot them. Submitted by gracep, 10/21/2010.
+ Sitting next to DG #1 we find Distinguished Lady #4. Bill767, 1/3/16.

Uncredited Actors: Robert Wegner gets two appearances in this episode. He's a frowning spectator on the prosecution side, and he seems to be a uniformed policeman at the desk outside Tragg’s office when Tragg, Mason, and Worthington meet. Submitted by FredK, 20 Nov 2010.
+ Don Anderson is among the second-row spectators on A.D.A. Chamberlin’s side of the court. Submitted by FredK, 20 Nov 2010.

Where's Paul?: After Perry took Donna as a client he never used the services of the Paul Drake Detective Agency. Submitted by H. Mason 11/3/14

This is the only PM appearance for Cindy Courtland, who appeared in the Swiss nudist travelogue Lust For The Sun...MikeM. 11/29/2016

The first of two appearances by Robert Lowery. His most famous role was as the Caped Crusader in the 1949 Batman and Robin serial. Submitted by Kenmore 10/08/2020

When Perry visits Donna just ahead of Tragg, she is playing a classical piece on the piano. Perry can’t “quite place it.” Later, Perry writes a note to Donna in jail and comments to Della that “I just remembered the title to a beautiful Beethoven overture.” The title in the note looks like “Fidelis” but it's “Fidelio” (compare the “o” to the “s” above) as is confirmed in the closing scene. Now, Fidelio is an opera and does have an overture, but isn’t this an odd piece for piano solo? So what was Donna playing? Submitted by Steve Fox, 10/20/04.
+ The music misidentified as Fidelio in the first scene, with Carpenter at the piano, is definitely the first movement of the Sonata Pathétique. In the scene Steve mentions, the closed captions claim Donna is playing an arrangement of Fidelio, but it sounds like no part of an orchestral recording I have reviewed. Lastly, as Perry Mason writes his note and Donna reads it, I cannot recognize the music playing as from the Fidelio overture, either. Submitted by gracep, 10/21/2010.

Why were Donna’s fingerprints on the flashlight, not Anita’s? And will the insurance company pay off? DOD 10/06/20
+ I'm guessing that Anita was wearing gloves, as all well-bred older women did then. Originally all well-bred women wore them, but the practice was beginning to "age-out" by then. OLEF641 3/30/22

When Mason visits Donna in the cottage and remarks on her gifts, though he cannot name the piece, the music heard is a piano version of one of Beethoven’s Leonora Overtures. Since Beethoven was not especially comfortable writing for voices, he composed only one opera, Fidelio, and labored on it for some time. He wrote three different versions of the original overture which are now known as Leonora Overtures Numbers 1, 2 and 3 (Leonora was the heroine of the opera who disguises herself as a boy, Fidelio, to help her imprisoned husband). After all this effort, Beethoven eventually composed a completely different overture for opera performances. The Leonora Overture #3 is a well-known concert piece and is also sometimes played between acts of the opera; #2 is rarely played, #1 very rarely. The section Donna plays could be from either #2 or #3. Technically, therefore, Mason is incorrect identifying it as Fidelio. Submitted by FredK, 20 Nov 2010.
+ It is actually the Leonore Overture #3, which was one of the overtures Beethoven wrote for “Leonore”, before he revised that opera into “Fidelio”; Leonore #3 was often used as an entr’acte between the last two scenes of “Fidelio”, probably because it is an absolutely sensational piece of music.

“Leonore”, The original form of the opera Fidelio

Curious that when the big, hulking stranger walked uninvited into Donna's cottage, and sat right next to her, that she didn't scream or run away. Submitted by (lowercase, with a comma and period) masonite, 02/20/19.

Several times, while Perry wrote the name "Fidelio", I closely watched the movements of his right hand (using one of those wonderful Parker 61 desk pens).
I also looked closely at the name on the paper.
I feel persuaded that the final letter, as Perry wrote it, is truly an "o" rather than an "s".
Submitted by DocRushing on 15 September 2012.

On the note itself, What everyone is thinking is an 's' at the end COULD BE an 'o' with no tail. Some forms of cursive writing taught students to eliminate the 'hanging tails' at the end of a word. If you look closely, it doesn't have a sufficient enough bulge to be an 's', but it IS round enough to be an 'o'. Submitted by Arisia, 03/09/18

The correct way of spelling protégé is with an acute accent above each e. The title on the episode features none (although the DVD and DVD jacket does). Also the feminine form of the word (the protégé of the title is a female) is protégée. Submitted by Wiseguy70005, 5/13/14.

A rare episode with a jury, but so little is seen of them, why bother? Odd that Worthington wasn't put on the stand - he could have cleared up the case in no time. DOD 09/10/18

About halfway through the episode, Perry is at a lunch counter (waited on by demurely dressed Alice) and reading a Los Angeles Chronicle article. Its headline is "Hearing Set in Carpenter Murder". Per the caption below Carpenter's photo, "Donna Ross, beautiful protege of the late David Carpenter, to have her preliminary hearing on the charge of murdering her famous teacher." Yes, Deputy D.A. Chamberlin, or whoever prosecuted at the preliminary hearing, surely still had to prove that it was murder. And the defendant's name is "Donna Lenore Ross", per Chamberlin, to distinguish her from all of the uncharged Donna Rosses, however beautiful and protected. Hopefully the Chronicle follows better standards of journalism nowadays. Submitted by (lowercase, with a comma and period) masonite, 02/20/19.

Maid?: Did Mrs. Carpenter have servants? While talking to Eric at her house the doorbell was ringing then Mr. Collis entered the room. Did he just walk into the house because nobody answered the door? Submitted by H. Mason 11/3/14
+ I think Collis just let himself in. When Worthington rang the doorbell it was Mrs. Carpenter herself who answered the door, i.e. no maid. Submitted by Kilo 6/4/2018.

What he saw: Mr. Gracie did see a car he recognized, but mistook it for Mr. Carpenter's instead of his wife's. That's the only way the facts fit if he saw Donna leave after that car...Why didn't Mr. Carpenter notice the car at the cottage? Submitted by H. Mason 11/3/14

Hard to believe? It seems a bit hard to believe that on the stand Donna said that she was not aware David Carpenter was in love with her or at least has some interest after providing her a house, a car, and lavish gifts especially at 1960 prices. She is quite the naive one. Submitted by Perry Baby 9/29/15.