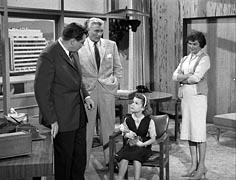 From The Perry Mason TV Show Book (Revised)
Perry has been planning a fly-fishing vacation in Scotland for three years, and this time he’s going to let nothing stand in his way. But Della tells him there’s a client waiting outside that he'll fall in love with. When he sees seven-year-old Peggy Smith, he does.

Peggy lives at a boarding school and is searching for her identity, since she has no idea who her real parents are. A search of birth records leads Perry to believe that Peggy is the daughter of Clark Lawson and Margaret Jeffers Lawson. Margaret was the daughter of wealthy Courtney Jeffers, a crotchety old man who disowned Margaret after she eloped. Margaret died shortly after Peggy was born. Jeffers relents when he sees Peggy and quickly embraces her, even changing his will to leave everything to her. The next day, Jeffers is found dead, killed with a poker.

Now Peggy gets involved helping another member of the family to be cleared of Jeffers’s murder—a unique episode with a melancholy ending.

Fans. will spot John Banner, Sergeant Shultz of Hogan’s Heroes, in this episode. 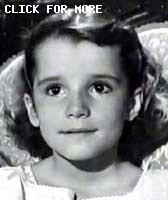 Anomaly: Jeanette Nolan, listed as Emma Benson, is called Martha on two occasions and Mrs. Benson the rest of the time.

Laurie Perreau makes her only appearance on Perry here playing the lead role, Peggy Smith. Laurie Perreau had a very abbreviated acting career in the 60s, but most people remember her more famous sister Gigi Perreau. Gigi Perreau, who also appeared in two episodes of Perry was a very active child actor in movies and on television. Submitted by PaulDrake 33, 21 August 2009.
+ Laurie and Gigi Perreau also have a brother who guest starred on Perry Mason. Richard Miles played Jimmy Morrow the defendant in TCOT Spanish Cross (#67, 2.28). Submitted by Charles Richmond, 9/26/2013

The venerable Eleanor Audley makes her second appearance her. You may know her better as the voice of a wicked stepmother (Cinderella) or an evil fairy (Sleeping Beauty) in the movies. See trivia item for episode #42, TCOT Pint-Sized Client. Curiously enough, in both episodes, Mason’s client is a child. Submitted by gracep, 10/25/2010.

Frances Helm who played Helene Osborne in this one, was first married to Brian Keith. They subsequently divorced after 6 1/2 years and on the same day they divorced (06/23/1954), Brian Keith married his 2nd wife Judith Landon. WOW! Submitted by mesave31, 05/07/15.

The Jeffers family patriarch is played capably by Francis X. Bushman, a big star in silent films. Wikipedia tells us he drove horses and chariots in the first Ben Hur, and was billed as "The Handsomest Man on Hollywood" before that title was conferred on Clark Gable. Mr. Bushman also appeared in TCOT Flighty Father, episode 95, as the elderly uncle (and later appears in episode 199, TCOT Nervous Neighbor) and plenty of other more modern movies and TV. JohnK, 5 October 2015.

Sightings: If you are lucky you might catch a glimpse of “Miss Carmody” and Distinguished Gentleman #1 in the courtroom gallery. Find out who they and other regulars are, and the mystery behind them, here. Submitted by gracep 10/25/2010.
+After the first court break, we find the Little Old Lady in the Hat and Distinguished Lady #4 in the back row viewing the action. Bill767, 1/3/16.

++Mediterranean Woman gets a lot of face time in this hearing. In the first session she finds a seat right behind Mason, but she is bumped to the second row for the dramatic closing. JohnK, 19 November 2022

Two cups from the Curious Coffee Set make an appearance in the restaurant in Geneva. More info here. Submitted by daveb, 12/30/10.
+Correction: The restaurant was in Gstaad, Switzerland. The bank was in Geneva. Added by H. Mason 11/4/14

CARS. No Cast Cars but four background cars, all small European imports, are incidentally parked in front of Westcroft School early in the episode. The nearest is

These cars indicate the strong and growing demand for small economy cars in the US at that time, a demand that was largely filled by European automakers. Assuming that the Staff parked behind the school, it appears that the average visitor to Westcroft didn't drive a Caddy. Added by Gary Woloski, 9/22/12.

Location: The building in the opening shot is Los Angeles City Hall. At the time of the original airdate of this episode, this edifice was the tallest building in L.A. We see it in nearly every episode through Perry’s office window, and it is frequently seen in many other TV series, including Dragnet.
+ And fans of the '50s TV show The Adventures of Superman will recognize it as the Daily Planet building. Submitted by francis, 9/03/14.

TCO Extraneous Europe If I am not mistaken, this is Perry's first trip "overseas" - he had earlier journeyed to Canada and Mexico - and with the little they do with it, one wonders why the script writers even bothered (though perhaps the cliche of Swiss secrecy might be considered an excuse). In Perry's two subsequent returns, the European setting will become a key part of the action, but here there's just a stock establishing shot of Geneva, a few indoor scenes and another stock shot of a return flight home (a Super Constellation prop-plane, no less...a concession to plausibility for a series that just a few episodes back had a character flying from LA-Carmel on Pan Am !!) Submitted by Notcom, 111915.

+ The original tickets are for "non-stop" LAX to LHR, a 5,500 mile trip. Jets back then could not fly that far. (Correct me if I am wrong!) Did the writers check if actually possible? (Maybe it was?) I suspect his trip was LAX -> Idlewild (now JFK) -> London (LHR). Rick P. 10/12/21 > The evidence is ambiguous: in 1960, TWA ads clearly stated - as Rick theorized - flights were routed thru New York; but ads from Alitalia proclaimed nonstop to London (one big difference: the latter flew DC-8's, and Douglas had introduced that year the DC8-40, capable of a 5500 mile run). But it's possible the ad appeared in all U.S. papers, and non-stop wasn't LA>UK; it's also possible that "stop" only referred to a revenue stopover, not a refueling one. Within a year however, there was no longer any doubt: Boeing had added its long-range version, and multiple airlines now advertised just the itinerary mentioned. Notcom 101321.

This is the third of five PM appearances for Robert Karnes, who would appear in six episodes of Ironside...MikeM. 11/30/2016

As Perry is leaving his office for his trip, Paul says, "Perry, it's getting late; we'd better get going." Perry then says, "Have you got the tickets, Della?" and she responds "right here" as she removes the tickets from an envelope. Perry then picks up his briefcase, Paul picks up Perry's suitcase, and they both depart, leaving Della still holding the tickets. Submitted by Dan K, 11/30/16.

As he is preparing to depart in the first scene, Perry is wearing a hat. This is the first appearance of Mr. Mason in headwear in a long time. Is it the last? OLEF641 2/19/21

Perry lights up on the plane sitting next to Linda. Smoking on airplanes...those were the days...not. July 9,2013 Mason Jar
+ It looks like airplane seating was just as cramped back then as today. Perry is spilling over into Linda Osborne's space causing her to be squished. Submitted by Kilo 8/14/2017.

Just as the Brent Building magically has balconies from the inside but none on the outside, the very traditional courtroom shown here bears no relation to the Mid Century modern building that supposedly houses it.

We get a rare glimpse of Perry letting his hair down, at about 17 minutes on the DVD, when he says to the waiter: "Fine cognac...Leave the bottle." JohnK, 5 October 2015

I think this is one of the most unusual, and memorable, episodes of Perry Mason. The pathetic--and creepy--little girl (I half expect her to order her dolls to attack someone!), Linda Osborne's shocking reaction to her, Mr. Kringle, the beheaded doll...lend an almost Twilight Zone-ish feeling to this episode. Submitted by 65tosspowertrap, 9/16/2013.

As a Sally Field fan (especially in her Gidget incarnation), it is fascinating to me to see her mother--Maggie Mahoney--in this episode. "The apple doesn't fall far from the tree." Submitted by 65tosspowertrap 9/16/2013.

I'm sorry, but I can't resist: when A. Tobler (John Banner, Sergeant Shultz of Hogan’s Heroes) refuses to disclose any information about the account set up for Peggy, he might as well say, "I know nothing! Nothing!" Submitted by 65tosspowertrap, 9/16/2013.

I'm surprised Laurie Perreau didn't have a longer career (and there seems to be nothing in Google about her). This was a great performance. I didn't find her character creepy at all, but definitely pathetic. I must confess, when this episode was over, I was reaching for the Kleenex. submitted by scarter 8/24/14

Quote: "Lawyers have as much right to vacations as plumbers, stockbrokers and / or private investigators." - Perry Mason. So what happened to Paul's vacation in episode 99 TCOT Singular Double? Submitted by H. Mason 11/3/14

The exact same thing - life got in the way. It's scenes like those that drive home what kind of people Perry, Della and Paul truly were and how often they sacrificed their own needs and pleasures to help others.

I was very happy when the writing in the first season changed to show the respect Perry and Tragg had for each other. All four of those characters were real people; unlike Burger, who was nothing more than a sad caricature whose whole existence revolved around desperately needing to 'one up' Perry at every turn - even to the point of sacrificing true justice.

It's almost as if Hamilton's whole train of thought was "uh-oh, Perry has a new client, I need to charge them with murder!" Submitted by Arisia, 03/10/18.

Hypocrisy? Perry seems remarkably indifferent to Tobler's need to respect confidentially, which seems strange since Perry's invoking that reason is a hallmark of the show (indeed, he will do so just a few minute later with Helene Osborne). Perhaps we can rationalize his behavior with the explanation of exciting behind-the-scenes maneuvering...which does indeed occur. Notcom, 020620.

This episode really needs a followup; there are so many legal questions left hanging -

1. Jeffers never did sign a new will. Does the original stay in force, or would a court agree his intentions were clear enough to accept the unsigned new will? 2.Emma Benson can't inherit; if her husband did not know of her crime, can he still inherit? 3. The Osbornes conspired to keep the existence of Peggy a secret. Is that actually a criminal act? If so, is it enough to disqualify them if the original will stands? The public demands answers! DOD 09/11/18

I agree, DOD. The implication is that the draft of the new will will be honored. I also want to know whether Linda Osborne's tears and hug of Peggy at the end mean she will finally let go of her painful memories and embrace Peggy as family. Peggy lost her newly found grandfather; her cousin Larry is a louse; Linda is her last hope of having a family. Submitted by JazzBaby, 9/1/2019.

Laurie Perreau can apparently be found these days at an inactive Twitter account under her full name @LaurenPerreau where there is an active web link to her online business distributing supplies for head shops. (Bill Talman might have approved!) :)