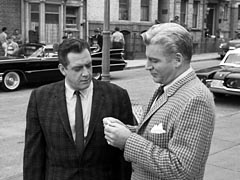 From The Perry Mason TV Show Book
Jimmy Morrow was trying to go straight after having been put on probation for car theft. Now he's faced with a bum rap for stealing a valuable Spanish cross and killing the owner.

Perry wants to give a kid a break and takes the case.

Perry's longish dramatic scene in the cellar trying to convince Felix [correction: "Jimmy" -jfh 13Jul2022] to surrender was quite unusual for the series. You do not see this softer compassionate side of Perry much in the series. Submitted by Perry Baby 3/6/15. The word soliloquy comes to mind. Joe B. 12/16/20

The dramatic lighting in this scene is quite impressive. DOD 08/03/19

Sightings: Pencil Mustache Man makes another appearance in the far corner of the courtroom gallery, defendant’s side. When the hearing reconvenes after recess, our man reappears on the prosecutor’s side, second row. Both times he seems keenly interested in the proceedings. Oh, and then in a quick shot as Mr. Wormser is about to be re-crossed, we spy Distinguished Gentleman #1 back in the shadows of the defendant’s side. Lastly, Quiet Old Man can be seen to mutter with surprise when the killer is revealed! Submitted by gracep, 9/3/2010.
+ “Miss Carmody” is visible in the gallery just over Burger’s shoulder at the beginning of the courtroom scene. Submitted by alan_sings, 3 Oct 2010.
+ The rarely seen Distinguished Lady #3 is seated almost directly behind Perry. Read more about all these favorite frequent faces.

Jacques Aubuchon (Felix Karr) makes the first of four appearances on PM. His Cuban cigars were still legal in 1959. Submitted by MikeM, 11/07/2012

Jonathan Hole as Wormser makes another (second of five - jfh 13Jul2022) appearance as unsavory and overly nervous character and involved in the crime. Submitted by Perry Baby 3/6/15.
+And, just as in Episode #26 (TCOT Half-Wakened Wife), Jonathan Hole again pulls out a handkerchief to wipe the perspiration off his face as he is broken down on the witness stand by Perry. Submitted by BobH, 4 July 2016.

This is the second of four PM appearances for Arthur Space (James Morrow, Sr.), who had a recurring role as veterinarian Dr. Weaver on the "Lassie" television series...MikeM. 7/10/2017

I consider this one of those “topical” Perry Mason episodes. It deals with “juvenile delinquency,” a hot topic back then—Blackboard Jungle, Young Savages, Rebel Without a Cause, etc. Since it is topical, the episode comes across more “dated” than is generally true for Perry Mason. Also, and this may be just me, I detect a bit of homoeroticism. Even so, it’s still a credible entry in the oeuvre.
+ It's a bit ironic that the link to the obit of the actor who portrayed 'Jimmy', Gerald Perreau-Saissine, (see below Spoiler Warning) mentions him being survived by two male partners. Odd, I didn't feel any sense of homoeroticism when watching ... then again, my wife says I can't even tell when a woman is flirting with me, so what do I know? Submitted by MikeReese, 10/11/2016.
++ What you are calling homoeroticism might just be paternalism, if you are referring to the interaction between wise, kindly Mason and young Jimmy. Submitted by gracep, 9/3/2010.
+++ It looked like cryptic homoeroticism to me. Did you notice that Perry never told young Jimmy that he was a lawyer? Play it back if you don't believe me. The speech Raymond Burr gave about "trust," which i found quite over-written (although well played) was right out of those 1930s - 1950s Catholic priest movies, where the priest convinces a young man in trouble to give himself up to the cops. I also don't think it is "ironic" that Gerald Perreau-Saissine was gay. Raymond Burr, who was deeply in the closet, was a good enough actor to pull off some delightfully flirtatious scenes with Barbara Hale, as we all now know, but he seemed to smile a little more brightly when gay men were featured in the cast, and he often "clicked" with them in genuinely charming ways. Watch his scenes with Neil Hamilton, for instance. Submitted by catyron, January 13th, 2021.
++++ Other topics designed to make the series seem more relevant usually made it less interesting. Topics included: jazz, beatnik artists, gangs, show biz, high fashion. Submitted by Wick 1/14/22

"Topical" or not, I like the jazzy, almost rock-n-rollish music in this episode. jfh 02Aug2019.

In retrospect, at least as far as juvenile delinquency goes, Eisenhower’s “America” really wasn't all that bad. Submitted by billp, 31 October 2009.

When Felix Karr takes flowers to call on the widow Runyon, he mentioned he felt rather like he was "carrying coals to Newcastle" which means "to supply something to a place or person that already has a lot of that particular thing." jfh 09Jan2023

The brief interlude between the judge and Burger regarding the latter's laryngitis seems odd; it plays no part in the plot other than to explain Burger’s hoarse voice. Why didn’t they just postpone filming that scene for a day or two? Submitted by Ed Zoerner, 2/1/2010.
+ Ham Burger's hoarseness was probably related to William Talman's smoking, which would kill him within ten years. The tight shooting schedule, described in the Dan Jenkin's article linked in an earlier episode, prevented waiting for actor's health problems to clear up. Submitted by MikeM 7/27/2012
++ To my ear the only time Burger sounded hoarse was when he apologized to the judge for being hoarse. Immediately thereafter in the same court session he sounded normal. Submitted by Kilo 4/29/2018.

When leaving James Morrow, Sr.’s apartment, Mason leaves his card and Drake leaves a pack of cigarettes, presumably as an act of kindness. Submitted by gracep, 9/3/2010.
+ I noticed that too -- a very nice gesture on Paul Drake's part. Submitted by catyro, January 13th, 2021.

This is one of the few times the series used (what can be said to be obviously) a backlot set for a street scene - such sets being called, depending on the studio, names like "New York Street" or "Chicago Street" - and it's not clear why, since the act of walking up to the apartment forms no meaningful part of the show, and whatever advantage there may have been gained by showing a poor neighborhood was - IMHO - more than offset by showing what was obviously not an LA street. Critiqued by Notcom, 110117.
+ I agree completely.This looks to be the New York Street on the FOX Pico lot.The T intersection so common on Back-lots looks to be the same one seen regularly on How I Met Your Mother. Phil 102418

Gerald Perreau-Saissine (a.k.a Richard Miles/Peter Miles) turns in a decent performance as Jimmy, but seems to have dropped out of film/tv about this time. This makes Perry’s final comments about his character somewhat ironic. Since Perreau-Saissine seemed a credible actor and photogenic, his disappearance is curious. Whatever the explanation, he seems to have had an interesting life. (See his obit here and a retrospective here).
+ According to Wikipedia, "As Richard Miles, he wrote novels, poetry, and two screenplays. In 1963, he entered his first novel, That Cold Day in the Park, in a Dell Publishing contest; it did not win, but was considered worthy of publication (in 1965); it was made into a film of the same name in 1969."

Jimmy’s dad mentions the real thief of Mrs. Runyan’s car — a Barney Kellogg (who never appears). Later, Drake tails the invisible Kellogg in his search for Jimmy. And Mason brings the non-appearing but oft-mentioned Kellogg up at least once when conferring with his client Jimmy. Submitted by gracep 9/2/2010.
+ Correction: It was Paul's operative Harry Kline that followed Barney Kellogg to Jimmy's hiding place. Submitted by H. Mason 10/21/14

Questions: What happened to the cross? Did Felix Karr keep it or was it returned to Mrs. Runyon? Submitted by H. Mason 10/21/14

Out of this trial, Wormser was guilty of theft and perjury; and Felix should have had to return the cross. Could he be charged with anything? He admitted he probably has stolen artifacts when he was negotiating to buy the cross. He also drugged Wormser and held stolen property. Submitted by Perry Baby 1/21/18.

There’s a bit of “Maltese Falcon” in this episode: an historic artifact, a somewhat rotund and pompous semi-villain, someone gets drugged, and a question of who actually owns said artifact. As Kaspar Gutman notes, you could say the falcon technically belongs to the King of Spain. Perhaps the cross technically belongs to Hernando Cortez. DOD 08/17/20
+ I agree 100%. The script, as written, presents up with almost a parody of the rotund, art-loving, conniving, pompous gay man that Sydney Greenstreet portrayed as Kaspar Gutman in "The Maltese Falcon." The use of the word "sir," was straight out of those older movies. The homoerotic overtones of "The Maltese Falcon" were also echoed in this episode, as others have noted. Submitted by catyron, January 13, 2021.

I remember my mom, who was usually ironing, with pre-teen me on the couch, mentioning "loose ends" after watching PM when they were new.