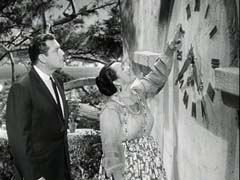 From The Perry Mason TV Show Book
A lawyer’s work is never done. Perry returns to his office late one night and finds an attractive blonde climbing into his balcony window. She claims to be Virginia Colfax, Ed Garvin’s secretary from next door. Virginia says that she climbed into Perry’s office to escape Garvin’s wife. But it seems Garvin is married to two women.

Perry sends Garvin and his second wife to Mexico until he can clear up the situation. But when Garvin’s first wife is murdered, Perry’s client is in an even bigger mess. And who was that woman climbing in the window?

Look for Betsy Jones Moreland playing Lorrie Garvin. Does she look familiar? She might. She returns in 1990 to play the Judge in seven of the 26 two-hour Perry Mason made-for-TV movies. Submitted by daveb, 8/2/2007.

About 23 minutes into the show, Helen Bynum, a.k.a. Virginia Colfax, is in Mexico checking out registrations of vehicles parked in front of the hotel. The show then cuts to an establishing shot of the Los Angeles freeway before Della phones Perry. This same establishing shot of the freeway was used to bring the action from Las Vegas back to Los Angeles in the opening of #33, TCOT Long Legged Models. Submitted by PaulDrake 33, 7/19/2008.
+ Helen/Virginia sees Edward Garvin's Cheviot Drive address on the '59 Edsel's registration form. You saw this same address on John Addison's car registration in ep#9. The address will appear again before its significance is revealed in ep# ??? ! Added by Gary Woloski, 7/23/18.

This will mark the final appearance by Jean Tabor, (she earlier appeared as Evelyn Whiting in #32, TCOT Substitute Face), on Perry Mason. In January 1962 the beautiful 29-year-old Jean Tabor would wed the brutish 50-year-old Broderick Crawford. The marriage would last until 1967. A year-and-a-half later in December 1968, the 36-year-old Jean Tabor would be found dead of a drug overdose. Submitted by PaulDrake 33, 7/19/2008. +In her previous PM appearance, "Jean" Tabor (Virginia Colfax) appeared using her normal acting name of Joan, which was her real middle name. In May 1959, columnist Walter Winchell asked "Are Raymond Burr and actress Joan Tabor planning a surprise?" The December 1968 AP report of Joan Tabor's death gave the cause as an accidental overdose of flu medication. Submitted by MikeM, 11/07/2012

Ray Collins is listed in the opening credits even though he does not appear in this episode. Submitted by PaulDrake 33, 7/20/2008.
+ Ditto for William Talman. Submitted by gracep 9/4/2010.

I do not know if the opening that is on my DVD of this episode was the original opening; however, the opening that is on my DVD is unlike any other opening I have ever seen. The action stops shortly after Perry takes the files from the Judge and everyone’s names are printed on the files. Unlike all other openings in the first two seasons, no one but Perry and the Judge are shown. Submitted by PaulDrake 33, 10/20/2008.
+ When I viewed this episode, the action was the regular Style P for season 2. A subsequent rebroadcast of the syndication print on my local public TV station showed the same. The credits described by PaulDrake33 are, however, modified Style P used in later epsiodes after Talman’s troubles. Submitted by gracep, 10/3/2010 & updated 7/17/2011.
+ My DVD also shows the modified Style P. I believe it's a different judge, the file the judge hands to Mason is bound at the top, rather than the side, the pen and gavel are gone from the bench behind Mason, the microphone has changed to black, the scene freezes on the files, the credits are printed on the files, and William Talman's name is omitted. Why the change in opening credits for the DVD? It is true that Talman (Burger) does not appear in this episode, but then, neither does Ray Collins (Tragg). - Submitted by 10yearoldfan, 18 June 2012.
+ The MeTV version shows the modified opening with William Talman's name expunged. Why would anyone go back and eliminate Talman's name from an episode which aired nine months BEFORE he was arrested?...MikeM. 7/11/2017

Goof: In the second scene of this episode, where Edward Garvin comes to Perry’s office for help, Perry asks Garvin about a lady that is “about five-eight, blonde, lovely figure, beautiful legs.” Garvin said, “Well, you’re describing Lorrie…my present wife.” Yet later in the episode when we see Edward Garvin’s present wife, she is not a blonde. Submitted by Charles Richmond, 07/19/2009.
+ Back then, there were five hair colors, black, red, brunette, blonde, and gray. Light to medium brown hair was usually referred to as blonde or 'dirty blonde'. No one used the term 'brown'; dark brown hair was simply called brunette. Blonde hair back then was rarely the yellowish white color you see today. That's why Marilyn Monroe stood out so much back then; and why I've never know what word to use to describe hair color, unless it's blue, green, or purple :-D . Submitted by Arisia, 02/19/18
++ Also, hair that appears blonde in person often photographs darker -- I'm guessing that's what led to bleached, 'platinum' blondes in the movies, which gave an unambiguously light colored head of hair on film. Oh, and don't forget "strawberry blonde" ;-) OLEF641 12/30/2020

Another Goof: When Virginia Colfax arrives at the Vista Del Mar and checks the registration slip on Edward Garvin's car, it lists the vehicle as a Cadillac; it certainly is not. We don't see much of it, but judging by the trim and distinctive taillight shape, I'd say it's an Edsel. Submitted by francis, 7/23/14.
+ She must have been looking at Perry's Cadillac. HamBurger 7/7/2016

Just watched this scene and Francis is correct - the car is an Edsel but the registration reads Cadillac. DOD 08/05/19

Continuity: When Mason confronts Virginia Colfax in his office it’s nighttime, yet when Mason scuffles with her in front of his office building a few minutes later, it’s bright daylight. That’s the quickest sunrise in history. Submitted by Craig, 4/10/2010.

Sightings: Distinguished Gentleman #1 very inconspicuously wears glasses and sits on the defendant’s side of the room. Submitted by gracep, 9/04/2010.
+ Blue Collar Guy drives Helen Bynum’s cab when she flees from Perry at the Brent Building. Submitted by alan_sings, 3 Oct 2010.
+ “Miss Carmody” is visible in the back of the gallery next to the door when Frank Livesey returns to the stand. Submitted by alan_sings, 3 Oct 2010.
+ Distinguished Gentleman #2? appears in court in two different places. More info on all of these folks here. Submitted by gracenote, 7/18/2011.

+ I believe that "Distinguished Lady #2" is visible behind Mr. Denby in the courtroom. Submitted by JazzBaby, 8/18/2019.

Location: Both the old and new (well, the Civic Center which may have had courtrooms) San Diego courthouses are seen briefly in establishing shots. Submitted by daveb, 9/8/2010. Some pictures here.

It's for you, Mr. Mason: Perry's just sitting down to breakfast at the Vista Del Mar when the hostess, Filomena, summons him to a pay phone. It's Della calling from L.A. Submitted by francis, 7/23/14.

Recycled newspaper: Della checked newspapers while waiting for her call to get through to Perry in Mexico. One of the papers she had came from episode 56 TCOT Romantic Rogue. Submitted by H. Mason 10/22/14

Fake Della: For the first of several times some woman pretends to be Della Street. Submitted by H. Mason 10/22/14

Taxi: The Sky-View cab had the phone number Madison 5-1234 on its body. That number was on Yellow cabs in episodes 37 and 41. Were the companies merging? See trivia notes for the next episode. Submitted by H. Mason 10/22/14

This is the first of three PM appearances for K.T. Stevens (Ethel Garvin), who was the daughter of director Sam Wood...MikeM. 10/11/2016

A Mexican Divorce: The illegality of the infamous Mexican divorce is well explained in this episode, but a few years later, in 1962, the Drifters' song "Mexican Divorce," written by Burt Bacharach, pointed out further problems: "It's a sin for you to get / A Mexican divorce." Submitted by catyron 11/2/2017

Isn't Perry putting his legal standing at risk, when after knowing that a felony warrant is outstanding for Mr. Garvin, he enlists the quasi strangers who are Garvin's business partners, to contact him and tell him to flee the country. Phil A. 7/23/2018

This is the first of three PM appearances for Patrick McVey (Covington), who was an attorney before he became an actor. Patrick McVey passed away in 1973, the year his final film, "Bang The Drum Slowly", was released. Patrick McVey was 63 years old...MikeM. 7/23/2018

What a poorer society we are because there are no longer actors like Thomas B. Henry on television. Mr. Henry was less than handsome, with a distinctive appearance, but was a fine actor. Check out his testimony late in the show, it is riveting. It seems as if all of today’s television actors are selected for their appearance, not for their acting abilities. Submitted by PaulDrake 33, 7/19/2008.
+ He reminds me of actor Al Lewis. This is the second of his three Perry episodes: Ralph Duncan in "The Case of the Sleepwalker's Niece (1957)", this episode, and Hartley Basset in "The Case of the Treacherous Toupee (1960)". jfh 23Jul2018.

TCOT Shapely Shamus: This is one of my favorite episodes, owing to the presence of the actress Joan Tabor, and equally so her portrayal of the Colfax/Bynum character. OK, she's gorgeous. But in the hot seat she's great at mouthing off to Perry. And Colfax/Bynum's conduct as a private detective is so slipshod, and she's terrible at covering her tracks - maybe we have ESG to thank for that; I don't know how closely the script follows the novel. She handles a gun well too, in the opening on the terrace, with the flashing revolver and her girlish toss into the bushes. That credit goes to the director I suppose. JohnK, 1 September 2021

During the second round of questioning Distinguished Gentleman’s eyeglasses keep appearing and disappearing. DOD 08/05/19

The judge is absent during the second questioning of Colfax/Bynam. He suddenly reappears when Livesy approaches the bench. DOD 09/01/2021

In this episode, it would appear that Perry's Office butted against Garvin's but we know Perry has a door on the wall behind his desk. If there is a hallway between Perry's and Garvin's office it must be small. Of course, the exterior shots of the Brent Building does not have balconies. Submitted by Perry Baby 1/21/18.
+ When we get a look out of Garvin's office window, the view confirms that the offices are indeed very close together; no parallax! Garvin's view of LA is the same as Perry's. Added by Gary Woloski, 7/23/18.
++ To the often heard complaint - repeated here by Perry Baby - that "the Brent building does not have balconies", I've always had a ready reply: Perry's office is in back (and in point of fact, given the siting of the actual building at the eastern corner of 6th/Flower, in order to have the view seen in the show, that would be true). This episode, tho, contradicts that argument: after descending to the street, Perry states "let's look for it over there", gesturing to a point that would clearly be in the front of the building. Notcom, 123120.

A rare episode in which we never see the body. For his appointment with the San Diego DA, Perry is uncharacteristically casual - he wears no necktie. And just what was it that Virginia Colfax was hired to do? DOD 07/23/18

Thomas B. Henry also appeared in “TCOT Sleepwalker’s Niece.” Brown gave another fine performance in this episode as the lawyer Ralph Duncan*. Perry’s final tip-off as to the murderer came from some testimony given by Duncan. Submitted by Charles Richmond. Submitted by PaulDrake 33, 7/20/2008.
*(Note: he is Duncan in the previously mentioned episode, here he is 'George Denby').

Out this trial we have several crimes to prosecute beyond the murder: Colfax for perjury, breaking and entering, impersonation, car theft. Submitted by Perry Baby 1/21/18.

So often Paul shows concern about doing anything the least bit questionable for fear of losing his license. Helen Bynam apparently has no such scruples. DOD 09/01/2021