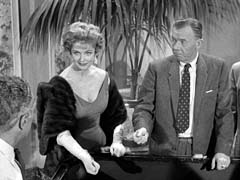 From The Perry Mason TV Show Book
Glenn Falkner owned a small motel in Las Vegas but fell prey to the gambling tables. When he wouldn't pay up, bigtime thug George Castle shot him.

Now Falkner's daughter is alone and she must deal with dad's debts and George Castle's designs on her newly inherited land. She has a motive to kill Castle but someone beats her to it. Tragg arrests her on suspicion anyway. Enter Perry for the defense.

Sightings:In the opening scene we find the Pencil Mustache Man gambling and later he shows up at his job as a waiter at Franchi's where Perry Della, and Tragg show up for lunch. The dealer at his table is Sasha Magaloff. I guess he worked as a dealer before he made it to the big time as a custom tailor. In court, the Distinguished Gentleman assumes his court reporter positiion while the Distinguished Lady #2 is on duty as the matron. Little Old Lady #2 is in the back of the courtroom and after Lunch, they are joined by Little Old Lady #1 and Distinguished Lady #4 on Perry's side and the Pencil Mustache Man and Distinguished Gentleman #2 on Burger's side. Bringing up the rear, the Blue collar guy carries the replacement desk into Junior's office. Submitted by BigBill767, 12/9/16.

Michael Garvin, Jr. has four automobile salesmen working for him: Murphy, Tribe, Gillson, and Finley. Finley has sold the most cars this month, 5, as evidenced by the chalkboard behind Michael’s office desk. Even though Michael does his best to sell Perry the Thunderbird, he is not listed on the board as a salesman. Submitted by PaulDrake33.

When Perry tells Paul to go Las Vegas to check out some people, we see Paul open one of the file drawers in his office. Starting from the back of the drawer and moving toward the front, Paul reads off the file labels. “Las Palmas, Las Tunas, Las Vegas.” Which would strongly suggest that Paul’s files are in reverse alphabetical order. Submitted by cobolpoet, 11/20/09.

Russell Thorson makes his initial appearance here on Perry as Glenn Falkner. In the oldest surviving radio broadcast of The Tom Mix Show from 1939, Russell Thorson plays the part of Tom Mix. Submitted by PaulDrake 33, 18 December 2009.
+ Father Mulcahy used a Tom Mix pocketknife to perform an emergency tracheotomy in a 1976 M*A*S*H. Mike Bedard 4.30.15

About 17 minutes in you can see a Dick Tracy cartoon behind Paul Drake. See PaulDrake’s post on Episode #5. Submitted by Eric Cooper, 12 January 11.
+ Also in #20 Lonely Heiress, in an early scene in Paul Drake's office (with Lacey and then Paul's secretary), you can see a framed drawing of Dick Tracy on his desk. AND a Dick Tracy picture was also reported in #5 Sulky Girl as stated above. Thanks! Submitted by mesave31, 04/16/15.
++ "'Dick Tracy' (originally 'Plainclothes Tracy') [was] created by Chester Gould [and] made its debut on Oct. 4, 1931 in the Detroit Mirror...Gould wrote and drew the strip until 1977," en.wikipedia observes. Mike Bedard 5.4.15

This was the last first-season appearance as a judge for Frank Wilcox. Tall, lanky and handsome, Wilcox began his career as a contract player for Warner Brothers in the 1930s, including several films with Errol Flynn. He appeared in seven Mason episodes (of the 37 in which there was a judge), making his the most-used actor in that role. Unfortunately, he was in only one more episode, # 96 TCOT Treacherous Toupee. Submitted by FredK 21 April 2011.
+ He also appeared as a judge in an episode of The Jack Benny Program, in which Jack is ineptly defended in a murder trial by Perry Mason (played by Raymond Burr). submitted by vgy7ujm 24 January 2015.

There were actually over 200 episodes with judges -- almost all, in fact. John Gallaudet alone was in almost 2 dozen episodes. cgraul 7.2.12

My comment about Wilcox being the most frequent judge was limited to the first season episodes only. A number of actors appeared in more than eight episodes, including Gallaudet, Nelson Leigh, Charles Irving, Richard Gaines, Grandon Rhodes, Morris Ankrum, Willis Bouchey, and the true ironmen among judges, Kenneth MacDonald and S. John Launer. Submitted by FredK, 4 July 2012.

Switching guns: This was the second of three stories where it happened. It was also done in episodes 1 and 87. Submitted by H. Mason 9/27/14

Unsolved mysteries: How did George Castle earn his money before he was murdered? Submitted by H. Mason 10/8/14

License plate: When Perry is about to enter his car to go to Stephanie's there is a Mercury in the background with the license plate MYR 636. That tag number was on the Bannister Farms vehicle in episode 27 TCOT Desperate Daughter. Submitted by H. Mason 10/8/14

Inconsistency: Perry and Michael Garvin, Jr. go to the apartment of Stephanie and Mr. Mason has to talk through the door to let her know he's outside. Soon after they're inside the phone rings (it's not for Perry) and she was informed that Lt. Tragg had arrived and wanted permission to see her. Submitted by H. Mason 10/8/14

The sign above the Las Vegas theatre in the opening shot proclaims "Surprise hit of year 'Pick Up' with Beverly Michaels." Since the movie was released in 1951, one might assume the footage is also from that year. Leonard Maltin calls the movie a "tawdry low-budget melodrama" and gives it one and a half stars. Also on the bill: "Criminal Lawyer" not a 1930's Perry Mason movie but another 1951 movie which starred Pat O'Brien and also gets one and a half stars from Maltin. Submitted by Wiseguy70005, 10/27/14.

"Frederick Steiner (1923-2011) was an American composer, conductor, orchestrator, film historian, and arranger for television, radio & film....Steiner wrote the Theme Music for PERRY MASON and The Rocky & Bullwinkle Show. [He] was most active in television in the 1950s and 60s. His numerous composition credits included music for Hogan's Heroes, The Twilight Zone and STAR TREK," en.wikipedia observes. Fred was Not credited at this point in the series; he was End-credited in later seasons. The 2-hour, Color Perry Movies said "Original Perry Mason Theme by Fred Steiner" in the Opening credits. Mike Bedard 5.5.15

Lyle Talbot only did this one PM episode, but that left him time to do a zillion other shows, including being the Nelson family's neighbor Joe Randolph for a decade....MIkeM. 8/23/2016
+ While this, indeed, is Lyle Talbot's only PM episode, he did star in a PM movie in 1935, playing Dr. Bob Doray, in The Case Of The Lucky Legs in which Warren William starred as Perry and Genevieve Tobin starred as Della. jfh 29Oct2019.

When Perry is leaving George Castle's apartment he goes through the motions of buttoning the second button of his overcoat. He clearly failed getting it buttoned. He was more successful on the third button. Submitted by Kilo 3/22/2018.

This is the only PM appearance for Alix Talton, who was Georgia's entry in the 1938 Miss America contest. In 1944, Alix married Air Corps sergeant, and former Hollywood agent, Lou Kerner. The couple had a son, and divorced in 1949. In 1950, Alix married producer/director George Cahan, and they had one daughter. The couple remained married until Cahan passed in 1991. Alix Talton passed in 1992, at the age of 71...MikeM. 6/5/2018

At about 29:30 into the episode, we see Della fiddling with the Dictaphone Time Master (cf., Substitute Face et al.). You can see the belt-shaped recording medium which was made of acetate. The acetate could be quite colorful, e.g., blood-red. A stylus was used to inscribe the audio. Later models used magnetic media. I wonder if this was an example of product placement? Submitted by billp, 1/19/09.

Note how skillfully Mason negotiates with Castle. Mason's initial asking price is $225,000; Castle counters with $150,000. After Perry gets Castle thoroughly tied in knots, he gets Castle to agree to $225,000. Castle's initial offer to Stephanie Falkner was $90,000. Submitted by 65tosspowertrap, 19 April 2014.
I found it odd that such a cool character as Castle should get so flustered dealing with Perry - and we never do find out why the deal was so important to him that he was willing to commit murder. DOD 06/17/19
+Castle had paid $50,000 on some sort of option (?) and he was going to lose that money if he wasn't able to obtain and sell the Faulkner property to the other property developers in the next few days. Faulkner didn't want to sell, so by killing him, he thought he could get his daughter to sell him the property. I think Castle was a bit flustered because he was now dealing with someone who knew what they were doing and couldn't be intimidated. He was desperate to buy but kept seeing his profits disappear as Mason raised the selling price. —yelocab 27NOV19.
+ After this successful negotiation with Castle, Perry is in a phone booth outside Castle’s apartment building placing a call to Paul Drake when Stephanie arrives in a taxi. Perry tells Paul to hold a moment and exits the phone booth to get a good look at Stephanie, but makes absolutely no effort to call out to her and then returns to the phone booth as she goes up to Castle’s apartment. Given the fact that Castle has just agreed to Perry’s terms and is coming to Perry’s office in the morning, it seems ridiculous that Perry would not have called out to Stephanie to stop her from going up to meet Castle on her own. Added by Dan K, 24 May 2019.

Move To Strike As Being Incompetent And Unresponsive: As Perry is driving Stephanie away from Castle's apartment and Tragg intercepts them, Perry asks Tragg, "What are you doing in this neck of the woods?", to which Tragg replies, "We work around the clock, you know that." jfh 17Jun2019.

Professional COURTESY: I like the scene where Lt. Tragg apologizes for interrupting Perry/Della's lunch & does the "Favor" of telling Perry his client wants to see him. Despite their different perspectives, the two adversaries RESPECT each other. Mike Bedard 5.5.15

In the background of that scene is some type of office building. I suspect we are on the studio grounds.

Apparently Stephanie was allowed to keep her purse while in custody.

Another title with a very tenuous connection to the story. How about “TCOT Three Gun Monte”? DOD 06/30/20

And RUDENESS I found this episode to be rather unpleasant: the characters spend a great deal of time berating each other (Perry accuses Stephanie of hiding something after having earlier suggested to her father that he was doing the same, Junior while on the stand accuses Perry of duplicity, and in return Perry suggests his wife may be the killer) and the "happily ever after" ending (see below) I found to be more creepy than endearing. Critiqued by Notcom, 082416.

I've been listening to the old X Minus One radio shows, and Joe De Santis plays a number of roles in several episodes .. and that distinctive voice is quite versatile. They're well worth a listen just to hear him! Submitted by MikeReese 7/22/13

Della's file cabinets (you know, the ones with a separate drawer for each letter) sure do get around - they show up in the offices of both Garvin senior and junior. DOD 06/17/19

Joe De Santis was both a murderer and a victim. Submitted by daveb, date unknown.
+ That was stated in the Summary. Submitted by 65tosspowertrap, 4-23-2014.

Joe De Santis has the unique distinction of getting murdered twice, here in this episode and in Episode #54 TCOT Borrowed Brunette, in the same motel (the same exterior shot of the motel was used in both episodes). Submitted by Kenmore 2/02/11

The Tale of the Guns: THIS IS STILL SPOILER TEXT! (Killer named below.) Are you confused about who has what gun when? Here's a summary:

Ending: Happy or Creepy? Stephanie ends up marrying Senior, thus becoming the stepmother of her former boyfriend; although obviously there is no technical wrongdoing, the resultant relationships seem almost incestuous. Sermonized by Notcom, 082416.