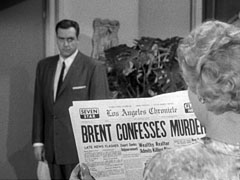 From The Perry Mason TV Show Book
Charles Stewart Brent, the owner of PerryÆs office building, unfairly takes the rap for a murder to cover for his young wife, Anne. Charles has known her for only two weeks, but has already been threatened by a blackmailer to expose her ōtaintedö past. Now he suspects her of murder, but loves her too much to see her in jail.

When Perry proves that Anne is innocent, itÆs such a relief that the lawyer may be in for a rent reduction.

++ Six Degrees of Perry Mason: We have a great instance of "six degrees" with film noir and this episode. I watched The Postman Always Rings Twice last evening, and we have not only the Mari Aldon/Tay Garnett connection, but a young Don Anderson makes a long (although silent and uncredited) appearance in a courtroom scene as the orderly pushing John Garfield's character in a wheelchair, and Morris Ankrum plays the judge. JohnK, 8 August 2018.

Prop: This episode marks first sight of the ōAfrican Maskö that was to appear in PerryÆs office near his desk on the wall by the balcony. Here, the mask is seen in Stewart BrentÆs office along with other African-like what-not. Submitted by billp, 12/25/2008.
+ Also notice the picture of the boats in Brent's office. That picture would be beside the private door in Perry's office starting with episode 62 TCOT Howling Dog. Added by H. Mason 10/20/14

Continuity Error: Immediately prior to delivering his report to Mr. Brent, as Paul is walking through BrentÆs outer office, it is clear he has nothing in his hands. However, when he comes into BrentÆs office, miraculously, he has his report. Submitted by billp, 12/25/2008.

Uncredited Actors: Don Anderson appears as a bartender in the party scene at the Brent home. There Mrs. Brent (Mari Aldon) addresses him as ōDonaldö and gently chides him for making the martinis too sweet. Anderson gets no line in reply and can only look properly sheepish. Submitted by FredK, 2 October 2010.
+ Lee Miller appears as a plainclothesman, presumably Sgt. Brice. Submitted by gracenote, 8/31/2011.

Goof: After 3:30, we see Enid in her bed with perfectly adorned lipstick. Not bad for someone who just had her stomach pumped. Submitted by 10yearoldfan, 7 August 2011.

Character Names: Mrs. BrentÆs maiden name seems to be Rowan, but then it turns out to be King. Dr. CortleyÆs first name is Ottoe. Submitted by gracenote, 8/31/2011.
+ According to the police record her "real" name was "King". In the Sunday article she married as Anne Rowan. Binney's phoney article said "Rowan" was an alias. In the past it was easy for a person who had problems in one part of the country to simply move somewhere else and take a new name. If she did that and didn't legally change her name to "Rowan", then married as Anne Rowan (a phony name), wouldn't that invalidate the marriage? Added by H. Mason 10/8/14
++ See comments in episode 147 about a person being married using an alias. Added by H. Mason 1/16/15
+++ As Gardner himself writes in one of the Perry Mason books "a man can call himself anything he wants, as long as there is no intent to deceive". But marriage under a false name could be deemed to fall under the doctrine of "unclean hands" by a Court of Equity, permitting the aggrieved partner to either enforce or dissolve the marriage at their option. Were it otherwise, the result might be "a marriage that was not binding, and a honeymoon that was!" (as Gardner also wrote in one of "The DA" series of books). Added by cspoleta 3/2/17,

Arthur Binney's name in the original ESG novel is Binney Denham. And Harry Mitchell's is Morrison Brems. Two more examples of Gardner's more idiosyncratic character names being changed, probably because nobody but Gardner could imagine people actually having those names. (See my similar comments regarding Harry Pitkin for Episode #18.) Submitted by BobH, 9 January 2016.

Sightings: There is a plethora of y favorite frequent faces throughout this episode. First, Little Old Lady #2 plays a seated guest at the reception. She reappears, joined by Little Old Lady #1 and Pencil Mustache Man, in the jury box. Meanwhile, Distinguished Gentleman #1 is the court reporter. One of the courtroom spectators, sitting almost directly behind Perry, is Distinguished Gentleman #2, and another in the back is Distinguished Lady #4. Anyone else? Submitted by gracenote, 8/31/2011.
+ Room for one more: a man we call ōSasha Magaloff.ö Submitted by gracenote, 9/1/2011.
++ "Sasha Magaloff" is now known to be the actor Mitchell Rhein. Submitted by catyron, November 16, 2020.
+++ I think that is Distinguished Lady #3 seated prominently at the front of the jury box. Submitted by JazzBaby, 7/24/2019.

Continuity Error: The last gentleman mentioned above magically floats from one seat to another during the trial. Submitted by gracenote, 8/31/2011.
+ He was probably trying to find the acoustic sweet spot. Submitted by vgy7ujm 08/30/17

Incongruous news story: When they show the newspaper article headlined "C. Stewart Brent Marries Miss Anne Rowan in Las Vegas," there's another article to the left, headlined "Sisters Announce Wedding Plans at Bridge-Tea." Whoever made up this fake newspaper didn't know that, one day, we'd be able to pause the video and read the text that goes with that headline: "The present plan again demonstrates before the whole world the great vital force. This plan is a plan of peaceful, economic, and cultural construction..." An interesting way to describe an upcoming wedding. Submitted by Scarter 1/5/14

Incongruous magazine cover: When Binney shows Brent the Expose magazine, it's odd that the cover is a cool avant-garde drawing of a couple in evening clothes at the theater, more fitting for a literary magazine than a scandal rag, and the name "Expose" is in a font with a hand-written look, also more appropriate for a literary magazine. Submitted by Scarter 1/5/14
+ If you zoom in it appears the "EXPOSE" title is cut out and pasted on the "literary magazine". Submitted by Kilo 3/23/2018.
++Paul later tells Perry that Binney had never even had any of his blackmail stories published. Evidently, his targets always folded and paid up without even checking on the magazine's bona fides. Those pages were probably just paste-ups he made on his kitchen table (unless he was an unsold poet who also put out a literary magazine). Submitted by Vladimir Estragon 10/06/2020.

Goof/Continuity Error: At the end's set of scenes when Tragg and company take the killer away (with Perry walking not far behind), Tragg's crew walk into what looks like a staged "hallway" (check out their hat shadows on the wall that should not be there, and they stand there a moment...probably waiting for Perry to catch up for the next camera angle!) before we see just Tragg and Perry walking and exiting the motel lobby, and actually being "outside". It just caught my eye this time watching MeTV. ;-> Submitted by mesave31, 05/06/15.

Good catch. I love how Perry takes TraggÆs arm as they walk off. I suspect it was a spontaneous expression of the real affection the main cast had for each other. DOD 07/01/20

Peggy Knudsen was married to Jim Jordan Jr., son of Jim and Marian Jordan, aka Fibber McGee and Molly. Peggy Knudsen had health issues, and her friend, Jennifer Jones, helped to care for her. Peggy Knudsen passed in Encino CA at the age of 57...MikeM. 8/24/2016

Fay Roope, born Winfield Harding Roope, was the only child of wealthy parents. He was a Harvard graduate...MikeM. 9/14/2017

This is the first of three PM appearances for Wally Brown, who RKO paired with Alan Carney in the comic team of Brown and Carney. RKO hoped they would be another Abbott and Costello. Brown later appeared in 18 episodes of the television series "The Roaring 20's" which starred Dorothy Provine. Wally Brown passed in 1961 at the age of 57...MikeM. 6/6/2018

Product Placement: Brent takes Perry and Della aside at his party, ostensibly to show them a wedding present to his new wife. It's a Thomas organ. He identifies the brand, plays a chord or two and comments on the lovely tone. Later, when Anne's missing earring shows up on the organ, there is an insert shot of the earring, with the Thomas logo dead center. This has to be a product placement, the likes of which would be inconceivable in a couple of years on network television (see my comments on episode 15). Season one has had two or three product placements so far. Pabst (episode 4), Columbia Records (episode 15) and -- maybe -- Biltmore mobile homes (episode 17). Paisano Productions had a nice side hustle going here! OldDave, 7/4/20
+One company name they did not want seen is that of the intercom in Brent's office. There is a piece of tape over it, maybe because the company might not like being associated with evesdropping! Fred Flintstone 12/21/2020.

Another time that the identity of the murderer is not revealed until the final scene. Submitted by PaulDrake33, 6/26/2008.

The title comes from the most persistent misquote from Shakespeare. The actual line: "To gild refined gold, to paint the lily, to throw perfume on the violet, to smooth the ice, or add another hue unto the rainbow, or with taper-light to seek the beauteous eye of heaven to garnish, is wasteful and ridiculous excess." King John, Act IV.

Brent is sapped hard enough to knock him out cold, yet this is never brought up in court.

The Duke of Wellington, when approached by a similar blackmailer, famously replied "Publish and be damned!" DOD 06/06/18

This is one of the early shows, in which a jury is present. Normally, Mason disposes of his cases at a "preliminary hearing," or "probable cause" hearing, a favorable ruling at which precludes the need for a jury. So we can assume in this case Mason did not have his usual success at the prelim. cgraul 7.4.12

Why does Binney slug Brent? This makes no sense to me. Submitted by Scarter 1/5/14
+ It makes perfect sense. Binney was no fool. Although Brent had told Binney that he was going to pay the blackmail, for all Binney knew Brent was actually going to kill him. To eliminate that unpleasant possibility, he slugged him, and then took the money. Submitted by 65tosspowertrap, 4-23-14.

Plot Hole: When Binney shows up at Stewart Brentt's office with all the blackmail material, Brentt had only met his wife 3 weeks previously. He told Perry there was a 2 week courtship in Las Vegas, and then a week honeymoon. Binney arrived on Brett's first day back in his office. But the news that Brett and Anne Rowan had married was only known for a week at the most, not nearly enough time to discover that Anne Rowan was actually Anne King, and that she had a prison record. Submitted by PaulDrake 33. 6 May 2015.

"Richard Erdman: A Tribute." One of my earliest and fondest memories of the PM series is of watching this episode on WPIX-TV in New York in the mid-1960s. And perhaps the most memorable among its charms was the appearance of bantamweight blackmailer Arthur Binney, played so adeptly by Richard Erdman. In addition to numerous terrific movie and TV performances spanning eight decades--most notably in the 1951 film noir "Cry Danger"--Erdman made five more PM appearances and was one of a group of talented guest actors who contributed substantially to making PM such a pleasurable viewing experience. Mr. Erdman passed away yesterday at the age of 93. R.I.P., Mr. Binney. Submitted by BobH, 17 March 2019.
+ I just watched one of my favorite films noir, "The Blue Gardenia", in which Richard Erdman played a newspaper photographer and Raymond Burr was the murder victim. jfh 18Mar2019.
++Pitkined?? Erdman's bio notes he was born in Enid, OK, which is the first name of Barbara Baxley's character...coincidence?? Perhaps; but if so it's a remarkable one. Wondering, Notcom 111320.