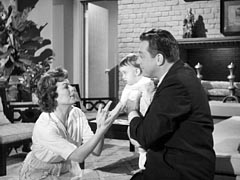 From The Perry Mason TV Show Book (Revised)
Martin Selkirk wants Claire Allison back in a bad way. Claire is no longer interested and is now dating Dick Benedict. Selkirk decides to get Claire’s undivided attention and has Benedict’s jaw broken. Now Claire is terrified, especially since she’s been receiving threatening mail. Claire is almost off the hook when Selkirk is murdered in his beach house. But then the police arrest her for the murder.

Perry takes her case and finds there’s no shortage of suspects. He even questions Selkirk's five-year-old son, since the kid’s favorite toy was a real gun!

When Mason is originally taking his client Claire Allison to see Martin Selkirk at Selkirk’s Oceanside condo, he is driving a 1957 Ford Fairlane Retractable Hardtop. Later during the show, when Perry visits the grandfather Horace Selkirk, he is driving a 1959 Ford Galaxie Retractable Hardtop. I guess Perry had time to buy a new car in between court sessions! Submitted by Walt Broadnax, 12/10/07. Posted by daveb.

Robert Rockwell makes his first of 5 appearances here on Perry playing Dick Benedict. Robert Rockwell made a name for himself in 1950’s television playing Eve Arden’s love interest in Our Miss Brooks. Many years later he was familiar to a new generation of television watchers as the grandfather who offers his grandson a Werthers candy. He and his wife were married for 61 years, a record for any Perry alumni as far as I have been able to ascertain. Submitted by PaulDrake 33, 18 August 2009.

A generation of baby boomers will remember Rockwell as Superman's daddy. The actor portrayed Jor-El in the premiere episode of "The Adventures of Superman" in 1952. Submitted by francis, 2/20/12.

Character Names: The Nurse’s name is Walsh. Not only does Miss Allison address her thus, the caregiver identifies herself on the phone in the hospital. Mrs. Jennings’ full name is Lorraine Selkirk Jennings. Submitted by gracep 9/2/2010.

Sightings: Distinguished Gentleman #1 (in glasses) sits in the back row of the courtroom gallery, on the prosecutor’s side. There is a really good shot of him behind Hannah Barton during the second part of the hearing. Submitted by gracep, 9/2/2010.
+ I believe we also see DG#1 briefly in the opening scene in the restaurant -- in San Francisco -- at about 2:45 on the DVD, as he glances over his shoulder to view the scuffle. JohnK, 14 December 2015 + Meanwhile, our beloved Little Old Lady in a Hat sits on the defendant’s side. We can see her better as the courtroom clears for lunch; she lingers behind a bit. Then as Perry pulls Hannah aside for a chat, she scoots down the hall behind them. After lunch, she reappears on the defendant’s side, on the front row, right next to Dick Benedict. Submitted by gracep, 9/2/2010.
+ “Miss Carmody” is seated in two places in the courtroom. First she is next to Hannah Barton and behind Horace Selkirk on the prosecution side. Later she is next to Lorraine Jennings on the defense side. Submitted by alan_sings, 9 Oct 2010.
+ Distinguished Gentleman #2 appears in a corner of the courtroom gallery in at least one cutaway (when Tragg testifies). Submitted by gracenote, 7/3/2011.

Location: About 5 minutes in and again at the 15 minute mark a car drives up the back way up to Gulls Way in Malibu which is featured in several episodes including #9. The main entrance to Gulls Way which is now owned by Dick Clark is off Pacific Coast Hwy. Submitted by Eric Cooper, 6 January 2011.

+PM got the Coroner to admit that it was possible that Mr. Sellkirk would not die immediately but would have 10 to 12 minutes of mobility before death. PM states just enough time to get from Brentwood to Oceanside. LOL that’s probably 60 miles plus traffic. mikemcs1 7/2019

Painting: The picture in Perry's office beside the private door changed. Submitted by H. Mason 10/21/14

Ring: Notice Della wearing a wedding ring while posing as Perry's wife. She did not wear one while pretending to be Mrs. Fleetwood in episode 35 TCOT Lazy Lover. Submitted by H. Mason 10/21/14

This is the first of two PM appearances for Kathryn Card (Hannah Barton), who was Lucy's mother, Mrs. McGillicuddy, on the "I Love Lucy" show...MikeM. 10/7/2016

This is the second of two PM appearances for Nancy Kulp, Miss Jane (Plain Jane due to the lack of makeup, etc...) from the Beverly Hillbillies. Submitted by HamBurger, 06/09/2018

This is the first of four PM appearances for Dennis Patrick (Martin Selkirk), who was born Dennis Patrick Harrison, and dropped the Harrison surname in the early 1950's. Dennis Patrick died in a house fire in Hollywood in 2002. He was 84 years old...MikeM. 7/19/2018

About three minutes in and again 8 minutes in there is some classic product placement of a very cool American Flyers train set. Submitted by Eric Cooper, 6 January 2011.

A child was permitted to sleep with a real handgun under his pillow? Thank goodness nothing tragic happened to David Brady (David Selkirk), who was probably the only actor to wiggle his ears in closeup on PM. Submitted by MikeM, 11/06/2012

+ I must add that now, Paul going to the day camp and asking about David Selkirk comes across as odd to me; I don't know how audiences viewed the scene on first airing, but these days, any adult coming to a facility and asking about a child had better have some type of authentic credentials to show. Submitted by MikeReese, 12/16/2020

Although I'm sure the printing press was a necessary plot device in this episode, Dirk Benedict's declaration that the printing on the envelopes doesn't look like it was done on a typewriter is, of course, nonsense, because that's exactly what it looks like. Submitted by francis, 7/21/14.

I believe the point about it not looking like it was typed refers to the lack of impression on the paper which happens with a typewriter. A handpress can make the same shape letters without the telltale impression caused by the keys striking the paper. Submitted by KGarrett, 1/6/2016

An object lesson in bad parenting. Not just letting a child think a gun is a toy, but leaving that child alone, sleeping outside, while you drive to the airport! And just who ends up with custody of David? In front of dozens of witnesses, Martin Selkirk breaks Dirk Benedict's jaw while wearing brass knuckles. Uh, felonious assault charge, anyone? The establishing shot of the Jennings house looks like it was taken from the movie “ The Heiress”. The set for Martin Selkirk’s house was seen just two episodes ago in “Petulant Partner” and the gate of Horace Selkirk’s estate was the scene of the car accident three episodes ago in “Calendar Girls”. DOD 07/18/18

Maybe it’s just my perception, but I think Perry looks great in this episode. I’ve always felt he looks particularly good in dark suits, and when he sweeps back the curtain to reveal the body of Martin Selkirk, he cuts a formidable and impressive figure. Submitted by Dan K, 7/8/16.

The wrap-up segment is priceless as Della greets Paul with "Hello, Beautiful!" Then Paul offers to assist Della with babysitting, just like a couple of teenagers. Cute stuff. jfh 07Jul2017.