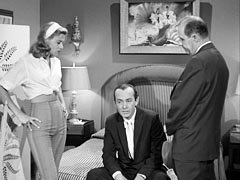 From The Perry Mason TV Show Book
Big city action and back alley crime set the stage for this episode. A bundle is lifted from the Hargrove Finance Company and Frank Anderson is murdered in the aftermath. When old "Pop" Renzi is arrested for theft and murder, he retains Perry.

Paul must question the dead man's widow, who turns out to be a smooth-talking Lauren Bacall type who doesn't like to give a straight answer. Meanwhile, Perry has his work cut out for him, since old "Pop" Renzi has been identified as one of the bank robbers. Our favorite lawyer must prove the police wrong. 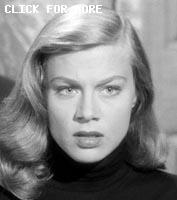 Was that the Dallas skyline in the opening shot, with the winged Pegasus flying over the SoconyMobil building? jfh 23Oct2018.
+ Not the Dallas skyline. The Dallas Flying Red Horse is stationary and flies above the Magnolia Building. The original flew from 1934 until 1999. A replacement was installed in 2000. Kilo 1/1/2019.
++ No, it is, unsurprisingly - I hope - Los Angeles: right of center is the landmark Richfield Building (one can just make out the bottom of the illumiated "derrick" that stood atop it.) So why is there a Pegasus ?? The divisional headquarters of Mobil ...holy dueling trademarks, Batman! Notcom 1/1/2019.

Elisha Cook, Jr. makes his first of two appearances on Perry playing Art Crowley. Elisha Cook, Jr. was an outstanding character actor best remembered for playing Wilmer Cook in The Maltese Falcon. Elisha passed away on 18 May 1995, the exact day that Elizabeth Montgomery died. At the age of 91, he was the last surviving member of The Maltese Falcon. Submitted by PaulDrake33.

Prolific character actress Nita Talbot (the Lauren Bacall look-alike referenced above) makes her only Perry appearance here playing Iris Anderson. Among other television shows, Ms. Talbot was a semi-regular on Hogan Heroes, SuperTrain and The Thin Man. Ms. Talbot had a sister named Gloria who was married to Carl Betz. Carl Betz appeared on Perry in TCOT Sunbather’s Diary. However Carl Betz’s wife was not the famous Gloria Talbott, who spelled her name differently. Submitted by PaulDrake33. 21 October 2009.

Bobby Clark makes his only Perry appearance here as The Pint-Sized Client. Bobby Clark was better known for either Jimmy Grimaldi (the young boy who was afraid of his own mother) in Invasion Of The Body Snatchers or as Casey Jones, Jr. on the early TV drama Casey Jones. Submitted by PaulDrake 33. 3 December 2009.
+ Tempus fugit 77 isn't just an address on The Strip, it would also be the current age of his pintage (as well as the actual age of Clark himself). For those who have trouble getting their brain to wrap around this, keep in mind that a fourteen-year old is a Freshman in High School...so really more like a quart (and well on the way to ending up a full half gallon). Notcom 120921.

Sightings: The Little Old Lady in a Hat watches with great interest from the front row of the courtroom gallery. “Miss Carmody” looks coolly on from the back row. Read more about her and other favorite frequent faces. Submitted by gracep 10/18/2010.
+ Also attending court today is the Little Old Lady #2, Distinguished Lady #4, and Distinguished Gentleman #2 (Burger's side). Submitted by BigBill767, 12/9/16.

Little Old Lady in a Hat is wearing the same hat and dress seen in the opening credits. DOD 06/15/18

Eleanor Audley (playing Lois Gilbert) might seem familiar to Walt Disney fans. She was the voice and the physical model for two animated villainesses: Lady Tremain, Cinderella’s wicked stepmother, and Maleficent, the Mistress of All Evil who caused Princess Aurora to become the Sleeping Beauty. (She plays a more harmless and comical figure here, but that voice is quite distinctive.) Submitted by gracep 10/18/2010.

If you take a good look at the replica safe brought in by Hamilton Burger, you will see that it is the original Hargrove Finance Company safe, badly painted over. Submitted by evelyne 11/02/2010. Some pictures here.

Instead of the mounted plate on the wall behind Perry's desk, the mask is back, as it had been in Episode 40. Also, Della's hair has grown considerably longer in 42 than it had been in 41. I suspect that Episode 41 was filmed prior to Episodes 40 and 42. Submitted by 10yearoldfan, 25 March 2012.
+ Or perhaps episode 41 was shot after 40 and 42 and Della had her hair cut just before 41. Submitted by HamBurger, 10/1/2017
+ The mid-century furniture looks especially great: the table and chairs, the lamp, the desk, and especially that super-cool couch! Rick P 10/4/21

Syndicated cuts: Scene with Mr. Kolichek as Renzi works on his invention and Kolichek informs Gramp that Nicky found $50, Nicky entering and Kolichek leaving [When we see Kolichek comforting Nicky in court, we have absolutely no idea who he is and the first we hear of an invention that will make Gramp money is during Kolichek's testimony]; Tragg's testimony concerning the crowbar, the judge orders it entered as evidence, the clerk marks it as evidence; Crowley goes to Anderson's place for the other half of the hundred dollar bills, Iris gets a call, Crowley leaves thinking it's the police. Submitted by Wiseguy70005, 8/11/12.

The Case of the Moving Chair: At least twice in this episode Paul Drake's courtroom chair is moved so that it is blocking the left swinging gate leading to the witness stand: when Mason is cross-examing Tragg we see views of the chair in its correct place (28:39) but when Mason returns to his chair, Paul's chair has been moved (28:44), perhaps to give Burr more room to get to his chair? The chair can also be seen in its correct position at 26:28 and 36:57 (when Paul enters and sits down) and blocking the gate again as Mason gets out of his chair (31:17) to cross-examine Lois Gilbert. Submitted by Wiseguy70005, 8/06/13.

Torn money: This was the second story that included tearing money in half. It also happened in episode 14 TCOT Baited Hook. Submitted by H. Mason 10/13/14
James Anderson, who played Frank Anderson, was racist rabble-rouser Bob Ewell in "To Kill A Mockingbird" [IMDb: 1962]. Mike Bedard 5.25.16.

"Pint-sized Client" is the only Perry that Raymond Greenleaf judged; he was Edward Norton in "Sulky Girl" & a Rare Book Curator in "Bogus Books" & an uncredited Judge in "Birdman of Alcatraz" [IMDb]. Mike Bedard Memorial Day 2016 MeTV viewing.

This is the first of two PM writing credits for Herman Epstein...MikeM. 9/5/2016

This is the only PM appearance for Eduardo Ciannelli, who was trained as a doctor but preferred singing baritone in operas. Ciannelli was born in Italy in 1888 and passed in Italy in 1969...MikeM. 9/5/2016

+ Eduardo Ciannelli was a busy actor, on Broadway, in movies and on teevee, from the 1930s until 1970. He often played a gangster, but I remember him best as the jazz club owner in the short-lived detective show Johnny Staccato, filmed in gritty New York and starring John Cassavetes. PM alum and jazz guitar great Barney Kessell played in that club. JohnK, 11 August 2022

This is the second of two PM appearances for prolific character actor Than Wyenn (Eddie Merlin), who traveled with a Shakespeare company before moving to Los Angeles after World War II. Than Wyenn would appear in three episodes of "Ironside". Wyenn's last television role was in 1985. Than Wyenn passed in 2015, at the age of 95. He was survived by his wife of 71 years, two sons, and five grandchildren...MikeM. 6/15/2018

With Elisha Cook in the cast, I wonder if anyone noticed what may have been a nod to Maltese Falcon in the ending of the show, as the camera pans from face to face, eventually ending on Charles Hays (Robert Lieb); while not an exact copy of the famous scene, anyone who’s seen Maltese will remember “Wilmer’s” befuddlement and then, horror, as the rest of the players have decided he’ll be the fall guy, and the looks on their faces. Brrr! Of course, Leib just looks crestfallen, but still.. Submitted (and corrected) by MikeReese, 7/16/2012.

About 50 seconds into this episode is a street scene with Hotel Royal and Victory Clothing. The same scene, with the same cars, is also in the 1948 movie The Street with No Name (at about 77 minutes into the movie). The movie has a slightly different view. Maybe the episode uses an outtake from the movie? (And maybe there are better uses of one’s time, like studying law and becoming a high-powered lawyer?) Submitted by masonite, 12/03/2011.

Gramps is found innocent of the murder, but is he still a suspect in the robbery? And how did Perry get hold of the torn bills given to Crowley? DOD 06/28/19
I'm guessing Perry tore his own bills in half to fake out Crowley. Kilo 10/6/2019.

Two bank employees are willing to die to save the bank money -- they must have been well paid! One robber mentions "Pop" and "Crowley," an oddly inept thing to do by an experienced robber (or even inexperienced!) cgraul 3.28.12

How fortunate for Perry that the Hargrove Finance Company for some reason failed to fix its incredibly loud and annoying air conditioner in the weeks or months since the robbery. Submitted by 65tosspowertrap, 4 May 2014.
+ I don't think it was that long. Charles Hayes' wound to his face was still bandaged when he testified in court. So I'm guessing the trial took place just a week or so after the robbery. Submitted by Kilo 4/1/2018.

Eleanor Audley's depiction of 'Lois Gilbert' brought to mind a line from Robert Van Gulik's Judge Dee stories: a witness gives a graphic and highly suspect account of what he saw; Judge Dee later says to his assistants that he was the kind of witness who had no eyes but a fanciful imagination. Submitted by MikeReese, 8/16/2014.

Must we assume Nicky or the police returned the coat and got a refund since Lt. Tragg said all of the money was recovered. It would have been nice to have a line of dialog mention that. Submitted by H. Mason 10/13/14
+ Perhaps it would've been better for Tragg to have said that all the money was accounted for. 23Oct2018
+ I am not a lawyer, but in my opinion, the boy came across the money honestly (although, technically he stole it from the abandoned house, but it seems to have been abandoned for a while) and it would be up to the thief to repay the entire amount he stole (minus the amount that was missing). Or perhaps the bank would have forgiven the amount, considering his actions brought about the capture of the criminal(s).—yelocab 06DEC19

Smoking Perry: in the closing scene, Perry lights up. jfh 23Oct2018.
+ As usual, Perry didn't actually inhale the smoke into his lungs. If he "inhaled" at all it was like a cigar, just pulling the smoke into his mouth then blowing it out. Burr himself was obviously not a smoker. Was he required to play a smoker? In contrast, Wiliam Hopper inhaled deep! An obvious full-time smoker. BTW, I used to love smoking! Glad I quit though. Rick P 10/4/21

In Nicky's second visit to Perry's office, just before Della comforts Nicky, you can see a dark spot on her dress. This wasn't there just before she approaches him. Likely there was more than one take of his embrace of Della. SMLDave 28Jun2019
+ For those of you looking for the spot, it appears in the close-up near the end of the scene, where Della sits on the sofa next to a disconsolate Nicky; it's on the left collar. OLEF641 11/24/2020

Continuity: In the opening scene Crowley finishes his glass of whiskey. In the next shot the glass is full and he's taking another drink. Kilo 10/6/2019.

As a rule, Perry Mason was a world of, and for, adults; the few exceptions to this were mostly unhappy affairs in which over-aged (and in later episodes over-dressed) actors portrayed caricatures that Perry struggled to relate to (or perhaps we should say Raymond and the audience struggled together as a torrent of platitudes poured forth). This episode was a happy departure: the script called for a spunky fourteen-year old who was worldly, but in the end vulnerable as well, and that's exactly what we got. Props to Bobby Clark, Barbara and the rest of the cast for playing it so well. Notcom 112520.