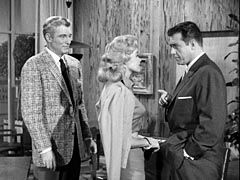 From The Perry Mason TV Show Book
Hitchhiker Claire Olger is charged with grand theft auto and manslaughter when the driver of the car she's riding in hits a truck, killing the truck driver, then flees the scene, leaving Claire to take the blame.

Perry agrees to help Claire and eventually does locate the missing driver. Trouble is, he's dead. Burger drops the previous charges against Claire and files a new one: first degree murder. A second murder only complicates things more.

Oy Gevalt!: At the end of this episode, Lt. Tragg moans, “Oy gevalt” when Mason explains how he cracked the case. This a Yiddish expression that translates as a combination of amazing and awful. Any other examples of Yiddish in the series? Submitted by Rabbi Mayer Schiller, 7/23/2007.
+"Tsuris" by the Hollywood talent agent in the very last episode, and "mensh" by Dr. Hoxie, I believe it's in The Bogus Buccaneer. Submitted by Adam Kamil 6/30/2012\\ ++ That final scene with Tragg neatly shows the camaraderie among the cast that makes Perry such a pleasure. The show lost much of its heart when Ray Collins left. DOD 06/10/20
+++"Oy gevalt!" literally means, "Oh, violence!" and, as noted by Rabbi Mayer Schiller, it is an idiomatic Yiddish expression for a feeling of shock. Tragg uses it appropriately and in context, but where did he learn it? That's a mystery for the ages. Submitted by catyron, November 21, 2020.

At the beginning of the show Perry is wearing a light-colored (maybe it is tweed) suit coat instead of his usual dark-colored jacket. The coat definitely does not match his trousers. Submitted by PaulDrake 33, 10 February 2010.
+He may have been following Paul Drake's lead as many if not all of his jackets never matched his trousers. Submitted by HamBurber, 9/3/2017
++ Not an expert in men's clothing, but I believe when the coat and trousers don't match, the coat is called a "sports jacket"; the style is considered somewhat more casual but still appropriate for most business situations by all but the most uptight -- hence Paul Drake's favoring of the sport jacket. OLEF641 10/23/2020

Uncredited Actors: This episode is another double bill for Don Anderson. In the murder investigation scenes, he wears a pair of glasses and a white lab coat to play a police lab man whom Tragg addresses as “Crane,” though Anderson has no line in return. In the courtroom scenes, he appears without the glasses as a spectator on Mason’s side of the courtroom. Submitted by FredK, 30 September 2010.
+ Was this Burger's Only visit to the Crime Lab? Mike Bedard 4.16.15

Visible Equipment: When Perry and Paul are walking down a hall at the Gateview Hotel, there's visible equipment in the lower right corner. Not sure what it is, probably a microphone, but it swings toward them and wobbles a little up and down. Submitted by Scarter 12/14/13
+ It looks like a microphone to me. Timestamp 17:32. Submitted by catyron, November 21, 2020.

Newspaper: For the first time we see a photo of Perry's client on the front page of the Los Angeles Chronicle. Submitted by H. Mason 9/28/14
+ Yes, Twice: "Charged With Theft And Manslaughter" + "Claire Olger Out On Bail Perry Mason Defending." Mike Bedard 4.16.15
++ Perry Mason didn't know Claire Olger when the first picture appeared in the newspaper so she couldn't have been his client. To be accurate, his client had her photo on the front page only once. Added by H. Mason 4/17/15
+++ I just noticed that the newspaper taken from the rack has the photo of Claire cut out from the first paper and pasted on the front page. As a matter of fact, after Greeley removes the top paper you can see the next paper doesn't have the photo. Also notice that he faked putting a coin in the slot. There was no coin in his hand. Added by Kilo 5/20/2017.

Magnum Pictures: Gerald Heywood and Michael Greeley both worked for that studio. In episode 1 TCOT Restless Redhead Helene Chaney was working on a movie at Magnum Pictures and Perry visited the property. Submitted by H. Mason 10/2/14

Wikipedia states that Herb Vigran had a law degree from Indiana University. MikeM 8/3/2016

Karen Steele was born in Honolulu, US Territory of Hawaii, in 1931. She reportedly was in Honolulu when Pearl Harbor was attacked in December 1941...MikeM. 8/3/2016

Patricia Hardy was Miss Brooklyn, Miss Coney Island and Miss New York Press Photographer. In 1958, she married actor Richard Egan. They remained married until his death in 1987. They had four daughters and a son...MikeM. 8/3/2016

Bad Accent Dept. Another poor outing belongs to Fredd Wayne, who plays Tanner in this episode. In some scenes he even forgets his Cockney accent, such as it is. Submitted by Francis, 5/20/13.
First of four appearances by Fredd Wayne, in each of which he can’t seem to make up his mind to have a cockney accent or not. DOD 06/10/20

Room Rates: The two young protagonists in this episode stay at the Gateview Hotel for $4.50 per night. In 2011 dollars that’s still only $35 and change. You can’t even stay in a fleabag in a small town in rural upstate New York for so little, much less in San Francisco, I would imagine. Even the roach motels around here cost nearly $60. If you want to be safe, expect to pay $100 a night or more (and again, that’s in rural areas). So, evidently, hotels used to be much more affordable in the 1950s (though I’m sure the Gateview Hotel is on the low end).
+ Yes, they were more affordable. $4.50 is below the (single) $5.91 Average Daily Rate (ADR) for 1950 but doesn't seem like fleabag territory. Even the ADR for 1960 was only $10.81 (doubled from 1950!). See here (this link is broken as of 10/2020). Note that the rates have risen by a factor of 1.5 to 2 each decade!
++ In "Runaway Corpse," Ed Davenport stayed at the Vista Motor Court: "Rates $3.50 Up Kitchens" [S1/E10]. Mike Bedard 4.15.15
+++ There was a reason that the Motel 6 chain was called Motel 6 -- their rooms were $6.00 per night. The Super 8 motel chain charged $8.00 per night and promised bigger rooms and cushier beds. I have never understood why motel and hotel room rates rose so abruptly and out of step with other cost-of-living increases. Submitted by catyron, November 21, 2020

Bumbling Media Dept. (tip of the Titfer to Francis above) Just as in episode #17 (Sun Bather's Diary), the 1957-1958 LA media here evidently does not always let the facts get in the way of a good story. In #17, a radio news announcement mentioned "Frank" rather than George Ballard. Here in #19 a newspaper headline and article have Michael "Greely", even though the episode's end credits have "Greeley". Also, according to the "Charged With Theft And Manslaughter" photo caption referenced above, Miss Olger's alleged driving killed a soldier, not a truck driver. Submitted by (lowercase, with a comma and period) masonite, 07/20/13, and updated 2/12/16.
+ Miss Olger was wearing gloves in the car with Michael Greeley, which could have smeared previous fingerprints on the steering wheel and key. After she claimed to be only a passenger in the car, why didn't the police check for any clear fingerprints on the steering wheel, key, and door handle? Or any substance transferred from the pedals to her shoe? lowercase masonite, 2/12/16.

Missing prop: When Perry and Paul were in the hotel room with the police a painting could be seen on the wall in the hallway. It wasn't there when they got the chair to look into the room. Submitted by H. Mason 9/30/14

Rainy Season: It rains in this show, so we get a chance to view Perry’s stylish raincoat. Note the handsome checked lining. Submitted by gracep, 17 December 2010.\\ + This episode always makes me think of the 1972 song It Never Rains in Southern California by Albert Hammond. Submitted by H. Mason 10/13/14
++ According to Wikipedia, "Downtown Los Angeles averages 15.14 inches (384.6 mm) of precipitation annually, which mainly occurs during the winter and spring (November through April), generally in the form of moderate rain showers, but sometimes as heavy rainfall during winter storms." As soon as I saw the rain, I told my wife there had to be a reason for it. There was. :)
+++ The Rain helped place some evidence in Perry's office. Mike Bedard 4.16.15
++++ The same "rain" scene in Perry's office is a very rare instance where, when Perry bums a cigarette from Tragg, he obviously inhales and then actually exhales smoke from his nose and mouth while speaking. Joe B. 07/01/2019

+ I can’t think of another episode in which Perry spent so much time with a cigarette in his hand. DOD 06/10/20

Rooms with transoms: In this episode along with others, once again they were looking through a transom. In this case, Perry is looking into the room. I cannot believe a female roomer (thinking modern times) would have an open transom that one could readily peek in as well as hearing everything from the room or hall. I realize this was before air cond, etc. Submitted by Perry Baby 11/19/14

The plaque in Burger's office said, "Twenty Third _______ Award." Did anyone make out the 3rd word? Mike Bedard 4.16.15
+The missing word: MARSHALL. That award was used as an establishing shot to let viewers know we were in Hamilton Burger's office. In episode 10 and many after this story a door sign was used. Added by H. Mason 4/17/15

Bus Stop Confidential When Mrs. Greeley is questioning Paul on how her husband could have gotten home from the accident, he replies that there was a bus stop nearby, and "there's also hitchhiking"; keep in mind the location was a(n apparent) back road more than twenty miles from LA - by the road sign seen earlier - and at night...apparently public transit was a lot easier in the 50's. Commented by Notcom, 080416.
+ Yes, there are several episodes in which buses or cabs magically appear at the most unlikely times and places. DOD 06/10/20

Big Ape Love it when Doris calls Tragg a "big ape" when he pushes the door open with his warrant. Submitted by HamBurger, 9/3/2017

I'm not sure why Michael Greeley is described as blonde. Claire Olger has only seen him with his hat on and his exposed sideburns and hair on the back of his neck appear dark. When his body is found his hat is off and again his hair appears dark. Submitted by Kilo 3/9/2018.
+ Some darker blonde hair photographs as darker than it is on black-and-white film -- or the line was written before the Greeley part was cast ;-) OLEF641 10/23/2020

Seems to me Claire Olger would most definitely want Greeley alive - would have been easier to prove her story true.
+ Agreed. I could see no motive for her to kill him except self defense, if he threatened her. No motive was ever articulated by the prosecution, strangely enough. Submitted by JazzBaby, 7/7/2019.

At one point Perry suggests the police theory would be that Claire killed Greeley because he would claim she was driving the car and was responsible for the accident. More than a bit iffy, but we’ve learned to forgive such things with “Perry Mason”. DOD 06/10/20

Double double trouble Second consecutive episode where the killer murders two people, and in both cases one of them was a scheming manservant. Submitted by Notcom, 080416.

The Roads Not Taken This episode is an example of one where an intricate chain of seemingly corroborating events is laid out, but then there's a surprise twist which throws everything out of whack: if, as we learn in the end, Greeley actually took the car from the hideaway, leaving his wife and Heywood marooned, then the latter having reported it as stolen makes little sense; when was this report made?? long distance from Fresno?? hours...maybe days later when he returned?? - and for what purpose?? How did Greeley get from the airport to the cabin?? Did he rent a car, leaving it there?? did he take a cab?? either one would have left a paper trail; a friend could have given him a ride, but it's left unexplained. Notcom 102320.