From The Perry Mason TV Show Book
Ever since her husband died, Reba Burgess has managed his mine, located in Burgess, California. When things were slow, Reba kept the business going by securing loans, using a shoe-box full of uncut diamonds as collateral.

So when Carl Bascom, a shady business associate of her late husband, claims to have a signed agreement giving him a half interest in the mine, Reba contacts Perry. Paul travels to Burgess to check up on Bascom and is there when the man's body is found, shot and floating in a mining sluice. When the murder weapon is identified as belonging to Reba, Perry takes up her defense. 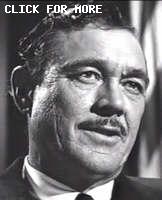 Oklahoma born Ben Johnson makes his only Perry appearance here as Kelly. Ben Johnson won the Academy Award in 1971 for Best Supporting Actor, playing Sam The Lion in The Last Picture Show. Submitted by PaulDrake 33, 14 October 2009.
+ Johnson got his start in movies as part of John Ford's stock company, and eventually appeared alongside John Wayne in eight films, including Fort Apache and She Wore a Yellow Ribbon. He once said of himself:
"Everybody in town's a better actor than I am, but none of them can play Ben Johnson." OLEF641 8/2/21

The Judge in this episode is played by Harry Stanton. This is not the more famous Harry Dean Stanton, who was 25 years younger than the judge. Submitted by PaulDrake 33, 14 October 2009.
+ Harry Isaacs Stanton was 1 of 9 actors who Judged 2 Perrys (his other case was Careless Kidnapper; IMDb: 45 Actor credits]. Mike Bedard 4.17.15

Roy Barcroft was the king of Republic Pictures' bad guys, playing many Western villains -- and even a Martian, in "The Purple Monster Strikes" movie serial, before going on to play a good guy in the Mickey Mouse Club's "Spin & Marty" series. Submitted by scarter, 5/6/15
Sadly, Douglas Lambert ("Kinder") succumbed to AIDS in 1986, at 50. Rick P 10/20/21

Character Names: Malone’s first name is Sal; Bascom’s is Carl. Reelin’ Pete’s real name is Peter Bridwell. Submitted by gracenote, 4/15/2011.
+ALSO: Eight characters in the story were given a last name but no first name, including the killer. Added by H. Mason 4/13/15
++ Actually, Malone's first name is Mal. jfh 03Feb2017.
+++ During court (32:01 of the 2012 Paramount DVD), Prosecutor Clark calls for what sounds like, and is per the subtitle, Peter Bridewell. (Speaking of calls: Fingernails on a blackboard would sound like the call of the lark, compared to Clark's voice.) lowercase masonite, 04/20/16.

Names: This episode was the tenth time the murderer wasn't given a complete name. That doesn't include #85 where it wasn't sure if the killer used a nickname or if his parents gave him a different name. It also doesn't include #165 where the guilty person used a stolen identity throughout the story and a "real" name was never given. Submitted by H. Mason 4/13/15

Continuity: Bascom goes into the bank to request that he be allowed to examine the vault again. As he approaches Mal, a woman in a tartan (?) skirt in the medium distance walks away from a plinth and towards to door. Scene briefly switches to Mal and then back to Bascom. When it switches back, the same woman makes the same move again - by which time she ought to have been exiting the bank's front door. Submitted by Clothears, 14th Aug 2020.

Sightings/Uncredited Actors: Both Distinguished Gentleman #1 and Don Anderson appear as spectators in this out-of-town courtroom. Submitted by gracenote, 4/15/2011.

Location: Can't say for sure but I think the Burgess Mine is actually one of the entrances of the Bronson Canyon Cave which was used in tons of movies but most famously as the Bat Cave. Submitted by Eric Cooper 24 August 11

This is the only PM appearance for Audrey Totter, who had recurring roles on a few television series...MikeM. 2/3/2017
+ How quickly the famous are forgotten! Audrey Totter wasn't just an occasional TV actress; she was a talented, sizzling femme fatale in film noir classics such as Lady in the Lake and The Postman Always Rings Twice. (Do watch them if you haven't seen them!) Still looking gorgeous here! She and Bruce Bennett, Olympic athlete and early Tarzan, make a delicious couple! Submitted by JazzBaby, 6/10/2019.

This is the only PM appearance for prolific character actor Jeff Corey, who served in the US Navy during World War II. After he was blacklisted in the 1950s for refusing to name names, Corey became an acting instructor, with many famous actors taking his classes...MikeM. 2/9/2018

Jeff Corey made many, many appearances in television and films. Perhaps most notably in John Wayne's "True Grit". He also turned in a remarkable performance in the Outer Limits' classic "O.B.I.T." Submitted by Kenmore 01/03/2022

This is the second of two PM appearances for Lenore Shanewise (Mrs. Munger), who was a personal friend of Raymond Burr from his days at the Pasadena Playhouse. She would later appear in two episodes of "Ironside"...MikeM. 6/15/2018

The Cars: All those older cars in the opening street scene -- and no Gary Woloski to identify them. Sigh. Submitted by catyron, June 23rd, 2018

An unintentionally funny moment about 19 minutes into the episode. Seconds after the 3 men enter a darkened cabin there is an embarrassing eruption as if someone passed gas. I'm sure it's probably the door closing off screen but it doesn't play that way. Submitted by Eric Cooper 12 August 10.

And a subtle moment after Bascom shake Malone’s hand in the bank - and the camera zooms in on Malone’s hand as he wipes it on his jacket. DOD 03/19/21

Reba Burgess just happened to be poking around a cave and finds a million dollars worth of diamonds just laying there? I don't think it works that way. Several times during the trial the camera closes in on a little old lady, suggesting she is somehow involved, but not so. It may be Lenore Shanewise who was our suspect in TCT Fiery Fingers. DOD 02/21/19

The actor playing the prosecutor is evidently a summa cum laude graduate of the Virginia Field of horrendous overacting! He's not enough to spoil an overall well-acted episode, though. Ed Zoerner, 1/29/12
+ Donald Buka's horrendous performance could be attributable to at least one of two intriguing possibilities:
(1) He watched reruns of the overwrought prosecutorial histrionics of Terry Becker as Everett Ransome in TCOT Violent Village (#80), or
(2) He obtained advance previews of Don Adams's comedic delivery in "Get Smart" and didn't realize the show was a comedy. (See, in particular, the first season episode of "Get Smart" entitled "The Day Smart Turned Chicken," where Max has to defend himself in court. If it was chronologically impossible for Buka to be channeling Don Adams, it certainly appears that Adams was channeling Buka.) Submitted by BobH, 16 June 2018.
++ He must have been good to work with though as he later appeared in an Ironside episode. Maybe they thought they owed it to him for allowing his ham performance. DLH 3/5/20 He reminds me of one of those marionettes in “Thunderbirds”. DOD

The Perry Mason theme in the credits at the end was a different arrangement than previous shows Season 7 Vol 1, PerryBaby 6/12/13
+ That arrangement was in the previous episode, too. It sucks. Submitted by catyron, lover of the ORIGINAL arrangement, June 23rd, 2018

The MeTV version cuts out the first couple of minutes of the armored truck on the way to the Burgess Ranch. Ed Zoerner, 12/23/13
+ I too have been watching the butchered MeTV Perry broadcasts. Forty-five minutes of Perry; fifteen minutes of promos and ads for reverse mortgages, catheters, Medicare, and ambulance-chasing lawyers. Submitted by Alan Smithee, 12/26/2013.
++ I have been watching the MeTV broadcasts. I have the captions on and someone did an overzealous search-and-replace of 'bad' words. The characters go out for xxxxtails (cocktails), there are many suxxxxious (suspicious) people around. I can't remember them all, but there was one notable episode where one of the main characters was named 'Dick'. In the captions his name always appeared as 'xxxx'. —yelocab 02JUL18
+++ That's an example of mechanical "search and replace" censorship, where a program meant to be used on recent theatrical release movies, which are full of "words you can't say on television", was used on a television show from an era when such words would never have made it into the script, and many of them never made it into daily conversation. OLEF641 8/2/21

Polek tells Bascom that he ID'd Perry from his license plate. I'm surprised Paul, a private detective who conducts undercover/covert operations, would have his car registered in his name, and that he would use it while on a mission. Submitted by 65tosspowertrap, 12/27/2013.

A Sign of the Times: When Perry is in his hotel room he calls the front desk and asks who is in the room across from his. They tell him. I don't think they would in today's security-obsessed world. Submitted by Duffy, 6-4-2014.
+ It's Paul who calls the front desk and asks (about 17:43 of the 2012 Paramount DVD). Despite the armored guards outside the bank at the beginning of the episode, Burgess seems like a trusting town. Per Polek, during the court testimony (about 36:42 onward), "Someone claiming to have an appointment with Bascom, someone highly respected in this town, was given a key to his [hotel] room to wait for him there." lowercase masonite, 4/20/16.

Question: How did Della get to Burgess, California? Perry drove, Paul flew and Della appeared in court. Submitted by H. Mason 4/13/15
+ It looks like Paul was the one who drove. See above, "Polek tells Bascom...". Per Polek's conversation with Bascom (15:57 onward),
"Name's Paul Drake. Private detective....Got it from his car license. Pretty easy to spot a bird like that, snooping around town. Worked for some big time L.A. lawyer. Mrs. Burgess's lawyer. Name of, uh, Perry Mason."
After the murder victim is discovered, the next scene is of a plane flying (22:38), then Paul greets Perry in Perry's hotel room, evidently shortly after 3:30 AM. (Don't the residents mind the late-flying planes?) Della could have flown in with Perry. She of course would have her own hotel room. She shows up in court at 27:50. lowercase masonite, 4/20/16.

A Feast for Old-Movie Buffs: This might not be the best PM episode, but it certainly has one of the best guest casts, especially for fans of 1940s and 1950s film noirs--Audrey Totter, Bruce Bennett, Ted de Corsia, Jeff Corey, and the great Elisha Cook--and Westerns--Roy Barcroft and Ben Johnson, the latter of whom seems never to have given a bad movie performance. Submitted by BobH, 17 January 2018.

Audrey Totter seemingly tries to play a hard-bitten widow, but becomes noticeably warm-hearted near the end. Whatever the actual reason, the producers look good by giving her and Mason favorite Bruce Bennett a scene of their own, alone, at the end of the episode. lowercase masonite, 4/20/16.
+ Yep. That was sweet. Submitted by catyron, Herman Brix fan, June 23rd, 2018

Great Detective Work On the very night of the murder, police find the murder weapon 'buried in about 3 feet of tailings concealed under a muddy refuse that wouldn't ordinarily be touched again' - because of course that's one of the first places you'd go looking... submitted by BellaDella 16 June 2021