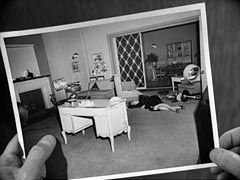 From The Perry Mason TV Show Book (Revised)
When a newspaper executive and his brother drown during a fishing trip in Canada, the deaths set off more repercussions at the Los Angeles Chronicle than a paperboys’ strike.

Paul enters the office and reports some new information. Misunderstanding, Perry responds “The applicable law is the Uniform Simultaneous Death Act, Section 296 of the Probate Code, Paul.” There is indeed such an Act in the Probate Code. Section 296 doesn’t exist today but likely did in Perry’s time. Submitted by Steve Fox, 11/11/2004.

In many episodes of Perry we see a newspaper headline. It is almost always a copy of the fictional Los Angeles Chronicle. In this episode we are taken inside the offices and ownership of the Chronicle. During the show it is revealed that the Chronicle is wholly owned by Adam York and has been for years. Submitted by PaulDrake33, 3/6/2009.

Sightings: The ubiquitous Little Old Lady in a Hat appears in the courtroom on the prosecution side, middle row at the far end. She can be seen during a cutaway when D.A. Burger questions Tilden Stuart (Denver Pyle) on the stand. Also, Quiet Old Man #1 sits behind Boyd Allison (Theodore Marcuse). Submitted by Kenmore, 9/19/2010.
+ And let’s not overlook “Miss Carmody” sitting behind the Quentin family and next to the curious Pencil Mustache Man. We also see Quiet Old Man #2 as the courtroom clears for lunch. Submitted by gracep, 11/21/2010.
+ Little Old Lady #2 also finds her way among the courtroom spectators. Read more about all of these and other favorite frequent faces, and help us spot more! Submitted by gracenote, 9/21/2011.

Uncredited Actors: Robert Wegner almost goes unseen as the jailer/bailiff watching over young Davies in jail. And I think I spy Bert Stevens in the back row of the courtroom gallery. Submitted by gracep, 11/22/2010.
+ Another surprise is the venerable Sam Harris as a courtroom spectator, just one of 514 appearances in cinema and television. (Appearance on Uncredited Actors page TBD.) Submitted by gracenote, 9/21/2011.

Lee Giroux (Newscaster) frequently played newscasters and the like throughout his career. He died relatively young, at age 62. Submitted by gracep, 11/22/2010.

NO CARS, but there is one Helicopter. A bright-yellow US Coast Gaurd Sikorsky HO4S "Chickasaw" is shown during the Search & Rescue narrative early in the episode. Boom lowered for rescue shown here. The HO4S-1G and 2G models entered Coast Gaurd service in 1951. The machine remained in USCG service with models up to HO4S-4G until 1966. History at this USCG pdf. With Interservice Standardization, HO4S became HH-19G in 1962. Added by Gary Woloski, 1/3/13.
+ The very earnest newsman tells us that "Royal Canadian and American Air Force helicopters are combing the area." The only problem: it's a Coast Guard 'copter shown. Why don't they get any credit for helping? And how do we know it's bright yellow? It's a black-and-white program. With tongue firmly planted in cheek I sign myself -- OLEF641 3/19/21

Sound Problems: Two sound issues on the CBS/Paramount season set (or perhaps on the original episode): At 5:28 when Joe Davies first refers to Boyd Alison by his name, the volume drops when he says 'Alison.' Then at 8:36 when Davies says (according to the closed-captioning) "Kerry...it worked like a dream" the words "it worked" are hard to hear. Submitted by Wiseguy70005, 11/24/14.

Claire Griswold may be the only actress to have her Twilight Zone appearance colorized. In the hour-long rarely seen episode "The Miniature" (because of legal reasons the episode has never been seen in regular syndication) her scenes as a doll seemingly come to life in a dollhouse were colorized for a 25-year anniversary special in 1984. (Robert Duvall also appears briefly colorized in a scene.) The Sci-Fi Channel (SyFy), who got the rights to this and other episodes never seen in syndication, has reportedly shown this episode in both the B&W and colorized versions. Presumably if the series becomes available in syndication again (SyFy has had exclusive rights since 1994) the episode would again be unavailable. Submitted by Wiseguy70005, 11/24/14.

This is the first of six PM appearances for Parley Baer, who gave the 1969 eulogy for Howard McNear, Mayberry's Floyd the Barber...MikeM. 12/28/2016

This is the first of three PM appearances for Bek Nelson, who appeared in nine episodes of the Lawman television series as "Dru Lemp"...MikeM. 9/27/2017

TCOT Malfunctioning Wardrobe: At about 11 minutes on the DVD, Paul Drake enters Perry's office wearing what I call his Jackson Pollock sport coat. There's a cut to Perry at his desk, and as Paul walks across the office back into the shot, presto! He's wearing the brown hound's tooth check model. JohnK, 26 December 2017 + Great suit-spotting! Thanks! Submitted by catherine yronwode 1/19/2018.
+ And his tie changes, too. From solid to striped. Submitted by Kilo 6/24/2018.

Bonnie, may I "Bonnie Mae" will also be the name of "cranky dowager" character in the later episode TCOT Bullied Bowler. Although perhaps not the rarest of names, it doesn't really seem like the most common either, so one wonders if there isn't an inside reference. Pondered by Notcom, 011818.

Irene Hervey and Jan Merlin were also both in the earlier episode - The Case of the Black-Eyed Blonde. She played his mother in that episode where they are connivers. In this episode she plays his nice aunt but he is still a conniver. Type casting:)

At roughly the 20:30 mark of the episode when Perry holds up a piece of paper while telling Della about the wire for the stock holder's meeting should include the DA, you can see a fly buzzing around Perry's fingers. Della needs to get a fly swatter as well. Submitted by Kenmore 01/29/2022

The picture of managing editor Tilden Stuart displays during the broadcast does not look anything like actor Denver Pyle, who played the editor! Submitted by gracep 11/21/2010.
+ As a Denver Pyle fan, I've carefully checked the News Broadcast photo that gracep questions by pausing a taped analog broadcast. From this alone, I'm quite sure that it is a photo of Denver Pyle, but one that was taken 5 or more years before this episode was filmed (while his hair still had colour!).
I've also checked this while viewing the DVD on a computer media player. Note that the DVD viewed with a computer media player (rather than TV) will yield the clearest, highest-resolution images. The computer media player also displays the complete image stored on the DVD; the outer edges are not cropped due to overscan (an inherent TV technology bug). Added by Gary Woloski, 9/8/11.

The image appears to be a much younger Denver Pyle before his hair was silver. Submitted by Perry Baby 1/10/16

Priorities Are In Order Dept: Hamilton Burger, referring to the murdered woman: “Kerry Worden was a double-crosser all right…But, she was a VERY attractive woman.“ Submited by cgraul 10/24/2011.

Priorities Part II: Three geezers out in the north country rapids with no guide? And no life vests? What were they thinking? The cost of that multinational search-and-rescue operation must have run into the thousands. Actually, they weren't that old: an IMDB search reveals that the actor playing Tilden Stuart was just 40, and the Adam York guy 45. People sure looked old then. JohnK, 11 October, 2015

A rarity in this series, Perry cracks a joke in court, this time while questioning a witness about his arranged engagement. Submitted by francis, 4/22/12.

No advance notice: Della sent a message to the stockholders, Mr. Alison and Hamilton Burger about a meeting at 8:00 that night. It's a good thing everybody could drop everything to be there. Submitted by H. Mason 11/11/14

Busy lunch break: Did Perry, Della and Paul gather all the information they needed to solve the case and make that display during the adjournment? Submitted by H. Mason 11/11/14

And they published Happily Ever After Though the writers should - perhaps - get credit for not leaving loose plot threads dangling, their resolution to the Chron's financial problems is so contrived I think it might have been better if they left it out. Submitted by Notcom, 121715.

Don, the Operative In a seemingly extraneous scene, Paul sends a pint-sized operative named Don to obtain information by posing as a photographer. My guess is that the scene was intended as something of an inside joke, saluting ESG's A.A. Fair mysteries, which featured pint-sized detective Donald Lam. Submitted by BobH, 12 February 2017.

I find this one of the creepiest, most unpleasant episodes ever. I don't think we've ever seen as many viciously greedy people conniving and competing against each other in such complicated, ever-shifting maneuvers in any other episode! Submitted by JazzBaby, 9/10/2019.

I was also distressed by the seemingly virtuous campaign to develop the slumland. Not one mention made of providing good, live, affordable housing to the current poor people living there. With a fancy marina attached? Sounds like a typical shove out the poor and build a nice, middle class housing development plan! Submitted by JazzBaby, 9/10/2019.
+ I was highly amused to see where on the map the writers situated the 'dirty shanty town' of "Derrick Flats." First, it is anything but flat, being the easternmost end of where the Santa Monica Mountains meet the sea. Secondly, this is a VERY tony neighborhood called Castellammare; J. Paul Getty's villa is there, which is now a museum holding his collection of antiquities and modelled on a villa excavated at Pompeii. https://www.getty.edu/visit/villa/ OLEF641 3/19/21

After barely surviving that boating accident, our villain was able to carry a body two miles through the woods - with a broken arm? Uh, OK DOD 10/09/18

+ He did not say how or when his arm broke. Though he told his rescuers that the other two fisherman were both dead, why didn't he at least stay by the fire? Also, why was Perry the only one to draw the correct conclusion about Prentice York's broken leg in relation to York's hands and boots? Submitted by (lowercase, with a comma and period) masonite, 03/08/19.

Mason enters the board meeting carrying a briefcase, puts it on a chair, and not once opens it or refers to any papers or documents that maybe would have been in it. It is such an obviously empty prop to make him "look lawyerly." cgraul 4.26.21

Why do Perry's clients ALMOST ALWAYS pick up the murder weapon (leaving f-prints) when they come across a dead body? cgraul 4.26.21