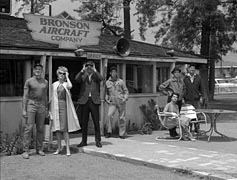 From The Perry Mason TV Show Book
Two girls from Argentina cause quite a stir in the US. Lola Bronson, a real spitfire, and cousin Conception O'Higgins are in court to settle Lola's divorce from Jeff Bronson.

The couple are glad to be rid of each other until pilot Bill Ryder sabotages the test flight of Jeff's prototype airplane, bankrupting his business while also making a play for Lola.

When Bill is found dead with one bullet in his body and two others lodged elsewhere in the room, both Lola and Jeff are suspects for the murder. Now the same two people who battled out their divorce in the courtroom are battling to cover for each other.

Ben Wright makes his third and final appearance here as Clarence Keller. Ben Wright was a famous voice actor on radio in the 40s and 50s. Although he was English by birth, he portrayed Paladin’s Chinese assistant, Hey Boy, on the radio version of Have Gun Will Travel. Submitted by PaulDrake 33. 8 January 2010.

Location: The brief establishing shot showing the Los Angeles airport passenger terminal near the intersection of Airport Blvd. and Avion Drive appears to have been lifted, in part, from #96, TCOT Treacherous Toupee. That’s actually Paul Drake and Dick Hart in the car. Posted by daveb, 3/2/2010. Some pictures here.

Location: Street numbers in Perry Mason episodes are usually real. Consequently based on the “12930” on he Bronson Aircraft shack and the overall topography I would say this location is probably 12930 Pierce Street along side Whiteman Airport in Pacoima, CA. Whiteman Airport is a small airport some Hollywood stars used which is tucked in the north east corner of the San Fernando Valley next to mountains which are visible in this episode. Posted by Eric Cooper, 25 March 2010. Some pictures here.
+I'm pretty certain that building is actually in the airport grounds on Airpark Way (not Pierce), and is now a diner. Submitted by KGarrett 02/17/2016

Character Names / Anomaly: The “Pathologist” listed in the credits is addressed by Hamilton Burger as “Mr. Willard,” and the “Astronomer” as “Mr. Finney.” Perry refers to the Trial Judge as “Abernathy.” Why their names were left out of the closing titles, or why the D.A. failed to address the pathologist as “Dr.” is a mystery. Submitted by gracep, 11/19/2010.
+ Hamilton Burger addresses the “Pathologist” as “Dr. Willard”. Submitted by BobwloCB, 8/19/2014.
+ For some reason on the CBS/Paramount season sets the astronomer's name is spelled in the closed-captioning as Phinney not the usual Finney. Submitted by Wiseguy70005, 11/09/14.

Sightings: Today we see have quite a few courtroom regulars seated in the gallery today. In one cutaway to the Argentinian sisters, we see the beloved Little Old Lady #1 (with her usual hat), Distinguished Gentleman #1 (with glasses), Pencil Mustache Man, and possibly “Miss Carmody” watching evens unfold. Quiet Old Man #1 is on the other side of the aisle. We can also discern another little old lady from the Style P credits, who is dressed all white and sporting a big hat. By now you are asking yourself, just who are these people? Submitted by gracep, 11/19/2010.

+The Distinguished Lady #4 is seated next to LOL #1 in court. The Quiet Old Man #2 and The Thin Man join the court for the last hearing. At the airport, we spot the Pencil Mustache Man talking with Distinguished Gentleman #1. Bill767, 1/6/16.
+ “Miss Carmody” is definitely seen to the left of Lola when Lola stands and speaks.

Of the many background cars, I believe these were intentionally placed in the camera's view:

Three Airplanes in One: The airplane situation is dire, indeed.
* The first plane that Bill and Lola take off in is seen at at 3:57 - 4:08. It taxis by at 7:03 with one person inside. It goes aloft at 8:08 - 8:13. It is white on top with a medium thin stripe at mid-line and a light-medium belly. The wing number is N3575D.
* At 9:18, when Bill and Lola are in the air, the plane is dark on top and has multiple stripes: dark top, white mid-line, thin dark mid-line, and white belly. No N-number is visible. It is flying over uninhabited terrain. The sound in this clip is similar to the audio-files in the contemporaneous show "Sky King.'' We cut to inside the plane at 9:20 and the engine noise changes.
* From 10:32 - 10:40 we see Bill and Lola in a plane that is white with a medium mid-line stripe, a white belly, and an N4680E wing number. It does acrobatic stunts.
*And that's not counting the jaunty test-plane or the diving model plane that crashes. Submitted by catherine yronwode 1/19/2018.

Judge: Sydney Smith was listed in the credits as "Trial Judge". It was a preliminary hearing. There is a difference between a hearing and a trial. Submitted by H. Mason 11/10/14
+ That was to distinguish him from the other judge in the episode, the divorce judge, who also presided over a hearing. The second hearing looked more like a trial so the word trial was used in the credits so that viewers would know one from the other. Submitted by Wiseguy70005, 11/29/14.

Aviator's Abode: The boozy test pilot, Bill Ryder, lives in a house that is quite upscale -- French doors, even -- and lovingly decorated in American Colonial style. I would have expected a grubby apartment dotted with a few empty bottles and cans. JohnK, 10 October 2015

That Guy in the Sky following in the mulesteps of Frankie Laine, 50's pop singer Guy Mitchell (nee Albert George Cernik) makes his PM debut here. As with the former, his performance is neither brilliant nor terrible, and the writers somehow avoided the temptation to squeeze in a few gratuitous songs. Submitted by Notcom, 121715.

+ Conception's necklace collection looks to me to be the same at the two times, with the later look only straightened out so that the strands no longer overlap. I do wonder why she and Lola were sitting in their apartment dressed to the nines, with all of their jewelry, unless they were planning to go out nightclubbing later. Submitted by (lowercase, with a comma and period) masonite, 03/08/19.

This is the first of two PM appearances for Barbara Stuart, who was once married to actor Dick Gautier, who played Hymie the Robot on the television series Get Smart...MikeM. 12/27/2016

This is the only PM appearance for prolific television actor William Mims, who would appear as "General Grant" in three episodes of The Beverly Hillbillies...MikeM. 9/26/2017

After the divorce hearing, there is a man to whom Lola Bronson says, “Thank you for your help, Mr. Gilman.” The man receives no credit, however. I wonder who he is? Submitted by gracep, 11/19/2010.

According to this Fred Danzig article of 14 June '61, the Second Annual TV Guide Award Show aired on NBC on Tuesday 13 June, three days after this final episode of Season 4:

Summary Error: Bill is not found with three bullets in his body. According to Lt. Tragg, one bullet was found in the body, one in the wall, and one in a log in the fireplace. Submitted by ace, 8/10/12. 10yearoldfan corrected the summary on 29 December 2012.

No Accent Dept.: For someone whose family has lived in Argentina "for generations," Lola, like her cousin Conception, exhibits not the slightest trace of Spanish influence on her speech. Submitted by francis, 9/24/14.
+ Actually Conception does make a few attempts at sounding non-American. But it's not convincing. Working on this episode was noted voice actor Ben Wright, but I imagine that in the few days they had to make these episodes there was no time for accent training. JohnK, 10 October 2015.
+ And wouldn't the cousin's name be Concepcion (with an accent on the last syllable), rather than Conception? JohnK, 10 October 2015.
++ Names can be spelled many diifferent ways, says Janis with an "s". As to the accents, Faith Domergue was born in New Oeleans, Louisiana and has an interesting accent all her own, as evidenced in the movie Where Danger Lives (1950) also starring Robert Mitchum and Claude Raines. jfh 16Jan2018.
+++ This is the first of two Perry appearances for Ms. Domergue; the second of which is episode 178 "The Case Od The Greek Goddess" in which she is murder victim, Cleo Grammas. jfh 16Jan2018.

Bon Voyeur: For a character identified as an "astrologer," Burger's creepy witness spends a lot of time peeping into private residences, it would appear. During his "usual sweep of the sky and the city," he's somehow able to identify people going into and out of one particular house in Los Angeles, and even provide a license plate number! This is really stretching it as a plot device. Submitted by francis, 9/24/14.
+ I suspect his creepiness was deliberate, not accidental. 'Astronomer', my eye ... but since he did give the police some evidence, I guess they decided, that THIS time, he wouldn't be up for a vice charge .. Submitted by MikeReese, 12/28/2016
+ That would be "astronomer." An "astrologer," one who purports to tell people their future based on where and when they were born, might be expected to be one who peeps into residences. Submitted by Wiseguy70005, 11/09/14.

Surely the many people watching the test flight would have seen that the plane did not start breaking up as Ryder claimed. DOD 10/18/19
+ The Civil Aeronautics Board would have had no problem in proving that the aircraft came down in one piece, and that the crash was the fault of Bill Ryder. In fact, testimony from a CAB investigator should have been a prominent part of the trial. Submitted by vgy7ujm on 13 June 2020.

This episode has the classic murder mystery clue of the broken glass at the point of entrance. Too bad all those criminals have not figured out that the broken glass needs to be hit from the outside (so it falls inside) to make it look like a burglary. Submitted by HamBurger, 09/28/2014

At least to me, Lisa Gaye (Lola Bronson) in this episode looks, sounds and even acts like a young Kirstie Alley (pre-Cheers). Submitted by Wiseguy70005, 11/09/14.
+ Lisa Gaye graced six episodes of PM, but that's not enough for me: I put her on a pedestal as high as that of Julianna Margulies. Not a bad actress, either -- she convincing plays some nasty women. JohnK, 10 October 2015

It's for you, Mr. Mason: Paul reaches Perry by phone at Lola's and Conception's apartment. jfh 08Oct2018.

Quick Loan: Minutes after the charges were dropped and before the defendant left the courtroom, Paul said a bank was going to lend Jeff the money to develop his airplane. Preposterous! Submitted by H. Mason 11/10/14

This episode must set a record - it is a full half hour before Perry and company make an appearance. DanO 9/26/17
+ Apparently you caught a bad case of Syndicateditis: in (at least some) longer versions, Perry is actually in the very first scene. Diagnosed by Notcom, 011718.

While Lola and Bill are tussling with Lola holding the gun in her right hand, Bill twists her arm to the right with the gun pointing away from him and at the fireplace when the gun fires. I wonder why Lola thought that the bullet had hit him at such close range, with no evidence of him being shot. Also, looking at the crime scene photos later in court, or hearing testimony, did she realize that Bill's body had clearly changed position from where she left it on the carpet? Why would Jeff have changed the position of the body? Submitted by (lowercase, with a comma and period) masonite, 03/08/19.