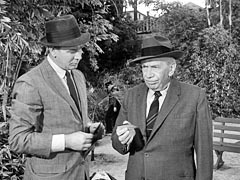 From The Perry Mason TV Show Book (Revised)
Eleanor Corbin pleads amnesia after police find her running and screaming through woods near her apartment building. Her loss of memory is of little help to her when she is charged with murdering a man whom she claims not only is her husband but also is working with her in breaking up a jewelry smuggling ring for the U.S. Treasury Department. Itĺs up to Perry to try to save her sanity and her freedom.

Anomaly: Coleen Gray, listed as Olga Jordan, is called Miss Corbin by Perry and Miss Olga Corbin by Paul. [Mitch English]
+ In the book, the ghostĺs half sister is Olga Corbin Jordan, i.e. Mrs. William Kensington Jordan. I guess that the credits were written before the final edit of the teleplay. Submitted by masonite, 21 Novemeber 2010.

Sightings: Quiet Old Man #1 sits in the back row of the courtroom gallery; we see him when Perry stands to raise an objection and when the camera cuts to Ethel Belan. At another time, when Perry rises to question Miss Granger, Little Old Lady #1 peeks over his shoulder (also from the back row). They are some of many recurring spectators that are fun to spot. Submitted by gracep, 12/16/2010.

+Distinguished Lady #2 appears as the prison matron, as she has done before, here most visibly when escorting Eleanor from the visiting room. Learning to spot these recurring faces is one of the most enjoyable gifts this fan site has given me! Submitted by JazzBaby, 3/8/2019.

The music heard under the opening scene in the park is lifted from Alfred Hitchcock's Psycho. Submitted by Kenmore, 1/16/2011.
+ That music was actually composed by Jerry Goldsmith for The Twilight Zone episode "The Invaders" (starring Agnes Moorehead, broadcast 1/27/61). The complete 12:57 track can be found on The Twilight Zone Original Television Scores Volume One LP (Varese Sarabande STV81171) and The Best of the Twilight Zone Original Television Scores Volume I (VCD47233). (Since "Psycho" was released by Universal, it is unlikely CBS would have been able to get the rights to the music even if they didn't already have a huge music library.) Submitted by Wiseguy70005, 6/17/12.

A well known, real-world financial services company gets a front row Product Placement for its travelers cheques on Walter Richey's front desk from 11:11 to 11:37. Added by Gary Woloski, 3/7/13.

+Thank you, Gary, for logging the Cattle Egrets with the cars. That gave me a chuckle -- and saved me having to do my own look-up. Sumnitted by catyron, 03/23/2018
++ The birds in question are actually two large white ducks. Their legs are way too short to be egrets, as are their bills, at least as far as I can tell about the beaks. OLEF641 4/14/21

Paul's Residence: In other stories, when part of Paul's home was shown (1,13,15,130), it wasn't clear if he lived in a house or apartment. In this episode it was said the police searched his apartment. Submitted by H. Mason 11/24/14

Raymond Burr gets a rest in this episode when Paul takes over for almost 15 minutes without Perry being seen (visiting Eleanor in the hospital, calling the doctor, visiting Eleanor's father, visiting Ethel Belan, visiting Suzanne Granger). In the novel Perry does these things or at least accompanies Paul and Della. Submitted by Wiseguy70005, 5/05/15.

In the episode we at least see Olga in the courtroom. In the novel she just disappears about halfway through, never to be referred to again. Submitted by Wiseguy70005, 5/05/15

+She not only appears in the courtroom scenes (where her squirming and eye shifting attracts our suspicion), she is present in the prison visiting room, where she pours yet more scorn and abuse on her sister. Submitted by JazzBaby, 3/8/2019.

This is the only PM appearance for Mary Murphy, who was briefly married to Dale Robertson...MikeM. 10/17/2016

This is the second of four PM appearances for Coleen Gray, who was once married to screenwriter/director Rod Amateau...MikeM. 1/23/2017

+ Once again the writers fall back on giving us an eavesdropping apartment/hotel manager who affects a persona I will call "fussy." But I suppose they had to give the actors portraying minor characters something to chew on. JohnK, 15 December 2021.

As is often the case, the summary veers from reality: Elanor is found wandering in a city park not "some woods"...hardly crucial, of course, but illustrative - yet again - of sloppiness ... Perry would not approve !! Notcom 033120.

Without spoiling it for any new viewers, something surprising happens to Della at the end that makes her more equal to Perry and Paul, and itĺs about time, too! Submitted by gracep, 12/16/2010.

When Burger is questioning Ethel Belan on the witness stand, Perry suddenly leaps up and says, "Objected to as argumentative, assuming a fact not in evidence, leading and suggestive, and utterly incompetent, irrelevant, and immaterial." Whew! That's got to be the longest objection ever. (By the way, the judge sustained Perry's objection.) Submitted by 65tosspowertrap, 10/18/2013.

I Wed 3 Wives would have been an apt title for the intrigues in this confusing episode. Submitted by Notcom, 011216.
>That title might lead some to think it involved Elmer Fudd.

Interesting that we never see or in any way become acquainted with the victim. I believe this has happened in a few episodes but I can't recall which. Any help? Submitted by WJones 7/8/16
> What are TCOT Duplicate Daughter, and - Midnight Howler. (I'll Take "Famous Pensions" for $500, Alex.) Answered by Notcom, 070816.

I must have missed something - just how were the gems being smuggled? And what was the significance of the short closet? And would the police really have left those suitcases in Della's apt? For the answer to these and other questions..... DODay 10/23/17

It doesn't matter how the gems were gotten into the country; the ended up in Belan's apartment. Thus their method of travel didn't matter to the plot. The reason Belan's apt had a short closet is probably because a service shaft (building plumbing or air return) took up the missing closet space. The diagram in court showed an access door, which allowed Belan to hide smuggled goods there. (Of course the guilty apt manager/ring leader knew about it; that's why it was rented to fellow conspirator Belan.) The police may or may not have seized the suitcases as evidence, but Della (and Paul) searched them as soon as they got them away from the building. When Della found the jewels in the face cream, Paul sent her to quickly put them in a hotel safe. Thus they were not in the luggage when the police caught up with it in Della's apt. Good or bad police procedure, it didn't affect the plot. HiTechHiTouch 2/17/18

+Your explanation is perfect, HiTechHiTouch. I was about to attempt to make the same points, but you said it better than I could have. Submitted by JazzBaby, 3/8/2019.

Oddly enough, the diagram entered into evidence in Court shows the plan of Suzanne Granger's and Ethel Belan's apartments to be absolutely identical - despite Mason's repeated references to a hidden storage space in a closet 3'6" shorter than usual. Probably it was some stock architectural plan that the producers used in preference to having a plan drawn that actually shows the discrepancy referred to by Mason. BTW, the most obvious reason for Walter Richey, the clerk/manager, to be in on the smuggling plan is because it would have been too risky to construct a hidden storage space containing a fortune in contraband without someone to cover up the renovations as they were being made, and to keep it from being discovered afterward. cspoleta 10/24/18
+ The floor plan matches apartments 208 and 210 as seen when Paul visits Belan and Granger. Kilo 4/11/2019.

TCOT Personal Preference Pow! We are back in real PM Land here, with an ESG novel as the basis; Perry, Della, and Paul working as a team; a complex and intriguing plot; lots of sex appeal; and fiery courtroom action. Given Della's prominent role and the fact that Tragg and George E. Stone appear, I wonder when this was shot, but I don't know where to find the shooting order data that some on here cite. I suspect it was made before some of the already aired shows that follow a later format, in which Della is marginalized, David Gideon takes over for Paul a lot of the time, and the plots become more routine. A matter of taste, I know! For me, this was pure Perry Mason at its best! Submitted by JazzBaby, 3/8/2019