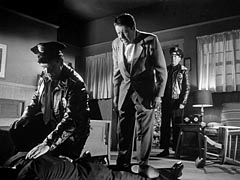 From The Perry Mason TV Show Book
Axel Norstaad, employer of a small Danish community of furniture craftsmen, is hoodwinked into selling their much respected trademark to Martin Somers on a promise that the profits will build a childrenÆs hospital.

When Axel learns that Somers is a con artist, heÆs enraged and wants to bash in the crookÆs skull. Although someone beats him to it, Axel is arrested for the murder anyway. To complicate matters, Axel is in love with Edie Morrow, whom he suspects of foul play in the matter.

ItÆs a tough one for Perry, but well worth the win.

When Edie Morrow takes the stand, sheÆs wearing a narrow brimmed hat. When the camera angle changes, so does her hat. The original hat reappears later in the scene only to change again shortly afterward. See all here. Submitted by daveb, date unknown.
+ IsnÆt that the same hat? I think itÆs elliptical, not circular. From the side it looks narrow. From front or back it looks wide. Submitted by alan_sings, 9/18/2010.

Character Names: MaigretÆs first initial is J, though we never learn what it stands for. The PolicemanÆs name is Lars (but unclear as to whether first or last). ōEdieö is a nickname for Edith Morrow. The motel managerÆs name is Mr. Swetson. Submitted by gracep, 12/15/2010.

Uncredited Actors: In the first scene, Bert Stevens appears as a craftsman listening to NorstaadÆs announcement. In the factory he reappears twiceŚonce behind Norstaad and once in front of Mason)Śeach time carrying a partially-made chair. Submitted by gracep, 12/15/2010.
+ Don Anderson plays the silent police officer in the background as the body is discovered. (HeÆs in the picture on this page.) Submitted by gracenote, 7/18/2011.

Sightings: That might be Distinguished Lady #1 in the courtroom gallery. The Pencil Mustache Man also peeks in, barely onscreen near the end of the hearing. Read more about these and other favorite frequent faces here. Submitted by gracep, 12/15/2010.
+ In the opening scene, Distinguished Gentleman #1 plays a workman listening with rapt attention to Norstaad. Sporting a cap, he is inconspicuous, as usual. Submitted by gracenote, 7/18/2011.
+ + And DG#1 is good old Rudy Salinger. Submitted by catyron, May 1st 2021.

Although credited, Lt. Tragg (Ray Collins) does not appear, leaving Lt. Anderson to do all the work. Submitted by gracep, 12/16/2010

When Perry meets a fellow attorney for a ōmeeting of the barö at a restaurant, the latter is partCurious Coffee Set. He offers Perry and Della some coffee with the set, too, but only Della indulges. A lady in the background may also be using it. Submitted by gracenote, 7/18/2011.

Goof: On the stand, Osa Massen (as Lisa Pederson) accidentally refers to NorstaadÆs Danish trademark as German. Submitted by gracenote, 7/18/2011.

Location: About 16 minutes in Axel's Danish Furniture factory is at 17001 Ventura Blvd in Encino CA 91316. If you Google map it you can see an excellent view. Della and Perry exit their car parked next to Encino Park and Della walks into 17001 Ventura Blvd. for some pastries while Perry continues on to Axel's at 17003 Ventura Blvd. which you can faintly see to the right of his head on a good DVD copy. On one shot you can also see Monty's steakhouse across the street. That was a Valley landmark until it burned down in 1988. Submitted by Eric Cooper 22 Dec 11.

Background Cars. When stopped at Encino Park, Della & Perry look toward the smorgasbord restaurant on the corner and see the police car (2) plus:

When Della & Perry get out of Perry's Lincoln and cross the street we see:

Car (3) was a fitting choice for Axel's thrifty, no-nonsense character; factory price of this baseline 4-door '62 Galaxie was $2507. The equivalent '62 Chevy Biscayne 4-door Sedan was $2378 while Edie's Buick convertible was $4366 before options. Maybe Ford felt that it had the $129 price differential with Chevy covered by its '62-Model-Year-intro of a new line of "Intermediate-Sized" cars called the Fairlane! 1962 Fairlane sedan/coupes ranged from $2154 to $2607. Added by Gary Woloski, 3/6/13.

This is the only PM writing credit for Oliver Crawford, who had been blacklisted for refusing to name suspected communists to the HUAC...MikeM. 10/14/2016

This is the first of four PM appearances for Lisa Davis, who appeared in a film in her native England when she was thirteen...MikeM. 1/20/2017

This was Osa Massen's final appearance on screen, after a 27-year career. Submitted by vgy7ujm on 18 June 2020

This is the third of four PM appearances for prolific television actor Dennis Patrick, who was born Dennis Patrick Harrison. Dennis Patrick was killed in a house fire in Hollywood in 2002, aged 84...MikeM. 10/20/2017

Sayģwhat happened to Stafford ReppÆs Irish brogue, heard when he played Chief OÆHara in the 1960s Batman? Could it have been affected just for the series?!? Submitted by gracep, 12/15/2010.

One of my favorite quotes from the series is when Axel tells Perry, ōDonÆt make your lawyer talk with me!ö Submitted by Masonite, 7/18/2011.

You're from where? You would think Karl Swenson, a Swede, could come up with a good Danish accent, but his effort in this episode is another example of awful foreign accents common to this series. Leaving aside for a moment his pronunciation of Copenhagen ("Copen-hay-gen," when any Dane would say "Copen-Hog-en"), Swenson's accent caroms from Denmark to Transylvania. Submitted by francis, 5/07/12.
>There seems to be some dispute. Perhaps the lovely Ms. Massen, an actual native of said city offered input (or maybe she covered her ears in protest). Notcom (soft "o"s all around) 032820.

I find Axel Norstaad to be one of Perry's least-likeable clients. Indeed, his behavior makes this episode almost unwatchable for me. Submitted by 65tosspowertrap, 10/17/2013.

As is often the case on PM, a plausible business situation is presented in such a way that it ends up making little sense. Sadly, the idea of milking a brand for quick-profits by substituting inferior quality is all too real; so Paul's statement that Somers planned to dupe wholesalers before they became the wiser makes (some) sense. What makes little sense is that the plot has him offering his product at rock-bottom prices, tipping off (at least one of) the wholesalers that something is wrong, and giving away the whole plan. Presumably this was done to expedite the action and get Axel involved, but it undermines the basic premise. Submitted by Notcom, 011116.

Funny how the court allows witnesses to testify from the gallery. In this episode it happens TWICE without objection from the attorneys or the judge. Submitted by WJones 7/8/16

The real crime is that dreadful wig and equally dreadful series of hats inflicted on the glorious Marie Windsor. Whoever was responsible deserves a one way ticket to the gas chamber! J. Maigret - a tribute, perhaps, to Simenon's Jules Maigret? DODay 10/17/17

For the second Consecutive story the first name of the killer wasn't mentioned. Anybody else annoyed by this? Submitted by H. Mason 11/19/14

As a Hogan's Heroes fan, I chuckled at the last scene for its general similarity to the ending of Karl Swenson's only appearance on that series, in the episode, "How to Win Friends and Influence Nazis". In that episode, Karl Swenson plays -- believe it or not -- Dr. Karl Svenson, a Swedish scientist recruited by the Nazis who defects to the Allies after Col. Hogan sets him up with the woman whom Svenson declares to be love of his life (after having been married four times) -- at the end, the couple hurriedly run off to wed. TriviaSleuth 8/12/19