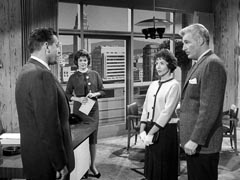 From The Perry Mason TV Show Book (Revised)
An attention-starved girl innocently leaks vital information about her father's business, Gregson Cannery Company, in letters to her pen pal. When the information gets into the wrong hands, the company's financial security is seriously threatened. Great Aunt Wilma, the head of the company, takes it upon herself to punish little Sandra severely for leaking the information.

Later, when Aunt Wilma is murdered, Sandra must testify privately in the judge's chambers. This little girl knows more than she wants to.

Starring Raymond Burr
in The Case of the POISON PEN-PAL
Based upon Characters Created by Erle Stanley Gardner
Barbara Hale as Della Street
William Hopper as Paul Drake
Ray Collins as Lt. Tragg

This is the only appearance on Perry by veteran movie actor John Litel, playing the judge. Among other roles, John Litel was the father, Carson Drew, of Nancy Drew in four Nancy Drew movies for Warner Brothers in the late 1930s. Submitted by PaulDrake 33, 8 August 2009.
+ John Litel was also Sam Aldritch, the father of "Hen-reeeeee, Henry Aldritch" in the 11 film adaptations of the Aldritch Family / Henry Aldritch franchise. Submitted by catyron, 03/26/2018.

This is also the only appearance on Perry by Everett Sloan, who plays the prosecuting attorney. He's best known for his role as Mr. Bernstein in Citizen Kane. Although his finest performance may have been in another Orson Welles film, The Lady from Shanghai. He certainly does a fine job in this episode of Perry. Submitted by Kenmore 1/15/11.
+ I agree. Everett Sloan makes the most out of his few mintues of screen time. A superb character actor. Submitted by catyron, 03/26/2018.

Although the only Perry appearances by these two performers, the rest of the primary cast must have felt like they were at homecoming - a remarkable 39 combined appearances! Douglas Henderson may be best known for his role in "Manchurian Candidate", and Paul Genge came to a memorably fiery end in "Bullitt". DOD 11/05/18

Sandra Gregson is called both "Sandra" and "Sondra" throughout the episode. jfh 24Oct2017.

Location: There is a fantastic establishing shot of the San Francsico International Airport with a nice, slow zoom. Unfortunately, we have no picture of this in our fine collection of other airports, but, with any luck, we may have one someday. Submitted by gracep, 12/17/2010.

Matt Clark uses a cup from the Curious Coffee Set in the coffee shop. More info here. Submitted by daveb, 12/30/10.

Uncredited Actors: Don Anderson appears in one of his familiar roles as a uniformed policeman. He’s the non-speaking member of the two-man team who confront Paul Drake when he is accused by Karen Ross (Pat Breslin) of stealing her young friend’s pen-pal letters. Submitted by FredK 28 Nov 2010.
+ While “Anderson” is only seen only at an angle from behind, it sure looks like him to me. Submitted by daveb, 12/17/10.

Sightings: Driving the cab taken by Perry and Miss Ross is the quiet (but interested) Blue-Collar Guy, decked out in a bowtie. Guess he takes jobs all over Californa. Submitted by gracep, 12/17/2010.
+ Only episode I recall with African-American couple in gallery. DODay 10/24/17
++ This may be the earliest sighting of African-American Man and African-American Woman in the gallery. When they appear together, as they almost always do, i note them as African-American Couple. Submitted by catyron May19th, 2018

Location, continued: As note by gracep, there is a fascinating shot of the San Francisco Airport. The large statue off to the left is the Peace statue by SF's most famous sculptor, Beniamino Bufano. Although the statue has been relocated to the shores of SF's Lake Merced, it was at the airport location for approximately 40 years. See a color shot of the statue, with the airport in the background, here. Submitted by Fifty-Niner, 7 April 2012.

Other Location Shots: The rear projection showing San Francisco scenes from the rear window while Perry and Karen Ross are riding in the cab were taken on the California Street hill. We can see a cable car, and the tracks in the background, as well as the side of the Fairmont Hotel. However, their conversation is so long, that the scenery begins to repeat itself. Submitted by Fifty-Niner, 7 April 2012.
+ I believe the shot(s) you're referring to is actually the old Metropolitan Life Building as it appears behind Karen, and hence to the left/South of the car. But whatever, the back-projection makes little sense: the Fairmont, of course, is at the top of Hob Hill, so in leaving it they would go down California Street, not up. Notcom 041521.

Recycled Newsprint. At 17:36 we see the front page of the San Francisco Tribune. Tucked beneath the Wilma Gregson article is an old standby, "American Mining Expert Asks British Citizenship - By The Associated Press - LONDON (Special)". This article really was news on July 18, 1933! See Trivia Ep#67. Added by Gary Woloski, 3/11/13.
+That paper was the second San Francisco newspaper seen in the series. In episode 102 TCOT Clumsy Clown a headline was shown on the front page of the San Francisco Dispatch and Douglas Henderson was in that story. Added by H. Mason 11/24/14

CARS. (1) Paul's NEW 1962 Thunderbird Convertible, top down, black. When the police appear at 13:09, Paul's car can be seen to be a 1962 TBird by the three decorative plates on each rear quarter panel. The '61 TBird had a stack of four horizontal darts.

Background Cars. The opening shot of the 1933 Bay Bridge, viewed from Treasure Island, dissolves into a street scene in which Car (a) motors from Left to Right and Car (b) is parked across the street at Screen Left:

This was the fourth of six episodes where the three main characters (defendant, victim, killer) were female. The first three were episodes 30,31,37. The last two are episodes 153 and 204. Submitted by H. Mason 9/26/14

Does anyone know the source of the quote Wright King says at the hospital? It begins "the years we waste and the tears we waste". Submitted by W. Jones 7/11/16

This is the only PM appearance for Chrystine Jordan, who appeared in three episodes of "My Three Sons"...MikeM. 1/24/2017

When Paul Drake is staking out the Thatcher house, he is sitting in his snazzy new convertible, with the top down, on the same side of the street as the Thatcher house, in full view of everyone, including Doris Thatcher and Karen Ross (true, it is dark). He even walks right past Doris Thatcher on his way up to Karen Ross' house! I'm no private detective, but this makes no sense (except as a plot device). And we see the trouble this gets Paul into. And how were the police able to sneak up on him like that? Very sloppy work on Paul's part. Submitted by 65tosspowertrap, 10/18/2013.

When testifying about Karen Ross's shoe as evidence, Inspector Wade states that there was blood "on the instep"; however, the shoe is a pump and, therefore, has no instep. jfh 18Oct2016.
+ In 2019, high-heel pumps are advertised as having an instep. If the corresponding part of a pump in your part of the world does not have an instep, then perhaps it has a different name or "instep" refers to an arch support. Per The Free Dictionary here, an instep is "1. The arched middle part of the human foot between the toes and the ankle. 2. The part of a shoe or stocking covering the instep....footwear shaped to fit the foot (below the ankle) with a flexible upper of leather or plastic and a sole and heel of heavier material" Submitted by (lowercase, with a comma and period) masonite, 03/20/19.
++ "Definition of instep
1 : the arched middle portion of the human foot in front of the ankle joint especially : its upper [emphasis added] surface. 2 : the part of a shoe or stocking that fits over the instep."[flogging this dead horse --- jfh 16Dec2021

Bad Lighting: At the airport, when Peter went to the phone booth, there were shadows on the background screen from people behind Ben Willoughby. Submitted by H. Mason 11/24/14

That entrance hall set with the elaborately carved staircase sure gets a workout; it's used for just about every 'grand house scene. That certainly is an elaborate court frock Sandra wears. For once Harry Jackson doesn't play a heel! DODay 10/24/17

Plot Twist we've seen it so many times: someone - almost invariably the principal guest character - has a tempestuous relationship with the (soon-to-be) victim, s/he storms to the latter's house for a confrontation, finds a body instead (conveniently bloodying a hand in the process) and ends up arrested. And that's what happened here...well, almost: so how did Peter manage to avoid being accused ?? Apparently the wheels of Justice in San Francisco turn - if not necessarily more logically - differently. Notcom, 041521.

I think this show is one of the best examples of a villain who is both unexpected yet perfectly logical. DOD 12/16/21