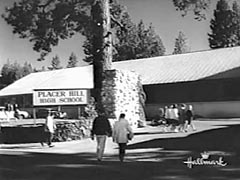 From The Perry Mason TV Show Book
This is one of the few Perry Mason episodes that doesn’t involve a murder trial per se. Perry is on vacation in Placer Hill, but any hopes of relaxing are quickly ended when he becomes involved in a local scandal.

A local teacher is the target of a whispering campaign. Her supposed romantic antics with some of her young male students cause quite a stir among the locals.

Perry takes up her cause and gets her a public hearing. But when a local innkeeper is killed, the situation takes a more ominous turn and all eyes are on the teacher.

The scene is not a courtroom, but a board meeting in a high school gym. The testimony revolves around the death of a student some months before. Perry’s client is involved because she took an interest in the boy before his death. 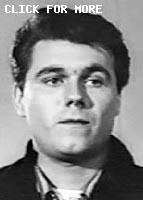 Anomaly: Edgar Buchanan is listed as Judge Edward Daley but the sign on his office window spells his name as Daily. [Mitch English]
+ Additionally, Mrs. Wardman addresses the Second Girl as Agnes, but she is not listed as such in the credits. Submitted by gracenote, 7/23/2011.

Thomas Lowell makes his first of two appearances on Perry here playing Bobby Slater. (His second was Episode #208, TCOT Careless Kidnapper, as David Pelham.) Thomas Lowell was born in 1941 with the birth name of Lowell Thomas. But of course once he became an actor, he would not use the same name as the famous newsman. Thomas Lowell had a minor career, his most famous role being Billy Nelson in the 60s action series Combat. Submitted by PaulDrake 33, 2 September 2009.
+ Thomas Lowell played Private Bobby Lembeck in The Manchurian Candidate (1962) jfh 03Dec2018

Uncredited Actors: The schoolboard meeting seems to have been shot in an actual school gym with the spectators seated in real school-type folding chairs. Among the townspeople, both Don Anderson and Lee Miller can be seen. It was rare for Anderson to appear in episodes outside of Los Angeles. By this time Miller should have been recognizable as Sgt. Brice, and his presence must have been somewhat jarring to regular viewers. Submitted by FredK, 3 Nov 2010.
I have seen every (or almost every episode) at least once, and am watching them again. I still don't recognize Miller or Anderson, even though they are mentioned here often. And I watch them several times a week. So maybe you are overestimating how many of the secondary cast members average people recognize and remember. And remember, these were only shown once a week, back in the day. I am starting to notice Miss Carmody once in a while, but usually I am paying attention to the main actors. --yelocab 25APR19
- It also appears that the Distinguished Gentleman #1 is present in the gym during the meeting. His back is to the camera, but his distinctive "toupee" is pretty apparent. Submitted by Kenmore 1/04/2012

There are too many fleetingly-seen background cars to list. At least four motorcycles, belonging to the local Toughies, await ID by a motorcycle enthusiast. Added by Gary Woloski, 6/29/13.

Although credited, Barbara Hale does not appear as Della Street in this episode, and neither does Ray Collins as Lt. Tragg. William Talman neither received credit nor appeared. Submitted by gracep, 1/15/2011.
+ LL was the 5th of Della's 11 absences. Barbara graduated from Rockford, IL HS in 1940 {IMDb]. Mike Bedard 3.18.15

Perry's Client: Perry did not have to defend Mrs. Wardman in a murder case. This was the third episode without court (episodes 6 and 14). Submitted by H. Mason 12/31/14
+While Perry did not defend his client against a murder charge, he did solve one death (probably manslaughter) and one murder.

The Gavel: Judge Daley used a gavel at the school board meeting. The first time a gavel was seen and used since episode 80. Submitted by H. Mason 12/31/14

Mr. Buchanan: For the second time actor Edgar Buchanan was in charge of the proceedings in a small town and Perry solved a murder (see episode 50). Submitted by H. Mason 12/31/14

This is the first of three PM appearances for Mona Freeman, who was also a portrait painter...MikeM. 11/15/2016

This is the third of three PM appearances for Kaye Elhardt, who appeared in eight episodes of "77 Sunset Strip"...MikeM. 2/21/2017

Hugh Pentecost is a pseudonym for writer Judson Pentecost Philips...MikeM. 3/13/2018

Location of Placer (Plasser / Place-Er) Hill? On first usage, the name of the fictitious town of Placer HIll is correctly pronounced Plasser Hill, as in Placerville (a real California town), but later pronounced Place-Er Hill (as in Win, Place, and Show). More to the point -- where was this episode filmed? And who got the bright idea that a town with a Gold Rush name like Placer Hill would be next to "Cactus County"? Submitted by catyron, 04/26.18
+ Actually, that's not all that improbable. Counties in California are fairly large (San Bernardino County is the largest by area in the lower 48) and most of the Gold Rush counties extend from the foothills to the crest of the Sierras. And, just over the Sierra from Gold Rush Country it's all desert. That's where Death Valley is, for example. ("It happened in the next county, near Cactus City . .") In reality, it's a bit far and a longish drive, and, except for Interstate 80, on very winding roads, but in the literal sense of the line of dialog, entirely possible. Of course, there is no "Cactus City" in California. OLEF641 5/13/21

Stunt Double: When Jane Wardman and her son Terry are being chased in their car by Pat Mangan and the motorcycle gang a zoom of the DVD reveals that the driver is a man in a wig. The boy looks like he could still be actor Mark Murray. Submitted by Kilo 8/5/2018.

Casual Perry/Perry In Pajamas Vacationing Perry spends the first half of the episode in casual slacks and shirt with a zippered jacket. After Jane's accident, at Perry's cabin, Perry appears to be attired in his pajama top under his smoking jacket. jfh 03Dec2018

Looking for Elvis ? Paul's fashion sense on display with that black shirt collar not only outside the plaid jacket, but most of the time raised in the back. Was he trying out to be part of the Memphis Mafia ? hojocola 13Jan2022

The closing credits state that this episode was based on the story “The Man with Half a Face” by Hugh Penetcost (a pen name for Judson Philips). The story appeared in the December 1958 issue of Ellery Queen’s Mystery Magazine. Are there other Perry episodes based on previous writings by other authors? Submitted by Ed Zoerner, 5/5/2009.

At over 40 minutes in, I believe this is about the latest into the story that we have our murder. DOD 12/29/20

This is a very brave episode, handling controversy and rather grown-up topics (teacher-student affairs, sexuality, underage drinking, corruption, vigilantism) rather deftly. Furthermore, Perry Mason shows himself not only a true gentleman but a fine moral example, such as when he scolds the doctor for his wishy-washy statements to the board. Submitted by gracep, 15 January 2011.

This episode is shocking in another way. At my high school, if any student had spoken to any of my teachers the way those boys spoke to Mrs. Wardman, he would have been suspended and probably expelled, never mind any lurid letters. Could kids in the 1960s get away with more? Submitted by gracenote, 7/23/2011.

He wasn't a delinquent like Pat Mangan, but there was a guy at my high school, in the early 1970's, who was, shall we say, "very worldly" and a bit of a discipline problem. But he was still his mother's "baby boy" and she made trouble with the school. Once she almost got a teacher fired over something completely innocent. Talk about rose colored glasses! OLEF641, 3/14/2018.

This was an excruciating episode for me. I do not remember any students back in my HS days getting away with such horrific behaviour--but it was painfully similar to my experiences 6 years ago, in my brief tenure as a HS Latin teacher. Despite my age (50's), I was subjected to sexual harassment, molestation, and threats of violence from the boys in my classes. Any time I reported their behavior, I was told it was my fault for "poor classroom management." If I disciplined them, the parents attacked me. This was a public school in a wealthy suburban county whose principal cared only about pleasing the parents. Two best situations: If the boy was African, I'd call his parents and he'd never give me any trouble again. Or, if he was an athlete, I'd call his coach, and, boom, done! I quit. This episode brought it all back! Submitted by JazzBaby, 3/25/2019.

TCOT (Not So) Juvenile Delinquent: John Durren, who played Pat Mangan, was 24 when this episode was filmed, and - more to the point - he looked like he was 24, which tends to dilute the shock value of the episode. (Of course one could argue he had been held back a number of times - at least six of them, to be exact - but then he would no longer be "underage".) Submitted by Notcom, 021016.
+Mrs. Wardman pointedly remarks that Mangan is hardly a boy, being old enough to be a soldier; how old would that have been in 1962?
+ Eighteen was the lowest age of enlistment, although i know one man who told me that he was a juvenile delinquent in the mid 1960s and his mother applied for and got a special dispensation from Senator Alan Cranston (of California) for him to volunteer for the Army at the age of seventeen rather than face criminal charges, but he was only sent into combat in Vietnam when he turned eighteen, i think. Just hearsay, but those were the days, eh? Submitted by catron, 04/26/18
++In addition, early in the episode, Mrs. Wardman asked why none of the students completed their assignnment, and one student replied that she should ask someone "older" like Pat Mangan.
+ I found Mangan's age a problem, too. How many times can a student be held back?!? He shouldn't have been in school with underage girls, in my opinion! Maybe they should have cast a more-age appropriate actor, say 19 or so. Submitted by JazzBaby, 3/25/2019.
+++ Pat Mangan is old enough to be in the army (probably 18 or more) but too young to buy liquor legally according to a plot point, so therefore, under 21. OLEF641 3/13/21

Vote Of Confidence After Pat Mangan attacks Paul on the Mangan front porch, Perry sarcastically calls Pat a "nice boy". Paul retorts, "Boy? You should feel the arms on that moose!", to which Perry replies, "You can take him." Great line! jfh 03Dec2018.

It's hard (for me, anyway) to say who is the lowest person in this episode ... but I'll put in a vote for the judge. You would think he'd insist on some real proof of the accusations, as well as knowing what undisciplined creeps the 'boys' are. But no, he just tells Jane to give up and move on...it was a pleasure to see Paul humiliate the biggest creep!! Submitted by MikeReese, 3/13/2018.
+ Agreed. Everyone in this episode--except Mrs. Wardman and son--were creepy and mean. I don't know why she would want to stay in that town. But the Judge was up there at the top too for being a jerk. (I thought the Principal was the nicest person...) --yelocab 25APR19