From The Perry Mason TV Show Book (Revised)
Professor Ronald Hewes suspects someone of trying to murder him. The stuffy, condescending English teacher is (secretly) the author of the salacious best-selling novel, L’Affaire Annabelle. Trouble is, he stole the idea for the book from a term paper written by one of his former students, who had killed herself two years before. The prof is getting pressure from the dead girl’s sister for a payoff. Hewes is also paranoid that his estranged wife Laura wants his money and that she might be trying to do him in. Hewes hires Perry to mediate the property settlement. When someone stabs the professor to death, Perry defends the accused-—Laura Hewes. 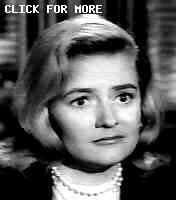 This would be the final of four appearances on Perry for Barbara Pepper playing Mrs. Williamson. Her first appearance was way back in 1957, TCOT Vagabond Vixen. Hard as it may be to believe now, Ms. Pepper began her career as a chorus girl for Ziegfeld Follies. She was a platinum blonde blue-eyed knockout until her husband’s accidental death in 1949. After that she took to the bottle and let herself go until she became the person you see in this episode (she was only 48 when this episode aired). Her final significant role would be as Doris Ziffel, the mother of a pig on the cornfield comedy Green Acres. She died at the age of 54 in 1969. Submitted by PaulDrake 33, 9 September 2009.
+ She was a good friend of fellow dancer Lucille Ball, who often put her in extras and bit parts in her I Love Lucy series. And Pepper did have a knack for comedy. Submitted by gracep, 11/24/2010.
++ She also played small roles in Lucille Ball's films, such as "Fuller Brush Girl." cgraul 1.8.13.
+ She also appeared in cameo on the Three Stooges short Three Smart Saps as Woman on Dance Floor (uncredited) HamBurger 07/16/2016

+++I will add that Barbara Pepper appeared in Hitchcock's 1940 Foreign Correspondent as Dorene, Robert Benchley's girlfriend. JohnK 20 May 2021

Location: Looking for Sally Sheldon about 27 minutes into the episode, we see a quick exterior shot of the Culver Hotel. This is a very famous hotel. Read more about it here and visit its website for the full story. Posted by Eric Cooper, 27 May 2010.
+ The Culver Hotel was also featured about 3 minutes into TCOT Romantic Rogue, episode #56. The hotel is also seen briefly 13:20 into the DVD of episode #128 TCOT Crying Comedian. Submitted by Eric Cooper, 4 January 2011.
+ The name on the large sign is actually "Hotel Culver City." Sumbitted by catyron, May 5th 2018

Euclid College: TCOT Brazen Bequest (#135, 5.12) and TCOT Prankish Professor (#168, 6.15) are both set at Euclid College. In fact, the opening sequence, showing the sign that says "Euclid College" and a man (probably a student) walking up the steps into a building behind the sign... is the *same* lead-in sequence used in *both* episodes! Submitted by Charles Richmond, 8/29/2012
+In episode 135 the school seemed to be out of the jurisdiction of the LAPD since the police work was handled by Sgt. Landro. That murder did happen away from campus and in this story Mr. Hewes was killed at his home which was walking distance from the campus. The school and town could be in different police territories and that would account for what seems like an inconsistency. Added by H. Mason 1/14/15
++ As an alumna of the school, I'm certain the opening establishing shot was taken at the front entrance of the Administration Building, aka "Ad Hill", of the University of Redlands. OLEF641 5/19/21

Sightings / Uncredited Actors: The only familiar face in the courtroom gallery today is that of Little Old Lady #1. However, early on we catch a glimpse of Bert Stevens as he exits the bookstore and nearly runs into Prof. Hewes in process! Submitted by gracep, 1/22/2011.
+ Little Old Lady #2 also appears in this episode, in a hat that makes her almost unrecognizable. Submitted by gracep, 1/25/2011.
+ Bert Stevens also reemerges at the Hotel Culver City. Wearing the same wide-brimmed hat as before, he walks (with an escort) behind Della. Submitted by gracenote, 7/24/2011.

“Only the names have been changed, to protect the innocent.” So says Sally Sheldon to the pretentious professor. The line entered the popular lexicon many years earlier in the radio and TV program Dragnet, which proclaimed in the opening theme that every story was true. Submitted by gracenote, 7/24/2011.

NO CAST CARS. Only Background Cars appear in this episode. Professor Hewes walks home right after Sally Sheldon asks him where he got "such a silly nickname". As he passes the front of his neighbour's house (Mrs. Williamson's) we see:

In the Location Shot outside the Culver City Hotel (see Eric Cooper's "Location" entry above):

From the Bottom Left Corner of Eric Cooper's (cropped) screenshot, going across the bottom edge to the Right are: a bit of the top of the white Caddy convertible, Car(d); roof of the old Chevy, Car(c); Car(f) and; Car(e). Car(g) is hidden behind the old Chevy. Added by Gary Woloski, 8/1/13.

Della's impersonation: Miss Street registered at a hotel as Sally Sheldon and left some items in the room to make it look like somebody was staying there. Submitted by H. Mason 1/14/15

Telephone Number: The number Hollywood 2-0799 to Ronald Hewe's house was used in episode 76 for Doris Petrie, in episode 99 for Lucy Stevens and in episode 107 for the Henderson house. That number has one digit different from Della's number given in episode 8 (Hollywood 2-1799). Submitted by H. Mason 1/14/15

Wacky Waistcoat: Once again the tattersall vest makes an appearance on a character of some sophistication. Did men really wear those things, or was it a Hollywood symbol of some sort? And did the costume people have several vests of different sizes, or was there just one with elastic in the back? JohnK, 23 October, 2015

This is the first of two PM appearances for Joyce Van Patten, who was not only a member of the well known acting family, but was also married for five years to Martin Balsam...MikeM. 11/22/2016
+ One of the members of that well-known family - her half-brother Timothy - by a small coincidence will direct (yet another) revival of Perry Mason this year...it liveth still! Notcom, 050620.

This is the second of two appearances for Kent Smith who also had major roles in movies The Spiral Staircase (1946), Magic Town (1947) , Nora Prentiss (1947), My Foolish Heart (1949) and The Fountainhead (1949), opposite female stars such as Dorothy McGuire, Jane Wyman, Ann Sheridan, Susan Hayward and Patricia Neal. jfh 28Feb2017
+ Let us not forget one of the most memorable of horror films, “Cat People”.
++ and, since you mentioned it, let us not forget The Curse Of The Cat People. Love me some Kent Smith! jfh Cinco de Mayo 2020.

This is the third of three PM appearances for Patricia Breslin, who had ties to Cleveland and Baltimore due to her marriage to NFL team owner Art Modell...MikeM. 2/28/2017

This is the second of two PM appearances for Jack Searl, who had some success as a child actor. After serving in the US Army during World War II, he had some movie roles in the late 1940s, but apparently stopped performing in the 1950s. In the 1960s he appeared on numerous television shows, but rarely more than once or twice on any series. He apparently stopped performing on television in 1969 and passed in 1991...MikeM. 3/20/2018

Grad Student?? Don Dubbins was 34 when this was filmed, and while it certainly isn't impossible for someone that age to be in college, it does seem to be pushing it (it should be noted that within a few years he would be cast in PM in a recurring role as an Asst DA). Presumably his boyish looks impressed the producers. Notcom, 032118.
+ During his testimony, he says he was a graduate student who had taken the class before — judgebob1, 01/09/2021

It's for you, Mr. Mason: as usual, everybody knows where Perry is ... Submited by catyron, May 5th, 2018
+ It's usually Paul or Della for the most part. ;-) Submitted by HamBurger Jul. 7, 2019
++ In the days before cell phones, it was customary for lawyers and businessmen to leave information with their secretaries about where they would be when out of the office during business hours, including the phone number if it wasn't a regular haunt, so they could be contacted if necessary or important. Paul could easily have gotten the number from Della. OLEF641 3/19/21

The Curious Coffee Set appears at the Metcalfes’ house. I hope they remember to return it to Della when they are finished with it.

In Perry's office when Laura is arrested, Della's shirtwaist dress is, IMHO, the worst-looking outfit she ever wore in the series. jfh 05Jan2021

The final confrontation and confession from the spectator gallery (as a bonus, we got TWO witnesses jumping up to testify from their seats ! ) was extremely long, with no 5th amendment admonishments from the judge (in fact, no comments at all). Usually, PM ignores the fact that many of its deaths were caused by self-defense. cgraul 1.8.13

In this case the killer claims that in addition to self defense, the victim was a sexual blackmailer, a sadist and a plagiarist. rackstrawe 3.5.17

One of the strongest contrasts between repulsive victim and sympathetic perpetrator. Has anyone kept count of the number of times Perry takes on the defense of the person he has just helped convict? DOD 01/06/21
+ Minor point: a confession isn't a conviction. jfh 05Jan2021

It seemed odd to me that Sgt. Brice invited Drake to go with him to investigate Sally Sheldon's room at the hotel and when he asked Drake if he knew her Drake replied no, he had never met the lady. Brice just heard him inquire about her to the desk clerk. Funny he didn't follow up. Submitted WJones 3/16/16.
This struck us as odd as well. Also, I do believe this is the most I’ve heard from Brice in any episode. DODay 11/23/17
+ I don't know about that. Paul is a private detective, he probably makes many inquiries and visits to people he has never met. He is visiting at Mason's request. -yelocab 27FEB18

"In Thomas Paine's COMMON SENSE, the same incident is related by a group of observers...Paine uses the obvious disparities...to make an Anti-Religious argument," Professor Hewes said in his lecture: Anti-Religious/Anti-Monarchist/Anti-Slavery Rebel TOM PAINE is an overlooked Patriot, but "Common Sense" was a major contribution to the Revolution [text available at www.let.rug.nl/usa/documents]. Mike Bedard 5.27.16.

Question (Self Defense): Esther said Ronald kept hitting her, but she was home with her husband, Perry and Laura right after the murder and seemed to show no signs of a fight - either physically or emotionally. Submitted by H. Mason 1/14/15
+ Yes, and at the end Mason rushes off to see about Esther's self-defense case, leaving her husband just awkwardly standing in his office with Della, Paul, and the newly-made lovebirds who are profiting from plagiarism! Submitted by catyron, May 5, 2018

Question (Plagiarism): Did Sally continue to pursue plagiarism charges. What she said on the witness stand seemed to show she could prove she wrote the book. Submitted by H. Mason 1/14/15
+ I would imagine she did. She would have gotten part of the royalties (since the book was based on a story by her sister, and expanded upon by the professor). I would assume they could have settled out of court.-yelocab 27FEB18
+ This is maddeningly left unexplained. Estridge, the literary agent all of a sudden wants to marry the plagiarist's widow and nobody speaks up for Sally, the actual author. I hope she gets a good lawyer, pronto because no out-of-court settlement should be accepted, since the plagiarism was based on outright physical theft of Sally's sister's term paper. Submitted by catyron, May 5, 2018

Question (Live Ammo and Blackmail): What happened to Ned for putting live ammo in the gun and blackmailing Dr. Metcalfe? Submitted by H. Mason 1/14/15
+ Another maddening loose end. Submitted by catyron, May 5, 2018

Testimony: Mrs. Williamson said she heard Professor Hewes say "Get out!" Why would that be the first thing he said to Esther if he was trying to extort money from her? Submitted by H. Mason 1/14/15