From The Perry Mason TV Show Book
Pat Kean is a levelheaded career woman who goes to see an astrological fortune teller for a lark—but the predictions begin to come true. For one thing, Max Armstead, her kindly but much older boss, proposes to her.

The mystic predicted Pat would “wear white, then widow’s black.” Pat marries Max, prediction or not. But things begin to work out badly. Max gets a letter saying that Pat is running around on him, even though she isn’t. Then Max’s heart condition gets more critical and he dies. But it wasn’t a heart attack. In full view of Perry and Lt. Drumm, Max says, “She poisoned me!” then collapses. He’s dead of an overdose of digitalis.

Burger gets an indictment against Pat for first-degree murder. Perry has to dig through the supernatural to solve the case. 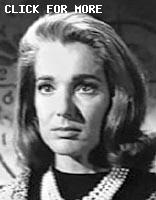 Uncredited Actors: Don Anderson appears in two, or possibly three, roles in this episode. Early on, he’s among the guests at the wedding of Pat and Max. The second possible appearance is at Pat’s office when she returns from her honeymoon. As Pat gets off the elevator, he appears to be a man getting on, but he’s seen from three-quarters behind making this only a possible. At the trial, Don’s among the spectators in the first row behind the prosecution table. Submitted by FredK, 1 January 2011.
+ Robert Wegner is sitting in the circular booth behind Paul Drake at a restaurant scene. Submitted by gracenote, 1/21/2013.

TCOT Curious Coffee Set: During Pat’s getaway in LaJolla, one cup of the Curious Coffee Set makes an appearance in her hotel room. Oh, the things that Coffee Set has seen! Submitted by FredK, 1 January 2011.
+ There appears to be a graphic print, perhaps an oriental-style branch, inside the rim of the coffee cup. I hadn't noticed it before. jfh 07Mar2017.
+ + I did not see a graphic print inside the cup, just some old stale coffee lines and perhaps a lipstick trace. The carafe next to the pretty china ware cup and saucer is part of the cheap, plastic West Bend Thermo Serv set. Submitted by catyron, July 18th, 2018

This episode just aired and I made sure to look carefully - there is indeed some floral pattern inside the cup. DOD 03/25/19

Sightings: Sitting in the courtroom gallery are a fidgety Pencil Mustache Man and a Quiet Old Man (#1)—the former clearest in cutaways to the fortune teller and the latter in cutaways to Ms. Fuller. Submitted by gracenote, 5/10/2011.
+ "Miss Carmody" appears briefly as a waitress who brings coffee to the patrons sitting behind Perry and Paul in a restaurant.

Ford Rainey appeared in 1 Ironside & 5 FBI episodes [IMDb]. He played the President of the United States twice in "Voyage to the Bottom of the Sea" & "Lost in Space." Mike Bedard 2.9.15.

There is a cinematic error (generally an cutting editor's faux pas) where the camera "crossed the line" - it flipped angles. It happened where Perry is cross examining Gordon Evans on the witness stand for the second time for the finale. Evans is looking left in the initial exchanges so the camera is on the right side of Perry then it switches to Perry's shot and the camera is now on the left side so the line of sight between Perry and Gordon was crossed. Submitted by Perry Baby 11/28/16.
+ I didn't see anything wrong. First Mason is standing to Gordon's left so Gordon is looking to his left at Mason. Then Perry moves across the witness stand to Gordon's right so in the next shot Gordon is looking to his right. Mason then walks to the defense table and Gordon looks more or less straight in front. Then Mason returns to Gordon's left and Gordon is looking to his left at Mason. Submitted by Wiseguy70005, 11/20/17.

This is the final of four PM appearances for Julie Adams (Patricia Kean), who would also appear in an episode of "Ironside"...MikeM. 3/7/2017

TCOT Exaggerated Elderliness According to IMDb, Jesse White was only 9 years older than Julie Adams, making the hullabaloo about the gap in their ages rather silly. Unless, of course, he lied about his birth year, as so many actors seem to do! Submitted by JazzBaby, 6/20/2019.

It is mentioned that Max is worth $5M, making that the second highest inheritable fortune on PM that I know of, after the $10M inheritance in TCOT Flighty Father. That $5M would be $42M in 2021 dollars. Rick P 1/2/22

Touch of cuteness: In the final scene, the fortune teller at the restaurant offers to read tea leaves for anyone interested. While everyone declines the offer, Perry looks at his palms and sheepishly offers them to the fortune teller. jfh 06Apr2020

While many PM episodes are often hard to follow, this one really eludes me. I could not for the life of me see what the motive of the two killers was since it was made very clear that the son was written out of the will, and his cohort also had nothing to gain from the death of the owner. It was an entertaining episode, but I saw no motive at all for the killers. Submitted by dickieC, Apr 24, 2013.

To me, this is one of the better plotted shows. Max not only wrote his son out of the will, but planned to leave his money to charity. Beth, seeing Max falling for Pat, contacts Gordon. They figure if they can get Pat to marry Max he would undoubtedly leave his money to her instead. Once Max dies, Gordon can swoop in, marry Pat and get the money after all. The fortune teller bit is just a little show biz. Unfortunately, after marrying Pat, Max refuses to die, and the embittered Buckley's plot to convince Max that Pat is unfaithful is a little too successful - Max might well divorce Pat before she can inherit, and Beth and Gordon's plan falls apart. Hence the poisoning which, if Max had died suddenly as hoped, would probably have been unsuspected. (And here we have our biggest plot hole; I can't see how either Gordon or Beth would have had the knowledge, means, and opportunity to change the digitalis).

Luckily for Gordon and Beth, Pat is accused of the murder. If convicted, she could not inherit and the estate quite likely would go to Gordon. The big questions; just what does Beth get out of all this? Did they plan for Pat to have an "accident"? Or would Beth be happy with a big payoff? Also, I can't help thinking the truth of Gordon's identity would lead to a lot of uncomfortable questions.

In a real rarity, we have scenes filmed in a real hotel lobby, not a set. Still, that ubiquitous stairway set makes yet another appearance. DOD 03/25/19

This may be a reflection of William Bast's unfamiliarity with the PM oeuvre. Although he had written for several shows, and would go on to scribe many more, this was is first foray into PM cases. (Incidentally, he was also James Dean's "boyfriend" at the time of Dean's death.) cgraul 5.6.14

I don't know if the episode actually made the points or not, but thinking back on it, I feel like the killers killed Max and framed Pat, knowing that Pat couldn't inherit Max's estate if convicted which would throw the will into probate. That's not really such an uncommon motive in murder mysteries. Submitted by DyNama, 2014.05.09.

I think it's inferred the son is unaware of the disinheritance, since much is made of the fact that he was in Brazil and had no contact for several years. Indeed, the provision of "leaving him a dollar" is to preclude him contesting the will if/when he should learn of its provisions. Submitted by Notcom, 060316.

What I find disturbing is Max' change of behavior: he becomes controlling and paranoid. He told her while courting that he knew she wasn't in love with him, and that was okay, but he didn't want her love, he wanted her obedience. Pat may not have known of this side of Max but the killers counted on it and fanned the flames. We were not told, however, why he thought she wanted to murder him--we don't know how much time elapsed but surely they were still in the honeymoon stage. Submitted by DyNama, 2014.05.09.
+ As Perry gets the doctor to testify to, digitalis in large doses can cause delusions. When Pat says she's never seen him act the crazy way he's acting, we can assume it's the poison at work. Submitted by JazzBaby, 6/20/2019.

Although post-trial get-togethers are de rigueur for the office staff - sometimes Burger and/or Tragg even show up - it isn't often that the defendant will join in for a full dinner...but why shouldn't Pat come along ??? Other than the fact that her best friend and her "Prince Charming" conspired to murder her husband (the latter's father) and she'll be stuck with a hefty legal bill, what's not to celebrate ??? Pondered by Notcom, 060316.