From The Perry Mason TV Show Book
Her business is good, her motto is “Eat sweet and thin,” but life is not all sweetness for the beautiful “Candy Queen,” Claire Armstrong. Mark Chester, Claire’s boyfriend, has stolen her inherited candy formula to pay back his gambling debts. [SPOILER] Her cousin Wanda helps frame Claire for murdering blackmailer Harry Arnold.

This sticky case is one of Perry’s favorites. This is the time where he investigates Claire's candy factory, nibbles for clues, and has the real murderer eating out of his hand in the courtroom.

And remember Paul trying to give Claire a box of candy at the airport to impress her?

Suggested Correction to Summary Paul gives Claire a box of candy shipboard, not "at the airport". jfh 08Mar2017. 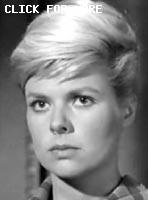 Starring Raymond Burr
in Erle Stanly Gardner’s The Case of THE CANDY QUEEN
based on The Case of The Silent Partner
Barbara Hale, William Hopper, William Talman

This episode of Perry Mason (TCOT Candy Queen) and the first season episode TCOT Silent Partner (#6, 1.6) are both based on the same Erle Stanley Gardner novel titled The Case of the Silent Partner. So this current episode is often considered to be a "re-make" of the first season episode TCOT Silent Partner. See repeated episodes here. Submitted by Charles Richmond, 26 April 2013.
+ Although “Candy Queen” has a more noir-ish quality, I found “Silent Partner” better scripted and easier to follow. DOD 04/07/20
++ Seems like this final season had a lot of repeats from mostly the first season. I guess the writing was on the wall that this would be the final one. Submitted by HamBurger, 7/18/2020
+++ Actually there are some substantial differences b/w the two: a major character - the slighted plant manger - is introduced, the motivation(s) of the murderer is(are) quite different, as is that of the murdered; what seem to have survived are the milieu of gambling, the gender of the main characters...and the defendant's fur coat. All of which is mentioned to point out a curious observation: given Garner's Story Wheel method of writing, some unrelated shows are actually closer to one another in storyline than the remakes. Notcom 090321.

Uncredited Actors: Once more Don Anderson appears as a plainclothes policeman. Though he has no lines, he's right behind William Boyett in the raid on the gambling house. Don and two uniformed men actually apprehend the Candy Queen fleeing from the murder room. Submitted by FredK, 11 January 2011.
+ It’s difficult to miss Arthur Tovey, King of Extras, sitting behind William Anderson in the courtroom gallery. He’s the lean, placid elderly gentleman next to H.M. Wynant. (We don’t have him on our Uncredited Actors page yet, but perhaps soon…) Submitted by gracenote, 5/11/2011.
+The dark haired young brunette was in the courtroom again on the first row on prosecutor's side second from the left end. In this episode, the gallery did not change seating positions between days. Perry Baby 12/8/13

Irony: Patricia Smith played Wanda Buren in this episode. “TCOT Candy Queen” was the *only* Perry Mason episode she appeared in. The irony is: Patricia Smith was a diabetic. She battled diabetes for 65 years until her death of a weakened heart in 2011. Submitted by Charles Richmond, 8 March 2011.

Stalled in his Hollywood career, Kenneth MacDonald wrote a pamphlet entitled "THE CASE OF KENNETH MACDONALD" and "distributed it to as many producers as he could. The ploy worked; he started getting jobs at most of the studios...He is probably best remembered as a foil for many of Columbia's comedy teams...particularly The 3 Stooges [IMDb]." That website states that he presided in 32 PM episodes (11.8%) from #2/"Sleepwalker's Niece" to 271/"Final Fade-Out." Mike Bedard 2.10.15.

Elusive Entry: Concealed in back of the Royal Beach FINE FOODS restaurant is a good-sized casino floor, bustling with gung ho gamblers. But to gain entry, even the manager has to sneak in through a janitor's closet and pull a secret lever. How did all those patrons get in there? And where would they have parked their cars unnoticed? Maybe they came in buses to an underground garage. JohnK, 15 November 2015

This is the second of two PM appearances for Nina Shipman (Carol Olin), who has a music degree from Cal State University, Los Angeles...MikeM. 3/8/2017

Perry must have anticipated a short day in court. He parked in a 2 hour parking zone in front of the courthouse. Submitted by Kilo 1/19/2018.

This is the fifth of five PM appearances for John Archer (Harry Arnold), who also appeared twice on "Ironside"...MikeM. 3/14/2018

This is the fifth of five PM appearances for Robert Rockwell (Ed Purvis), whose career on stage, radio, screen and television spanned half a century. Typecast by his iconic role as Eve Arden's Mr. Boynton on the "Our Miss Brooks" television series, Rockwell managed to transition to other roles on stage, screen and television. When Robert Rockwell passed away at his Malibu home in 2003, he was survived by his wife, to whom he had been married since 1942, and by their five children...MikeM. 7/18/2018
+ I loved Robert Rockwell in "Our Miss Brooks" and have always been pleased to see him appear in episodes of Perry Mason. Submitted by catyron, July 19th, 2018

Location: Carol Olin's charm school is located on the 8th floor of the 11-story 6399 Wilshire Blvd building. (We have seen this building before.) However, when Carol calls Paul into her office, we see through the window a street level view of a one-story wooden Queen Anne cottage backed by some residential shade trees! This screen view appears through a different window in Episode 256, TCOT Bogus Buccaneers. Submitted by catyron, July 19th, 2018
+ We've given nicknames to many of the background characters, should we do the same for the sets as well ?? If so, I'd like to suggest this one be labelled the "Candy Queen Anne Cottage". Advocated by Notcom, 080218.

In the final Bon Voyage scene, Della is wearing a fur stole! I choose to believe it was a gift from Perry! Lili-Beth, 2.7.20

This episode is essentially a remake of episode #6 (TCOT Silent Partner). It changes some of the details (candy business instead of orchid business, etc.), but the major plot points are all the same. I prefer #6, myself. Submitted by Ed Zoerner, 8/29/09.

The jailhouse scene with Perry and Claire is interesting - not a single shot showing them both. I wonder if, for efficiency, they were shot separately then later combined. DOD 04/26/21

This is one of the few episodes from the last several seasons that occasionally recaptures some of the noirish undertones that were largely lost near the end of the show's run. For example, the scenes outside Harry Arnold's gambling joint and Wanda Buren's apartment harken back to the first several seasons' somewhat grittier, noirish Los Angeles, depicted even more effectively in Episode 6 ("TCOT Silent Partner"), mentioned above by Ed Zoerner. Submitted by BobH, 14 July 2016.

After watching this episode, I finally decided that Paul Drake is much a more interesting character than Perry Mason. Mason gets the job done by legal razzle-dazzle or by browbeating the guilty into confessing; but Drake negotiates with potential witnesses, showing them how it's in their interest to tell the truth. And he never, ever, takes anyone's first offer. BTW, Erle Stanley Gardner must have had a weakness for private investigators: he wrote 20 novels about another detective: disgraced former lawyer Donald Lam. Submitted by B. Cool 7/18/18
+ I have long agreed with B. Cool that Paul Drake has much more range than Perry Mason, whose expression ranges from A to B. Most of this can be laid at the feet of the scriptwriters, and of Gardner, and is appropriate to the character. But I'm afraid some can be traced to Burr himself. If you look at the parts he played, they are all pretty much along the same lines as Mason: fairly serious, somewhat humorless. And, I'm sorry to say, some of this may be due to Burr himself. He appeared on Match Game '76 as a panelist, to promote his new show, Kingston: Confidential. It is painful to watch how out of his depth he is trying to be humorous. Don't get me wrong, Burr is a fine actor in parts that suited his style, and Gardner was right to choose him to play Perry -- but he never could have done justice to the part of Paul Drake. William Hopper's talent was underappreciated in his day, largely, I think, because it came so easy for him. OLEF641 9/3/21
>> I'm going to serve as amicus theatralis here and rebut both of these opinions: altho I certainly agree Raymond Burr was no Dick Van Dyke, I thought he was fairly good at humorous delivery in the show's early years (remember his facetious remarks to Yvonne Craig in Lazy Lover, or his frequented lighthearted banter with Tragg); and recall, too, how often Perry would resort to intrigues to help his clients (think of his coy negotiations in Sleepwalker's Niece). What changed over time was three things: (1) Raymond Burr's weight (2) Perry's LAPD adversaries (3) the tone of the writing (which slowly became ever more cliched, humorless... even sanctimonious). In short, the elements of the show became heavier over time, both figurative and literally. Oh!! but those first few years... Notcom 090321.
+I largely agree--pun partially intended--with Notcom. It's very difficult to be funny when your adversary is the dull Lieutenant Anderson or the taciturn Steve Drumm rather than the droll Arthur Tragg. But Ray could be funny when asked. The best example is his take-off on his PM character in the "Jack On Trial for Murder" skit on the Jack Benny TV Show. Submitted by BobH, 3 September 2021.

Employees at the candy factory are careful to wear hairnets, but handle the candy with bare hands. The Brent Building is an architectural oddity - balconies from the inside, but none on the outside. Can't say I care for H.M. Wynant's attempt at "tough guy" talk. He and Walter Burke have the distinction, of having played victims, suspects, and prosecutors over the years. DOD 3/16/18
+ Actually, well-washed hands were the instrument of choice in those days. People weren't so paranoid about germs, there weren't so many "superbugs", and I'm pretty sure that the skintight gloves that are so ubiquitous today had not yet been invented. I kinda sorta remember that doctors used bare hands as well until recently, but don't quote me on that one. OLEF641 5/29/21

Funny reaction (IMHO of course <grin>): Paul is calling “the poisoning” into the police and he seriously/somberly says that she is in real bad shape, then suddenly gets very happy (and smiles big) as he thinks he recognizes the voice on the other end, and says “Is that you Steve?”! LOL! Submitted by mesave31, 02/16/15.

The first police car out of the police station parking garage came out without his headlights on. The two police cars that arrive at Wanda’s are different than the two that left the garage. Kilo 1/21/2021.