From The Perry Mason TV Show Book
Sergeant Dave Wolfe warned Joe Oliver to stay away from his sister Susan. Now Susan’s been beaten up in Joe’s apartment, Joe’s been shot to death, and Dave is going to jail for the murder.

Dave swears someone knocked him out and used his gun on Oliver. Perry comes to his defense and soon learns that there were six other people in the building at the time of the attack on Susan. Not one of them tried to help her. Perry also learns that Joe Oliver was not the man who beat up Susan Wolfe. If Dave really did kill Joe, he killed the wrong man. 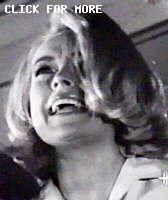 Chris Noel makes her only Perry appearance here playing Susan Wolfe. As hard as it may be to believe, the beautiful, sexy, Chris Noel was a DJ for Armed Forces Radio in Vietnam during my tour there in 1969. She had a daily show called A Date With Chris. The war pretty much ruined her life as it ruined so many lives. Submitted by PaulDrake 33, 16 October 2009.

This episode was broadcast in Chicago on 23 March 2010. It is obiviously based on the real-life Kitty Genovese murder, which occurred in March 1964, a year-and-a-half before the original broadcast date. She was chased and attacked three times over a period of about 35 minutes before finally succumbing. It was determined that at least 38 people “witnessed” the attacks, but none came to her aid or even called the police. This case raised a national outcry over public apathy, but, of course, the explanation is a bit more complicated. A good account is given in Influence, the Psychology of Persuasion by Robert B. Cialdini. Submitted by Prof. Lindley, 24 March 2010.
+ Yes, certainly, there is more to that tragic event than what was reported at the time in the newspapers 49 years ago. Kitty Genovese, for one source, has an account that mentions only two attacks on her, starting at about 03:15 AM and finishing in the rear of a building about 20 minutes later. Per this account of the tragedy, the “witnesses”, closer in number to 3 than to 38, had some trouble interpreting what was happening down in the street, though at least 2 people called the police (this was before 911 and cell phones). Submitted by (lowercase, with a comma and period) masonite, 07/07/13.
++ For those interested in the actual Kitty Genovese case, I would highly recommend the 2015 documentary "The Witness". Much of what we know about the case is false. Bob61571, 3/26/2018

Cyril Delevanti played Craig Jefferson in this episode, “TCOT Silent Six.” The only other Perry Mason episode in which he appeared is #252, “TCOT Silent Partner”, which was broadcast as the sixth episode of the series. And both the episode titles had the word “silent” in them. Submitted by Charles Richmond, 31 January 2011.
+ Mr. Delavanti also played, among many other roles, "Nonno" in Night Of The Iguana alongside Richard Burton, Deborah Kerr, and Ava Gardner. jfh 19Aug2019.

Anomaly: The credits list Tyler MacDuff as “Herb Jackson,” but Perry clearly addresses the harried, bespectacled man in his office as “Herm.” Submitted by gracenote, 5/21/2011.
+ Herb says their client suffered "psychic damage". Psychic? Really? jfh 19Aug2019.
++ Add to that list of question marks the show's equating goofballs with "hopped up": today the slangtionary tells us goofball=barbiturate, i.e. a depressant, so that would seem to be the opposite of what would be expected; but perhaps the terminology is a bit imprecise....I mean we can't imagine the writers not being experts on beat culture...can we?? Notcom 091521.

This episode has a very unusual trial, in that it uses a jury (to whom Perry gives an opening statement). Very shortly after the series began, juries were generally absent to save production costs and remain consistent with the books, which resolved generally in preliminary hearings. cgraul 1.2.11

Instant Photos! On Perry's instruction, Paul pokes around the apartment complex taking instant photos of the views from various spots with a Polaroid Land Camera. I believe it's the same model I had, the Model 103, introduced 1965 and retailing for $89.95. Read more about that era's Instant Cameras here. The camera was big and clunky, as were the film packs, each shot having its own self-contained photo lab. Paul's photos turn out to be key to Perry solving the case! Submitted by Gary Woloski, 23 Dec 2011.

My parents bought one of these cameras when they first came out - a major splurge, the equivalent of about $700. today. The developing photos had a very distinctive odor I can smell even now. DOD 04/17/20

Uncredited Actors: Don Anderson appears twice in this episode. First he’s one of two uniformed officers escorting Sgt. Dave Wolfe (Skip Homeier) into police headquarters after the fatal shooting. When a reporter infuriates Wolfe with an indelicate question about his sister, Anderson helps Lt. Drumm (Richard Anderson) restrain him. Later, Anderson, wearing dark-rimmed glasses, appears in the first row of the courtroom gallery behind the prosecution table. For some reason in this episode, the prosecution sits to the judge’s right and the defense to the left instead of the usual arrangement used in the series. Submitted by FredK, December 16, 2010.
+ It appears that Anderson is also among the patrons seated at the bar in Clay's Grill in the tag scene. Submitted by FredK, 21 April 2012.

This is the third of four PM writing credits for William Bast, who also had a credit for an episode of "The New Perry Mason" television series in 1974...MikeM. 3/20/2017

Interesting that the police did not used the GSR test (gun shot residue - parafin test) on one of their own to show that he didn't shoot the gun. Submitted by HamBurger, 06/17/2017
+ Agreed--this troubled me through the whole show. How could anyone be accused of firing that gun 6 times when he didn't have a trace of GSR on his hand and arm? ckb 10/8/20

This is the final of David Macklin's 4 PM appearances (and arguably one of the high points of his career, as he seems to have specialized in more low key characters). He also died this past April....such are the ravages of time that even those who played veritable kids in the later seasons are leaving us. Lamented by Notcom, 070117.

Cyril Delevanti (Craig Jefferson) must be one of the "earliest-born" persons to appear in a PM episode. IMDb shows Delevanti as being born in London, England, on 23 February 1887. Wikipedia gives the year as 1889. Both agree he passed in Hollywood on 13 December 1975...MikeM. 3/26/2018

This is the final of four PM appearances for Dianne Foster (Linda Blakely), who was born in Canada in 1928. In 1966, Foster stopped appearing in films and on television in order to devote more time to her children. Dianne Foster, age 89, is reportedly still living in California...MikeM. 7/30/2018

Hats off to stuntman extraordinaire Dale Van Sickle, who was 58 years old when this episode was filmed and could still do the amazing backwards-over-the-balcony fall he had perfected in a hundred Westerns and crime dramas decades ago! What a great stunt. Whenever i see it on an old film or TV show i play it back over and over, just to check out how gracefully he choreographs it. Submitted by catyron, November 5th, 2021.

Music: During the murder in the opening scene, does anyone know the piano music that was playing on the phonograph? It sounds kind of like a Beethoven sonata, and I gather that the producers of Perry Mason were fond of using Beethoven, but I cannot quite place that particular piece. Submitted by gracenote, 5/20/2011.
+ The stormy piano piece heard under the opening scene is the Etude in C minor, Opus 10 No. 12 by Chopin, the so-called Revolutionary Etude. It was written in 1831 during the unsuccessful revolt of Poland from Russia, and is also sometimes called Etude on the Bombardment of Warsaw. Chopin may have used Beethoven's last piano sonata (in C minor) as a model for certain aspects of the piece, especially the end. Submitted by FredK 30Jan12.

Who would arrange candle holders on the mantel side by side rather than on opposite ends of the mantel like in one apartment scene. The one with three looked even worse. Submitted by Perry Baby 1/11/17.
+ Maybe they were arranged by someone hopped up on goofballs!
++ I don't know, I kind of like the subtly asymmetrical arrangement over Mrs. Oliver's fireplace OLEF641 9/15/21

This happens to be me, in my opinion, one of the most exciting openings I have seen in this series. Submitted by gracenote, 5/20/2011.

Did anyone else notice that the sister and the landlord who-would-be-her-boyfriend were more than three decades apart in age? Chris Noel was born in 1941, and Dale Van Sickle in 1907! Submitted by gracenote, 5/20/2011.

Hampton Fancher, who played Hamp Fisher in this episode, came the closest to playing himself (without actually playing himself) of any actor in the series. Submitted by PaulDrake 33. 23 February 2015.
+ And the perfect Pitkin Principle name! See episode 18 trivia. Submitted by Kilo 1/29/2018.
++ I assumed that (Lionel) Hampton, (Thelonius) Monk, Coleman (Hawkins), and Joe (King) Oliver were all intended as jazz references, since those guys were cool cats with their goofballs and their hep lingo. Submitted by Vladimir Estragon, 8/12/20.

I loved the way Raymond Burr questioned one of the witnesses about who he saw out of the "rear window." In 1954, Raymond Burr played Lars Thorwald, a man who was seen out of the rear window by James Stewart in Alfred Hitchcock's classic film "Rear Window." Photography equipment played an important part in that movie, as here. There was a musician in the apartment in "Rear Window" as well as here. In the movie there was someone confined to a wheelchair, and, of course a screaming woman, and a man who shouted, "You don't know the meaning of the word 'neighbors'! Neighbors like each other, speak to each other, care if anybody lives or dies! But none of you do!" And, finally, someone falls to the floor below in both the movie and this episode. I sense that the screen writer was having some fun rearranging these parallels. Submitted by catyron, July 26th, 2018.

At approximately 4:00 on the DVD there is a somewhat awkward attempt to make the office look extremely busy with multiple cases, as if the scene had been specifically written and staged to counter the criticism that Perry in most episodes seems to be working on only one case at a time. Submitted by Dan K, 3 August 2018.

Old Dog Writers perhaps hoping to atone for having marginalized domestic violence over the previous eight seasons, the writers crafted a decent show (I'll skip the cliched "powerful" since the usual formulaic excesses really preclude that term). But when it comes time to wrap things up, apparently they can't help but fall back on bad habits: as Dave and Susan depart for Hawaii - we know it must be at least a couple months later since we'd been told Susan would be in the hospital that long - Della chides Paul for recklessness:
Paul: "Perry, what would I get for inflicting mayhem on a backseat driver?"
Perry (smiling): "Don't worry, no jury would convict you."
They all laugh; we don't.
Notcom 090120.
+ The time elapsed between crime and trial would have been at least the two-month period mentioned, if not longer. And I, for one, don't find the good-natured joshing in the final scene disturbing. Yes, actual violence never solves anything, but there is a clear difference when it's just good friends kidding around. OLEF641 9/15/21