From The Perry Mason TV Show Book
Pappy Ryan, a race car builder, is one of the meanest men you’d ever want to meet. He’s angry enough to kill when one of the race car drivers, Pete Griston, cracks up one of Pappy’s masterpieces on a test drive and injures another driver.

Pappy accuses Harvey Rettig of tampering with the car, and files charges against both Rettig and Griston. Before the authorities can serve a warrant, Rettig is killed and Pete Griston is found standing groggily over the body. Burger has all the motive he needs when he learns Pete signed for a $50,000 loan that Rettig took out with a loan shark. 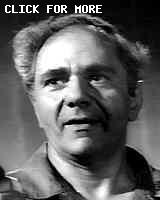 Continuity Error: At the end of the show, Paul gets into a right-hand drive foreign car and is taken for a ride. Look close! The car on the track is not the same one he got into! It’s a modified Corvette. That same straightaway run is also seen when Perry goes for his ride about midway through the show. See more here. Submitted by Julie Corson, 2/21/2005.
+ Another continuity error is made in the very first scene, where Marge Leonard, in a rear-angle shot, removes her sunglasses upon being introduced to Perry and then, in a frontal close-up, again removes her already-removed sunglasses. Submitted by BobH, 1 July 2017.
++ Another minor continuity error occurs at the beginning when Perry is entering the race track. A closeup of Perry shows him nodding to the attendant to his left. But in the wide shot the attendant is actually on the right side of his car. Submitted by Kilo 1/28/2018.

This seems to be an unusual case in that while Ham Burger appears, there is no courtroom scene in the episode (any others?). It is not clear to me how “official” the racetrack meeting at the end is; Pete Griston is there in handcuffs, while Burger had to ask to attend the proceedings.

The character of Harvey Rettig, played by Anthony Caruso, may have been inspired by real-life team owner and race promoter J. C. Agajanian. See here. Submitted by D. A. Supernaw, 9/29/2005.

Location: Towards midway, Perry and Paul drive up to Olivers Stone’s estate in Paul’s Corvette. The house is actually “The Magic Castle” in Hollywood. See here. Submitted by D. A Supernaw, 10/28/2005.
+ Listen for this odd exchange when Perry and Paul visit Oliver Stone at his estate. Paul: “Now Professor, will you tell the audience what’s written inside the lady’s watchband?” Perry: “One dollar, forty-nine.” Paul: “Right you are, Professor.” This sounds like the dialog from a lame clairvoyant act. Look here for the connection. Submitted by D. A. Supernaw, 10/28/2005.

Goof: At the hospital, Ms. Leonard says, “All I know is that Mike is upstairs in some room with people trying to mend his burned body.” Her husband’s name, however, is Blake, but the actor playing him is Michael Harris. Submitted by gracenote, 5/18/2011.
+ Yours is a plausible interpretation. The line is at about 06:30 on the 2013 Region 1 Paramount DVD. I hear closer to "Blake" than "Mike", and Jan Shepard repeats "Blake" other times in the scene. I also wonder if she and the other actor, Hank Brandt, are glancing at an off-camera teleprompter. Both do play the scene well, IMHO. Submitted by (lowercase, with a comma and period) masonite, 07/07/13.
++ FWIW, I was watching a copy of this from Hallmark Movie & Mysteries and the closed caption showed "Mike". Submitted by mesave31, 03/14/15.

Goof (sort of <grin>): With all the closeups of folks when driving in their race cars, you never see anything even slightly move from the high wind speed. LOL, check out when Perry is riding w/Pappy Ryan, his long helmet strap just gently hangs there during their entire ride. ;-> Submitted by mesave31, 03/14/15.

How times have changed: Perry slips into the competition modified Corvette passenger seat rather deftly and dons goggles and helmet, but no lap belt? SCCA rules required a lap belt from 1954,(in competition). Submitted by JoeB, 04/04/19.

Goof: While putting on his helmet in the final scene, Pete sees Paul seated in the racecar. Pete quips, " I didn't know I was going to have a passenger on my first drive!". Della responds, "Guest? He'll probably try to drive!"
+ On my DVD copy she says "Company?..." Submitted by Wiseguy70005, 11/07/17.

Sightings: If you look carefully, you can discern the Pencil Mustache Man chatting with a group of friends at a table behind Mason, Drake, Burger, and Drumm at Clay’s Grill (or someplace similar). Submitted by gracenote, 5/18/2011.
+ It also looks like Don Anderson at the table as well sitting to the right of Pencil Mustache man. Perry Baby 12/23/13

According to "the interwebz," this is Paul Winfield's first appearance on either the big or small screen. Submitted by 65tosspowertrap, 2/18/14.

This is the fourth of four PM appearances for Jan Shepard (Marge Leonard), who married actor/production designer Ray Boyle...MikeM. 3/17/2017

It's interesting that Pappy's car (driven by Pete) has a license plate: Idaho 65, 8B20355, Famous Potatoes. Normally race cars don't have license plates since they're never driven on the street. Also the car seen in the closeup of Pete is not the same car seen in the wide shots. Submitted by Kilo 1/28/2018.

This is the last of four PM appearances for Michael Harris (Blake Leonard), who also appeared in one episode of "Ironside"...MikeM. 3/23/2018

Location: The racetrack is the Paramount Ranch Raceway, known for its unusual overpass. The course was located high in the Santa Monica Mountains, north of Malibu, south of the San Fernando Valley, and the ranch was also used for the filming of Westerns. See old photos here and here, and modern photos plus a track map here. The raceway was officially closed in 1957, after a fatal accident, and if you look closely during the race scenes, you will see that the road surface was already beginning to deteriorate in some sections by 1965. Submitted by catyron, July 26th, 2018

Although he is listed in the credits, Dan Tobin as Terrance Clay does not appear. Submitted by gracenote, 5/18/2011.
+You must have watched an edited episode. He appears in the scene with Burger and Drumm making cracks about the clam chowder with Drumm right as Perry joins them. Submitted by Wiseguy70005, 11/07/17.

At the very end Blake Leonard shows no sign of having been in a fiery car crash. Pete Griston is in Rettig's office no more than ten seconds before the two mechanics come rushing in - surely not enough time to commit the crime as described by Drum. When Perry joins Pappy for a drive, it is obvious there is no glass in their goggles. A cup from the Curious Coffee Set appears in the diner scene. DOD 3/23/18

The stock footage of the crash shows the car smashing into a wall with a grandstand in the background, neither of which appear in the rest of the scene. DOD 05/17/22

TCOT Crazy Chapeaux: Loyal viewers are punished with some silly wardrobe in this episode. The bad guy Harvey Rettig (Anthony Caruso) is sporting a junior Stetson, maybe from a kid's birthday party, and which he doesn't remove indoors. (Pardon my stereotype, but Caruso seems better suited to some sort of mob boss just in from Chicago, as in #156 TCOT Playboy Pugilist.) Then there is Gavin MacLeod, playing a goofy journalist, topped off by an out-of-place Swiss-looking lid, which argues with his ill-fitting suit and bow tie. What were the producers thinking at this point? JohnK, 16 February 2018
+ "Bravo, Caruso." Sorry I have to disagree with you on this one, JK, at least regarding Anthony Caruso. He certainly played his share of "mob boss"-type roles in the course of a long and prolific career, but his acting credits reveal that even given his tough guy mug, he was quite versatile and played a wide variety of primarily character parts. And, in my opinion, he's much more believable as the scurvy non-mob boss Harvey Rettig than are Michael Constantine--an otherwise fine actor--as hot-headed Irishman Pappy Ryan or Gavin MacLeod's "goofy" gum chewing reporter Dan Platte. (See my additional comments below.) Respectfully submitted by BobH, 8 April 2019.
++ Talking about stereotypes: I remember a humorous TV commercial from perhaps the 1970s in which familiar movie and TV heavies Bruce Gordon, Richard Devon, Anthony Caruso, Elisha Cook--all also PM guest cast members (and heavies)--and Harold (Oddjob) Sakata were hawking some make of car. I don't think it lasted very long, but I wish it were still available on YouTube. Submitted by BobH, 8 April 2019.
+++I hate to disagree, JohnK, but I love Gavin MacLeod's Alpine hat. His character was meant to drip oil, and that hat helped make the point. Anyone who trusted Dan Platte deserved what they got. Just MHO. Submitted by "The Mad-Hatter" Rickapolis 05/17/22
Attention Car Buffs!!!...2 great looking vehicles on the street outside the courthouse, coming out of commercial around the :36 minute mark. Unknown "woodie" station wagon crosses the intersection from right to left. Facing the camera and corner is a beautiful circa 1959 white Ford Thunderbird. Bob61571, 23 March 2017

All Hams on Deck. Perhaps in honor of Robert H. Harris, who appears in this episode, both Gavin MacLeod and Michael Constantine give scenery-chewing--and, in one case, gum-chewing--performances worthy of the Master himself. Submitted by BobH, 6 April 2019.
+ Harris seemed almost sedate in this episode. tho maybe it's just that he was so upstaged by Contantine's chewing - TCOT Runaway Repast would have been a fitting alternate title ! - that he just blended into that well-gnawed scenery. Notcom 091421.

So, when Pappy Ryan kept complaining about the problems with his car, why did I keep thinking that he should have tried a little shot of Windex to make it all better? TriviaSleuth 8/17/19