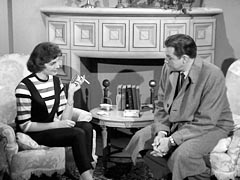 From The Perry Mason TV Show Book (Revised)
Check out the lineup of women in this opening scene. It looks like a 1950s Hollywood casting call. Eva Martell gets a part, not on stage but impersonating Helen Reynolds, a woman she has never met. She is paid extremely well and given a beautiful apartment to live in with her Aunt Agnes as long as she continues the charade. Still, Eva suspects foul play in paradise, and seeks the advice of a good lawyer.

Perry steps in and meets with the real Helen Reynolds, who swears she is not doing anything illegal, but cannot reveal her motives. That’s fine until they find that dead body in her apartment…

Sightings: You can see the man PaulDrake33 refers to in Episode #48, “TCOT Purple Woman,” in the courtroom gallery in this episode—a dark-complected man with a pencil-thin mustache who resembles Leo Carrillo. This time he is more inconspicuous. Submitted by gracenote, 8/11/2010.
+ And now we call him Pencil Mustache Man. Submitted by gracenote, 8/20/2010.
+ Another spectator of the proceedings is Distinguished Gentleman #1, who has donned glasses for the occasion. He is seen, for instance, in a cutaway to Mr. Reynolds. And “Miss Carmody” is seen as Burger stands up to make an objection. As the court recesses we see Distinguished Gentleman #2 file out with the others, and as court resumes, Quiet Old Man #1 files in. And sitting near him is the Little Old Lady in a Hat. Submitted by gracenote, 2/14/2010.
+Distinguished Lady #4 is in her favorite spot in the back row behind Perry. Submitted by BigBill767, 2/4/17.

Uncredited Actors: Don Anderson appears as the Interstate Detective operative trailing Maggie Mahoney and her aunt in the restaurant. Submitted by FredK, 2 October 2010.

In a very odd shot closing the trial, Perry is shown with the back wall behind him as he makes the final comment to the murderer. However, there are neither spectators nor courtroom door behind him -- just a blank wall. I speculate it was a re-shoot after the dailies had been viewed. cgraul 4.11.2012
+ Actually, if you look closer, you'll see that Helen Reynolds is on his right, and a man's sleeve is on his left. The center IS a blank wall because the doors are offset to the sides of the courtroom (see Wiseguy70005's reply below). This is the corridor people approaching the bench used. LazarusLong 5.24.2016
+ In this episode we see the entrance behind Della on the side of the courtroom rather than along the back wall [as in the following episode "The Glittering Goldfish" where there is a dramatic shot of the doors opening to allow a spectator (and the camera) in and the camera proceeds straight down the aisle to the judge]. In this episode, when Paul comes in to talk to Perry, he has to make a 180 degree turn after going through the gate. How often do we see this alternate courtroom set? Submitted by Wiseguy70005, 8/05/12.

Stock Music: The music heard at the start of the episode as the women wait for an appointment with Slater and continues as Slater looks Eva over is called "Street Moods in Jazz" and was composed by Rene Garriguenc especially for the CBS Music Library. It can be heard in many episodes of Perry Mason and The Twilight Zone (and undoubtedly other CBS-produced series of the time). And like the jazz theme composed by Jerry Goldsmith (see trivia note, episode 47, "The Jilted Jockey") it has become so identified with The Twilight Zone that it appears on Varese Sarabande's Twilight Zone soundtrack along with Goldsmith's jazz theme. The 4:05 track, also entitled "Jazz Theme," can be found on the album (Volume Four, STV81192) and CD (''The Best of... Volume One, VCD47233). Submitted by Wiseguy70005, 8/05/12.

Syndication cuts: Scene of Eva and Agnes in the bedroom discussing Slater, seeing out the window the men who are following them and thinking they made a mistake; Mason tries to make a deal with Burger but he refuses; Barbara Slater's first testimony. Additional Hallmark cuts: Mason explaining Eva and Agnes could be charged with felonious entry, larceny, grand theft or bunco; asking why they took the job, because they needed money for Eva's music studies [in the uncut/syndicated versions Perry says they need protection because they want to continue the money for music studies, in the Hallmark version because they are being followed]; Mason asking Helen why she commissioned Slater, Helen saying it's her business, Mason agreeing as long as she breaks no laws or jeopardizes others' rights; Helen saying she hates men like Mason, Mason saying she must sign the document or explain the situation or he will instruct his clients to return to their own apartment; Drake telling Mason he had the perfect opportunity to discover who was tailing Mason's clients; Drake's info about the Interstate detectives feeding info and reporting to the client in person; Mason asking Agnes to tell what happened, what kind of gun she had, Agnes saying she lied about having one, telling the police the truth and not disturbing anything in the murder room; conversation between Della, Paul and Perry after the judge adjourns for the day [a three-note piece of music is dubbed over Perry and Della preparing to leave to indicate the end of the act]. Submitted by Wiseguy70005, 8/05/12.
+ MeTV wisely showed the bedroom discussion/window seeing shots Today: both are important Context scenes. Mike Bedard 6.13.16 In the MeTV version I just watched, Agnes is taken in for murder at Perry's office and the next scene is both women at the defense table at court being accused of murder. Was something cut here? -yelocab 08NOV18
+ Eva stays behind and speaks with Perry. She tells him that she was not with Aunt Agnes all day contrary to what she told Tragg. Perry meets with Burger to tell him Eva's statement may have been in error and wants Burger to not take any action against her. Burger says "no deal". Kilo 1/11/2019.

Unsolved mysteries: Once again Perry and Paul were stymied when they failed to learn the identity of Barbara Slater's male friend. There was a similar situation in episode 42 TCOT Pint-sized Client. Submitted by H. Mason 9/28/14

Burger's office: The old establishing shot from episode 10 TCOT Runaway Corpse was used instead of the newer one shown in episode 22 TCOT Fugitive Nurse. Submitted by H. Mason 10/15/14

Although Arthur Marks was probably the most prolific of the series' directors (credited with over 70 of the episodes), this episode was oddly cold in its portrayal of the characters. Two beautiful women were not enough to raise the interest level of a great story above the mundane. cgraul 4.11.2012
+ Arthur has 76 Director, 101 Producer & 43 Associate Producer credits [IMDb PM series]. Mike Bedard 6.9.16. //

I have to respectfully disagree with cgraul. I thought this was one of the more compelling episodes: 'Grant Reynolds' cold, 'win-at-all-costs' attitude is one the most unpleasant portrayals I've seen. The man is almost psychopathic in his rage, as Perry points out, against anyone (or anything) that might threaten his hold over his wife (or anything else he 'owned'), suspecting her of cheating with little evidence. And considering that he suspected (actor Joe De Santis as 'Melvin Slater', not exactly the handsomest man you could find) him on sight ... there was even a little lightening at the end when Paul revealed that he couldn't find out who Helen Reynolds was seeing! MikeReese 7/31/2012

As a Sally Field fan (especially in her Gidget incarnation), it is fascinating to me to see her mother--Maggie Mahoney--in this episode. "The apple doesn't fall far from the tree." Submitted by 65tosspowertrap 9/16/2013.

I'm amazed at the scathing denunciations that Helen Reynolds hurls at Perry. I don't recall any other character in any other episode talking to him like that. Perry seems unfazed by it. I suppose you have to have a thick skin to do what he does. Submitted by 65tosspowertrap, 5-16-2014.
+ Scathing, yes, but Perry was asking her to sign a scorched-earth indemnification. I've had to sign a few of these along the way, and never been very happy about it. She's just voicing the feelings of behind-the-8-ball litigants everywhere. JohnK, 25 August 2022

+ Helen or Doris ? Brunette or Blonde? Much as with Ginger or Mary Ann ?? PM offers up its own eternal question, comparing this denunciation with the one offered in Ep2 ("I won't tell you what I think of you...") Proffered by Notcom, 071219.

Why doesn't the husband simply give Interstate Detective Agency a photo of his wife instead of just describing her? Submitted by scarter, 7-13-14

More questions: How did Mrs. Slater know which apartment to go to when she was looking for her husband? Did she go through the building knocking on every door? Did Agnes and Eva get paid for the time they lived in Helen's apartment? Even though Melvin Slater was dead Mrs. Reynolds should have been responsible for paying them. Submitted by H. Mason 10/15/14
+ and Agnes should have been charged with theft of $1,800 from Mr. Slater. jfh 27Jul2020