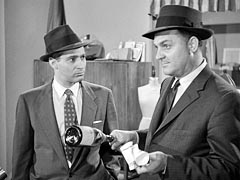 From The Perry Mason TV Show Book
A madcap murder puts an end to high-fashion queen Flavia Halliday. Flavia gasps for her last breath after her husband Charles puts a glass of champagne to her lips. “Charles poisoned me” are her dying words to ever faithful companion Leona Durant as she fades away in Leona’s arms.

Did Charles and his gorgeous girl friend Hope Sutherland (played by Leslie Parrish) have a motive to poison Flavia? She had made a fool of Charles on national TV and denied him the divorce he had been wanting for so long.

It’s a tongue-in-cheek case for Perry. 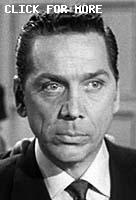 The first scene in this show is of a television emcee interviewing Flavia Pierce. The television emcee was played by Truman Bradley, making his only Perry appearence. Baby boomers will remember that Truman Bradley was the narrator for the syndicated Science Fiction Theater for two years from 1955-1957, for a total of 76 episodes. Amazingly, since he was only 55 years old at the time, this was the final screen appearance for Truman Bradley. Submitted by PaulDrake 33, 19 May 2009.
+ Also, Truman Bradley is incorrectly identified as the narrator of the Person to Person-like program when he should have been credited as the host. He also sort of resembled Charles Collingwood who was the actual host of Person to Person at the time (and had interviewed Raymond Burr prior to this episode, as seen in the Perry Mason 50th Anniversary Edition DVD). Submitted by Wiseguy70005, 2/5/14.

Flavia, the murder victim, is played by the great Marie Windsor. Ms Windsor was a wonderful actress who had a great "B-movie" career, including The Narrow Margin (1952), City That Never Sleeps (1953), and The Killing (1956), and transitioned successfully to TV. jfh 20Oct2017.

For the third consective show there is a different Deputy D.A. This time it is Les Tremayne as Stewart Linn. Tremayne would make 8 appearances on Perry in total, but this was the only time he played a D.A. Fans of old-time radio will remember Les Tremayne as one of the giants of the medium. Submitted by PaulDrake 33, 19 May 2009.

Location: About 26 minutes in, there is a quick shot of Parker Center 150 N. Los Angeles Street. Submitted by Eric Cooper, 23 September 10.

That’s right, classic TV fans! That's Darrin’s boss, Larry Tate from Bewitched in this episode. (If you haven’t made the connection yet, it’s David White.) Submitted by gracep, 10/4/2010.

This episode is one of a very few times that George E. Stone speaks in his role as Court Clerk. Submitted by gracep, 10/4/2010.

Sightings: The courtroom gallery is bursting with anonymous regulars. As Lt. Tragg is called to testify, we can see Distinguished Gentleman #1 and Cute Young Lady seated behind the harried deputy D.A. Across the aisle sits a Quiet Old Man (#1) next to Distinguished Lady #3, who is next to Hope Sutherland (Leslie Parrish). At the far end, behind Della and Perry, the Little Old Lady in a Hat and Distinguished Lady #2 watch with interest, as does another Quiet Old Man (#2) behind Perry’s shoulder. Read about all these recurring coutroom spectators here. Submitted by gracep, 10/4/2010.
+ Distinguished Gentleman #1 plays a waiter around the 10 minute mark. Distinguished Lady #4 is in the courtroom behind Perry (back row). And Miss Carmody joins the court after lunch. Submitted by Bill767, 10/31/15.

Uncredited Actors: Robert Wegner plays a three peat today. He is first a stockboy at the store wheeling in some dresses; He then shows up as a cop after the murder; finally he watches the court proceedings from the DA back row. Submitted by Bill767, 10/31/15.

Costumes: Special mention is given in the credits to real-life costume designer Charles La Maire, who created the gowns and fashion drawings for this episode. La Maire was the executive wardrobe designer for many iconic films, such as The Seven Year Itch, How to Marry a Millionaire, and All About Eve. Submitted by Fifty-Niner, 19 April 2011.
+He has 222 Wardrobe Department & 65 Costume Designer IMDb credits. Mike Bedard 8/4/16

Two cups from the Curious Coffee Set make an appearance in Perry's office during a break in the trial. Via email from Evelyn, posted by daveb, 7/17/11.
+ At the close of the show the set's matching sugar and creamer are brought out, as well. In addition, Della has turned in her old glass coffee carafe for one of those shiny chrome jobs with a bakelite handle. I am not completely sure, but it sure looks a lot like my family's old Sunbeam Coffeemaster. Submitted by catyron, 11/28/2017.

There are NO CAST CARS, but three incidental cars are seen on the street outside the court building in the only outdoor shot of the episode:

Inside: Another show done on interior sets with the use of stock footage exterior establishing shots. Submitted by H. Mason 10/30/14

Definitions? Modiste: One who makes and sells fashionable dresses and hats for women. Madcap: Very foolish or silly...MikeM. 8/5/2016

According to Wikipedia, Leslie Parrish has been very active in political and environmental causes. She was a delegate for Eugene McCarthy at the 1968 Democratic Convention in Chicago...MikeM. 8/5/2016

This is the second of three PM writing credits for prolific television writer Harold Swanton...MikeM. 11/11/2016

Taking the Fourth (away) ...in a manner of speaking (there's perhaps a technical term for it, but if so I plead ignorance): while we're watching the show-withn-a show, there's a neat trick where the camera shifts - quite seamlessly - between the POV of the fictional camera, and the actual filming of the episode. Suitably impressed, Notcom 120417.

Flibbertigibbet: A Middle English word referring to a flighty or whimsical person, usually a young woman. In modern use it is used as a slang term for a gossipy or overly talkative person. Kilo 9/23/2019.

In comparison to the usual knives, fireplace pokers and guns left in the glovebox, this episode features a most unique murder weapon. See for yourself. Submitted by Bill-W2XOY on 08/15/2013.

Semantics: The victim was poisoned. The item was not necessarily a weapon, but a unique way to deliver the prussic acid. Submitted by H. Mason 10/29/14

Hard to believe the item (we have avoided mentioning above) was not removed by the person responsible for Flavia's death. Submitted by H. Mason 10/30/14

It caught my attention when the medical examiner looked down at the fully clothed Flavia lying on the floor and said, “No postmortem lividity.” Postmortem lividity is the pooling of blood in the lower or dependent parts of the body, blood caused to settle by gravity, and in a person who died supine it would be visible from the back and sides (the victim’s clothes having been removed). Not sure how he was able to tell by looking at her face! Submitted by Dan K, 6 January 2019.

So in addition to guns in the glove box, folks in Los Angeles drive around with cyanide in the trunk! DOD 09/18/20

One of the episodes where Perry has a "rush job" for Paul. Submitted by HamBurger 8/9/2014

In this episode we learn of ante-nuptial, as opposed to the more common post nuptial agreements. DOD 09/05/19

Clairvoyance: Early on when Henry De Garmo is trying desperately to reach Flavia, he says, "I don't care of the lines to Los Angeles ARE busy; try wireless or something!" . Too bad texting wasn't around, huh (sure, he meant radio...) :-D Submitted by Arisia, 03/02/18

Venue: given the (initial) lack of certainty as to whether/not this was actually murder, this case would seem to have been an excellent one to have either taken place at a coroner's inquest, or simply investigated ex curia ( a la TCO a Place Called Midnight). Granted, there are many other shows where there is an absurd lack of evidence against Perry's client, and that lack doesn't prevent prosecution, but this is one of the few - maybe only - ones where the deficiency is so clearly pointed out in the proceedings. And of course it also would have been convenient to skip the courtroom since show was lacking a permanent DA at the time. Submitted by Notcom, 103115

This episode contains one of the most absurd scenes in any show, especially a PM episode: After Flavia collapses, Charles goes to her, she states she is poisoned, and he dumps her head back on the floor and rushes around, grabbing the bottle, running to the water fountain, back to the office ... all while his wife is lying on the ground dying. Does he call the police? Yell for help? Nope, just this ridiculous jumping around while she lies alone on the floor. cgraul 11.11.16
+ Actually it was NOT absurd at all. Have you ever heard one of the definitions of 'mixed emotions'? It's "watching your mother-in-law drive over the cliff in your brand new Mercedes". Charles was paralyzed by a number of mixed emotions. First, he wanted a divorce but, she wouldn't give him one; second, he had just found out that Flavia literally owned EVERYTHING. Third, Hope gave him that bottle of champagne, and if it DID contain poison, he wanted to protect her. Fourth, her dying would be the perfect solution to every single problem in his life. So, he was LITERALLY frozen and unable to act (clearly or otherwise) due to the mixed emotions flooding his brain. This happens very often in real life too. How many times have you thought, "Gee, I should have done (or said) such-and-such!" Submitted by Arisia, 03/02/18

Why didn't Perry ask Tragg, when Tragg was on the stand, whether the bottle had been found to contain cyanide? Or indeed ask the deputy DA before the case went to trial? If the poison was delivered via the broach, there would presumably have been none in the bottle and therefore no case against Charles. So I'm puzzled about that. Further, since cyanide is so quick acting, if it had been in the cup, Flavia (who took a sip in Charles' office) would have had no time to go out and start putting the cape on before succumbing. Submitted by Clothears 28/2/2020.

To me, John Conte strongly resembles Richard Conte who starred in more than 100 films in the 1930s-70s, although I can find no reference to any family ties between the two. jfh 23Aug2018.

Even by the standards of the time, this episode seemed patriarchal to an extreme. There were numerous snide remarks about the weakness and unreliability of women, even from Perry. Creepy George Halliday threatens with a smirk to put his would-be girlfriend "over his knee" and later speaks in court about "retreating from the field," as though it was only due to his gallantry that he didn't have his way with her. At least Judge Ankrum called him on that. In an episode with a comparatively rare woman character who is a savvy business owner that gets her way despite her husband's wishes, it is almost as if the writers resented portraying a capable woman whose life didn't revolve around a man. So they had her killed. Submitted by Vladimir Estragon 12/4/20.