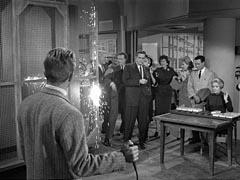 From The Perry Mason TV Show Book (Revised and Amplified)
Bonnie Craig is accused of dispatching her cousin, an aspiring poet who claims to channel the writing of her late brother, Thomas Leslie Walker, another would-be bard and the subject of a wealthy, vulnerable, grieving mother’s obsession.

Perry comes up with another of his demonstrations—this one involves both ESP and a 22,000-volt contraption known as the Faraday Cage—to defend his client and solve a related mystery.

This episode features a Clary DE-60 Computer furnished by the Clary Corporation of San Gabriel, California. Very cool at the time I imagine. Posted by daveb, 9/1/10. Some pictures and more here.

This is dashing Karl Held’s third appearance as David Gideon. The first was in #122, TCOT Grumbling Grandfather. He will make six more appearances as this character. Submitted by gracep, 11/22/2010.

The presence of Dr. Andrija Puharich marks one of the few times a character plays himself in the series—perhaps in this case to give the episode, dabbling in the paranormal, a little relevance and credibility. Dr Puharich appeared in and consulted for a short-lived series in the 1960s called One Step Beyond, the forerunner of today’s anthologies that re-enact “real stories” of the supernatural. This show was a rival to Serling’s The Twilight Zone. Submitted by gracep, 11/29/2010.

This is the first of two Perry appearances for Kent Smith, the second being The Case of the Prankish Professor (1963) as Dr. Curtis Metcalfe. It's always good to see the ever-handsome Kent Smith. He was so perfect in those 1940s films. jfh 04Oct2017.

Some Psychic: At about 27 minutes on the DVD, in Dr. Puharich's office, the phone rings and it's for Perry. But despite the lab equipment, technicians and large bottles of elixirs about, this supposed ESP expert anticipates none of it. JohnK, 12 October, 2015.

Seen and featured in the laboratory scenes, in a rare appearance on network television, a Faraday Cage! The normal purpose of which is to shield the things inside from higher frequency electromagnetic fields outside. Having worked with these things in a past life, its use here makes little sense to me. Especially as there is no evidence that any communications, let alone electromagnetic, is going on between test subjects that could be blocked (thereby verifying its existence). Why the cage should be electrified at 22,000 volts (is that AC?) makes even less sense. It does make for a nice show however. Submitted by daveb, 12/1/2010.

At the beginning of this episode, there is a shot of mansion on a cliff overlooking the ocean. There is a thunderstorm going on. Cut to a shot of the night sky, and a bolt of lightning cuts across the screen accompanied by thunder. The scene changes to a shot of two gravestones, the names close enough to be read. Then the scene cuts to the outside of a mansion in the middle of pouring rain. These shots are identical to the beginning of the episode TCOT Sleepy Slayer, with the exception that the Sleeply Slayer omits the shot of the two gravestones. Submitted by Charles Richmond, 1/20/13.

Sightings: A few recurring spectators dropped by the courtroom hear about the occult. “Sasha Magaloff” sits in the back row behind Mr. Craig, Dr. Younger, and Sylvia Walker. Behind Mr. Craig (and next to Magaloff) “Miss Carmody” takes it all in. Pencil Mustache Man appears (blurred) in a cutaway of the defendant, and next to him is Quiet Old Man #2. Submitted by gracep, 11/29/2010.
+ "Sasha Magaloff" is now known to be the actor Mitchell Rhein. Submitted by catyron, November 16, 2020.
+I think we get a glimpse of "Distinguished Gentleman #1" (wearing glasses) leaving with the other spectators in the back row on the defense side when the judge grants Perry a recess. Submitted by JazzBaby, 03/02/2019.

This episode has NO CARS. Other than shots of the spooky mansion and gravestones, there are no outdoor scenes either. No Wonder. It's pouring out there! Added by Gary Woloski 1/22/13.

The Curious Coffee Set in Perry’s office is seen along with one of those sixties era playground arts and craft things we all did; The Ceramic Style Bowl. One such item I remember doing was an ashtray from back then, when smoking was not as taboo. Submitted by HamBurger, 10/12/2014

Seems like an unusually large number of characters in this episode had some kind of electrical training. Submitted by Wiseguy70005, 1/14/15.

This is the second of two PM appearances for Sonya Wilde, who was born in Oak Ridge, Tennessee, in 1939. Oak Ridge was home to the Manhattan Project, which developed the atomic bomb during World War II...MikeM. 1/4/2017

Syndicated cut? I do not remember ever seeing on cable TV the brief scene early on where nefarious Philip Paisley visits Princess Charlotte to get her coaching. Without that scene, we are left wondering (at first) whether he's as fake as he seems to be. I really appreciated the clarity that brief interchange gave us. Submitted by JazzBaby, 9/13/2019.

All Aboard! At about 40 minutes in, Hamilton Burger raises the spectre of a one-way ticket to the gas chamber. Do they sell round trips? JohnK, 26 November 2021

At least once during the incidental music to “Meddling Medium” we can hear an homage to the theme music of The Twilight Zone. Submitted by gracep, 11/29/2010.

The rather inappropriate desire Philip expresses for his first cousin seems rather daring, even for today! And this marks the second time we see a quasi-incestuous situation, the first being a nephew-aunt affair (see this comment). Submitted by gracep, 11/29/2010.

This is absolutely one of my favorite episodes. It has both gothic and sci-fi elements and even mild horror. The first half is gothic—the house, the rainstorm, the writing, even the book of poetry—and the second is all sci-fi—the paranormal tamed and rationalized for your reassurance—but it’s still fun! Submitted by gracenote, 13 June 2011.

Anyone familiar with scientific research of the time shouldn’t be surprised at Puharich’s presence here. There was, for a brief time, serious interest in both the science fact and fiction worlds into “Psi” power. The test cards, the Faraday cage and the computer all figured into a serious attempt to ascertain if there was such a thing. This business never quite goes away, there is an excellent Columbo that deals with the related phenomemon of “remote viewing.” Submitted by MikeReese, 12/1/2011.

Addendum: The episode of "Columbo" I mentioned is 'Columbo Goes To The Guillotine", starring Anthony Andrews and Anthony Zerbe, as a sort of James Randi type ...if I said anymore, I'd be giving the story away, and it's a pretty good story. Since I knew a bit about the 'trickery' in the story, my wife, a Columbo fan, shushed me for the whole show! Submitted by MikeReese, 1/4/2017

Further info: I suspect the 'Faraday Cage' was a trick to flush out the person who knew enough about electricity to ... I won't spoil it, but I think that there was some theory of telepathy that at one time was given thought, that it was some form of actual electromagnetic transmission - so the cage was a way of blocking any 'interference' that might cross between the two people in the cage. The plot twist is that it wasn't used in the first two tests ... and anyone familiar with the science fiction world probably recalls the 'Telzey' stories of James Schmitz, or Robert Silverberg's 'More Than Human'. edited and added by MikeReese, 12/24/2015.

It's amazing to anyone today that it was perfectly acceptable for a man 'after a drunken rage' to take a 'fast drive'. No one turned a hair when that was said. Submitted by Rickapolis 05/02/2012

Instead of showing the scheduled episodes 129 and 130 today, Hallmark Movie Channel showed episode 1, Perry Mason Returns, of the two-hour modern PM series. Apparently HMC did not notify FIOS TV, which gave program info for the original shows. Submitted by MikeM, 1/28/2013

Hallmark Movie Channel is showing this episode as the first of a Saturday PM marathon today. Submitted by MikeM, 2/16/2013.

Poetry Sells: Philip Paisley had a best seller of poetry, supposedly from a dead man. Too bad he was killed. He might have given some tips to Ben Nicholson, publisher of The Pleides, the poetry magazine seen in episode 108 TCOT Envious Editor. Submitted by H. Mason 11/12/14

Poor James Forrest - in “Dodging Domino” he was electrocuted in his bath, here he dies in a plunging elevator. The guy just can’t get a break. DOD 11/11/20

Thinking Inside the Box(es) Claustrophobes beware: practically the entire episode takes place in one of a number of crowded rooms (a living room, Perry's Office, The Courtroom, a lab); the theme of enclosure even extends to the MO of the murder (an elevator) and the denouement (Farady Cage). Submitted by Notcom, 122815.

Lea Marmer (Princess Charlotte) bears a startling resemblance to Maureen Stapleton in some shots. This episode may set a record for the least amount of courtroom time - can't amount to much more than 4 to 5 minutes. The telepathy angle was very trendy then. Even the military was spending millions testing the possibilities of ESP. Surprise! - nothing came of it. Kent Smith appeared in two of the most memorable horror films of the 40’s - ‘Cat People ‘ and its sequel ‘Curse of the Cat People’. DODay 10/03/17

High Voltage Wall: That wall of switches has a few technical flaws. The two switches on the far left are shorted out by their external wiring so serve no purpose. Same for the light bulb but remarkably it's still lit! It also appears that the bulb starts to extinguish a tad before the switch is thrown. Possibly by a stage hand. Also, isn't it convenient that none of the switches are labeled. Seems odd for a 22,000 volt control panel. Kilo 3/29/2019.
>Low Wattage Logic Maybe the bulb has ESP ?? The premise of the of the reveal was that because the killer had electrical training (gnerally) s/he would be able to instantly determine which switch to throw on equipment they had never even seen (specifically). This is, of course the kind of naive, screwy logic the show often turned to - "How did you know he drove a FIAT, Perry? Easy, Della, he served us spaghetti !!"...both one of it's maddening features, and yet part of its charm. Ciao, Notcom 031220.

It seems amazing that Bonnie Craig’s aptitude for ESP is being tested in the presence of witnesses with strong personal biases for/against her (one of whom being the actual murderer!), and that the first test is done with the ‘assistance’ of the revenge-hungry widow of the man Bonnie is accused of murdering--talk about psychic interference! But then, this scene is really show biz on Perry’s part, intended to get the killer to reveal him/herself. ckbtao 6/6/20

Does anyone have an explanation for the fraudulent medium getting the poem out of the safe? The exact wording of this poem persuaded Mom that her son was speaking from beyond the grave. We find out the medium was a fraud but never learned how he managed that trick. I think I saw the complete episode (including the Princess Charlotte scene) but saw nothing to explain that. Thanks. SoCalSis 17 Nov 2022

When Bonnie shows Phillip to his room, Tom’s old room, we learn Phillip and Tom corresponded regularly, and likely shared some of their writings. DOD 12/13/22