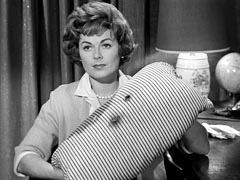 From The Perry Mason TV Show Book (Revised)
A bitter Mike Preston (played by Bill Williams, Barbara Hale’s husband) is so driven to entrap the man who allegedly crippled him and stole $100,000 that he doesn’t even notice that his housekeeper, Lydia Reynolds, is in love with him.

In his haste, Mike makes a big mistake and tries to catch the wrong man. Meanwhile, the real thug sets Mike up and frames him for murder.

Perry takes Mike’s case and helps him find a way out from under his problems and his resentments. Mike finally sees the light and gets involved romantically with Lydia.

Uncredited Actors: Possibly, Don Anderson appears briefly as a uniformed policeman walking in the foreground as the police survey the crime scene at the well. Submitted by gracep, 12/20/2010.
+ Anderson also appears onscreen momentarily at a table (with a brunette companion) in the restaurant where Phipps and Jamison meet. Unfortunately, after Jamison sits down and shifts in his seat, we can‘t see Anderson any longer. Submitted by gracenote, 7/23/2011.

Sightings: That might be Distinguished Gentleman #1 blurred in the background as a waiter in the restaurant where Phipps and Jamison are first talking. But it certainly is the Thin Man as a plainclothesman at the crime scene. He is gathering up an electrical cord and exiting from view as Perry and Paul approach the shack at the well. Later, in the courtroom, Little Old Lady #1 peeks among the spectators, and the Pencil Mustache Man sits directly behind Miss Hamilton. Do you know who they are? Submitted by gracep, 12/20/2010.
+ But wait, there’s more! Quiet Old Man #1 sits so inconspicuously in the courtroom gallery as to be nearly invisible. And in the final scene, Distinguished Gentleman #1 makes a second appearance as he walks through the hall of the courthouse, past the elevator. Submitted by gracenote, 7/23/2011.

Lt. Tragg (Ray Collins) must be extremely busy, because again he fails to appear despite onscreen credit. But thanks to Sgt. Landro (Mort Mills), we can rest assured of excellent police work. Submitted by gracep, 1/7/2010.

Bob Newhart was a very popular comedian in the early 1960s, soon to go on to greater TV stardom. A staple of his routines was mock phone conversations. At the end of Mike Preston’s telephone call with the airline agent, she uses Newhart’s classic line, “Well, the same to you fella!” Submitted by Mason Jar, 7/22/2011.

The bottom line on the announcements board behind the "Airline's Counter Girl" (16:16) reads "AL A LEDBETTER OPER". An Al Ledbetter was credited as Chief Electrician for two popular TV comedies from 1963 to 1971. Added by Gary Woloski, 3/24/13.

Unidentified pickup and heavy truck are at exploration site. Added by Gary Woloski, 3/24/13.

This is the first of three PM appearances for Abbagail/Abigail Shelton...MikeM. 10/20/2016

This is the only PM appearance for Shary Marshall who played Linda in six episodes of the television series " Wendy and Me"...MikeM. 1/26/2017

This is the third of five PM appearances for Rita Lynn, who volunteered to help psychiatric patients perform in plays...MikeM. 10/26/2017

This is the fifth of six PM appearances for John Bryant. Whether or not he plays the bad guy in any particular episode, I always expect him to be a villain, based on his shifty face and demeanour. Submitted by JazzBaby, 3/10/2019.
+ John Bryant also played a bank officer in a 1959 movie The Bat alongside Agnes Moorehead and Vincent Price. jfh 08Aug2022

The joke's on me! I "corrected" the spelling of Abigail Shelton's name in the credits above from Abbagail to Abigail, only to have to re-correct it back to the unusual Abbagail because that is indeed how she was credited on screen. I guess I got ahead of myself! Submitted by JazzBaby, 3/10/2019.

All in the Family: Bill Williams, Birth Name: Hermann Katt, husband of Barbara Hale who had a son William Katt played Paul Drake Jr. in the Perry Mason TV Movies.

Times have certainly changed in Hollywood. When Della opened up the present of a cougar’s fur (a rug I guess), complete with head, it was one of the more appalling things ever shown on this program. (No, we can’t show glass eyes or use the word “virgin,” but we can throw dead animals around.) Della was excited and gushed at how beautiful it was. Even Perry seemed impressed. I was aghast. The head was still attached. This was the cougar that the angry crippled man (Mike Preston) killed as an act of “mercy,” presumably, after his antagonist wounded it in the leg (as he himself was). (Did I mention the head was still on it?) Submitted by gracep 12/20/2010.
+ I'm sure Della was just humoring Preston. I can't believe that a classy, sophisticated urban gal like Della would display that hideous thing in her home! Submitted by DellaFan, 10/19/2013.
+ Ah! Suddenly, an idea for the episode picture occurs to me. Where did you grow up? This was in California of the wild west. Not the politically correct liberal socialist republic it is now. You shoot it, you display it (after a visit to the taxidermist of course). The head is the best part! This would make a nice bed cover. lol Submitted by daveb, 12/21/2010.
++ I grew up east of the Mississippi river and south of the Mason-Dixon line—not a bastion of liberalism either, by a longshot. Just own a cat, and I see him when I see that cougar. Submitted by gracep, 12/22/2010. When I lived in Detroit in the early 1960's, it was very common for families to decorate their living rooms with stuffed animals and birds, and these people were not hunters at all, but city-dwellers. Women who went to my church wore dead minks and foxes, with their heads on, wrapped around their necks. Times change. Welshwoman 01/15/15
+++ These were days when “men were men, and women and animals were…, well… women and animals!” We have seen and commented on the shrug-at-abusive-attitude-toward-women, and this cougar reflects the zeitgeist. Submitted by cgraul, 11/22/2011. (And I love driving down the Mississippi. Some pretty areas along there.)
++++ Let's all remember now that it isn't fair to judge a television show filmed 60 years ago by today's more enlightened attitudes; let's just be glad that (at least some of) those attitudes have improved! OLEF641 4/17/21
+++++ Let's discuss the other untamed beast here: this is the first of four appearances by Bill Williams; in each role he played a gruff, loud, thoroughly unlikeable character. Knowing that a sophisticated, classy gal like Barbara Hale wouldn't settle for anything less than - and certainly deserved - the very best, looking at him all I can think is "What an actor !!" Notcom, 041721.
+++++ Gross. Just awful. Submitted by catyron, May 12th, 2021.

As Elliot Dunbar is talking to Lydia Reynolds at the house, he oh-so-casually picks up that cute little gun, presumably not knowing if it's loaded or not, and starts waving it around, even inadvertently pointing it at Lydia. He could have easily accidentally shot her. Submitted by 65tosspowertrap, 10/19/2013.

Not sure if the audience was supposed "read" something in the last scene when Mike walked away with his arm around Lydia and the camera cut to Della and Perry. She seemed to have a wry smile on her face. Submitted by H. Mason 11/26/14
+ I certainly caught the look and i too am unsure if that was scripted or spontaneous. Submitted by catyron, May 12th, 2021.

I believe Rita Lynn is evident in the gallery WHILE she is on the stand testifying!!! At about the 40 minute mark. Submitted by WJones 2/21/16