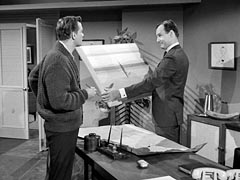 Pete Manders (Wynne Pearce) has his ups and downs. He’s been offered Zingy, a popular comic strip for a song, but finds out the reason the purchase price is so low is to appease him for the loss of his “lovebird,” Leslie, who’s flying the coop. She’s running away with previous Zingy owner, Gabe Philips, a man with two private and separate identities.

When Philips is murdered, Perry visits a hip little artists’ colony in Port Harmony to dig up the dirt on the victim’s alias, Otto Gervaert. 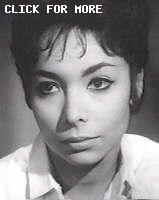 Starring Raymond Burr
in The Case of THE ABSENT ARTIST
Based upon Characters Created by Erle Stanley Gardner
Barbara Hale as Della Street
William Hopper as Paul Drake
Ray Collins as Lt. Tragg

The painting that Otto Gervaert picks up in his studio can also be seen in #187, TCOT Reluctant Model, and #260, TCOT Sausalito Sunrise. See appearances here. Submitted by daveb, 11/22/2007.

Location: In the opening scene, there is a view of a dimly lit building with the words “Merry Go-Round” on it. This is the Looff Hippodrome on the Santa Monica Pier. The La Monica Ballroom at the pier is seen in the background as Paul and Perry drive to Otto’s place. Submitted by Eric Cooper, 3/25/2008. Some pictures and vidcaps here and here.

Uncredited Actors: Don Anderson is among the guests at Gabe Phillips’ going-away party. From the number of times he appeared as a party guest, I think we can assume that Anderson owned his own tuxedo. Submitted by FredK, 3 Nov 2010.
+ Bert Stevens and Bess Flowers turn up at the same party. Quite a shindig! Later, Lee Miller appears in several scenes as Sgt. Brice. Submitted by gracenote, 7/19/2011.

Sightings: At least one recurring courtroom spectator made the field trip to Port Harmony to watch Perry Mason in action, namely Distinguished Gentleman #1 despite his busy work schedule. I suppose the others couldn’t make it. Submitted by gracep, 12/22/2010.
+ Besides that, the Gentleman removed his toupee and reprised his role from “TCOT Violent Vest” as the creepy morgue attendant, this time turning up a sheet for identification. Submitted by gracenote, 7/19/2011.
+ At a restaurant, Distinguished Lady #3 drinks and smokes at a table near Perry, Della, Paul. The camera pans by her table just before theirs. Submitted by gracenote, 7/20/2011.

Is this yet another episode without Ray Collins as Lt. Tragg, despite receiving credit in the opening and trailing titles? (Yes.) Submitted by gracep, 1/7/2010.

Don’t Bogart that joint… In the opening sequence while Myer and Glovatski are conversing under the pier, they are sharing what appears to be marijuana joint. Very much in keeping with “artist colony” life style. Weed makes another appearance in Episode 57 “TCOT Jaded Joker.“ While Lt. Tragg questions Buzzie sitting at the piano in Danny Ross’s apartment, Buzzie is kind enough to offer the “Shamus” a toke. Submitted by Mason Jar, 7/25/2011.

Music: Horst Jankowski’s “A Walk In The Black Forest” (see TCOT Missing Melody) is used as background music in the café scene with Perry and Della. Submitted by Mason Jar 7/25/2011.

Music: There is no formal music credit, indicating that most, if not all, of the score came from CBS stock music. A great moment, however, comes from Phillips return to Part Harmony, having been lured there on the phone. The repeated staccato chords greatly add to the suspense as he approaches the apartment house. Submitted by dwhite, 12/3/2011.

Sound effects goof: Just after Miss Whilom has first detected the return of Otto, and wants to go and see him, she opens a door. This is accompanied by the standard door opening/closing sound effect that is heard in pretty much every episiode. Door handle turns, a couple of seconds later and thus normally off-camera, the door gently slams shut. Only in that scene, the camera stays on the door. She and the girl haven't gone through it yet, but unfortunately we still hear the door closing. Submitted by Clothears, 22-Oct-2021.

Background Cars. When Perry & Paul drive to Otto's place in Perry's Lincoln, the cars on the highway on-ramp are:

The cars parked at the coffee shop where Perry & Paul take a break are:

The last parked car they pass on the beachfront drive before arriving at Otto's place is:

Perry's Lincoln Continental, with the doors wide open, is used as the "Stage" for the final wrap-up scene. Without actors in the way, it looks like this ('61 shown, minor differences in trim). Added by Gary Woloski, 3/26/13.

Unsolved Mysteries: What happened to the second bullet? Submitted by H. Mason 12/1/14
+ I have added a possible answer at the bottom of this page, under a SPOILER banner. OLEF641 4/20/21

Moved Body: In the previous 145 episodes the body of the murder victim was moved approximately 30 times. This case set a record. The body was moved about 120 miles. Submitted by H. Mason 12/1/14

Lane Bradford: Usually seen in many low budget westerns and usually on the wrong side of the law, appeared in this story as Port Harmony police Sgt. Buck. Submitted by H. Mason 12/1/14

This is the first of two PM appearances for Arline Sax. In her second appearance she would be billed as Arlene Martel. She reportedly acquired the Martel name when she lived on Martel Avenue in Los Angeles...MikeM. 10/21/2016.
+ Her most famous role was on Star Trek as T'Pring, the woman Spock almost married. Submitted by vgy7ujm on 28 May 2020
++ She also appeared on Hogan's Heroes seven times, mostly as underground operative Tiger. OLEF641. 4/19/21

This is the only PM appearance for Pamela Curran, who appeared in three episodes of the television series "Laramie"...MikeM. 1/27/2017

Port Mystery where is Port Harmony ?? We're told it's 120 miles away, or two hours (one half of a four hr round trip) so presumably that's not as the gull flies but rather as the gull(wing) drives. We're not told north or south, but south would be in Mexico, so presumably north: in reality it would be almost precisely at Gaviota. Notcom, 042021.
+ I figured that as well. Throughout the episode people refer to going to or being "up" in Port Harmony. In California, "up" always means "north." Submitted by catyron, May 13th, 2021.

Zasu Pitts was just delightful. Old silent-film stars have an expressiveness about them that post-talkie actors just cannot seem to emulate. Submitted by gracep 12/22/2010.

“Very well. I repudiate myself!” This quote from Glovatski when he is testifying is one of my favorites from the entire series. It’s great to see Victor Buono (a published poet, by the way) have fun with the dialogue of his character. Submitted by Ed Zoerner, 7/8/2011.
+ You said it! You know you are going to enjoy a TV show when you see Victor Buono on the screen! Submitted by gracenote, 7/19/2011.
++ Ugh. I had the opposite feeling when I saw Victor Buono. I wanted to turn off the episode, especially him as a beatnik. --yelocab 28MAR19
+++ I greatly enjoy Victor Buono and found his role here delightful. Submitted by catyron, May 13th, 2021

This was most interesting to see, not one, but four ‘suspicious’ actors in this show. Mark Roberts, Richard Erdman, Victor Buono, and Arline Sax almost always mean trouble—if they're in anything, they’re either doing dirt or so close to it they’re dusty!! Submitted by MikeReese, 12/1/2011.

The usually careful Perry Mason touched the car door when he examined the body of the murder victim. Submitted by H. Mason 12/1/14

Our killer intended the victim to be ID'd as Otto, but made no attempt to get rid of Gabe's distinctive car. DOD 11/07/18
+ Even the landlady who "sat at [Otto's] feet" didn't think it odd that undiscovered painter Otto owned such an expensive automobile. jfh 07Nov2018

+TCOT Wondering Watcher While jilted girlfriend Fiona acknowledged the change in Otto's appearance, Miss Whilom apparently took no notice of her idol Otto's radically different look, any more than she did of his owning a fantastically expensive car. Or did I miss something? Had Otto been showing up in his new look for some time? Struck me as VERY odd! Submitted by JazzBaby, 3/10/2019.

Freudian Slip? When Monty was admiring Otto's painting "Day's Catch" at Gabe's farewell party he made a Freudian slip and almost spilled the beans. He said "It looks like the work of two guys, to me". Kilo 1/18/2018.

In answer to H. Mason's question in Trivia above about what happened to the second bullet, I imagine it was something like this: When Phillips demanded to know where his money was, he pulled his gun on the other man, who lunged for it, it went off, and in the continued struggle it went off again, into Phillips' stomach, killing him. The first bullet could have been anywhere in the studio and not been easily detected, the studio was that disorderly. I suspect there originally was a scene where this was explained, but it either ended up "on the cutting room floor" or never even made onto film in the interest of making the script fit the time allotted. OLEF641 4/20/21