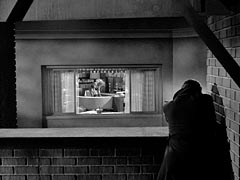 From The Perry Mason TV Show Book
When Ted Chase finds out that his very unpopular second wife, Irene, may have killed his beloved first wife, he wants revenge. Ted contemplates knocking off this Jezebel who has caused him so much pain, but someone gets to Irene first and takes her out for other reasons.

The chase is on for the killer and the police accuse Ted of the crime. Perry comes to the rescue with evidence of Irene’s sordid past and many enemies. Ted is shocked to find his late second wife was even more corrupt than he had imagined. 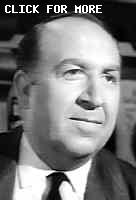 In one scene, Cecil the bartender (Jesse White) is just telling the punchline to a joke: “So, he says, ‘If it would a happened one minute sooner, I’d have had a fractured skull.’” This evidently was an in-joke of the writer’s because this is the punchline of a vulgar joke known variously as “Lucky Louie” or “Lucky, Lucky, Lucky.” Submitted by Henry McNulty, 6/5/2003. [Jokes morph all of the time and searches on those names may not easily find this one so, as a public service, here is a similar joke.]
+ We don't get a good look, but I believe one of the barflies listening to that joke -- and who we hear laugh -- is Distinguished Gentleman #1. JohnK, 18 January 2016

Another epsisode in which Lt. Tragg is credited but does not appear. Submitted by gracep, 12/23/2010.

The tune sung before Irene’s picture is “Goodnight, Irene,” which was a folk song that many popular artists had covered by the time show aired, and probably most grown-up viewers in the 1960s would have recognized it. Submitted by gracenote, 7/20/2011.
+"Goodnight, Irene" (also known as "Irene, Goodnight") was first recorded by Huddie 'Lead Belly' Ledbetter in 1933. He learned it from his uncles and it was apparently based on a waltz tempo song of the same name written by Gussie Lord Davis in 1886. Lead Belly's version refers to both suicide by drowning and suicide by self-poisoning, by the way, and is a pretty grim song. Submitted by catyron, 3/31/2018.

Ann Rutherford had an extraordinarily long career and is best known as Careen O'Hara in "Gone With the Wind". Though not quite in the top tier of stars, she was one of the sharpest contract negotiators and a savvy investor who ended up far wealthier than many of her 'A' list contemporaries. DODay 10/30/17

+ Ann Rutherford is probably best known as the character Polly Benedict, who was the primary (but not exclusive) romantic interest of Mickey Rooney's character in the "Andy Hardy" series. JohnK, 22 December 2012

Much of the music in this episode was composed by Bernard Herrmann for The Twilight Zone pilot "Where Is Everybody?" (broadcast 10/2/59). All of the music in the teaser from when Chase removes the rifle to the end (except the aforementioned "Goodnight Irene"), as Len examines the key impression, as the bartender talks to Irene, as Len returns home, as Chase calls Ellen, as Perry arrives at Chase's office, as Len burns something in the store, as Len leaves Tony and arrives at Tony's place and as Tony opens the door to the dead body. The complete 11:20 track can be found on Varese Sarabande LP The Twilight Zone Original Television Scores Volume Two (STV81178) and The Best of The Twilight Zone Original Television Scores Volume I CD (VCD47233). Submitted by Wiseguy70005, 6/25/12.
+ I think this music is appropriate because this whole episode has a dark, depressing air to it. Submitted by 65tosspowertrap, 10/22/2013.

William Schallert appeared on the popular Star Trek episode "The Trouble with Tribbles." John Harmon appeared on Star Trek twice, one of the episodes the well-known and award-winning "City on the Edge of Forever." Jon Lormer may have the distinction of playing three different characters who died on Star Trek including on the original pilot starring Jeffrey Hunter as Capt. Pike. Submitted by Wiseguy70005, 6/25/12.
+ Viewers will remember William Schallert as "Patty Duke's" dad on The Patty Duke Show. - Submitted by HamBurger 09/26/2014

This is the second of two Perry appearances for Jeff Donnell, who also starred with Raymond Burr in "The Blue Gardenia" in 1954. jfh 18Mar2019

Paul Richards had an unusual career for a person born in 1924: Although he appeared in about 100 different TV series, he only had roles in a handful of films. cgraul 8.22.12

Only the area around the driver's side window is seen. Watch as Perry hits the curb at about 5 mph; the car takes a hop and the upper edge of the body side chrome trim strip momentarily comes into view below the door handle. Compare/match the door handle, trim, etc with the '60-'62 Galaxies here. You'll get a full look at this car in Ep#149.
The only background car is the one Perry parks beside. It's a '60-'62 medium color 2dr Euro-Import, sunroof closed, otherwise unidentified. Added by Gary Woloski, 3/28/13.

When Ted went to his apartment with the stolen rifle he put it down with a package on top of it. After he got his coat and returned the second box was out of frame but obviously not on top of the flower box. Submitted by H. Mason 12/2/14

This is the second of eight PM writing credits for Robb White, who was born in the Philippines, the offspring of Episcopal missionaries...MIkeM. 10/24/2016

This is the only PM appearance for Mari Blanchard, who overcame childhood polio, but succumbed to cancer in 1970...MikeM. 1/30/2017

During the preliminary hearing, at about 33:00 on the 2010 Paramount DVD, Perry gets the Expert to concede that the fatal bullet could have been fired from a handgun and not necessarily from the rifle in evidence. Thirty seconds later, when Hamilton is questioning the Medical Examiner, Hamilton asks, “That means that that rifle must’ve been fired from a considerable distance away from Mrs. Chase?” Perry says nothing, even though his client is charged with using a rifle, not a handgun. Why didn’t Perry object? Submitted by masonite, 24 November 2010.

Good point about the handgun/rifle. Although I’m not an attorney, I think Perry should have objected since he’s established it’s not clear whether a rifle or handgun was involved—an ambiguity clearly beneficial to his client. Perhaps we should listen to how it’s referred to after? Perhaps Burger read his line wrong, deviating from the script? That aside, I really can’t imagine anyone using a rifle in this situation at all. I realize we have to make allowances for it being TV etc., but there was hardly any distance at all between the roof of the adjacent building and the apartment. A handgun would have been more than adequate. Using a scoped rifle really seems like overkill. Plus it would have increased the chance of the bullet passing through the room an striking an unintended target. In fact, it seems to me that some sort of test could have been fashioned to determine whether the bullet came from a handgun or rifle based on velocity, impact force or what-not. Submitted by billp, 28 November 2010.

Actually, pistols and revolvers are very inefficient directed killing machines. Beyond 12 feet, their accuracy depends upon a very high level of skill. A rifle is always steadier (partially due to being always held with both hands and partially due to its center of balance) and its longer bore gives greater control. From across a street, a rifle is definitely the weapon of choice. cgraul 8.22.12

Mason makes an interesting comment as he and Paul pull up in front of Benson’s apartment building: “The only solution to the parking problem in Los Angeles is to get rid of the cars.” Submitted by gracep, 12/23/2010.
+ Perry makes the "parking problem" comment just after he smacks the curb with the front wheels of his brand-new '62 Galaxie Sunliner, giving the car and Paul quite a jolt! The comment isn't related to the story and I wonder whether it was scripted or ad-libbed (was Burr having trouble or frustration with the new car?). It's also strange that Paul seems to be hanging-on-for-dear-life in the passenger seat before the impact and his demeanour is odd (was Hopper trying to humour Burr?). There seems to be something else going on here. If it isn't Raymond Burr being unhappy with the new car, I don't know what it is. Added by Gary Woloski, 3/28/13.

Legal Marriage?: This was another story where a person using an alias was married under their pseudonym. Submitted by H. Mason 12/2/14
+In the 2002 Law & Order Special Victims Unit episode "Greed" (with Henry Winkler as a suspect) it was mentioned that if one person used an alias to get married then the marriage wasn't valid. Added by H. Mason 1/16/15

Idea all wet hard as it may be to believe, at one point one of the daughters advocates an unusual method of parent raising...or make that parent razing: You can take Irene out and drown her!! Even more incredibly, neither of the two (presumed) adults present says anything. Jaw dropped, Notcom 112219.(In viewing the episode last night, I realized the daughter's remark is probably an allusion to the song "Goodnight Irene" [see above], excerpts of which are heard earlier, but that hardly explains the blasé (non) response to it. Notcom: ammended 050522)

In the end, they conclude that Irene killed the first wife. But it is not clear how they came up with that, or when it supposedly happened? There has to be more evidence than just the note? Also, in what scene did Betty Chase appear? I think that was eliminated in the syndication print I just watched. Would that make Irene’s murder of Betty make more sense?

About halfway through the show, there is a scene where Len Dykes is in Tony Benson's sporting goods store burning the stock certificates. Len hears Tony coming, so he hastily stomps out the fire on the floor. A few seconds later Tony Benson enters the store and says absoutely nothing to Len Dykes about smelling smoke, or something being on fire. Presonally if I had come into a place of business filled with paper smoke, I would have immediately pointed out the smoke. Not a very good plot device. Submitted by PaulDrake33. 20 August 2012.

+ Speaking of flammability, let's not forget all the gun oil and gunpowder that would likely have been laying about in the gunsmith's workroom. JohnK, 22 December 2021

And isn't it just a little odd that Irene would leave her balcony doors open during a fierce thunderstorm, and that the curtains weren't waving in the wind? Submitted by 10yearoldfan, 28 July 2013.

That elaborate staircase set gets yet another workout in the home of Ellen Chase. DODay 10/30/17

The radioactive poisoning angle in this story is unrealistic, to put it mildly. I am sure it sounded great at the time, but ... sheesh. Thyroid cancer looms in the poor guy's future. Submitted by catyron, 31 March 2018.
+Thyroid cancer is easily treated if caught early. He just has to alert his physician about the possibility. vgy7ujm 05/60/20

And just where does one buy radioactive whatever? DOD 11/22/19
+It is now routinely used by hospitals, and determining underground water flow. I don't know if that was true in 1962. The trouble is, it has a half-life of 8 days, so it would have to be acquired and administered frequently. vgy7ujm 05/30/20

All this is true, but chemically I-131 is no different from non radioactive iodine, which is absorbed by the thyroid. It certainly wouldn't have any mind-altering properties, just make it more likely he'd get thyroid cancer. Clothears, 22-Oct-2021.

I imagine the isotopes are near the stock of rifles and handguns in the stationery store in TCOT Skeleton's Closet, #179. JohnK, 22 November 2019