From The Perry Mason TV Show Book
When two girls lay claim to the same long-lost $200,000 trust fund, Perry must defend one of them for murdering a man who said he had evidence indicating the other girl was the rightful heir. 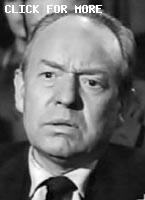 Goof: In an office scene near midway, Perry reads a newspaper, whose headline “Ranch Foremen Held in Beauty’s Death,” magically changes when he hands the paper to his client. See here. Submitted by Christopher Graul, 5/27/2005.
+That paper came from episode 106 TCOT Red Riding Boots. Lt. Anderson held the same paper in Della's office before it changed to the paper that seemed to say "CAMERA STORE OWNER MURDERED". The paper with Maureen's photo was never fully visible, but it seemed to have been made specifically for this episode. Added by H. Mason 1/8/15

Dorris Packer makes her only appearance on Perry here playing Mrs. Campion. Dorris Packer was known as the principal, Mrs. Rayburn, of the grammar school that Beaver Cleaver attended. She was also the mother of Chatworth Osborne on The Many Loves of Dobie Gillis. Submitted by PaulDrake33, 9 September 2009.

Eilene Janssen makes her only appearance on Perry in this episode as Maureen Franklin. Eilene Janssen was a prolific child actress, beginning at the age of 2. Ms. Janssen had the distinction of appearing in the very first televised episode of the long running favorite "Adventures of Ozzie and Harriet". Unfortunately, she did not find acting success in her adult years, retiring at the age of 25 shortly after this appearance. Submitted by PaulDrake33, 18 September 2014.

Location: This episode features the Burbank Airport about 5 minutes in and you can see the exterior of the terminal and parking lot. I confirmed this with Les Copeland, president, of the Burbank Aviation Museum. Burbank Airport is now called Bob Hope Airport and has a slightly different facade. It is also featured in episodes #39, #99, #165, #220 and #258. Posted by Eric Cooper, 25 May 2010. Some pictures here.
+ I've confirmed by the positions of cars and people that this shot, at 3:35-3:40, is the last five seconds of the nine-second panning-shot which opens Ep#99. Two vehicles of interest are seen in this 5 secs:

"LOCKHEED AIR TERMINAL", the airport's official name from 1940 to 1967, is written over the passenger entrance doorway. Added by Gary Woloski, 7/6/13.

Sightings: A few favorite faces turn up in the courtroom today. Pencil Mustache Man lurks in the shadows in cutaways to the defendant. Distinguished Gentleman #1 peers over other spectators from the second row. Lastly, after a long absence and with a little more makeup than usual, Distinguished Lady #1 makes an appearance behind Mrs. Fernaldi. More here. Submitted by gracep, 1/20/2011.

While Perry and his client discuss whether she should take the stand, the African-American Couple takes their seat in the back row on the prosecution side. You can see them, out of focus, over Perry's shoulder in the CU of him that follows. Submitted by JazzBaby, 3/26/2019.

CARS. In the opening shot Burt Renshaw arrives at BOLTON HALL in his

At 6:11 "Pop" Thomas visits Renshaw's "PROJECTO CAMERAS" shop. A light-colored convertible, with white top up, can be seen through the storefront window parked on the street. The Right Front corner has a very unusual profile. What is this mystery car? Added by Gary Woloski, 7/6/13.
+ The 'mystery car' is probably a 1962 Dodge Dart 440 Convertible. LouV 2/25/17.
+ Thanks Lou!!! I think you've got it! It seems obvious now that a shape like that HAD to be from Chrysler Corp. See Right-Front profiles here & here, top up here. Gary Woloski, 2/28/17.

This is the only PM appearance for Melinda Plowman, who appeared in eight episodes of The Adventures of Ozzie and Harriet...MikeM. 11/17/2016

Sorry for being critical, but I have to say that the four episodes with Virginia Field, including this one, are amongst my least favorite Perry episodes. I don't understand why they kept asking her back--I just don't care for her acting! Ed Zoerner, 8/10/11
+Virginia Field--Mystery Mom: She is in six episodes. In three of them (36, 165, 205), the plot involves whether or not her character is another character's mother. Submitted by Duffy, 10-24-2014.

Mrs. Fernaldi and Campion have similar taste in art - the same calypso prints hang on either side of their apartment doors. The baby in the photo has very dark eyes - one of the Maureens has dark eyes, the other very light eyes. Wouldn't that be an important clue? DOD 12/05/18

Can't recall another episode in which there is so much activity in Della's office.
+ I agree. Della's Office, Home of the Half Empty Shelving. Submitted by catyron, 0428.2018

PaulDrake mentions this is the second consecutive show with an equine title. It is also the second consecutive show where a character's name is said wrong. In the Case of the Fickle Filly, Della uses the wrong last name for a character in a scene where Perry uses the name correctly. Here early on in a scene between Jesse White and Ben Cooper, Cooper gets on the phone with Virginia Field who plays Mrs. Fernaldi. Twice Cooper refers to her by that name in his conversation with White, then only a few moments later during the phone call he then makes to her, he incredibly refers to her as Mrs. Renaldi. Again apparently no one seemed to notice as the show was ready for presentation.Submitted by PerryDixon 10/14/13

A Sign of the Times? It seems odd that the gate to the orphanage wasn't locked. There was nothing to prevent the children from wandering off, or kidnappers or child molesters (or nosy investigators) from getting in. Also, incredibly, the orphanage director leaves Burt Renshaw alone in the record room. I don't know if such lax security was typical of that time, but surely today such an institution would have much tighter security. Submitted by 65tosspowertrap, 11/7/2013 (revised 10-26-2014.)
+ Where were the other employees? I was bothered by the unlocked gate and the fact that Mr. Link had to go to the gate from an interior upper floor. Burt Renshaw was left alone in the room with the records because he bribed Mr. Link. Added by H. Mason 1/8/14
+ I just think it was a filmed at an estate. The exterior shots seems much to nice for an orphan home. Jonathan Hole plays another slimy character. Submitted by Perry Baby 5/5/16
+ That made no sense, even for the era in which it was filmed! Submitted by catyron, 04.28/18

You Have the Right to Remain Silent? Perry, Lt. Anderson, and Maureen Thomas are in Perry's office. Lt. Anderson states he wants to question Maureen downtown about the murder. Does that mean she was being "detained"? (He didn't say she was "under arrest.") Perry says, "On what evidence"? Anderson shows a photograph. When she blurts out something incriminating, Perry interupts her and says, "Maureen, the Lieutenant forgot to warn you that anything you say may be used against you." (Maureen gives Perry a "now you tell me!" look). This episode was made in 1962, four years before the famous Miranda Supreme Court decision which led to the Miranda Warning ("You have the right to remain silent...") that you hear all the time on Dragnet (another one of my favorite shows). This situation occurred in several previous episodes of Perry Mason. Would anyone know what rights people being questioned or arrested had pre-Miranda? Evidently they were at least supposed to be warned about self-incrimination. Submitted by 65tosspowertrap, 11/7/2013. (revised 10-26-2014)
+ Good points. The Valparaiso University Law Review, Summer 2006, has the article "A History of Miranda and Why It Remains Vital Today" by Roscoe C. Howard Jr.and Lisa A. Rich (248k PDF here). From the article: "American jurisprudence regarding the admissibility of confessions prior to the mid-1960s was based primarily on establishing the 'voluntariness' of the confession." Maureen T.'s statement sounded voluntary to me. Also, there is a well-known YouTube video here, "Don't Talk to Police", featuring Regent University School of Law Professor James Duane and police detective George Bruch. (Adrian Colley's useful Table of Contents is in the comments.) They convince me that, with or without a Miranda warning, people can easily incriminate themselves. lowercase masonite, 2/23/16.
I am not an expert, but I think the Miranda case just made it a requirement of police to notify people of their rights. They may or may not have been formally required to do so and up to that point, no one had challenged in court the lack of the warning as a violation of rights. --yelocab 29APR19

Question: Was Maureen Thomas charged for not reporting the murder? Submitted by H. Mason 1/8/15

The Italian branch of the family Hearing Mrs. Fernaldi's name frequently mentioned made me think of this book, popular during my childhood (and first appearing about the time of this show); was one of the writers also a reader ?? Queried by Notcom , 022417.

At one point Perry asks Paul to look in the orphanage records for a baby dropped off 19 years ago, about 1 1/2 years old. Later in court Perry tells Maureen that it's important to prove that she's Angela's daughter. In reply Maureen asks Perry "Mr. Mason, can you remember back when you were 4 years old?" That seems to imply that she last saw her mother when she was four. Submitted by Kilo 8/7/2018.

Genetics 101: Some viewers may have noticed that neither of the two Maureens resembled the woman calling herself Angela Fernaldi. Submitted by 65tosspowertrap, 11/7/2013. (revised 10-26-2014)
+ She wasn't the mother of either one. Why should there be any resemblance? Added by H. Mason 1/8/15
+ Exactly. 65tosspowertrap, 1-12-2015.
++ Testing, 1,2,3... This episode is a particularly vivid example of a plot, which were it attempted today, would be senseless: advances in technology - specifically DNA testing - would confirm a lack of familial connections before Maureen even had a chance to complete the in flight safety demonstration. Notcom, 121919.

How did the faux Fernaldi know about that scar on one of the Maureens?

+ Did the 1960's LA courts ever verify the identity of witnesses before they testified in a murder case? Maybe Mrs. Fernaldi's passport photo, enabling her to get into the US, looked convincing enough? And speaking of photos, Pop Thomas looked like he hadn't changed his clothes or straightened his necktie in the 24+ hours between his 2 visits to the camera shop. lowercase masonite, 2/23/16.