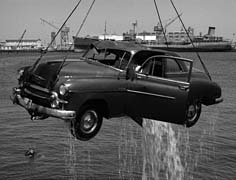 From The Perry Mason TV Show Book (Revised)
Perry himself is accused of obstructing justice when a woman—who previously faked her own suicide by running her empty car off a cliff—is accused of murdering the battered woman whom police found in the wreck.

Fans of Mister Ed will recognize Connie Hines, who played Wilbur’s wife in the popular comedy series, as Lucy Stevens, the defendant in this case.

Location: This episode opens at the Burbank Airport and you can see the exterior of the terminal and parking lot. I confirmed this with Les Copeland, president, of the Burbank Aviation Museum. Burbank Airport is now called Bob Hope Airport and has a slightly different facade. It is also featured in episodes #39, #99, #165, #220 and #258. Posted by Eric Cooper, 19 February 2010. Some pictures here.
+ This airport has had a number of names during its history. Currently known as Hollywood Butbank Airport, it began as United Airport in 1930. In 1934 it was renamed Union Air Terminal, and went through a number of renamings over the years, for various reasons: Lockheed Air Terminal (1940–1967, known informally, during at least the latter part of this period, as Burbank Airport), Hollywood–Burbank Airport (1967–1978), Burbank–Glendale–Pasadena Airport (1978–2003), Bob Hope Airport (2003-2017). It was the home, until 1989, of Lockheed's famous Skunk Works, where many famous planes were developed, such as the P-38 and the SR-71 Blackbird. OLEF641 2/11/21

Sightings: In the courtroom gallery, we find the Little Old Lady in a Hat, Distinguished Gentleman #1, “Miss Carmody,” Quiet Old Men #1 and #2, Distinguished Lady #2, and The Thin Man. Quite a crowd! More about these people here. Posted by daveb, 10/19/2010.
+ At a dramatic moment when Della, Perry, and Paul are conferring before a phone booth, Quiet Old Man #2 strolls by, dressed in a dark suit and hat. Submitted by gracenote, 23 June 2011.
+ In the back row of the court, we find Distinguished Lady #4. This seems to her favorite spot as we see her there quite often. Bill767, 1/3/16.

+ That is a perfect example of a 1960s design. Even though I was very young in the 60s, I remember the designs vividly. In a way, the carafe also reminds me of the Jetsons. Submitted by Arisia, 03/07/18
++ My mom had a similar carafe, with the same kind of markings, except it was round instead of triangular. Gosh, hadn't thought of it in simply forever! OLEF641. 2/11/21

Syndicated cuts: Lucy gets into her car, drives to the harbor, takes a packet of papers and puts a weight on the gas pedal; Mason drives Morgan to the harbor, meets Paul, car is pulled out of the water, Tragg joins them; Paul tails Burnette, Mason asks why he would travel that far to identify the body, Tragg asks why Drake is following Burnette; the autopsy surgeon's testimony [it was cut in episode 95 as well]. Submitted by Wiseguy70005, 8/25/12.

Those two repeat appearances cause me to wonder whether that bus was one which the studio used to shuttle members of the cast or crew or both to and from shoot locations nearby. Submitted by DocRushing on 10 September 2012.

Same Bank: The check Lucy wrote to her "cousin" was from the Wilshire Bank. The George Livingston account was opened at a branch of the same bank in episode 84 TCOT Gallant Grafter. Submitted by H. Mason 11/1/14

This is the only PM writing/story credit for Milton Gelman, who wrote seven episodes of Tales of Wells Fargo...MIkeM. 11/23/2016

(These "PLATE" articles are intended as a primer on the vehicle license plates appearing in the whole of the Perry Mason series.)
LICENSE PLATES. From 1956 to 1962, all California Vehicle License Plates were the 1956-Pattern having chrome-yellow base color with black characters. This so-called "Yellow-Plate" was a "Mandatory General Issue" of a pair of front & rear plates in January 1956 replacing all previous plates on all vehicles. For 1956, front and rear plates were identical, with no Validation Tags or Stickers affixed, just as in the linked image. For subsequent years, a single Validation Tag was affixed along the top of the rear plate, as on this 1960 rear plate.
The '56-Pattern was completely replaced by the Mandatory General Issue "1963 Black-Plate" which was California's last general plate re-issue and the sole California base-plate until end-69. Wiki article with full history here. Also see this 2012 news. Genuine plates during Perry Mason filming were:

In this Episode 99, the rear plate on Marjorie's Mercury is shown twice in close-up at 1:20 & 3:41. The plate can be seen to be authentic, with what appears to be the correct 1960 silver-on-blue sticker. The front plate of Lucy's old Chevy is seen as she leaves her apartment (10:06), then twice at the dock (the second time is just after the screenshot at top of this page). It's only the front plate shown, so we don't see the year sticker. I am convinced that:

"EXEMPT" PLATES. The strange symbols on police car license plates are "E"s in diamonds or octagons, indicating "Exempt" Plates. In the State of California, Exempt Plates were issued for vehicles owned or leased by federal, state or local government or by certain non-profit organizations (eg: Red Cross, volunteer Fire Depts in unincorporated areas). They were called "Exempt" because the agencies were exempt from paying vehicle registration fees. Nearly all of the "Exempt" plates seen in Perry Mason are props (FAKE).
Genuine Exempt Plates were the same size and color-scheme as the general-issue plate of the day and were embossed with the exempt designator followed by either five or six numerals. The "Exempt" designator symbol was:

Up to mid-Season 6, the only authentic Exempt Plates I've spotted in the series are:

All the rest of the "Exempt Plates" up to mid-Season 6 are props. These might have been fashioned by affixing a card (imprinted solely with an "Exempt" symbol) over the first three characters (letters) of the regular passenger-car plate issued to the "POLICE" replicar used in the show. Examples:

The images linked-to above illustrate the '56-issue yellow-plate. During Season 6 the prop "Exempt" plates switch to black-plates at the appropriate time.
As of Year 2013, the "E"-in-octagon and -diamond symbols are being phased-out and replaced by a simpler design with "CA EXEMPT" written across the top edge. Phase-out began perhaps as early as 1999. At mid-2013, the CA DMV website stated "DMV will no longer issue diamond and octagon designations when current supplies are exhausted, although both will remain valid." Added by Gary Woloski, 7/16/13.
† References: (1) Encyclopedia of American Police Cars by Edwin J Sanow, esp. p38 (CHP caption). Also, cover photo & its description on "Dedication" page.
. . . . (2) Police Cars - A Photographic History by Monty McCord.

I wonder where Lucy Stevens picked up that technique for ditching the car? I don't think I would have placed such confidence in the parking brake on an old heap like that. JohnK, 3 October 2015
+ Old heap? From YOUR perspective in 2015 maybe. However, at the time the episode was filmed it was a brand new, state-off-site-art vehicle. Back then parking brakes WERE reliable, and COULD stop cars. In fact, the technique used by chauffeurs to do a high-speed 360° to avoid a potential hijacking ONLY works on a car with parking brakes like that. Another few years later the parking brakes automatically released by putting the vehicle in gear; then it was much easier to fake a suicide :p - Submitted by Arisia, 03/07/18
++ Actually, the faked-suicide car was a 1950 model (see Cars above), not brand new, but hardly an "old heap" either, being only 10 years old, and this in the days when people kept cars longer and took better care of them. (BTW, I think Arisa means "a high-speed 180°"; 360° would leave you facing the same way you were before you started :-)). OLEF641 2/12/21

Must have been a slow news day in New York if a car going off a pier in Los Angeles made the papers there.
Why did Lucy consult Perry in the first place?
Many episodes, including the previous ‘Ill Fated Faker’ rely on rather casual identification of a body. In this show, however, even with two people I.D.ing the body as Lucy, the police conclude otherwise. DOD 09/17/19

People go skin-diving in Los Angeles harbor? Why can't Paul have a vacation? Doesn't he have other detectives on his staff? submitted by vgy7ujm, 26 January 2022

An inside joke? When the bundles of cut up newspaper are spilled on the desk, one bundle clearly reads ‘hot air’. DOD 09/17/19
+ And speaking of the cut up money, why didn’t Locke or Burnette think to examine the cut up newspaper for a date and the name of the newspaper. Since Lucy Stevens had just flown in from New York, there would have been no way she could have cut up 3000 pieces of an old Los Angeles newspaper. Submitted by PaulDrake 33, 10/24/2010.
++ She could have planned it in advance and taken the cut paper with her or left it in an airport locker. Added by H. Mason 11/1/14

Lucy was Burnette’s secretary and his office was in New York. So why did she have an L.A. apartment? DOD 09/17/19
+ Apparently Burnette was in his Los Angeles office. After the phone call from Locke about the faked money, the camera pulls out and you can see the Los Angeles Times headquarters building throught the sheer curtains covering his office window ;-) OLEF641 2/12/21

How did Marjorie Ralston's body get into Lucy's car? That is, without Lucy noticing and recoiling in horror? Granted, cars were a lot bigger then, but wouldn't she have noticed a body in the back seat of her coupe? JohnK, 25 December 2015
+ Not necessarily. The body was wearing a black dress and was removed from the wreck from the driver's side, head first, of the two-door car. The body could have been on the floor in the back, with the loose carpet or part of the dress covering the body's head. The front seats fold forward to allow access to the back. With the seats back they provide a small triangle of access to the unlit back. Lucy never looked into the back. However, she was running scared and still had left her car unlocked. A mystery is why she didn't consult Perry before running her car into the water. And with all the cars parked across the street, did she ever consider that someone might notice her? Submitted by (lowercase, with a comma and period) masonite, 02/18/19.

Alfred Hitchcock's Psycho was released exactly one month before this episode aired. There appear to be several homages to that film here. The blond woman packing up to leave the seedy motel room and putting on a kerchief. The car sinking into the water, followed by the woman staring off into the distance. The crane lifting the car out of the water.

...and the shady businessman with a mustache who likes to deal in large sums of cash. DOD 10/14/21