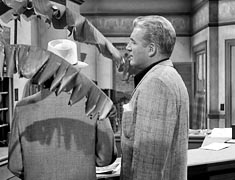 From The Perry Mason TV Show Book
This episode features all the standard elements: a successful husband, his bored wife, the freeloading, bloodsucking nephew, an $80,000 robbery, a crooked accountant, and a naive secretary accused of murder. Luckily, Perry can handle these cases in his sleep.

That little pistol that Alice Gorman uses looks to be a Browning “Baby” 25 (caliber). It's about 4" long and 3" high. Holds 6 rounds, I think. Watch for this gun in other Perry Mason episodes, it’s pretty distinctive in B&W film with its pearl handle. Submitted by billp, 31 October 2009.

Character Names: Paul Drake reveals that Stan Piper’s full name is Stanley J. Piper. Submitted by gracep 10/15/2010.
+ Anomaly: The Prosecutor’s name, as stated by Paul Drake, is Deputy D.A. Jack Alvin. No explanation as to why this is omitted from the credits. Submitted by gracep 10/15/2010.
+ No Anomaly: Credits are used to identify actors. Since the casual viewer probably would not remember the name "Jack Alvin" (it was only mentioned once before he appeared) the word prosecutor was used instead. Since he wasn't identified as a Deputy D.A. in this episode those words weren't used either. Submitted by Wiseguy70005, 3/17/14.

William Campbell, better known to Generation X for his appearances on the original Star Trek, makes his second appearance on Perry Mason. See trivia item for episode 78. Submitted by gracep 10/15/2010.

Sightings: On the second day of the hearing, Distinguished Gentleman #1, Quiet Old Man #1, and “Miss Carmody” are all sitting together on the defense side. Read more about these recurring spectators as you ask yourself, Who Is That? Submitted by gracep 10/15/2010.
+ “Sasha Magaloff” can be seen as well seated in various places about the courtroom. Submitted by daveb, 4/2/11.
++"Sasha Magaloff" can also be seen clearly sitting on a bench outside the courtroom next to another gentleman as Perry walks along the hall on the first day of the hearing. Submitted by JazzBaby, 8/30/2019.
+++ "Sasha Magaloff" is now known to be the actor Mitchell Rhein. Submitted by catyron, November 16, 2020.

SEASON PREMIČRE. This ep#98 was the Season Premičre (Season 4) according to the daily TV listing on page 51 of THE NEW YORK TIMES on Saturday, 1 October 1960:

The Toronto GLOBE AND MAIL listing for the same day was:

Medical Expert: After being given the name Dr. James Latham in his last appearance (episode 79 TCOT Lucky Legs) Pitt Herbert was again identified as "Autopsy Surgeon." Submitted by H. Mason 11/1/14

According to Wikipedia, story submitter Edward Lasko/Lakso had a music degree from UCLA. Lasko/Lakso co-wrote and scored a Russ Meyer film, The Immoral Mr. Teas....MikeM. 8/15/2016

According to Wikipedia, Sue Randall was a heavy smoker who died of lung cancer...MikeM. 8/16/2016

This is the fourth of five PM appearances for June Dayton, who also appeared in five episodes of Death Valley Days...MikeM. 11/22/2016
+ TCOT Girls Reunion it's also the second of three appearances for Sarah Selby, and - of more interest - it's the second (of two) in which they appear together. Although hardly identical - Ms. Dayton played the defendant in the earlier roll - there are substantial plot similarities (the cases both center around someone faking their death, and Ms. Selby is notably duplicitous in both). Notcom, 022522.

El Salón México by Aaron Copland is, I believe, what is played in the penultimate scene with Paul in the hotel Lobby. Notcom, 022522.

Even considering today’s “anything goes” mentality, this episode seems racy to me, i.e., the nephew having a “relationship” with his aunt-in-law. It must have been seen as particularly bold in its day. Submitted by billp 6/14/09

James Anderson is best known as the villainous Tom Ewell in "To Kill a Mockingbird". Despite his long and varied career, Kenneth Toby may be best known for three sci fi classics - “Beast From 20,000 Fathoms”, “It Came From Beneath the Sea”, and the terrific “Thing From Another World”. DOD 09/02/18

That brief shot of the fire as seen from the phone booth is taken from the end of Hitchcock’s “Rebecca”. DOD 11/15/22

Ken Toby is also well known for his appearance in Airplane. On the DVD commentary for the film, the directors implied that he didn't quite get the jokes, but he still did a pretty decent job. Submitted by Kenmore 9/29/2020.

Notice when Alice Gorman leaves the cabin which is on fire, she enters her car from the passenger side and awkwardly scoots to the driver’s side. It makes little sense in reality since entering on the driver’s side is what most folks do, especially if they are in a hurry. But from the camera’s point of view it makes perfect sense since she stays in frame for the entire scene. Submitted by Kenmore,11/10/2009.
+ Actually, in the days of roomy cars and bench seats, people would often enter on the passenger side and scoot over, especially if the car was parked at the curb and traffic was heavyish. I've seen it happen on PM more than a few times. OLEF641 2/6/21

Funny how William Campbell who played "Trelane" in the Star Trek episode reminds us a little like Liberace in that Star Trek episode and is shown at the end of this episode, when revealed by Paul Drake wearing a "Liberace" style hat ! ;-) Submitted by HamBurger, Aug. 24, 2014 <<<<<<<

Perry ID's Beautiful Cocktail Waitress as Frances Banks near the end in court but she never gets a credit. Anyone know who she is or if she appears in other episodes? Eric C 16 Aug 16 =======

"The Case of the Ill-Fated Artful Dodging Faker." At several points in this episode, Paul Drake refers to Jim Ferris's having at least one alias, but never supplies it. One can only wonder whether Ferris's alias might be Allen Sheridan (See Episode #78, TCOT Artful Dodger), another scheming nephew--also played by William Campbell--who's trying to bilk money out of a wealthy relative by claiming that gangsters are putting the bite on him. Submitted by BobH, 3 December 2016.

TCOT Kafkaesque Credits: And thus we come to the dreaded Season Four Opening Graphics by Pacific Title, which, speaking as a professional graphic designer, i find unbearably lame and useless, fading from grey dimensionality to stark chiaroscuro by way of filmic realism, symbolic of Eternal Anomie, the Endless Void of Judgement, and the Overwhelming Blankness of Nihility. Tiny Featureless Perry stands 20 feet away from the Looming Faceless Judge emerging from the shadowlands, with no one to defend but himself. There is no prosecutor to contend against, no witness to call, no secretary to take notes, no spectator to watch. We see him alive for but a passing moment, and then he blinks into linear flatness, alone, Trapped in a Sword He Never Made. This is truly Perry Mason's Nightmare, The Case of the Kafkaesque Credits. Submitted by catyron, February 22, 2021.

Another plot that relies on rather casual identification of a body. DOD 09/02/18