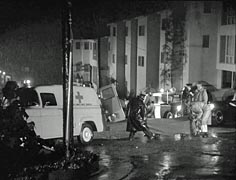 From The Perry Mason TV Show Book
Perry must defend a man who—besides being charged with killing his former girlfriend (by running over her with his car)—has also fallen into the clutches of (egads!) a dishonest attorney.

Goof: Near the end of the final courtroom scene, Marvin Claridge (Vinton Hayworth) is on the stand. He says “Because Mr. Alexander Hill approached me himself the day after Helen was murdered.” Cut to a shot of Mason saying “Thank you. That’ll be all Mr. Claridge.” Cut to a reaction shot of Hamilton Burger. Behind Burger, in the gallery to the left, we see none other that Mr. Claridge watching himself testify! Submitted by Jeff Hanson, 1/7/2003. Pictures here.

Talman, farewell. The opening of this episode goes back to the second season opening, the one where Della and Paul are at the defense table and Tragg and Burger are at the prosecution table. This must have been stock footage, since William Talman no longer worked for CBS. Submitted by PaulDrake 33, 5/22/2009.
+ This must be the third of three episodes filmed before March 1960 and not previously shown, because it was aired on 24 September 1960, 6 months after CBS fired William Talman. Beginning next week, Talman will no longer be featured. Submitted by PaulDrake 33. Edited by gracep, 10/14/2010
+ For more information about Talman’s woes and the story behind his departure, see related trivia items for episodes #87-89 and #95-96. Submitted by gracep, 10/14/2010. ++ A clearer understanding of the order of episodes can be had by observing the production numbers conveniently given at the end of each episode from third season on. This episode is Prod#99. Prod#98 was broadcast 10 episodes previously in March 1960. Prod#101-103 (with William Talman and the "new" opening) were broadcast after Prod#104-108 without the actor. Apparently while CBS the corporation wanted to fire William Talman, CBS the network wanted him on the series and mixed the episodes so that Talman would be seen occasionally while they still had episodes featuring the actor and certainly wanted him in the fourth season premiere (and the second broadcast episode of the season [this episode]) as well. So this was not Talman's farewell, he filmed another four episodes (Prod#100-103) afterwards. Another argument for putting episodes on DVD in production order and not the arbitrary broadcast order. Submitted by Wiseguy70005, 12/01/13.

Star Trek Alert: Bart Conrad, the Autopsy Surgeon, played Captain Krasnovsky in the original series Star Trek episode "The Court Martial". Krasnovsky was one of the judges in the court martial of Kirk for alleged killing a crew member (he didn't). Conrad appeared in another Perry episode, TCOT Blind Man's Bluff. Submitted by MyFavoritePolarBear, 1/18/23.

Location: About 15 minutes into the episode we see Perry pull up to a house with his client. Tragg is standing under the archway of the front door and 812 is clearly visible. This is in fact 812 N. Las Palmas Los Angeles 90038. If you Google Map it you can see the same house with the distinctive archway and odd roofline minus the awning. Also compare the archway of the 2 story apartment building to the left of the subject house. Same today. At the top of the scene you can see 804 N. Las Palmas. At the time it was 800 Las Palmas and you can see 800 on the front door. For a closer look see episode #85 where the building was the star called the “Monterey.” There is a great scene as a woman scales down the exterior on the fire escape. Lastly, this block is just 2 blocks away from the studio where Perry Mason was being shot at the time. Thus it was an easy location for cast and crew from the studio at 1040 N. Las Palmas. Try and see how many car registrations etc. appear on the show with that address. Posted by Eric Cooper 17 February 2010. Some pictures here.
+ That house was also used as the Colin home in episode 75 Paul Drake's Dilemma. Submitted by H. Mason 11/1/14
++ The exterior of Alex Hill's hotel is The Town House aka the Sheraton West, which also appears in episodes #255 and #111 (in the latter case, doubling as Perry's home.)

Sightings: Blue Collar Guy appears as a bystander at the faked hit-and-run accident scene. More about him and other frequently-seen people here. Submitted by alan_sings, 9/26/10.
+ Distinguished Gentleman #1 and Distinguished Lady #2 watch the proceedings only on the second day, whereas “Miss Carmody,” Quiet Old Man #1, and Quiet Old Man #2 show up for both days. Submitted by gracep 10/14/2010.

CARS. This is the last legitimate appearance for both Perry's '59 Skyliner and Tragg's '59 Electra 225. They do briefly appear together in a single shot in Ep#106 but I believe that is leftover footage from Season 3 used for convenience by the Film Editor to set a scene.

Background Cars: parked in the street as Perry arrives at 812 N. Las Palmas, we quickly see

When Burger asks to recall Everett Dorrell if the defense has no objection, Mason (offscreen) replies "No objection." On the Season 4 Volume 1 DVD the closed-captioning has the judge saying that line. The syndicated version's closed-captioning does not specify who says the line, correctly assuming that it is Mason. Submitted by Wiseguy70005, 12/01/13.

The Judge: Willis Bouchey made his first appearance as a judge in Los Angeles. He presided over cases in Fawnskin (episode 80 TCOT Violent Village) and Outcast (episode 93 TCOT Ominous Outcast). Submitted by H. Mason 11/1/14

This is the only PM appearance for Nan Peterson, who appeared in four episodes of The Twilight Zone...MikeM.11/21/2016

Crew Visible: When Dorrell tries to turn on his headlights the camera switches to a view of the headlights to show they didn't come on. The reflection of a crew member can be seen walking in chrome surrounding the headlight. Submitted by Kilo 8/7/2017.

Within the first 2 minutes of the episode, Everett Dorrell tells Richard Hammond that he will lend $15,000 to Hammond that evening, saying "Come to the house tonight....You better make it 9." At 8:55 PM Dorrell is at home reading, wearing what look like pajamas and a bathrobe, when he gets a phone call from the bartender at the Oasis Inn, saying that Helen Austin is threatening to kill herself. Dorrell responds, "All right. I'll be there in a few minutes."

He changes into street clothes including an overcoat, and runs out to his car (hopefully after leaving an explanatory note for Hammond). Shortly thereafter, Dorrell hits Helen Austin with his car, killing her, when Hammond drives up from the opposite direction. After they discuss what to do about the accident, Dorrell reaches into his overcoat for his billfold while telling Hammond "I've got your money here too. In cash." Why was Dorrell carrying $15k in cash to the Oasis Inn? Why didn't he leave it at home, like in a safe? Submitted by (lowercase, with a comma and period) masonite, 02/07/19.
+ In 2021 money that $15k would be just over $131k. A lot of money to be walking around with in cash! And Alex Hill's $17.50 tie would cost $153, just to put things into perspective. OLEF641 2/10/21

A “blooper” takes place when Perry and John Conwell arrive at Conwell’s home as it’s clear that it’s been raining. The street and parked cars are wet, and we see rain droplets on Perry and Conwell’s jackets as well as Tragg’s hat. Yet when the scene shifts to the driveway, everyone is completely dry. Submitted by Kenmore, 07/05/2010.

Clara Thorpe contradicts herself on the stand. Shortly after saying yet again that Helen must have had the $15,000, she tells Perry that she doesn’t claim Helen had the money. It is also odd that Helen would have told Clara about the money, considering why she needed it. In the closing scene, Paul and Hammond exit the back door and turn right. This should lead them to either the exterior wall or another office, but certainly not the way out the building. A rare episode in which we never see the victim - alive, that is. Too bad, she must have been some femme fatale. DOD 09/13/19

French Parking. The production crew included a nice touch by deliberately parking Car(a), the Renault, behind the '59 Ford in the style "á la Parisienne" (DVD 13:05). This Renault could not possibly be the same one parked in New York City in Ep#78: it would have rusted-out on the drive to LA long before it got to 1040 N. Las Palmas! Added by Gary Woloski, 9/4/12.

Once again the "two of his greatest fans," Brian Kelleher and Diana Merrill, get the episode's summary wrong. Helen Austin wasn't the former girlfriend of Richard Hammond but of his lawyer, Everett Dorrell. And she wasn't supposedly killed by Hammond's car but by Dorrell's borrowed car. It would seem "two of his biggest fans" could have done more research into a widely-syndicated episode during the long time of compiling the information for the book of their supposedly favorite series. Submitted by Wiseguy70005, 12/01/13.

Perry's office has new lettering on the door. Just three episodes earlier (in production) "The Case of the Gallant Grafter" featured the stock shot of his office door with different lettering. Submitted by Wiseguy70005, 12/01/13.
+ I'm glad Perry finally got the lettering on his door redone, because the original lettering, shown during the first few seasons, had the word "Law" slightly off center. Submitted by scarter, 8/20/14

Della looks especially ravishing in Perry's office at the beginning. Joe B. 4/17/19

Is there a more annoying series guest character than Aunt Clara Thorpe, played by Katherine Squire? Well, perhaps one of the other characters played by Squire in her two other series appearances (Episodes 199 and 240). Submitted by BobH, 2 December 2016.
+ I was watching "When Harry Met Sally", and checking a transcript I had for it, when I noticed that the woman in one of the old couples looked familiar. It took me a second to recognize that it was Katherine Squire, but, considerably older. She didn't speak in that part, or I would've recognized the voice immediately.
++ She has the second most annoying voice in the world (the MOST ANNOYING VOICE in the world is the lady whose voice is on all the self-serve check stands). Submitted by Arisia, 03/06/18.
+++ Actually, Katherine Squire does speak in When Harry Met Sally. The voice is not quite as harsh, but it's quite distinctive. It was her last role. Submitted by Kenmore 9/29/2020

After the trial was over I really hope Everett Dorrell dumped Barbara Claridge without a second thought. She's a little too snobbish to be a good wife for anyone... Submitted by Arisia, 03/06/18
+ Even for an unethical lawyer like Everett Dorrell? kfh 27Jan2020

Perry and Tragg pull up in Perry's car to discover Dorrell hosing down his driveway. They go into Dorrell's house to question him. After Tragg concludes that Hammond killed the girl he smugly walks away like he's leaving. I'd like to have seen the look on his face when he got outside and realized he had come there with Perry. Kilo 11/30/2019.