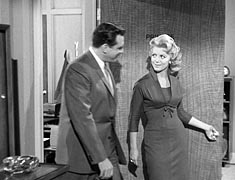 From The Perry Mason TV Show Book (Revised)
Devious Allen Sheridan, soon to inherit $162,000, has just as many enemies as dollar bills. Since he’s hurt a lot of people, and owes money to many more, when he turns up dead (murder weapon: an ashtray) his killer could be anyone.

It turns into a family affair—and a job for Perry when Sheridan’s aunt Sarette becomes the prime suspect.

Character Names: Michael Fox, listed as Autopsy Surgeon, is called Dr. Hoxie.
+ He has played this character before and will continue to do so for many episodes. A search of his name in this Wiki reveals them all. Submitted by gracep, 9/16/2010.
+ He acted in 25 Perrys, 11 as "Dr. Hoxie" & 10 as "Autopsy Surgeon" (203 IMDb Actor credits). Mike Bedard 7.18.16
+ He is also the reason Michael J. Fox was required to add the middle initial "J" to his registered acting name with Actors Equity; oddly enough, Michael J. Fox's actual middle name is Andrew. OLEF641; 11/14/2017.

Jerome Cowan makes the final of two appearances on Perry here playing Victor Latimore. Jerome was a long time movie actor and his most famous part was as Miles Archer, the partner of Sam Spade on the 1941 Maltese Falcon. Submitted by PaulDrake 33, 23 October 2009.
+ He is also fondly remembered as the district attorney trying to prove Edmund Gwenn is not Santa Claus in "Miracle on 34th Street". DOD 8/05/18

Douglas Henderson, in addition to appearing in 6 Perry Mason episodes, appeared 10 times as Colonel James Richmond in the second through fourth and final season of The Wild Wild West. Submitted by Wiseguy70005, 6/21/12.
+ He was also in "Manchurian Candidate" as the officer working with Frank Sinatra to foil an assassination plot. DOD 08/05/18

Location: The address that Latimore gives Mason for actor-posing-as-gambler Lou Caporale is 1040 Las Palmas, Apartment 4. In #89, “TCOT Crying Cherub,” 1040 N. Las Palmas is the address that appears on the registration card in the auto belonging to artist David Lambert (Joe Maross). Another Mason show in-joke? Submitted by FredK 10 November 2009.
+ The 1040 N. Las Palmas address is used again in episode #100, “TCOT Lavender Lipstick”, this time for Karen Lewis (Pat Breslin). Submitted by FredK, 26 November 2009.
++ Location: FredK (above) is correct about the address being a Mason in joke because 1040 N. Las Palmas Los Angeles, CA 90038, is the address of what is now Hollywood Center Studios. In the 50's it was called General Service Studios, and you guessed it… was where Perry Mason was shot. (Apartment 4 might have even been a reference to Sound Stage #4 but that is just a guess on my part. Depends on how clever they were being.) The studio has a very impressive history with hundreds of TV and game shows being shot there. The first few seasons of I Love Lucy as well as most of The Adventures of Ozzie and Harriet were shot here. Posted by Eric Cooper, 21 January 2010.
+++ Also if you put the address in Google Map you can see the guard gate of the studio which was used I’m pretty sure several times in episodes that involved Perry driving on and off studio lots. Globe Studios in this episode is shot at the 1040 N. Las Palmas address. If you go to Hollywood Center and then go to “history” and “timeline” then scroll down to the 1980s you can see the guard gate that Perry walks to about 30 minutes into the episode. It looks exactly the same in the 1980s photo on the website as it does in this episode… with the stop sign and everything. So giving out the address where they were shooting this episode, within the episode itself, was I’m sure quite amusing the the writers and actors. Posted by Eric Cooper, 21 January 2010. More about this address and the Studios there can be found on the Location Trivia page.

Of course, the writers derived “artful dodger” from Charles Dickens, who wrote Oliver Twist (1838), a novel about an orphan of that name. The Artful Dodger in the novel is Jack Dawkins, a pickpocket and gang-leader who befriends little Oliver. Submitted by gracep 9/16/2010.

That’s right, Star Trek fans! The man playing Sheridan is William Campbell early in his career. You know him better as powerful but prissy Trelane in “The Squire of Gothos” and the sinister and far less effeminate Klingon Koloth in “The Trouble with Tribbles.” Read more about him and see some cool pix at Memory Alpha. Submitted by gracep 9/16/2010. Find more Star Trek folk on the TV Trivia Lists page (scroll down to the show).
+ William Campbell was married to Judith Exner from 1952-1958...MikeM. 7/19/2016
++ Campbell’s ex-wife Judith Exner, a strikingly beautiful woman, was reportedly a steady mistress of JFK from 1960 onwards. She was a significant figure in the JFK assassination investigations because she also reportedly had romantic engagements with prominent mobsters. MSO 12/15/20

Sightings: Distinguished Gentleman #1 appears ever so briefly as Rudy, a waiter at the beginning of scene when the maître d’ addresses him. In the final scene he re-emerges in the background taking an order. Now in the courtroom gallery, Distinguished Lady #3 makes a steady appearance. Quiet Old Man (#1) sits across the aisle on the prosecutor’s side. The Little Old Lady in a Hat sits discreetly behind Burger as he makes an objection. And after a long absence, Pencil Mustache Man has decided to grace us with his presence in the gallery. Read more about them and the other recurring extras here. Submitted by gracep, 9/16/2010.
++ Rudy the waiter, that is, the aforementioned Distinguished Gentleman #1, also appears briefly behind Allen Sheridan (William J. Campbell) and his confederate as they are talking at the bar. Submitted by gracenote, 11/4/2011.
+++ Art Imitates Life: Thanks to the diligent research of Bill767, we now know that the actor playing durable Distinguished Gentleman #1 is named Rudolph Salinger -- he was credited in #112 TCOT The Wintry Wife as "Chemist." Here his character is named Rudy, too. JohnK, 4 January 2016
++++ "Little Old Lady #2" and "Distinguished Lady #2" also appear in the gallery. Submitted by JazzBaby, 8/22/2019.
+++++ "Distinguished Gentleman #2" appears as a waiter in the final scene. He may also be a waiter in the restaurant where Allen and Joyce meet earlier in the episode, but he moves by so quickly that I'm not sure. Submitted by JazzBaby, 8/22/2019.
++++++ Distinguished Gentleman #2 also appears briefly as a waiter in the last scene. Back in the courtroom, both Distinguished Lady #2 and Little Old Lady #2, along with Cute Young Lady appear in the gallery. Submitted by gracenote, 11/4/2011.
+++++++ Who's that sitting next to Cute Young Lady? Looks enough like her to be her sister. JohnK, 19 December 2015.
++++++++ It's in the middle distance and a little hard to make out, but in the closing scene we may see the Cute Young Lady once more, happy to be out of the courtroom on a date. And it may be that Rudy (DG#1) is the couple's waiter. JohnK, 19 December 2015

Location: Almost 4 minutes in, there is a quick shot of the exterior of the Hotel Knickerbocker located at 1714 Ivar Ave in Hollywood. It’s the hotel where Dustin Hoffman and Anne Bancroft had their romantic tryst in The Graduate. Submitted by Eric Cooper, 5 February 2011.

Uncredited Actors: A blurry Don Anderson walks behind Allan Sheridan (William J. Campbell) as the latter is talking at the bar. Submitted by gracenote, 11/4/2011.

CARS. In the opening shot on the New York City street, parked in the foreground are:

Also spotted two 1956 Ford Thunderbirds driving by the front of the Knickerbocker Hotel just as the scene fades in. Both have the distinctive Continental spare tire. One has opera windows. Submitted by Kilo 7/16/2017.

Rental car: The Pleas-Ur-Drive Car Rental Company was also mentioned in episode 41 TCOT Lucky Loser. There was no star on the windshield of that car. Submitted by H. Mason 10/25/14
+ And if you look close the star is in the upper corner of the windshield when Sarette Winslow gets into the car. But then when she drives off the star is in the lower corner. Submitted by Kilo 5/9/2018.

Celebrity Sighting - sort of: When Aunt Sarette looks up Ralph Curtis in the Manhattan phone book, we see a number for a Tony Curtis at 267 Park Avenue. JohnK, 19 December 2015

The MeTV version today had a product insert in the lower left corner during the closing credits. The three products shown were: Halo shampoo; Wildroot Cream Oil; and Colgate Dental Cream with Gardol...MikeM. 7/19/2016
+ It is also like this on my (CBS) DVD collection. Submitted by HamBurger 7/2/2018

This is the first of five PM appearances for Vera Marshe, who appeared in eleven episodes of The Adventures of Ozzie and Harriet...MikeM... 10/25/2016

Placement ?? After brief inquiries convince her something is up (other than her bank balance), Ms. Winslow places a call to directory assistance...clearly and distinctly asking for American Airlines (or perhaps the writers were trying to atone for the opener of Season 2, when an all-too-similarly named plane - American Eagle - crashed). Notcom 011421.

Jerome Cowan is excellent (and humorous) as shady "business manager" Victor Latimore. He is particularly adept at exploiting the comic potential of the scene in which Latimore finds out that "gangster" Lou Caporale is sitting in his outer office and then tries--unsuccessfully, of course--to toss Caporale out. Submitted by BobH, 24 September 2016.

+"Anybody Can Type." Latimore's employment of his comely "secretary" Doris, and Perry's bemused reaction to her, calls to mind the classic scene in Howard Hawks's "Monkey Business" (1952) where Charles Coburn insists that his secretary, Marilyn Monroe, find someone else to type an important letter. Upon her leaving the room, Coburn turns to Cary Grant, shrugs, and says "Anybody can type." Submitted by BobH, 5 June 2018.

The fair Doris slinks in and out of Latimore's office each time we see her. Was that her big moment? Submitted by Clothears 11th Feb 2020.

So, this episode could've been called "The Case of the Suspect's Shoe" since Lurene Tuttle played both the suspect here and the shoplifter (Ep #166 - TCOT Shoplifter's Shoe") 4 years later. Submitted by Arisia 02/23/18
When Surette enters Allen's house, she leaves the door slightly open. When Caporale is lurking outside the door, it is closed.
+ Maybe "the hand" forgot to pull it closed when she entered :-) Kilo 11/11/2019.

Redundant. And repetitive: In the show's closing remark, Aunt Surette says that she is "...so grateful... and thankful." I'm not sure I see the distinction. Submitted by JohnK, 21 January 2019
> If I was to argue this in writer's court, I would say the former referred to Perry personally, while the latter was for the Fates - thankfully that didn't happen is a commonplace expression, whereas gratefully that didn't happen isn't; that having been said, "grateful...and relieved" might have flowed better. Notcom, 012119.

Sign of the times: Joyce gave Allen the decorative ashtray as a gift. I wonder how many are bestowed as gifts today. Submitted by JohnK, 21 January 2019

+ Tragg told Perry that the porch was "all cleaned up nice" up there. That implies the killer mopped up the blood before it had a chance to seep into the wood. Submitted by Kenmore 9/08/2020

Questions: What happened to Mr. Curtis? Was he shown leniency or charged as an accessory to the murder? Submitted by H. Mason 10/25/14

Did Lt. Tragg really suggest to Perry that it would be easy for a little old lady to get a dead adult male body from an upstairs balcony and down to a car parked in front of the house...because it was downhill all the way?...MikeM. 7/19/2016
Yes, I found that a little bit of a strange explanation. It would be too complicated and she would risk detection. Also, his apartment seemed to be on the second floor, so presumably someone lived below. --yelocab 26DEC18

After Caporale watches Surette drive off, does he not go back to the house and find the body? Hard to believe he'd just shrug and leave himself. Hard to believe that Joyce and Ralph could have done it either, even working together. DOD 08/05/18

William Campbell plays a similar slimy character in “Ill Fated Faker”, only in that one he does, indeed, get away to Mexico. Banks in Mexico City must be very trusting. Apparently they handed over that money without checking identification. DOD 08/19/19