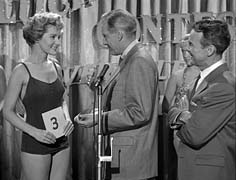 From The Perry Mason TV Show Book
The story begins at a fifties-style beauty contest with a lineup of legs. Marjorie Cluny wins the contest, sponsored by Frank Patton of Stellar Productions. Her prize is a trip to Hollywood and a role in Patton's next picture. But alas, there was "fine print" in Marjorie's contract, and her "career" in Hollywood lasts all of two days. When Patton is found punctured with a woodcarving instrument, Marjorie disappears and becomes the leading suspect. Perry must find out which one of Marjorie's lovers is the real culprit, and clear the "Lucky Legs" winner of the murder charge.

Goof: The door in the jail scene, opened and closed by the matron, has no lock! Submitted by daveb, August 13, 2007.
+ When Perry ties the nylon stocking around Thelma Bell's wrist on the witness stand, he knots it. In the next camera shot, the nylon stocking is simply tied around her wrist, not knotted. jfh 07Aug2018.

The role of Dr. James Latham here is played by Pitt Herbert. Pitt Herbert played the autopsy surgeon, coroner, etc., 16 times on Perry. However he was only given a name twice, here and in episode #179, TCOT Skeleton’s Closet, where he was named Dr. Desmond. Submitted by PaulDrake 33, 9 October 2009.

Normally Mr. Launer is listed in the credits as S. John Launer, but for some reason in this episode the “S.” is omitted. The initial is also omitted in #70, TCOT Spurious Sister. Submitted by gracep, 9/17/2010.

Sightings: As Tragg is testifying, the camera cuts to Perry Mason and his client. Behind them we see a Little Old Lady in a Hat in the gallery. When the hearing reconvenes, a Pencil-Mustached Man sits on the prosecutor’s side, second row. When Burger calls Darby, the Man turns his head; he often does things like that to call attention to himself. (Later, he disappears and his seat is empty). A Quiet Old Man keenly watches from the back row the turn of events. And the Lady moves to prosecutor’s side and sits next to the ubiquitous Distinguished Gentleman #1. Read more about these and other recurring courtroom spectators here in this wiki. Submitted by gracep, 9/17/2010.
+We get to see Steve Carruthers in the gallery throughout the hearing. He actually had a speaking role in TCOT Terrified Typist. Submitted by vgy7ujm on 5 July 2020.

TCOT Mistaken Mustache"? I think the man identified above as Pencil Mustache Man is actually J.R. Bradbury, who does look astonishly like our familiar face. Submitted by JazzBaby, 8/23/2019.

We get quite a treat when court reconvenes the second day. Seated along the back row of the prosecution side are Distinguished Lady #3, Little Old Lady #2 (I think) and Miss Carmody, in addition to the familiar faces mentioned above. Submitted by JazzBaby, 8/23/2019.
+ Our Cute Young Woman appears once again in the gallery, wearing a dress with a white collar. Somehow she shifts from behind the prosecution to behind the defense several times during the hearing. JohnK, 21 January 2019
++ I may be mistaken, but that looks to me like "Distinguished Lady #2" sitting right behind Perry and in front of Little Old Lady in a Hat during the first courtroom scene. I find she is often overlooked. Submitted by JazzBaby, 8/23/2019.
+++ When Miss Fields identifies the defendant as the woman she saw leaving the decedent's apartment, we cut to a shot of Marjorie. Right behind her, slightly out of focus, is our beloved "Miss Carmody". P.s. JohnK, it's nice to see a fellow fan here currently! Well, at least in the same year! Submitted by JazzBaby, 8/23/2019.
++++ "Little Old Lady #2" sits right behind Mr. Burger in the first courtroom scene. Submitted by JazzBaby, 8/23/2919.

Location: About 7 minutes in we see a quick exterior shot of what I believe is Park La Brea Tower Apartments before we go Perry and Della on a studio set of the Holliday Arms. Also see 2 episodes later #81, TCOT Frantic Flyer, where at 17:45 into the episode the Park La Brea Towers double as the Highland Apts. Submitted by Eric Cooper, 5 February 11.
+ The building was also seen in episode 51. That building was used in an establishing shot as the Bromley Towers in New York in the 1957 Bowery Boys movie Spook Chasers. Submitted by H. Mason 12/11/14

The apartments must be very spacious; there are mail slots for just twenty units. DOD 08/20/19

Anomaly: At 17:02, Perry and Della get into an "elevator." But there is no gap between the hotel floor and the "elevator" floor, and the carpet line connects the hotel floor with the floor of the "elevator" (which must be a little room behind the pocket doors). The same is true at 17:40, when they exit the "elevator," and the pocket doors don't even touch the floor. Submitted by 10yearoldfan, 31 July 2012.
This elevator only has one set of doors. Usually elevators have two sets--one inner set for the elevator cabin (that moves up and down with the elevator), and the outer set that closes off the elevator shaft from the room. --yelocab 26DEC18.

Photography: At 47:50 we are treated to quite an unusual and fearsome closeup shot of Perry's face. Submitted by 10yearoldfan, 31 July 2012.

Noir Perry: The victim's darkened apartment, camera near floor-level angled upwards showing the dead body in the foreground with the knife protruding from it, Perry kneeling in the middle ground looking at the knife, with Della standing in the background. The next shot is the same except the camera angle has moved behind Della with Perry still in the middle ground and the body on the floor still with the knife protruding from it. jfh 01Jan2020

Movie: This story was made into a movie released in 1935 with Warren Williams as Perry Mason and Genevieve Tobin as a blonde Della Street. It is available on DVD. Submitted by H. Mason 10/18/14.
+ The movie's cast also included Lyle Talbot and Barton MacLane, both of whom would later appear in the PM TV series, Talbot once and MacLane four times. Submitted by BobH, 25 May 2018.
++ For whatever reason, the setting of the movie was moved from LA to San Francisco, which - of course - actually has a town named Cloverdale to its north (though the movie version seems larger and quite fictionalized). Any possibility of confusion is avoided here, as the town is specified as being in Utah. Submitted by Notcom, 101415.

Fake Della: For the second time a woman made a phone call and said she was Della Street. It also happened in episode 68 TCOT Dubious Bridegroom. Submitted by H. Mason 10/26/14

Say that again This episode will be the first of 20 consecutive alliterative titles, the most the series will have (for those wondering about TCOT Crying Cherub, my dictionary defines alliteration as the same sound or same letter) Submitted by Notcom, 101415.

This is the first of three PM appearances for Lisabeth Hush. She was married to actor Sam Gilman, who appeared in TCOT One-Eyed Witness in 1958..MikeM. 10/26/2016
+ IMHO Lisabeth Hush bears a remarkable resemblance to Glenn Close. jfh 02Jan2017

ESG: "The Case of the Lucky Legs" is Perry Mason novel # 3, published in 1934, but there has been speculation in support of the theory that it was the first novel written, completed in 1931 or at least before the end of prohibition in 1933. Submitted by catyron 11/4/2017

With the exceptions of Rennie McEvoy as Emcee, Arthur Marshall as Art Store Clerk, and Michael Miller as Bob Doray, all the credited actors in the episode have multiple Perry appearances --- some have as many as five! jfh 07Aug2018.

TCOT Glamorous Glasses: In this episode, we see Della and Perry drinking coffee from small glass coffee cups, with what looks to be a General Electric plug-in coffee warmer in the center of the array. This precedes the arrival of the Curious Coffee Set, which first show up in Episode 85. Submitted by catyron, August 7th, 2018

Anomaly: I have not seen anyone comment yet that the "Brent Building," seen in establishing shots just prior to Perry's office door, could not possibly be Perry's building: the Brent Building has vertical exterior framing, but Perry's office has a horizontal balcony that connects to the next office. Submitted by 10yearoldfan, 31 July 2012.

The interior geography of the Brent Building is equally mystifying. When Bradbury leaves Perry's office by the back door, he turns right. Depending on the previous episode, this leads either to another office or the outside wall. DOD 08/06/18

Doreen Lang had a small but memorable role in Hitchcock's "The Birds" as the hysterical mother in the diner. DOD 08/06/18

Not a comment, but a question: can anyone identify the establishing shot of Cloverdale at the very beginning? Ed Zoerner, 05/23/2020

I recently re-read TCOT Lucky Legs. Although it is the third book in the series, copyright 1934, my paperback also has a 1931 copyright. Some have speculated it may have actually been the first PM book ESG wrote. Perry sends Della out of his office when he interviews clients. He keeps critical information from her. His relationship with Paul is more businesslike. In fact, at one point, unbeknownst to Paul, Perry hires another Detective Agency to do supplemental work. Perry and JR Bradbury go to a speakeasy, complete with squinty eyes behind a sliding panel. Prohibition was repealed in 1933, so this supports the 1931 theory. In the book, JR Bradbury is a very smart, powerful man. And, for the later paperback versions of the book, ESG wrote an introduction, inviting the reader to compare the contemporary Perry to this earlier version. Well worth a read. Submitted by Bill-W2XOY on 08/27/13.

Knock on Wood. Since this episode touches on the craft of woodcutting, it should be noted that the largest piece of woodcutting to appear is Bob Doray himself, at least as portrayed by actor Michael Miller. Miller displays anger by clenching his fists and scowling, and displays other emotions--much less frequently--by unclenching his fists and scowling. Submitted by BobH, 30 September 2016.
+ I found Michael Miller's scowling character portrayal impossible to relate to as a "true bridegroom" figure. He seemed to me to be on the verge on verbal and physical violence at all times. Submitted by catyron on 11/17/17.
++ Especially in his first scene, Miller looks remarkably like a young Dennis Hopper. DOD 08/20/19
+++ Though he is not a very good actor, I think part of Mr. Miller's problem is what my grandmother called "an unfortunate face". His brows are very low, very heavy, and very straight, making him look angry all the time, even when doing his best to be subdued, as when on the stand. OLEF641 1/15/21

Della took a shiny black case from Patton's apartment as they were leaving, I didn't see her arrive with that. Maybe something was cut from the syndicated version I watched? --yelocab 26DEC18
+ Mason was carrying the black case when he and Della arrived. JohnK, 21 January 2019
++ It was the case Bradbury left with Perry which contained the documents incriminating Patton. jfh 01Jan2020

Burger has clearly trapped PM, since in fact Mason did see the dead body and failed to report it. (Granted, he saw the police entering, and the police knew he was there, but he still clearly lied.) Before answering for his actions, he unearthed the murderer. But Burger has called him to task in other episodes after the case was over. What was Mason’s defense in this case? Clearly, had he reported the crime to the policeman he wouldn’t have been allowed to leave. jsf 12/13/18
+ Did Perry lie? They told the police officer that they come to see Patton and Della said that no one answered the door---both true statements. I was watching the syndicated version so maybe something was cut. Even if the policeman asked them if they had been in the apartment, they didn't answer the question, which is not lying. --yelocab 26DEC18