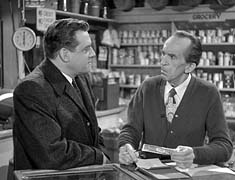 From The Perry Mason TV Show Book
Perry is planning on a relaxing weekend in the Sierra town of Fawnskin, hunting with his old friend Sheriff Gene Norris, but he gets sidetracked into another murder case.

The town is out for blood when Phil Beecher returns from jail. Phil did time for drunken driving and neglience in the car accident that killed Aggie, the sheriff’s daughter. Aggie’s sister Charlotte wants revenge, and frames Phil for robbery. When the scheme backfires, Charlotte herself is killed, and things look pretty grim for Phil. A lynching is a definite possibility before Perry steps in.

Goof: Judith Thurston buys tissues and nosedrops in Robert Tepper’s general store. She picks up the bag and breezily tells Mr. Tepper to charge it to her account even though there is a sign over the cash register in plain sight that says “NO CREDIT - NO CHECKS.” Submitted by PaulDrake 33, 9/24/2008.
+ Actually it reads “NO CHECKS CASHED,” which suggests that checks would be accepted for the amount of purchase, and says nothing about credit. Submitted by gracep, 9/20/2010.
++ Actually, if you look at the photo posted above, you can see the sign behind Perry and Mr. Tepper. It clearly says "NO CREDIT" and just below that is "NO CHECKS CASHED". You can see this scene on the DVD at the 37:31 mark. Submitted by PaulDrake33, 27 November 2011.

Paul Drake, Hamilton Burger, and Arthur Tragg do not appear in this episode. Della appears very briefly talking on the telephone to Perry. Submitted by PaulDrake 33, 9/24/2008.

Goof: Early in the show inside the sawmill office there is a calendar on the wall that displays the months of July and August. Later in the show it is noted that the murder took place on Friday, November 13. That date actually was a Friday in 1959. Submitted by PaulDrake 33, 9/24/2008.
+ The July/August calendar also has the dates for 1959 (July 1 on a Wednesday). Why they didn't use the November/December section is a mystery. Submitted by Wiseguy70005, 7/14/13.

Robert Tepper sells Ritz and Hi Ho crackers in his general store. You can see them behind Perry when Perry first walks into the store. But for some reason all the boxes are displayed upside down. Maybe it’s an attempt to avoid product identification? Submitted by PaulDrake 33, 9/24/2008.

Other products: (1) Kodak film sign outside the store and a display just inside the door. (2) Two Canada Dry signs outside the store. (3) Schlitz sign in the window. Added by H. Mason 10/27/14

In the opening scene during which Phil confronts Kathi, behind her is a reproduction of that iconic Grant Wood painting, American Gothic. Submitted by gracep, 9/20/2010.

For an option to buy land, Mason pays Tepper with a thousand-dollar bill. The Federal Reserve officially discontinued bills larger than $100 as of 14 July 1969; electronic transactions have made them obsolete, and they are too lucrative for counterfeiters. Although still legal tender, if you get your hands on a thousand-dollar bill, you could probably sell it to a collector for far greater than its face value. (Bonus trivia: Which President graces this banknote? Grover Cleveland!) Submitted by gracep, 9/20/2010.
+ $500 bills appear frequently in PM episodes (and sometimes $1,000 bills), worth approx. $4,000 in 2016 dollars. Who carries around that much cash? Of course they usually exist in PM as part of a clue or plot twist. --yelocab 27DEC18

Sightings: Distinguished Lady #4 turns up in the Fawnskin courtroom gallery. Submitted by gracenote, 10/22/2011.

+ Along with William Talman and Ray Collins. Their contracts specified (as most series contracts did and do now) they would be credited whether they appeared or not (unlike Talman's after his return in the 4th season). Although William Hopper's absense is notable, the fact that he is credited is not. This point is especially relevant later in the series when Ray Collins is absent. Submitted by Wiseguy70005, 7/14/13.

Background Cars. Perry walks (!) to the Lumber Yard! As he arrives he passes by:

The nose-badge and paint job of the bus which takes Phil Beecher to Fawnskin might help someone ID the make, model and stageline. Bus Lic No G51 13x, x=0 or 6. Added by Gary Woloski, 7/18/12.

Bus in opening scene: The bus in question is an Aerocoach P-372, built in 1949-1952, a product of the General American Transportation Corporation, based in East Chicago, Indiana. It undoubtedly had a Clark five-speed unsynchronized transmission and probably had an International six-cylinder Red Diamond gasoline engine. [A few of that model had Continental gasoline engines.] It had manual steering and conventional steel-spring suspension. Although the destination sign says "special", the context suggests that the coach was on a regularly scheduled trip on a fixed route. This episode's example has the standard exterior side-panelling (flat & paintable) while the P-372 shown here has the optional Silverside fluted panelling.
The Aerocoach design was a product of William Stout, a well known aeronautical engineer, who had previously created the concepts (among others) which became developed into the Ford Tri-motor aircraft and the PCC streetcar (the most popular US trolley car of all time).
The structure of the Aerocoach consisted of an aluminum skin attached to an aluminum tubular framework, using a technique borrowed from the aircraft-building industry. That accounts for the name Aerocoach.
The production of the Aerocoach ended in 1952 because of falling sales due to the increasing popularity of the competing products from GM, which featured not only diesel engines (introduced in 1939) but also power steering and air suspension (both announced in 1952 and introduced in -53).
The livery (outside color scheme), in red and cream, is one of the standard designs for use by the member companies in the National Trailways trade association. However, no logo, trade name, or legal lettering is discernible. See restoration of a similar Aerocoach P-373 to Pacific Trailways livery here.
Submitted by DocRushing on 24 July 2012.

Store hours: The first time Perry was in the store Mr. Tepper said he closed at 8:00 every night except Saturday. While exiting the store after the land deal there was a sign beside the door that said the store closed at 6:00 daily. Submitted by H. Mason 10/27/14

Recycled newspapers: Beside the door inside Tepper's General Store were old copies of the L.A. Chronicle. On the top row the paper on the left came from episode 33 TCOT Long-Legged Models. Beside it was a paper from #15 TCOT Fan Dancer's Horse. The third paper came from episode 76 TCOT Golden Fraud. Submitted by H. Mason 10/27/14

In the opening scene, where the bus is seen driving into Fawnskin, the place where Beecher is dropped off appears much the same now as it did then. It is still even a bus stop. The town sign and the directional sign (<- Holcomb Valley / North Shore Resorts / Victorville 48 ->) have both been replaced, as has the bridge the bus was seen driving over. The Café seen across the street seems to have been replaced, with a similarly sized building, but many of the trees are recognizable, although bigger, of course. Per Google Maps Street View. OLEF641 2/28/22

Although uncredited, this episode is based, in part, on the 1953 Perry Mason short story "The Case of the Irate Witness". Submitted by Bill-W2XOY on 07/30/2013.

Disappointing Draft: This episode was written by some of our usual writers, and dates back to what many of us think of as the superior early years of Perry Mason, but in my view the story is remarkably weak. And as others mention below, poorly acted. We don't even get much Della. Oh well, they can't all be TCOT Singing Skirt. I gave up on this one early and played the guitar instead. JohnK, 17 September 2021.

Perry, who we've seen fishing in a few episodes, went to "The Angler's Capitol [sic] Of The Sierras" to hunt. Submitted by H. Mason 10/27/14
Good thing Perry packed a suit and tie for a weekend fishing trip. Submitted by Otto Gervaert, 9/17/21.

A Burger without the Ham, Please! Terry Becker's ludicrously over-the-top performance as Prosecutor Everett Ransome makes him eligible for the third season's Robert H. Harris Award for Hammiest Guest Actor. On a positive note, we should be grateful to Becker for making us appreciate how good William Talman was as Hamilton Burger. Submitted by BobH, 15 October 2016.
+ Terry Becker should just keep his other job as Chief Sharkey in Voyage to the Bottom of the Sea. ;-) Submitted by none other than HamBurger 7/4/2018

In his questioning of Mrs Thurston, I was shocked to hear Perry use the grammatically incorrect "comprised of". Anne Rutherford is, of course, remembered best as Scarlett O'Hara's sister Carreen in "Gone With the Wind". She also appeared in several of the Andy Hardy movies. Oddly, the gun is never introduced as evidence, nor, apparently, was a residue test done on Phil Beecher's hands. DOD 08/07/18

This episode is remarkable, I think, in that attitude of the villagers seems to run 180° to the claim made in recent years that Vehicular Homicide, specifically DUI Vehicular Homicide, is - or was - "socially acceptable" (if anything, they seem eager to overassign blame, though the incident is never gone into in much detail). Then again one could argue that the village is supposed to be an anomaly, or that sentiments are different when the victim is well known. Notcom, 111617.

When Tepper went out back and brushed the snow off the logs, the snow really behaved with the consistency of sand. --yelocab 27DEC18
+ Yes. Though all the snow in the location scenes shot outdoors is real, the scene with the logs and the safe was done in a sound stage, necessitating a "stand-in" for snow. OLEF641 1/16/21