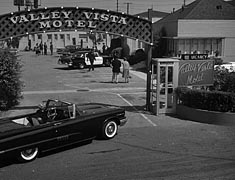 From The Perry Mason TV Show Book
A double cross, a double murder, a plane crash, and $130,000 in missing money lead Perry to yet another widow’s defense. 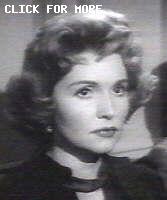 There seem to be a lot of convertibles in this episode. As a matter of fact, when Roger Porter goes to the mountain cabin to wait for Howard Walters, he has the top of his convertible down despite the fact that it is late January, snow and ice are on the ground, and it presently begins to snow. Submitted by PaulDrake 33, 25 August 2009.

Patricia Barry makes her first of three appearances on Perry here playing Janice Atkins. She would also appear in “TCOT Grumbling Grandfather” and “TCOT Velvet Claws.” Each time she would be essentially the same character—a conniving, double-crossing, back-stabbing, untrustworthy female. In “TCOT Velvet Claws,” she even double crosses Perry. Patricia Barry was married for 50 years to the son of Phillip Barry, who wrote The Philadelphia Story (1940). Submitted by PaulDrake 33, 25 August 2009.

Bad Guys Finish Last: While she may have played the nastiest of defendants, Patricia Barry was always gorgeous. She died October 12, 2016 at age 93. JohnK, 16 October 2016

Eight words (Am I? Can I? Isn't he? Why not?) delivered in a coy, yet seductive tone were all it took to become the show's consummate femme fatale; and gorgeous indeed...she was already nearly forty when Frantic Flyer was filmed. Remembered by Notcom, 102916.
+ Patricia Barry is the consummate embodiment of the unpleasant, supposedly seductive women clients Perry defends in the original novels. She was perfect for her role in VELVET CLAWS. I find her "femme fatale" act utterly devoid of appeal, just as I find ESG's depiction of "sexy" women in the books unconvincing. As much as I love ESG, I'm always left wondering what Perry ever found attractive about any of those women. Ditto re Patricia Barry. Plenty of truly sexy bad girls appear on the series, luckily! Submitted by JazzBaby, 8/23/2019.

Two co-stars in this episode, Simon Oakland and Virginia Vincent (who play Mr. and Mrs. Walters) also starred together in the movie I Want to Live! released two years before “TCOT Frantic Flyer” was first broadcast. Submitted by gracenote, 9/21/2010.
+ Among his 158 IMDb credits, SO appeared in TCOT Misguided Missile, 3 IRONSIDEs, 4 Quincys, 5 Hawaii 5-0s & 36 Black Sheep Squadrons. Mike Bedard 7.18.16
Most will remember Oakland as Steve McQeen's boss in "Bullitt". DOD 08/09/18

It's fair to say that many will remember Simon Oakland as the psychiatrist who explains Norman's behavior at the end of the Hitchcock classic "Psycho". Also, Oakland played the perpetually irritated Tony Vinchenzo on the short-lived series "Kolchak". Submitted by Kenmore 6/03/2022

Sightings: Many of our old friends are in the courtoom today (perhaps they couldn’t make it out to the Sierras in the previous episode). Distinguished Gentleman #1 watches from the back row. After some absence, Pencil Mustache Man has graced us with his presence. A bit later we see the Quiet Old Man #1 and the beloved Little Old Lady in a Hat on the prosecutor‘s side, and then they reappear on the defendant’s side when the hearing reconvenes. Read about these and other regulars here. Submitted by gracenote, 9/20/2010.
+It's a full house! The first day in court, "Distinguished Gentleman #2" sits in the front row of the defense side. "Distinguished Lady #2" and "Miss Carmody" sit right behind Janice Atkins. Later, at the Vista Valley Motel, we catch a very brief glimpse of Paul's operative there, who looks like he could very well be "The Thin Man". Submitted by JazzBaby, 8/23/2019.

Uncredited Actors: Don Anderson can be seen scowling as a bailiff. Submitted by gracenote, 9/20/2010.

Location: About 2 and a half minutes into the episode we see a quick shot down Hollywood Blvd. toward the famous corner of Hollywood and Vine. If you look closely you can see the Pantages Theater sign. The Pantages is an art deco theater and has many popular shows. Submitted by Eric Cooper 4 February 11.

Location: The Pantages would also be well known to all of PM's actors too.It would be the location for that year's Academy Awards as it had been for the prior decade. Submitted by Phil A May 23, 2018

Location: About 17:45 into this episode we see an exterior shot of Park La Brea Towers just as we did 2 episodes early in episode #79. This time it doubles for the Highland Apts. Submitted by Eric Cooper, 4 February 2011.

Goof: After 4:34, Ruth Walters is seen driving her husband Howard to the air field. Isn't it a bit unsettling to see the curves in the road wind left and right behind the car while Ruth holds the steering wheel straight? Her car wanders into the oncoming lane, returns to her own side of the road, and then pulls out again to pass another car -- all without Ruth moving the wheel. Submitted by 10yearoldfan, 25 August 2012.

Goof: The beginning of this episode takes place in January which explains the snowfall. Then the episode shifts seven weeks later to March. However, on the wall in the offices of Taylor Maid Markets there is clearly a calendar indicating it is July/August 1959, undoubtedly when the episode was filmed. Moreover, Perry Mason's office calendar states it is Tuesday, March 16, which places the events in either 1954 or 1965, but NOT 1959! Submitted by Wiseguy70005, 5/25/13.
+ Caught My Eye: Is there a partner in the business named "Maid"? I wonder why the writers chose that spelling rather than the more obvious "Made" to mimic the idea of custom tailored investments, etc. jfh 22Aug2019.

Shank's Pony: When Howard comes to in Zack Davis's cabin, the prospector tells Howard that the only way out before the spring thaw is "Shank's Pony", meaning "on your own two legs". jfh 22Aug2019.

The ubiquitous Bernard Herrmann-composed music from the pilot episode of The Twilight Zone, "Where Is Everybody?" pops up again in this episode at 7:37 and 8:05 while Walters descends in the parachute. Immediately after, when Walters lands through the scene where it begins snowing (and again at the end of the courtroom scene after Perry unmasks the killer), stock music from The Twilight Zone episode "The Hitchhiker" can be heard. Much of this music was also composed by Herrmann for the radio broadcasts of "The Hitchhiker" in the 1940s. Submitted by Wiseguy70005, 5/25/13.

Merced Airport answers the distress call. Howard Walters tells them his flight plan was Fresno to Portland....MikeM. 7/22/2016 + Tonopah or Bust !!(he got the bust) Not sure if it falls to the level of "goof" or not, but Walters' route is hardly what would be expected for a Fresno-Portland trip, one which would logically follow the Central Valley, NOT veer over the Sierras (and deep enough into them to encounter months-long snow cover). Of course as viewers we understand the reason, but in reality investigators would be puzzled...it not suspicious...Notcom, 11/22/17.

This is the third of three PM appearances for Virginia Vincent, who played Betty on thirteen episodes of The Joey Bishop Show sitcom...MikeM. 10/28/2016

This is the third of four PM writing credits for Robert Bloomfield...MikeM. 7/28/2017

James Bell, as Zack Davis, plays almost the same character as he did in episode 35, “TCOT Lazy Lover.” He is a hermit who takes in an injuried character and nurses him back to health. Submitted by PaulDrake 33, 25 August 2009.

+ When we see Zack Davis at the motel in the Big City, at about 30 minutes in on the MeTV broadcast, he's wearing his High Sierra outfit, with a plaid wool jacket, wool hat, and knee-high boots. Seeing as it was after the big Spring thaw, a mountain man such as him must have been uncomfortably warm in the lower latitudes. JohnK, 5 October 2022

The music score under the opening scene at the safe is clearly lifted from Alfred Hitchcock’s film Vertigo. submitted by Kenmore, 6/15/2010.

In many episodes, police identification of the deceased is surprisingly casual. This is the only episode I recall that uses dental records to ID a corpse. DOD 08/22/19

Eight minutes into the episode, the plane that crashes is clearly different from the plane that was flying -- different identification number, paint job, wing tips, etc. Simon Oakland looks much skinnier bailing out (with a different style parachute) than he does before and after while on the ground. Not that I blame him for any of this. I'd also be tempted to play the sap for Patricia Barry. Submitted by masonite, 7/10/2012.
+ On a humorous note, Howard's zipper is down mid jump. But he must have felt a draft and zipped up. When he hit the ground he was all proper again. Kilo 11/14/2019.

For a change of pace, our court clerk, George E. Stone, speaks a few lines. It is a shame that he was not given a chance to do more, but perhaps his health prevented? Submitted by gracenote, 9/21/2010.

Tragg's Car. Based solely on what is visible in this episode, it is not possible to conclude that Car(5) is Tragg's cruiser; and it's only possible to recognize the car as an Electra 225 if one knows to look for the horizontally-ribbed, two-piece "Beauty-Panel" across the back of the car just above the rear bumper (non-225 here). However, considering that there's an investigation at the motel and the other appearances of the '59 Electra 225 with Tragg in Episodes 74, 77, 78 and 97, it's a good bet that the same 1959 Buick Electra 225 4-Door HardTop, Lic No SFH 107, was scripted as Tragg's car for this episode #81. A summary of the many appearances of the 1959 and 1960 Buicks in this Season 3 follows in the Comments section of ep#94. Submitted by Gary Woloski, 23 Aug 2012.

Roger is identified as Carol's cousin twice in this episode but nothing seems to come of this relationship. Roger doesn't seem to have any qualms about planting the money in Carol's home although being her cousin might give him access. Carol's reaction to Roger being accused of murder in the courtroom by Janice is not even shown. Submitted by Wiseguy70005, 5/25/13.

There is no explanation as to why the judge calls an early recess. This gives Perry an opportunity to investigate the occupant of Unit 9. (Notice also the disguised Coca-Cola machine outside Unit 9!) Submitted by Wiseguy70005, 5/25/13.

This episode has always struck me as the most noirish of many - Patricia Barry alone, and then Simon Oakland, almost always mean somebody's gonna get double crossed and likely killed in the bargain ... and Rebecca Welles isn't always the most innocent in the room - and the fact that the 'Taylor boy' is the not-quite-burned-up body in the crashed airplane adds to the backstabbing goings on. I just never expected the 'old prospector', played by James Bell, to be the killer - oh, I suspected he was dirty from the time he found Oakland's 'Howard Walters' in the woods, but not the ONE. And can I throw a shout out for Virginia Vincent? I think she's kinda cute - and she always seems to be stuck playing the drab little wife characters! Submitted by MikeReese, 9/7/2012.

Help Wanted: Mr. Taylor needed to call an employment agency. Three positions needed to be filled in his company. Submitted by H. Mason 10/27/14