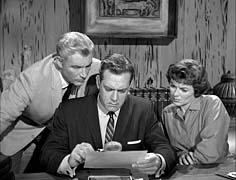 From The Perry Mason TV Show Book
Wealthy but crippled rancher John Brant forecloses on Jo Ann Blanchard’s mortgage and takes possession of her prize horse. Jo Ann goes to Perry for help; first, in getting the horse back, and second, when she’s arrested for killing the rancher.

Although the murder was set up to look as if the horse killed Brant, a bloody jack handle was found in Jo Ann’s car. Perry digs into the case and the deeper he goes, the stranger it gets.

However, nothing is as strange as the ending scene: Jo Ann, ever so grateful to Perry for getting her off, confesses that she cannot afford to pay him. Unmiffed, Perry simply says: “That’s OK.” Where can you find a lawyer like this today? 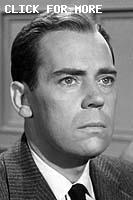 Pendant alert!! Della once again wears her pendant with the letters D S written in script. Submitted by PaulDrake 33, 29 August 2008.

In a couple of scenes Paul wears a very dark suit coat—something that is rare for the private detective that perfers light-colored coats. Submitted by PaulDrake 33, 29 August 2008.
+ And Perry prefers the Reverse, as Evidenced in the picture above. Mike Bedard 7.11.16.//

What’s with all the H’s in this episode? Cast members include Hal Hopper, Holly Harris, Howard Hoffman, Arthur Hanson, John Harmon, and Patricia Hardy. Someone must have told the casting director to go to H. Submitted by PaulDrake 33, 8 October 2009.

Sightings: A recurring courtroom spectator, known here as Quiet Old Man #1, sits…uh…quietly on the defendant’s side. Distinguished Gentleman #1 is more difficult to see as he is either blurry or partially obscured by other actors, but he is also on the defendant’s side. He reappears the next day on the prosecutor’s side. Who are these recurring courtroom spectators? Submitted by gracep, 9/11/2010.
+ “Miss Carmody” is seated behind Clara Hammon during courtroom closeups. Submitted by alan_sings, 3 Oct 2010.
+ Quiet Old Man #2 appears behind Burger in the latter part of the hearing. Submitted by gracenote, 8/30/2011.

Uncredited Actors: Robert Wegner appears as a courtroom spectator. Scowling as usual at first, he actually smiles at a joke Burger makes at Mason’s expense. Submitted by gracenote, 8/30/2011.

Actor Paul Richards has not only appeared twice on Perry Mason, he also has appeared on The New Perry Mason and, in his last acting role, on Ironside. How many other actors have appeared in all three series? (Ones that comes to mind are Mary Ann Mobley, who was also in two episodes of Perry Mason and one each of the other series; and Carl Betz who appeared in one episode of each. Carl Betz also appeared (his last role) in Kingston: Confidential, Raymond Burr's third TV series!) Submitted by Wiseguy70005, 5/12/13.

Court case: The credits listed Morris Ankrum as Trial Judge. The court scenes were supposed to be a preliminary hearing. There is a difference between a hearing and a trial. Submitted by H. Mason 10/24/14

CBS/Paramount seems to have had an itchy trigger finger in the presentation of this episode on the season set. The audio of both the opening and closing themes fade out before they should and even the old "CBS Television Network" logo at the end is cut off before it's finished. Submitted by Wiseguy70005, 10/27/14.

Visible Crew: At approximately 25:45, Paul is entering Perry's office through the side door. Perry closes the door after Paul enters, but a crew member's hand and arm are visible through the closing doorway just before the door closes, most likely reaching for the outer knob to pull the door closed. A very similar event occurred in Episode #30 TCOT Screaming Woman. Submitted by Dan K, 12/27/15.
+ Ditto at 7:10 when Perry enters by himself. Submitted by Kilo 7/12/2017.
+ See Episode #4 TCOT Drowning Duck for another example. Added by Dan K, 7/14/16.

This is the only PM appearance for Elliot Reid (Terry Blanchard), who was born in New York City in 1920. Starting on stage and radio, Reid transitioned to movies and television. In a 1955 episode of "I Love Lucy" Reid portrayed an Edward R. Murrow type character who interviewed the Ricardos on live TV from a remote location. Elliot Reid passed in 2013 at the age of 93...MikeM. 7/31/2018

Reid is best remembered as the detective who falls for Jane Russell in 'Gentlemen Prefer Blondes' .

Little Church of the West is an actual venue, which shouldn't be a surprise as a(n actual) neon sign was shown (and would have been too costly to create just for a 2 second shot). Nor is it a surprise, I fear, that a thoroughly unconvincing set was used for the exterior. What might be a surprise, tho, is that it allowed its name to be used, as it can be implied that it would be party to a fraud...albeit unknowingly. Notcom 090921.

Regarding the remarks in the summary, above: In the first place, Miss Blanchard didn’t say she couldn’t pay Perry; she said the horse Spin Drift couldn’t, and there was no implication that she had not paid Perry for his service to her. It seems more likely that Perry was brushing off the laughable idea of getting a fee from the horse, too. Secondly, in lieu of the horse not paying, she gives Perry the title to his first foal and box seats to a race, so Mason is hardly working pro bono, for either Blanchard or her prize colt. (Still, what lawyer would give his client a gift ”to remember us by,” which is what he did at the beginning of the scene?) Submitted by gracep, 9/11/2010.
+I have made many thank you gifts from lawyers to clients over the years. Usually it involves millions of dollars though. Submitted by BeadsOBleach 4/30/22

At 2:15 and again at 2:26 into the episode, when Clara Hammon is driving Earl Maulden away from their fake wedding, it's amusing to watch the street scene out the rear window: the car turns each corner long before she turns the steering wheel. Submitted by 10yearoldfan, 2 July 2012.

In the summary Perry says Terry faces jail time, but on what charge? He knew about the fake marriage, but did not facilitate it. Other than being a bum, just what crime did he commit? DOD 08/13/19

Mis-matched Prop Selection. In court Tragg presents a casting of a tire imprint (DVD 32:30) that he claims was made by "the Left Front wheel of Mrs Blanchard's station wagon" (Car2). As can be seen on Jo Ann's car earlier, its tires are standard passenger-car size 7.10-15. Tragg's casting indicates a heavily lugged, wide tire like that from a farmer's pickup truck or a large passenger car's snow tire. I suspect the prop was made for an earlier episode. Added by Gary Woloski 8/3/12.

Bad Luck for Mauldin: When Perry visits Carmel to question Earl Mauldin, the actor is rehearsing Shakespeare, and tells Perry the scene is from Macbeth. Well, actors are a superstitious lot and consider it bad luck to use that title, referring to it instead as "the Scottish play." Submitted by francis, 7/30/14.

The Winner of the Rollin Hand Award: Earl Mauldin (played by Paul Richards) wins the Rollin Hand Award for 1959, even though Hand did not come on the TV scene until almost a decade later. Not only does Mauldin closely resemble John Brant in his impersonation of Brant, he literally becomes Brant in his original "wedding day" impersonation and, later, in his surprise courtroom appearance. Congratulations should be extended to the show's production crew for this anticipatory "Mission: Improbable"-style transformation of one actor (Paul Richards) into another (Trevor Bardette) and back again. Submitted by BobH, 13 July 2016.
+This episode aired again on MeTV on 19Jul2017, four days after the death of Martin Landau. jfh 19Jul2017.

+The Two Faces of Trevor Bardette. Actor Trevor Bardette actually appears as two characters in this episode: as murder victim John Brant and as Earl Mauldin, disguised as John Brant on his "wedding day" and during his later courtroom impersonation. As far as I'm aware, this later "impersonation" makes Bardette one of only three actors in series history--the others being Maurice Manson and Philip Ober in Episode #s 50 and 210--to appear as another character after the character he's playing has been bumped off. Submitted by BobH, 10 September 2016.