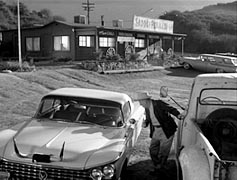 From The Perry Mason TV Show Book
This is the unique episode where Lt. Tragg is surprised to see Mason and Burger working on the same side.

While on vacation, Hamilton Burger introduces his fellow duck-hunters to Jeff Pike, an old friend who saved his life in a boating accident twelve years before. Now Jeff is in trouble and wants Hamilton's advice. Jeff and his son are at odds with a man who is later murdered. Since the L.A. District Attorney's office has jurisdiction, Hamilton disqualifies himself and asks Perry to defend his friend.

Location: “I believe the opening scene here is at the corner of Kanan Rd. and Agoura Rd. in the parking lot of a place called Whizins.” Submitted by Mitch English, 10/2/2005.
+ Google map here. This is in Agoura Hills, CA. There was a Whizins restaurant at “Cornell Corners” near the time of the series. Today, the Whizins Shopping Center is located northeast of the intersection of Cornell Road and Agoura Road. This is about a mile east of Kanan Road. Submitted by daveb, 18 December 2007.

Location: I, too, thought the opening scene was Whizzins until I bought the DVD and on the cleaner, clearer copy saw the “Saddle Peak Lodge” sign. I’ve eaten at the Saddle Peak several times. It has gone from the roadside BBQ you see in this episode to five-star fine dining. It has a history with Hollywood types all the way back to Clark Gable. It’s only a few miles from Malibou Lake which is a favorite location for Perry Mason episodes. For more information on the history of Saddle Peak Lodge go to their site here. Submitted by Eric Cooper, 2 September 2010. Some pictures here.

This is the only episode where Paul Drake does not appear. William Hopper appeared in 270 of the 271 episodes, more than any other person, even Perry himself. Submitted by PaulDrake33, 6/24/2008.
+ IMDB is totally incorrect. They are just automatically listing the three main stars as being in all of the 271 episodes. But, as we all know, all three of them have missed appearing in various episodes. I don't know why they did this when they list an accurate number of episodes for both Burger and Tragg. Someone was obviously very lazy :p Submitted by Arisia, 02/16/2018.
+ My records, and a quick check, show that Paul Drake did not appear in #80, “The Case of the Violent Village,” either. Submitted by daveb, 6/24/2008.
+ Jim on the Perry_Mason Yahoo! group notes that Paul also was missing from #219, “The Case of a Place Called Midnight,“ as well. Submitted by daveb, 9/8/2010.
++ Perhaps IMDb is counting credited episodes.

We get a shot of Denver Leonard’s car registration in the opening scene. For a change, the address is not that of a studio. More here. Submitted by daveb, 9/8/2010.
+ Another non-studio address also appeared in Ep#9, in which the address for John Addison shown on the registration for his '57 Continental MkII was a real residential address on Cheviot Drive, LA (see Murder Date under Trivia ep#9). Also:

+ Denver Leonard’s same 59 Buick Convertible, but without bull horns, appears again in an LA restaurant parking lot in Ep#86 TCOT Mythical Monkeys: Perry reads the Registration Form and finds the same Lic No NFL 252 registered to "Richard Gilman", resident at "350 Sierra Rd.", the same address as Denver Leonard in this episode #83! Also, in ep#86 the car is still a "Convertable" (see here again), but its engine has been switched for Engine No Xy547769! It also cost $48.50 for Gilman to register his Buick. See Comment below. Submitted by Gary Woloski, 27 June 2012.

Sightings: Courtroom regulars Little Old Lady in a Hat and Quiet Old Man #1 sit on the prosecutor’s side, although they are most easily seen when court adjourns. When the hearing reconvenes, they are gone, but Distinguished Lady #2 fidgets quite a bit in the second row. Read about these and other recurring spectators here. Submitted by gracenote, 9/24/2010.
+ Almost missed one! Distinguished Gentleman #1 hides behind another spectator in the first part of the hearing, but if you look carefully you can see the tiniest bit of his face. (And in the second part, the Little Old Lady reappears, too, peeking between other spectators’ heads, though you can scarcely see her.) Submitted by gracenote, 9/25/2010.
+ Room for one more! The aforementioned Gentleman #1 serves at the concession stand behind Perry and Della as they talk with Ruta Lee. He brings them coffee to their table, too. Submitted by gracenote, 11/12/2011.
+ Also in the front row of the gallery (prosecutor’s side) is the Cute Young Lady. In the back row on Perry’s side, sitting right next to spectator Hamilton Burger, is Little Old Lady #2. Submitted by gracenote, 11/26/2011.
+ Room for one last addition as Miss Carmody watches from the front row behind the Prosecutor. Submitted by Bill767, 10/31/15.
+ Distinguished Gentleman #1 is Rudolph Salinger. He was credited in #112 TCOT The Wintry Wife as "Chemist" and in at least two other episodes he played non-speaking characters who were addressed as "Rudy," the actor's real name. Submitted by catyron, January 31, 2021.

Character Names: Michael Fox’s character, listed as Autopsy Surgeon, is called Dr. Hoxie. Dennis Patrick’s character, listed merely as Prosecutor, is called Darryl Teshman. John Alonzo’s character’s first name is Pedro. Submitted by gracenote, 9/25/2010.
+ I, too, would have gone with the Darryl spelling but the closed-captioning on the CBS/Paramount DVD gives the spelling as Darrel. Not being familiar with this spelling I looked it up in a baby book of names and the name was listed under Darrel with all other spellings such as Daryl and Darryl listed as variants. Submitted by Wiseguy70005, 11/10/13.

CARS, in order of appearance:

Burger drives the '59 LeSabre Sedan here but in Ep#85, TCOT Wary Wildcatter, it belongs to fraudster Charles Huston. Perhaps the D.A. imprudently traded his car for a dubious oil well investment & got taken for a ride! Submitted by Gary Woloski, 22 Jun 2012.

So Burger has been a hunter for at least 12 years according to this episode. However, in episode 3, "The Nervous Accomplice," aired only two years before, Burger didn't recognize a shooting stand calling it "that...whatever it is." Submitted by Wiseguy70005, 1/20/15.

This is the first of two PM directing credits for Robert Ellis Miller, who directed 21 episodes of The Donna Reed Show...MikeM. 11/1/2016

The priceless moment in the show is when Hamilton Burger mutters under his breath (but not so quietly that we can't hear it!) in response to Dennis Patrick's 'Prosecutor's' objections, "Shut up, you fool!" (From memory, not verbatim) And Dennis Patrick? I almost expected HIM to be found guilty! Submitted by MikeReese, 9 September 2012.
+ Actually Burger says, "Oh sit down be quiet". Submitted by HamBurger, 7/27/2014

That was a priceless moment, but another priceless moment was when Ruta Lee walked in to tell lies to Perry and Della in her skating outfit! She looks like a million bucks (actually $50,000!) in her short skirt and tight top! She puts the "figure" in "figure skating!" I imagine her outfit is a nice shade of peach. And when she testifies the first time, she keeps her mink coat on like it's freezing in the courtroom. Submitted by DyNama, 10/8/2014

Malibu or Malibou: It's interesting to note that when describing the community, it is spelled "Malibu" however when talking about the lake it is spelled "Malibou". Submitted by by HamBurger July 27, 2014, at 10:57 AM
+ MaliBOU Lake and MaliBOU Dam are located in MaliBU Creek State Park. Wikipedia suggests that MaliBOU is an Anglicized version of MaliBU...MikeM. 7/26/2016
++ Actually, neither is. Both are private property. And, interestingly enough, Malibu Creek ends (begins?) at the dam; upstream of that point the valley is called Triunfo Canyon. I used to be a docent at MCSP, which is where I learned about this. Another interesting fact about the lake: it is so full of sediment that it is only about five feet deep in most places! OLEF641 12/21/21

My Apologies to the Crew for being so PICKY! (Trivia, lic plates & Registrations) The apparent connections and anomalies on Car Registrations, Licence Plates, cheques, newspapers, envelopes & other props in the series might be due to deliberate prankishness by the Production Crew but perhaps some anomalies just resulted from the pressure of the Production Schedule. They probably weren't concerned that pesky People from the Future would give their work such close scrutiny aided by slo-mo and stop-action Home Video Players. I realise that it's not fair to them for me to do that. However, the rich detail that they put into every episode is a major part of the attraction of the Series for me and I simply can't resist looking at it! Submitted by Gary Woloski, 27 June 2012.
+It is appreciated, Gary. I look forward to reading the nits you and the others pick after each episode. Thanks for your efforts. Submitted by Vladimir-Estragon-of-the-Future, 24 Nov 2049.

Courtroom confession: This episode has IMHO the best/funniest confession outburst (I won't say who!). "I killed Leonard...I killed the BIG GAS BAG"!!! LOL! I play it back several times each time I see it! Submitted by mesave31, 10/21/14 The "big gas bag" that quoted a line from "The Rime of the Ancient Mariner". Joe B. 04/28/2022

Dennis Patrick makes his second of four appearances on PM to play the prosecutor in this episode but with pointed nose and smiling sneer he always comes across and often plays the bad guy. He was especially devious in TCOT Golfer's Gambit later. Submitted by Perry Baby 5/2/15
+ There's no truth to the rumor that, through force of habit, Dennis Patrick's character was bumped off at the end of the episode. Submitted by BobH, 15 October 2016. Dabbs Greer has a similar angry outburst in several of his eight PM appearances.Joe B. 04/28/2022