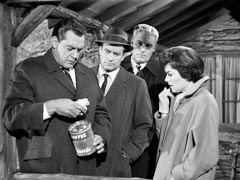 From The Perry Mason TV Show Book
Mauvis Meade, author of the bestseller Chop the Man Down, sends her secretary out to a mountain cabin to pick up a package. Gladys gets lost and her car is stuck in the mud. She walks to a cabin looking for help and meets a mysterious man who seems to know her. While Gladys freshens up, the man leaves and Gladys finds--a dead body.

Perry has to find the mystery man in the cabin in order to clear Gladys, but several things are working against him. First of all, the cabin was rented in Gladys's name. And second, it appears that Gladys was unknowingly working as a courier for the underworld.

Louise Fletcher, one of the stars of the award-winning film One Flew Over the Cuckoo's Nest, plays Gladys the secretary; Trekkies will also know her as the ethically challenged Kai Winn on Star Trek: Deep Space Nine. Also, watch for Norman Fell, who starred as the jerky landlord on "Three's Company," as Casper Pedley.

+This is Joan Banks’ (Mrs. Manley) third appearance on Perry, (TCOT Negligent Nymph, and Fancy Figures previously) and for the third time she plays the wife of the murder victim. The difference this time is that she is not an alcoholic. Submitted by PaulDrake 33.
+ "Left-Handed Liar"& "Woeful Widower" were her 2 other Perry appearances. Mike Bedard 7.28.16
+ She was in all 4 of those mentioned episodes above including this one for five in all. The real question is was she an alcoholic in all 4 other episodes? HamBurger 7/29/2016

Location: About 10.5 minutes in we see a quick shot of Parker Center, 150 N. Los Angeles Street, before they cut to Tragg inside. Submitted by Eric Cooper 23 September 10.

+ Another continuity error involving Mason and Mauvis shows Mason sitting then standing during their conversation. After standing, a brief close-up of Mason listening to Mauvis (@ 19:12) shows him again sitting. The shot which immediately follows shows him standing again. Submitted by Wiseguy70005, 2/10/15.

++ Perhaps related to the continuity errors - or not - I found this episode to have a number of instances of curious filming: the picture going from a distance shot to a close-up, but for no obvious reason...not a (deliberate) zoom shot, but more like the camera had been improperly placed and some foreground object ended up in the way. Wondering, Notcom 011120.

Dead Ringer: The corpse that Gladys glimpses in the darkened cabin appears to be the same actor who also portrays the crooked lawyer, "Gregory Dunkirk", in that same episode (with the addition of a disguising mustache). Submitted by cspoleta, 11/24/17

Sightings: (and Continuity Error) Several recurring spectators appear in the courtroom gallery. Behind Caspar Pedley, the Little Old Lady in a Hat peeks out at the proceedings, but she disappears in the middle of the trial. Two seats down from her sits a Quiet Old Man, although he ends up in different seats throughout the hearing. A Cute Young Lady looks on with interest, and Distinguished Lady #2 acts very surprised by certain revelations. Submitted by gracep 9/30/2010.
+ In court, we also find Miss Carmody in the back row and Little Old Lady #2 in the front with a hat. Submitted by Bill767, 10/31/15.

The (notional) "restaurant parking lot" is the General Service Studios parking lot so some background cars are probably owned by Studio employees. Added by Gary Woloski, 6/29/12.

Gilman's Registration Form. Perry checks out the ownership of the cars in the restaurant parking lot. The Registration form of the Buick Convertible is shown at 39:46 (CBS/Paramount DVD):

Look! The last line is overprinted with "Denver Leonard"! Compare to Denver Leonard's registration from ep#83 here. The Buick is certainly the same one in both episodes but the cockeyed bull horns from Ep#83 have been discarded for this ep. Added by Gary Woloski, 6/30/12.
+ Instead of "Denver Leonard" being overprinted, it appears a new label with some of the same info has been pasted over the original. [The address number, although the same as the original, is typed further above the line than in the original.] Unfortunately, the new label comes up a bit short (Richard Gilman's name is a bit cut off) and doesn't completely cover the old label. Submitted by Wiseguy70005, 2/10/15.

Costumes: Note that Mason wears rounded club collars for the first 26 minutes of this episode. But while visiting the cabin, he wears his usual button-down collar, which he still wears in the next scene. Then, when he appears in court at 30:18, he is again wearing a rounded club collar, which he keeps for the rest of the episode. Submitted by 10yearoldfan, 22 Sept 2012.

Closed-Caption Anomaly: After Dunkirk hands Mauvis' keys back to her, they jingle in her hand. At 6:52 the closed-captioning on the CBS/Paramount season set reads "coins jingle" although she is holding no coins. Submitted by Wiseguy70005, 2/10/15.

Brilliant Deduction on the part of Perry Mason. Looking up at the coffee can (@ 28:30) he remarks "This looks like a coffee can." Since the only visible word on the can is "coffee" (written four times) one can only wonder how he came up with that reasoning. Submitted by Wiseguy70005, 2/10/15.

In the novel Perry enters the cabin to look around and later finds the coffee can under the house. To expedite matters in the episode he doesn't enter the cabin and "finds" the can (already being told where it was) under the roof. Submitted by Wiseguy70005, 2/10/15.

This is the first of two PM directing credits for Gerald Mayer, who was the nephew of Louis B. Mayer...MikeM. 11/4/2016

This is the only PM appearance for Beverly Garland, who also appeared in a single episode of "The New Perry Mason" television series in 1973...MikeM. 8/4/2017

It is rather amusing how offended Burger seems at the idea of the cabin being used as a “love nest.” His reaction, a whispered “Really!” is almost Victorian. Submitted by gracep 9/30/2010.

Hamilton says they found the fire "already lighted". Isn't the correct term "already lit"? HamBurger 7/29/2016
+ Probably both are correct but lit is preferred. https://writingexplained.org/lighted-vs-lit-difference Submitted by Kilo 5/18/2018.
>> And, as noted (above), even if Hamilton wasn't an expert on being "already lit", William Talman was... Ca-ching!! by Notcom 051818.

Mm..mm..good!! Mythical Monkies with Mauvis Meade: was PM angling to have Campbell's soup become a sponsor ?? Queried by Notcom, 112517.

Perry, or rather Raymond Burr sounds a bit hoarse in the throat, like his in the throes of a cold of flu. He still sounds hoarse in at least one scene of the following episode. [unsigned]
+ Raymond Burr certainly does seem to have a bad cold and a stuffed up nose in this episode. I wonder if having to shoot around him being sick is what led to the uncharacteristic number of continuity errors, especially in the Perry / Mauvis scene, which seems to consist of two quite different takes or set-ups badly grafted together. Submitted by catyron, February 4th, 2021.

In the scene with Gladys in Perry's office, Perry gives Tragg somewhat detailed directions to the cabin over the phone. Tragg must have a good memory because he doesn't write them down. Later in the scene, Paul enters the office. Perry tells Paul to have one of his operatives check on the cabin, but he doesn't give Paul any of the details on how to find it. [unsigned]

When Perry is in the parking lot talking to the attendant the shadow of the boom mic can be seen on the ground. Kilo 5/5/2021.

Perry hands Gilman a subpoena when he confronts him in the parking lot. Where did this subpoena come from? Perry must carry blank subpoenas with him just in case. Kilo 5/5/2021.

Question: Who do you think made the Monkey scarf? What do you think happened to it? As a new PM fan, I'm fascinated by the idea of the special props taking a starring role. PMSisters 11/23/2021

How Many Murders?: In how many episodes was Joan Banks not only the wife but also the murderer? This episode, and "Negligent Nymph" for sure. Does anyone remember who the murderer was in the other 3 episodes? Is there a page, either on this blog or elsewhere, where the names of the murderers are listed? Submitted by cspoleta, 11/25/17.