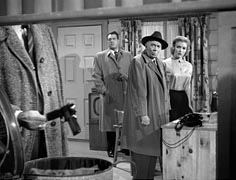 From The Perry Mason TV Show Book (Revised)
An episode with good shots of the street hustle and bustle of the fifties, but also troubling for how easily men could abuse the women who worked for them during this period, especially in entertainment.

The Big Barn is a legal gambling casino where "everybody is happy" under the orders of the big boss and laughing boy George Anclitas. That is, until second banana Slim Marcus botches a crooked card game and is exposed for cheating.

When Slim's girlfriend is killed, Anclitas plants a gun and marijuana on Betty Roberts, one of the "skirts" that works for him. Betty knows too much and Anclitas wants to use her to take the heat off his club and his "boys." Perry takes Betty under his wing and goes to great lengths to put the real criminal where he belongs. 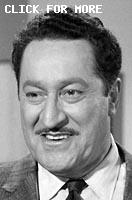 This show would air on Saturday night, 12 March 1960. Later on that night, (actually in the early hours of 13 March 1960), William Talman would be arrested by Los Angeles police. Reports were that he was involved in some sort of sex and marijuana party, and that he was found in the nude. The charges were later dropped, but because of the adverse publicity it would be almost a year before he would appear on the Perry Mason show again. Submitted by PaulDrake 33, 5 May 2009.

Character Names: George Anclitus addresses Chris Warfield’s character as Manning Ennis III—the name suffix is omitted in the credits (and he signs his checks wihtout it). Submitted by GraceP, 9/30/2010.

Sightings: In the gallery, Quiet Old Man #1 moves his head in the shot just as Burger whispers to Tragg. The Little Old Lady in a Hat never quite comes into focus, but she is intently watching from the back row. Read about all the courtroom regulars here. Submitted by GraceP, 9/30/2010.
+ We see Miss Carmody sitting next to Little Old Lady in the Hat and Distinguished Lady #4 next to the Quiet Old Man. Submitted by Bill767, 10/31/15.

In this episode, Perry mentions that certain types of gambling are legal in the City of Rowena. Was there a complaint about an earlier episode? In “The Case of the Dangerous Dowager” (episode #65), Perry says that some card gambling games are legal in the City of Gardena. This was and is true; Gardena was issued the first legal card club license in the State of California in 1936, and card gambling, with some restrictions, is legal in Gardena to this day. In this episode, draw poker is legal, but stud poker is illegal in the City of Rowena, which is an entirely fictional place. Submitted by Fifty Niner on 4/9/2011.

CARS. (1) Perry's black 1959 Ford Fairlane 500 Galaxie Skyliner, retractable hardtop down, Lic No RTS 277. Have a good look around the car with the linked set of images.

The headlights are a dead give-away for the car switch 2A→2B, the '60 pairs being horizontal and the '59 pairs being slanted. See CARS Ep#6 for an earlier occurrence of the car-switching phenomenon. I believe that Car2A is the first 1960 model-year car appearing in the series. Added by Gary Woloski, 7/5/12.

Switching guns: This was the third and final story where guns were exchanged. It also happened in episodes 1 and 33. Submitted by H. Mason 9/27/14

Pay phone: Watch Paul call Perry's office from the phone booth. It looked like he dialed the number MA 5-1190. In several other stories one of the characters really dialed the phone number mentioned in the script. Submitted by H. Mason 10/29/14

Closed-Caption anomalies: @ 16:25, when Perry tells Paul to take the gun to Halstead, the name is spelled correctly. @28:29 it is incorrectly spelled as 'Holstead.' Later during Halstead's testimony it is again spelled correctly. @16:36 when Paul remarks about Betty's antagonizing the powers that be at Rowena he says "That's not too smart." In the closed-captions "too" is spelled "to." The possessive form of Anclitas is mentioned @47:30 and 47:37. The first time it is written correctly (as Anclitas') but the second time incorrectly (as Anclita"). Submitted by Wiseguy70005, 3/04/15.

Joan O'Brien's Wikipedia page has a nice photo of Joan and Raymond Burr from this episode. According to Wiki, Joan turned 80 this year...MikeM. 8/1/2016

One of the episodes where Burger tries to get Perry to "take the stand" and Perry has stalling tactics and points of order up his sleeve in order to NOT testify. Submitted by HamBurger 7/15/2018

This show features two different scenes inside Perry's law library. Della is shown opening the safe inside the library. Submitted by PaulDrake 33.

Anomaly: The law library is supposed to be located stage left of Mason's desk. At 14:09, the scene is shot from the law library, and you can see through the door the picture that hangs behind the desk. But the picture seems to slant down to stage left. From the law office, the picture should seem to slant down to stage right. I think the "law office" was set outside the door that usually leads to Gertie's office. Submitted by 10yearoldfan, 6 Sept 2012.

Anomaly: Also, in the same shot through the door at 14:09, you can see two lamps that hang from the ceiling stage right of the desk, which had been glimpsed at 14:05. These lamps are seldom included in office shots, perhaps because of the very dark shadows illogically behind them on the wall--shadows cast by very bright set lights offstage left. Submitted by 10yearoldfan, 6 Sept 2012.

Anomaly Redux In fact, when Perry and Della return to his office from the law library, they do so through the door to the right of the main door to the office, not the one to the left, as we would expect. The details above about what we can see in the shot from inside the law library, while well-observed, are superfluous. We actually see our stars exit through the "wrong" door. Submitted by JazzBaby, 8/25/2019.

Was it just a coincidence that this episode had marijuana being "planted" to discredit an employee, and the episode aired the very night that William Talman was arrested at an apartment where marijuana was found? Was there an existing marijuana "problem" on the PM set? Had employees been warned? This might explain why Mr. Talman was fired so quickly. Or was Mr. Talman set up (he said he had been invited to the apartment for drinks) in order to get rid of him for some reason unrelated to marijuana? Submitted by MikeM, 11 Jan 2013.
+ While it probably was just a coincidence - albeit a remarkable one - if art was to imitate life, or more precisely presage it, it's a shame the "found in the nude" element of Talman's frolic couldn't have been demonstrated by Ms. O'Brien here as well !! In a tasteful, early 1960's way, of course. Submitted by Notcom, 102715.
++ uhmmm, Really? The preceding comment as late in our social evolution as 2015? Stunning. jfh 30Aug2019.

Perry identifies the Colt automatic Betty gives him as a ".38 Super" but the actual gun he's holding is a Model 1911 .45, identified by the flat mainspring housing(the back of the butt). By the time Colt introduced the Super .38,as they referred to it, in 1929 the mainspring housing was curved. Also ,in a couple of scenes, the large bore of the .45's muzzle is obvious. Both chamberings of the Colt have the same dimensions, so most won't spot the difference;not the same for the careless gun-waving shown.. 1Oct,2013 SteveP
+ The M1911 pistol was the standard US Army issue for 75 years before the 9 Millimeter replaced it in the '80s. Mike Bedard 7.28.16
+ Perry released the magazine while talking to Betty (but we don't see him do it). I assume it must have been loaded with cartridges. He then dramatically slams the magazine home thus rearming the gun. It would have been more prudent to keep the gun unloaded and clear the chamber. Kilo 11/19/2019.

Great Guns: This is one of my favorite PM episodes. It features some truly evil people -- the casino owners, who stab their innocent employees, and even each other, in the back, so to say. But I am startled every time I see it, by the careless handling of those enormous Colt pistols, not only by Perry, but Paul too. And Della doesn't seem to mind a bit. John K. 1 October 2015.
+ Speaking of mishandling firearms, we once again see a cop pick up a pistol by sticking a pencil in the barrel, instead of in the trigger guard. Submitted by vgy7ujm on 8 July 2020.

The versatile HM Wynant will eventually play victim, suspect, killer, and prosecutor in various episodes. This episode may lack dramatic scenes, but it is still a favorite for its tidy plot, cast of unsavory characters, and the nifty way Perry puts himself in a spot. And, for once, he has a client who is completely truthful and follows his instructions. The only questionable bit is the idea someone would happen to notice the serial number on a gun. DOD 09/14/20

Anomaly: Perry is tailed from the motel by a black 1960 Buick sedan, but when it forces him to pull over in the next shot it has changed into a black 1959 Buick sedan, which was easy to spot with its unusual diagonally-situated headlight pairs, among other styling differences. MFrench 8/2/16

While Perry is talking with Betty in his office he's interrupted by a call from Della in the outer office. He makes reference to some obscure legal citing. That call doesn't appear to have any bearing on this episode. (I also wonder why Della didn't use the intercom.) Kilo 11/19/2019.

Near the end of the episode, Mason delivers one of the best comebacks in the entire series while cross-examining Anclitis:
Mason: How do you account for this particular gun getting into the possession of the defendant? Did she steal it?
Anclitis: 'Steal' is a big word...
Mason: 'Murder' is an even bigger one.
(Submitted by ParkAvenueBeat 9/14/2020)

More, Please: Too bad the writers couldn't have rearranged things a bit, so that we would have a few minutes to see the perpetrator sweat and squirm on the stand, or in the hands of the police. I wonder how ESG handled it in the original? JohnK, 28 September 2021