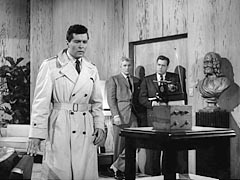 From The Perry Mason TV Show Book
James Frazer has a motive for murder. He wants a divorce and his cheating wife won't give it to him. To top it off, she's been stealing the plans to his invention in order to bait her engineer boyfriend into sticking around.

Frazer skips town for three months to cool off but comes home to worse problems than he left. His wife is murdered in his office on the night of his return. He has the only key to a unique slit-type burglar-proof lock that he invented.

The police think the case is cut and dried--until Perry takes over.

At the 11:22 of DVD, when Thelma Frazer pulls her convertible into her driveway, if you look behind Thelma and Lois, you can see a Nash Metropolitan convertible parked on the street. I may be mistaken, but I think it is a 1959 model. Metropolitans were pretty rare by the time this show was filmed. Submitted by PaulDrake 33. 2 September 2009.       [see Car(c) below, G.W.]
+ Recognize that hat worn by Thelma Frazer? It's been seen before! Submitted by daveb, 4/14/10.

Location: The building seen on the corner as Thelma Frazer drives up to the Hayden Electronics Research Company appears to be located at the intersection of Seward & Romaine streets. It's just down the block from the Seward & Eleanor intersection seen in episode #82 and is at the southeast corner of the studios where the show was filmed at the time. Some pictures here. Submitted by daveb, 4/14/10.

Location: Quick establishing shots of Parker Center 3 minutes in and Stanley Mosk Courthouse at the 32 minute mark. Submitted by Eric Cooper 25 September 10.
+ Parker Center, the LAPD headquarters building seen in various PM episodes, closed its last offices on 15 January 2013. The LA Times says that the city has not decided whether to raze the building or rehab it for some other use. Submitted by MikeM, 16 January 2013. LA Observed article

Sightings: Distinguished Lady #2 and Quiet Old Man #2 appear in the courtroom gallery behing Perry Mason. You can see them in the pictures for the trivia item re Della’s dress, above. Read more about these and other recurring spectators here. Submitted by gracep 10/6/2010.
+ Little Old Lady in a Hat and Quiet Old Man (#1) can also be found in the courtroom gallery. There's a picture of them here. Submitted by daveb, 10/6/10.
+ Cute Young Lady can also be seen behind Lois Langley. “Miss Carmody” looks rather dubiously on at the whole affair from behind the Hayden brothers. As Lois Langley stands we see the ubiquitous Distinguished Gentleman #1 Submitted by gracep, 10/8/2010.
+ During Mason’s initial conference with Jack Frazer, Burr’s stand-in, Lee Miller, playing a plainclothesman (presumably Sgt. Brice) and conversing wtih someone else, walks past the bars. Submitted by gracep 10/8/2010.
+ On the second day of court, Distinguished Lady #4 sits in the back row next to Lady in the Hat. Submitted by Bill767, 10/31/15.

TCOT Peripatetic Prosecutor. Even though William Talman was fired from CBS—see trivia items for epsiodes #87, #88, and #89—he appears in this episode, which was presumably filmed before the whole sordid affair. Submitted by gracep 10/9/2010.
+ No need to presume. This episode has a production number of 101. Episode 104 is the first filmed after Talman's firing and had already been broadcast the previous month. Submitted by Wiseguy70005, 12/22/13.

In the dark: Talking of film, there is something odd about the look of this whole episode. It's as if either the lighting was strange, or they used film stock which had a very low contrast range, or the development of the footage went wrong. The contrast looks poor and affects the look of anyone wearing a dark suit, e.g. Perry during the court-room scenes, or Calvin Boone when he's at Lois' house being threatened. The dark clothes just appear as a black blob. What's going on? Submitted by Clothears 1st March 2020.
+ On rewatching this episode on DVD i agree completely with Clothears, and i offer some further comments and a theory. First, Perry has a stuffed up nose during at least one scene -- and that, along with the production number, dates this show weeks back, to when he had a cold. Next, the blackness is not a lighting problem or a film stock issue, because the opening shot of Perry taking the paperwork from the judge, which is this season's opener, is super-dark and almost chiaroscuro in tonal range. This leads me to a theory. What if the digitization came from a copy of the film? I am used to watching old "dupey" copies of b&w films of the 1930s and that is what this episode looks like, from the standard intro to the end. But why do we only have a dupey copy? I propose that after the firing of Bill Talman, it was presumed that no episode featuring him would be shown, and the original copy ended up missing, but this high-contrast copy existed and was pressed into service. Submitted by catyron, February 18th, 2021.

Whatever the cause, it definitely has something to do with the copy and not just the filming of this episode as the problem is obvious from the opening credits. DOD 10/07/21

The versatile Kasey Rogers looks very different from the way she appeared in her most enduring role. In Alfred Hitchcock's Strangers on a Train, she was billed as Laura Elliott in the role of murder victim Miriam Haines, the bespectacled, unfaithful wife of Farley Granger. Submitted by Fifty-Niner on 28 April 2011.
+ Kasey Rogers may even be better known as the second Louise Tate on the sitcom Bewitched. She originally wore a black wig (to match the hair of the original actress) but later displayed her own lighter red hair. Submitted by Wiseguy70005, 12/22/13.

Parts of the score composed by Bernard Herrmann for The Twilight Zone pilot "Where Is Everybody?" (broadcast 10/2/59) can be heard in this episode. Submitted by Wiseguy70005, 6/16/12.

Redubbed line: After Calvin Boone enters Mason's office he say to Mason "I wanted to see how it worked." His lips do not match the words. Submitted by Wiseguy70005, 12/22/13.

Street name: The street, Sepulveda, used to get to the Wayfarer Motel, was the also the location of the Ideal Trailer Mart in episode 17 TCOT Sunbather's Diary. Submitted by H. Mason 10/31/14
+ Sepulveda Blvd is a major thoroughfare that runs from the northern reaches of the San Fernando Valley (as in "Valley Girls") south through the Sepulveda Pass, down the Westside, passes under the runways at LAX, curves east in Torrance, and ends at the city limits of Long Beach, for a run of just under 25 1/2 miles, the longest street in Los Angeles. Well, the name ends. The street itself continues for quite a ways past that point, under various names, finally ending in South Orange County. It is also one of the featured streets in the novelty song "Pico and Sepulveda" from 1947. OLEF641 2/4/21

Conspicuous Coverup: Like so many supposedly stealthy PM characters, Calvin Boone chooses an enormous, gleaming, eye-catching trench coat for sneaking around (in this case, into Mason's office). John K. 1 October 2015

According to imdb, co-writer Francis Rosenwald began his writing career as Franz Rosenwald. Francis Rosenwald and Marianne Mosner are both listed as writers for the CBS series Men Into Space, broadcast from 1959-1960...MikeM. 8/10/2016

This is the only PM appearance for Ce Ce Whitney...MikeM. 11/16/2016
+ Ms. Whitney has an uncanny resemblance to frequent alumn Joan Banks/Lovejoy, as can be evidenced by comparing them in this montage, although, of course, diligent viewers won't be fooled, since the character is sober. This is, by my count at least the fourth set of separated-at-birth performers (Barbaras Bain/Lawrence, Constances Towers/Ford, Don Dubbins/Steve Franken) PM will employ, and one wonders if it wasn't a little game between the producers to challenge each other to keep digging them up. Perhaps overthought by Notcom, 111716.
+Fifth set: Kasey Rogers/Dorothy Green.
+IMHO Tom Coley (James Frazer), Manning Ross (Calvin Boone), and Doug Odney (Arthur Hayden) are strikingly similar also (PM one time appearence). jfh 06Dec2017.

Ken Lynch plays against type in this episode, playing the owner of a large electronics firm. Mr. Lynch almost always played a cop, detective, FBI agent, or some other tough guy. Submitted by PaulDrake 33. 2 September 2009.
+ I am suspicious from the start of any Ken Lynch character appearing in PM, stemming from his brutal beating of Bishop Mallory in TCOT Stuttering Bishop. True to form, he shows poor ethics in this outing as well, trying -- in vain -- to cheat his partner out of the value he added to the business. JohnK. 1 October 2015 The final courtroom exchange between Perry and Lois Langley(Kasey Rogers)is especially riveting, one I can watch over and over. Joe B. 11/18/21

In his first scene, Paul uncharacteristically wears a suit. Later, he changes to his usual spiffy sport coat. Other than some decorative scorch marks, Frazer's lab doesn't seem to have suffered much fire damage.
Rather careless of Perry to leave his balcony door not just unlocked, but partly open. Since there doesn’t appear to be any glass in the doors, anyway, it probably doesn’t much matter. DOD 08/29/18
+ You'd think he would have learned after TCOT Dubious Bridegroom. OLEF641 2/4/21

In each of the model-years 1959 and 1960, Buick produced a bewildering array of at least 17 distinct Models resulting from the available combinations of six Body Styles with the four Model Lines. Read more at Seventy Years of Buick by George H. Dammann, pp 263-272. The identifications above are based on the aggregate of the 24 appearances across the season; for many of the individual appearances, there is not enough seen in the single episode to make such positive identifications. Nor are Lic No's always seen. I do believe that there actually was this small number of cars used, that there was a business relationship between Buick and Paisano/CBS and that these cars were routinely stabled on the lot at 1040 Las Palmas. Added by Gary Woloski 9/12/12.
+ CAR BUSINESS. For a comprehensive account of the "Business" factors involved in provision of vehicles by an auto manufacturer to a TV production company see the excellent article The Cars on CAR 54, WHERE ARE YOU? by Martin Grams. Also of interest is Martin's opening discussion about the actual paint colors on "Car 54" and real NYPD cruisers. Compare the actual Car 54 in color, B&W and real NYPD cars in color, B&W. Out West in Perry Mason California, things were somewhat simpler since the "Police Black & Whites" seen on the TV screen were still B&W in full color (but, before 1963, their "white" license plates were really yellow). Gary Woloski, 7/6/17.

The workshop door only has a pull handle on the inside. No mechanism to turn the latch. Kilo 5/13/2021.