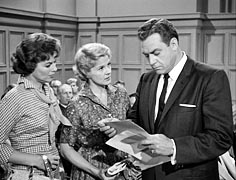 From The Perry Mason TV Show Book (Revised)
This is a strange episode.

Bruce Chapman returns home early from a business trip to find that his wife, Marie, wants a divorce. Chapman is upset and very surprised. Just before he had left for his trip, he thought he had found the strangled body of Marie in her cabin. He thought someone had done him a favor, and hoped the matter would be cleaned up before he came home. But now if Marie is still alive, who was that dead woman?

Beginning the third season, Halo Shampoo, Wildroot Hair Creme, and Colgate Toothpaste are now the sponsors. In the closing credits of this show (DVD version) the products are pictured at lower-left of screen. Submitted by PaulDrake 33 and daveb 9/10/10.
+ Why are they only on the DVD? Why can I not see them on the broadcast on my local TV station? Queried by gracep 9/11/10.
++ The DVDs generally reflect the masters and/or the original broadcast prints. What you see on TV today are the syndication prints. In syndication, you wouldn’t see who the original sponsors were—there are “new” sponsors and the end-titles were changed to remove the references to the original sponsors. Syndication prints also tend to be heavily edited as to content often to the detriment of the story line. Watching syndication prints, many was the time I would be puzzled by dialogue or action that seemed to come out of the blue. Seeing those missing 10 minutes or so on DVD explained much. Submitted by billp, 9/28/10.
+++ The editing of syndicated episodes, which is a common practice today was not always the case. Through the 1970s and into the 1980s in some cases episodes were delivered uncut on film to local stations. It was up to the stations themselves whether to cut an episode and it usually involved cutting one scene (not as much was cut out as it is today) and leaving the rest intact. Depending on the size of the market the station was in or what time of day (or season) the episode was broadcast, the episode may not have been cut at all. Some DVD (and earlier VHS) claims that this is the first time the episodes were seen uncut since the original network broadcast are simply untrue. I recall seeing uncut episodes of Star Trek through the 1970s and Hawaii Five-0 in the early 1980s. Late night reruns of Perry Mason I've seen in the 1970s were also possibly uncut. It wasn't until the early-to-mid 1980s when episodes began to be syndicated pre-edited on tape that stations no longer had the choice of whether to broadcast an edited episode. Also the episodes (during this season) with the sponsor's products alternate with episodes without the pictures. The episodes with the pictures run an average of a minute and a half longer than the ones without (causing even more content to be edited out in reruns). Did this product placement count as 1:30 of commercial time? Submitted by Wiseguy70005, 7/25/14.
++++ The cast's incessant cigarette smoking has ceased with the departure of the former tobacco sponsor, but with the arrival of Wildroot Cream Oil as a new sponsor, we can now marvel at the outrageously glossy hair on Perry, Paul, and Bruce Chapman, with extra shine provided by bright overhead lighting in the final scene. Submitted by catyron 11/4/17
+++++Just watched this episode on MeTV. The Colgate, et al, images are on the closing credits. —yelocab 18DEC18

Normally Mr. Launer, playing our judge today, is listed in the credits as S. John Launer, but for some reason in this episode the “S.” is omitted. The initial is also omitted in #79, TCOT Lucky Legs. Submitted by gracep, 9/17/2010.
+ The S stands for SAUL [IMDb]. MeTV ran this episode Today, but the cable guide listed "Dubious Bridegroom" instead. Mike Bedard 7.5.16

Actress Marion Marshall (Ginny Hobart) was married to Robert Wagner between his two marriages to Natalie Wood. Submitted by MikeM, 11/08/2012.

Script goof: When Paul tells Perry the Spragues' home had been broken into, Perry asks "Robbery?" Paul responds in the affirmative, but both of them (and the scriptwriter) should have known that was a burglary, as apparently there was no violence or threat of violence involved. Submitted by francis, 7/25/14.

Check: The check Helen wrote to Marie was on an account at City Trust & Savings Bank seen in episodes 9 and 65. There will be more in future stories. Submitted by H. Mason 10/22/14

Memphis Mason: About 22 minutes into this episode (on the DVD) the hapless Walter Sprague character says "The last time I saw Marie..." This line has struck me several times before: it echoes the beginning of the final verse of Chuck Berry's "Memphis, Tennessee," released in 1959 (as was this episode) as the B side of "Back in the U.S.A. Although I am sure Mason had nothing to do with it, the song was covered many times a few years later, notably by British bands. JohnK 17 November 2016
+ Good catch !!. The song being, ironically, about a happy home that was "tore apart" by divorce. Chimed in by Notcom, 110317(corr 122019).
I started singing that song when I heard the line (to my wife's dismay), and just a few minutes later saw the comments above. Sprinkling in a little Chuck Berry is always a good thing. Rickapolis 082020

New Wardrobe: With the replacement of the former wardrobe supervisor Dick James by the team of Evelyn Carruth and William Zacha, Della suddenly abandons her neat and professional office attire for a flouncy paisley patio dress featuring yards and yards of gathered skirt. Submitted by catyron 11/4/17

Operator, Please: Long time ago, phone systems ignored a spurious or leading 'one' because it often happened as wires rubbed together in the wind or other line faults occured. (Each dialed digit briefly rhythmically breaks the connection a number of times equal to the digit value. i.e. 3 breaks means the number 3.) Thus you could dial any number of leading ones, and they would be eaten by the switching equipment. Effectively, 110 was the same as 0. Jared 24Sep21
+ When Bruce Chapman opens the divorce papers he calls the operator to try to make a person-to-person call to his wife Marie in Las Vegas. It looks like he dials 110. As I recall from the good old days of operator assisted calls one only had to dial zero to reach the operator. Can anyone explain the 110? Submitted by Kilo 5/2/2018.
++ I was just watching a movie from 1945 on Noir Alley on TCM. A character dialled 110 on a pay phone (remember pay phones?) to get a long-distance operator. So, I'm guessing, 0 was for a local operator and 110 for long distance. I am old enough to remember having to talk to an operator to call long distance, but I don't remember having to dial anything but 0, so 110 must have gone away before area codes made it possible to direct-dial long distance numbers. OLEF641 1/10/21
+++ Update I just read the first comment in this group (which, BTW, was placed in the wrong position, according to its date). Jared is close to the truth. Each dialed digit briefly breaks the connection a number of times equal to one more time than the digit value, i.e. dialing a 3 would cause 4 quick breaks (ergo dialling a 1 would create 2 quick breaks). Thus Jared is right about the spurious single clicks, but wrong about initial dialled "ones" being ignored. Also note that the number for "Information" in those days was 114, which would not work under Jared's model.
My dad in his youth had worked for a phone company; one of his tricks was to 'dial' a number just by flicking the "hang-up" hook instead of using the actual dial. OLEF641 2/25/22

This is the first of three PM appearances for Karl Weber (Bruce Chapman), who did Shakespeare on stage before going into radio, films, and television. His voice was heard on many commercials, and he recorded audio books for the blind. Karl Weber passed in 1990 at the age of 74...MikeM. 7/25/2018

I thought I heard Las Vegas attorney Hibberly say that the residency requirement, for filing for divorce in Nevada, was 44 days. The current requirement appears to be six weeks, or 42 days. Submitted by MikeM, 11/08/2012.


As Tragg leads Chapman away from the crashed car, it looks like the back of Chapman's jacket has straw all over it. At about the half way mark there is an establishing shot of Reno that is obviously stock footage - not a car in it much later than 1940. This is the only episode I recall with a scene in a morgue. It looks like Perry has a new lamp by that long sofa. The original lamp had a matte finish; this one is shiny. In the courtroom scenes, the women are far less glamorously dressed than usual. No furs, just a few simple hats, and Ginny wears not a single piece of jewelry. DOD 07/23/18

Person-to-City Call after receiving his divorce papers, Bruce Chapman attempts to place a call as follows "...I'd like to place a person-to-person call to Mrs. Marie Chapman. No I don't know where she's staying"(emphasis added) No problem, right... I mean: how many places could she be?? Amazed and Bemused, Notcom 080719.

Burger asks Grace Norwood questions about the argument between Bruce and Marie Chapman that only Bruce, Marie and Grace knew about. How did Burger know about the argument? Marie is dead and Bruce is the defendant. And Grace didn’t tell him or else she wouldn’t be deemed to be a hostile witness. Kilo 4/20/2021.

Hibberly seemed VERY jovial for someone who knew he'd killed a person! Brrr! Submitted by MikeReese, 9/20/2013

As usual, a few gaps in logic: If Marie and Hibberly drove to the cabin together, how did he get back to town? If they drove separately, wouldn’t Bruce have been curious about the extra car? Wouldn’t the Spragues have recognized Hibberly in court? And we never do learn why Marie was desperate for $2000. DOD 08/07/19

+ I believe I can answer a few of the gaps. Perry states in the epilogue that Hibberly drove his own vehicle to the cabin. It's possible that Bruce did not see the car depending on where it was parked since he came from the other direction. Given that Walter Sprague signed a really bad agreement for the divorce, it's possible that only Marie went to Las Vegas to establish residency and finalize the divorce so Walter would never have met Hibberly. But more importantly, that is how Hibberly met Marie and they established a relationship as implied again by Perry in the epilogue. Submitted by Kenmore 8/06/2021

Question: Was Virginia Hobart charged as an accessory in the murder or just fraud? Submitted by H. Mason 10/22/14

Kudos to director Arthur Marks for his use of film noir styling in this one -- there's lots going on with mirrors and shadows. JohnK 17 November 2016

Audio changes The audio quality changes in the 3rd season. The sound almost sounds like it is in confined space (compressed, less bandwidth) compared to the airy sound of prior seasons. I listen with headphones and can easily hear the difference. Submitted by Perry Baby 1/11/18

Yes, sounds muffled to me. Submitted by Clothears 2/2/20