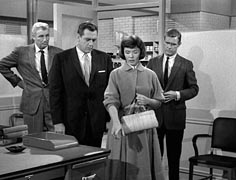 From The Perry Mason TV Show Book (Revised)
When Karen Lewis is accused by her boss of selling secret lipstick formulas to a competitor, he agrees to forget the whole thing if she’ll give him a tickle. She refuses, only to get wrapped up in murder when the owner of the company gets iced and Karen winds up as the prime suspect. The fact that Karen is the only one in the dead man’s will appears to be the kiss of death, but Perry comes through and clears her of the smear. Fans who remember Time Tunnel will recognize Whit Bissell as Max Pompey. 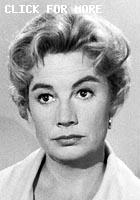 The name of the door is Caresse Cosmetic Products but the logo on the building just makes no sense. Submitted by Tom Grossman, 5/2/2004.

+ It's also possible it's the abbreviation in French - Caresse: Produits Cosmetiques - or even some other language. Submitted by Notcom, 102015.

Pat Breslin (also listed sometimes as Patricia Breslin) makes her first of 3 appearances on Perry. Baby boomers know her best as Jackie Cooper’s girlfriend on The People’s Choice and Laura Brooks on Peyton Place. In 1969 she made her third marriage to Cleveland Browns owner Art Modell. Submitted by PaulDrake 33, 6/16/2009. + Well this baby Boomer best remembers her as the patient and sympathizing wife of William Shatner in the Twilight Zone Episode "Nick of Time" (PB: Are you just going to sit there ?? WS: "I...D..O..N..'..T... K..N..O..W !!" was one representative exchange) Submitted by Notcom, 102015.

You may remember Whit Bissell as Army Lt. Gen. Heywood Kirk from The Time Tunnel, but you may also remember Bissell as Ralph Branly from the 1960s George Pal Productions movie The Time Machine. Submitted by Charles Richmond, 07/29/2009.
+ Whit Bissell might be considered the Donald Crisp of American television with so many appearences under his belt. He’s most famous for playing the “mad” scientist in the horror cult classic I Was A Teenage Werewolf. Although many will remember him from the famous Star Trek episode “The Trouble with Tribbles.” Interestingly enough, his first movie appearence was in Errol Flynn’s The Sea Hawk…which also included Donald Crisp. Submitted by Kenmore, 11/13/2009.

Whit Bissell and Dabs Greer were two very busy performers. Each has an astonishing 300 plus acting credits! DOD 090/03/18

This episode is another entry in the continuing saga, TCOT All-Purpose Address. When Karen Lewis (Pat Breslin) arrives at Caresse Cosmetics to discover and be framed for the murder, Paul Drake checks her auto registration to confirm her identity. Her address is given as 1040 N. Las Palmas, the same street and number as artist David Lambert (Joe Maross) in #89, “TCOT Crying Cherub,” and as actor Lou Caporale (Peter Leeds) in #78, “TCOT Artful Dodger.” Ironically, Maross appears as A.D.A. Helming, in this episode. Submitted by FredK, 26 November 2009.
+ It appears that 1040 N. Las Palmas is the address of Hollywood Center Studios. Dating from 1919, many TV shows have been produced there including Perry Mason. Read more here. More about this on the Location Trivia page. Submitted by daveb, 11/26/2009.

Anomaly: Most people in this episode. pronounce Pompey’s name as POMP-ee, but some pronounce it as pom-PAY (like the ancient Roman city). Submitted by gracep, 10/18/2010.
+ As court begins, the bailiff announces the judge’s name as the Honorable John Davis. However, the credits refer to him merely as “Judge.” Submitted by gracep, 10/19/2010.
+The pun on the name Pompey the Great, or Pompey Maximus(or Magnus)and "Max Pompey" is one of my favorite in the whole series. Submitted by Rickapolis, 04/12/12 (my first post)

This car appears next in Ep#105 in which the plate number is readable as "TZX 479". I believe that this is a first in the series for the plate number to correspond to the number on the registration! Submitted by Gary Woloski, 18 Sep 2012.

Strange DVD Closed-Captioning: Near the beginning of the episode, when a timer goes off in a test of the lavender lipstick (1:08), the closed-captioning reads "Phone ringing." After Pompey fires Karen (6:14) the captions read "If you tell Peter Nichols about this, I'll have him fired him too." When Paul leaves Perry's office and says "OK, Perry" (11:17) the captioning reads "OK, great." It is unknown if the syndicated episodes has the same captioning. Submitted by Wiseguy70005, 4/02/14.

IMDB identifies the Joe Maross character as A.D.A. (Assistant District Attorney) Ernest Helming. Perry tells "Mister Helming" to have a nice lunch to help remind the audience who the prosecutor is. The final credits make no mention of his prosecutor's status...MikeM. 8/18/2016

This is the second of two PM appearances for John Lupton, who appeared in thirteen episodes of the daytime serial Never Too Young...MikeM. 11/24/2016
+John Lupton and Rita Lynn also appeared in TCOT Bartered Bikini. Submitted by Steve Fox, 2/5/2023

Judas Goat: The Judas goat is trained to associate with sheep or cattle, leading them to a specific destination. In stockyards, a Judas goat will lead sheep to slaughter, while its own life is spared. Kilo 12/02/2019.

Poor Paul Drake. I thought he had men working for him, but Perry insists he handle all the investigations himself -- even if it means giving up a vacation -- or, in this case, ignoring a subpoena requiring him to be in court! submitted by scarter 8/23/14

Great line: When Peter Nichols entered the lab with Perry, his boss said: "What are you doing with a lawyer? You're not that late." Submitted by H. Mason 11/2/14

Max pulls Karen Lewis’s file from a file drawer labeled “A - B”, and it’s the upper right drawer in a bank of file cabinets. Businesses in PM sure do have eccentric filing systems. DOD 10/01/20

The Human Bunsen Burners The mating of Max and Myra's lips was one of the more impassioned scenes we've seen in the series...it's lucky they didn't start a lab fire !! Submitted by Notcom, 111315
Communication Via Cosmetics: This is the second episode where crucial communication is conveyed by a lipstick -- hidden underneath the desk (or table), no less -- the first being TCOT Moth-Eaten Mink, I believe. JohnK, 15 October 2021

<<<<<<< TCOT Repeat Offender. Some people just never learn. Case in point, Dabbs Greer. He was the killer in TCOT Prudent Prosecutor. In this episode his itchy trigger finger takes out Silas Vance. What other actors have been the murderer in more that one episode? Submitted by MasonJar 6/18/2012+

I've always thought this was one of the better confessions. Greer was excellent, as was William Hopper, just listening. A fine job all around. Submitted by a Rickapolis 8/17/16
+ Robert H. Harris was the murderer in two episodes ... and was the defendant in a third! submitted by scarter 8/23/14
+ More info on this topic can be found on the StatisticsPage ! Submitted by HamBurger Aug. 29, 2014

OK, can anyone explain how Knudsen got knocked out with a wound behind his head if he is the murderer ? Submitted by HamBurger Aug. 29, 2014
+ Desperation. Knudsen, the security person, had committed the murder. He couldn't leave so he had to somehow incapacitate himself. He had a self-inflicted wound and faked being unconscious to allay suspicion. In reality people have been known to shoot themselves in similar situations. Submitted by H. Mason 11/2/14

How did Perry know about meetings between Max Pompey and Gabriel Rawson? We never saw him talk to either man and never saw Pompey on the witness stand before Paul served the subpoena. Submitted by H. Mason 11/2/14