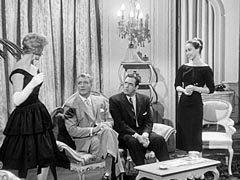 From The Perry Mason TV Show Book
Perry doesn't want to get involved in a family dispute when a childhood friend, Eileen Harrison, seeks a divorce from her husband, Danny. Perry feels differently about defending Danny, though, when the man is framed for murder.
+The dispute revolves around Danny's commitment to Teaching -- his "Noble Calling" -- which doesn't pay enough to support his family. Mike Bedard 6.3.16 MeTV viewing.

Irony. The opening scene shows two appliance store employees repossessing a washing machine. One of the main actors in this episode is Jesse White, for years the lonely Maytag washer repairman. Submitted by PaulDrake33.
+ Jesse White portrays the short-order cook/owner at the diner at which Danny is moonlighting. cgraul 4.3.12
++ JW has 175 IMDb Actor credits, including 5 Perrys from 1958-65. Mike Bedard 6.1.16. //

The above appliance store truck bears a sign identifying the firm as Walsh’s Appliances (“Your Credit is Good!”) and gives the telephone number WEbster 12499. This phone number is used in the very next episode (“TCOT Jilted Jockey”) for the home number of gambler/murder victim Johnny Starr. Submitted by FredK October 25, 2009.

Uncredited Actors: One of the Walsh’s Appliance men reposessing the washer is the ubiquitous Don Anderson. Later in the episode he appears again as a courtroom spectator on the last row behind the defense. As the trial goes on, he moves closer to the front. Submitted by FredK 2 October 2010.
+ Read more about Anderson and other uncredited actors. Added by gracep, 10/3/2010.
++ Lee Miller shows up as Sgt. Brice. We also see him sitting in the courtroom gallery (but it still could be his Sgt. Brice character). Submitted by gracep 11/15/2010.

Syndicated cuts: First scene at the cafe with a customer paying his bill and Luke telling Danny he may not be able to employ him for long; scene at Danny's house with the police arriving, informing him of the murder and Danny's arrest; the police questioning Hickey before Mason arrives; Burger's first examination of Lt. Tragg. Submitted by Wiseguy70005, 7/23/12.

While Tragg is looking for the secret compartment in Curran's car, a police radio is heard. Station A mistakenly calls Unit 7, then corrects it to Unit 3. Unit 3, however, never responds as is soon announced. Submitted by Wiseguy70005, 8/25/13.
+ There is similar but not identical police radio chatter in TCOT Gilded Lily when Tragg is looking for something that may have been hidden in his car. Submitted by Duffy, 10 May 2014.

While Mason is questioning Luke the level of coffee in Perry's cup changes. There is more in his cup after he takes a sip then before (close-up). Then the level goes back down without taking another drink (long shot). Submitted by Wiseguy70005, 8/25/13.

When Linda Kennedy approaches the stand Tragg reaches over to stop the gate from swinging. Whether this was in the script is unknown. Submitted by Wiseguy70005, 8/25/13.

Frances Helm who played Linda Kennedy in this one, was first married to Brian Keith. They subsequently divorced after 6 1/2 years and on the same day they divorced (06/23/1954), Brian Keith married his 2nd wife Judith Landon. WOW! Submitted by mesave31, 05/07/15.

I believe this is the second episode so far (the first was #29) where Perry pulls his "suppose I told you..." trick on a witness, in this case Luke Hickey. Submitted by 65tosspowertrap, 5-10-2014.

Murder site: According to a sign in the parking lot Frank Curran was killed in apartment 503 of the Mandrake Arms. In episode 8 TCOT Crimson Kiss Carver L. Clement aka Philip Walsh was killed in apartment 702 of the same building. In the earlier story the Mandrake Arms was a security building that required a key for entry. Frank left his keys in his car. Did Danny ring bells until he was buzzed-in or did he go in as somebody entered or left? Submitted by H. Mason 10/13/14

Repeat location: Luke tried to hide from the police at the Baldwin Motel. In episode 14 TCOT Baited Hook Bob Dawson and Carol Leeds aka Carol Stanley were apprehended in the parking lot of that business. Submitted by H. Mason 10/13/14

Recycled newspaper: The newspaper held by Mrs. Cunningham as she discovered the body in apartment 503 came from episode 41 TCOT Lucky Loser. Submitted by H. Mason 10/13/14

This is the second of six PM appearances for Olan Soule. One of his many show business roles was as the voice of the animated Batman...MikeM. 9/9/2016

This is the second of three PM appearances for Carol Anderson, all of them portraying models...MikeM. 6/21/2018

This show has one of my favorite postscripts, soft humor between the three leads. It begins with Della pretending exasperation and emphatic patience with Paul and ends with Paul on the short end of a Perry bit. cgraul 4.3.12

If it was so necessary to interrupt Hickey's testimony so Lt. Tragg can testify and go to headquarters where he is needed, then why does Tragg sit at the prosecutor's table after his testimony while Hickey is called back? Submitted by Wiseguy70005, 7/23/12.

Did I hear correctly? Eileen was the first female to propose marriage to Perry? When they were children? At a farm in Oregon? Perry turned her down? Submitted by MikeM, 10/22/2012
+ Raymond Burr worked as a forest ranger in Oregon & fought fires there, as noted by Governor Mark Hatfield during RB's Person to Person interview [PM 50th Anniversary DVD]. Mike B. 6.3.16.

Another female in the case, Linda, has also been asking a man to marry her. And also has been turned down. Submitted by MikeM, 10/22/2012

We never do find out why Linda has been pursuing a man she says she loathes. DOD 07/04/19

+ It is rather implied why Linda wants to marry Frank. Given the hurried nature of why she wanted to speak to him that night. Why her business partner said she couldn't because of his condition. The fact she did marry her business partner just after not being able to see him. And when Perry purposely stops short of asking that direct question again once she says she "loathes him". Submitted by Kenmore 10/21/2020

I find the oft-quoted book The Perry Mason TV Show Book by Brian Kelleher and Diana Merrill to be rather amateurishly written, more on the fanatic side than fan ("by two of his greatest fans" says the cover). Rather than a serious look at the series it is more of a "every episode is the best, all the actors should have received an Emmy® for every episode" type of book. The attitude toward the New Perry Mason series ("The less said about this bomb, the better") starring Monte Markham ("journeyman actor") is especially childish. None of this explains the inaccurate episode summaries many of which have been corrected here. In this episode, it is stated that Danny is framed. Who framed him? Even the murderer stated that having Danny arrested was not intended. Submitted by Wiseguy70005, 8/25/13.
+ For the most part, I agree with Wiseguy70005. However, we must consider that the book was written in 1987, 26 years ago. At that time, the only way to see the show was to hope that a local station was showing the syndicated (often cut) reruns, and maybe videotape them yourself. The series was not available via VHS tape. There was no online IMDB or Wikipedia to give us info on the series. I remember when the book came out. I immediately ordered it. With all it's flaws, the book, at that time, was the most complete source of information on the show. I had my copy for many, many years, and enjoyed reading, and rereading it. Submitted, with fond memory, by Bill-W2XOY on 08/25/2013.
++ My dog-eared copy of the book has earned a well deserved retirement on my bookshelf; I agree it was better than nothing in the "good old days." Submitted by francis, 06/01/14

Re: the "Perry Mason TV Show Book", here is another oddity to ponder. In the book, there is a picture of Raymond Burr from the "Kingston Confidential" series with actress Dina Merrill. The co-author of the book is Diana Merrill. Any relation? Question by Bill-W2XOY on 08/25/13..

Plot Hole? Why was Frank Curran drunk when he walked in Luke Hickey's "choke 'n puke" restaurant? He was the big winner at the poker game--presumably he wasn't drunk then-- and he went from the poker game to the restaurant. So why was he drunk? It makes no sense other than as a plot device to implicate Danny Harrison. Submitted by 65tosspowertrap, 5/10/2014.
+ Perhaps alcohol was consumed at the poker game. jfh 17Jul2020

A Sign of the Times? This episode answers a question I have long had. There are several episodes of Perry Mason, including this one, where someone--usually Perry, Paul, or Tragg--learned someone's name and address from the vehicle registration displayed in their car. Usually the car was a convertible (popular in southern California) and the registration was typically on the steering wheel post or on the sun visor. The question I had was whether the law at the time required the registration to be so displayed. In this episode Perry, during his questioning of a witness about a car, says the law required the registration to be in the car, and that it was probably on the steering post. From a privacy and security standpoint this is a terrible thing to do, since, if the car is a convertible with the top down, anyone outside the car could learn the owner's name and home address by looking at the registration. In this episode it had tragic consequences for the murder victim, who was tracked down by the murderer who saw the registration in the victim's convertible. I don't know what the law is now, but I would be surprised if it still required the registration to be displayed in this manner. Submitted by 65tosspowertrap, 5-12-2014.
+ I also don't know what the law is now, but the current law was also featured a year or so later in the novel The Case of the Waylaid Wolf, chapter 14, where Perry says to Della: "Get the license number of the car that (Officer) Peter Lyons tagged for double parking. Then get Paul to start his men running down the registration of that car, or it probably will be on the traffic ticket itself since the officer would take the owner's name from the Certificate of Registration which the law requires to be either on the steering post or on some portion of the automobile that is clearly visible." Submitted by Wiseguy70005, 7/16/14.
+ I was a child in the 1950s and my parents 1953 Buick had the car registration in a plastic case wrapped around the steering column. So if it wasn’t legally required it seemed fairly common place. mikemcs1 7/2019

I do not know which episode was filmed first (the prior episode TCO the Buried Clock or this) but the cabin interior wood panels from the prior episode are identical to interior panels in Luke's cafe. I assume they were just reusing sets. Submitted by Perry Baby 1/15/15.

Translation: "Cherchez la femme" means "look for the woman". It's a phrase used when a man has troubles the source is usually a woman. see http://www.phrases.org.uk/meanings/cherchez-la-femme.html Submitted by Kilo 6/15/2017.

Curran had 2 $500 bills in his pocket after the poker game? Wouldn't he be using smaller bills for a poker game? But, of course, the plot required those unique bills. In several PM episodes, characters have $500 bills ($500 in 1955 is worth about $4,000 today. Who walks around with that much cash?)--yelocab 15NOV18

Killed by the "Maytag Repairman". Who would have thought? Submitted by HamBurger, 10/7/2017

How did Perry know that the wrong key was in the ignition, and that Tragg couldn't start it? Were ignition/trunk keys -that- similar that they could both be inserted? If it was a guess, Perry would have had a 50/50 chance of being right. --yelocab 15NOV18