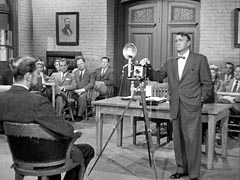 From The Perry Mason TV Show Book (Revised)
Dr. Blane's son-in-law Jack Hardisty embezzled $100,000 from the good doctor and is trying to blackmail him for more. Blane hires Perry to put a stop to Hardisty's misconduct. But before the lawyer can swing into action, Hardisty is found dead, and Perry must defend the doctor against a murder rap.

Notice the old-style split screen used when Perry is talking to his client on the phone.

Correction to the Summary: Jack Hardisty did not embezzle $100,000 "from the good doctor", he stole the money from the bank where Dr. Blane had gotten Jack the job. jfh 20Jun2018 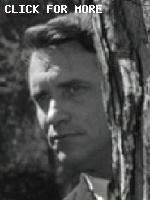 Location: I am watching the second season on local TV. Ironically, the same day #45, The Case of the Buried Clock, aired I was also reading an article about Malibou Lake. I knew several episodes were shot there but on this episode the angle of the newspaper photo was almost exactly the same as the establishing shot on Perry Mason. Submitted by Eric Cooper, 11/8/07. Some pictures here.

At the 3:04 minute mark, the exterior of the house used in that nighttime, medium long-shot is actually 'taken' from the 1945, 2oth Century-Fox , Technicolor picture - "Leave Her to Heaven". That house was referred to as the 'Back of the Moon Lodge", as the lake it abuts is shaped like a crescent. If you click on the "here" link, above, the image is the last of the "More Establishing Shots" images. Submitted by S. Stuart on 12/18/18.

Several of the Presidential portraits hanging on the wall of the courtroom are the same portraits that hang in the courtroom in episode #50, TCOT Perjured Parrot. Submitted by PaulDrake 33.
+ Is the painting parallel to the witness stand "Washington Crossing the Delaware?" Mike Bedard 6.2.16 MeTV viewing.
++ "Perjured Parrot" POTUS gallery: Rutherford Hayes (alone); Andrew Johnson/Abraham Lincoln/George Washington/Thomas Jefferson/John Adams; John Adams (alone). A picture of Washington standing against a mantle hangs between the witness chair & window. Mike Bedard 6.9.16 MeTV PP viewing. //

Character Names: Sheriff Elmore is called “Bert” during the episode. Submitted by gracep, 8/2/10.

Location: There are several interesting establishing shots in this episode including one of an odd, rural courthouse. Some pictures here. Posted by daveb, 9/1/10.
UPDATE : Sierra City unmasked After several years of diligent searching, this AM a 7 second google image search has identified the establishing shot of "Sierra City" (It would also be used in another episode as "Pinewood"): Petaluma (For those of us in the Bay Area, perhaps, a bit of a humbling discovery... as Carol Reed (TCOT Drowning Duck) remarked "I ought to know, I was up there often enough.) Notcom, 092917.

Neither D.A. Burger (William Talman) nor Lt. Tragg (Ray Collins) appears in this episode. Posted by gracep, 11/7/2010.
+ In the original book, Lt. Tragg does not appear at all, and D.A. Burger appears only toward the end (p. 280 out of 312 in my copy). Speaking of changes from the book, it interests me how the TV episodes change some of the names of Gardner's characters. For example, the TV show has Sue Hardisty, but in the book it's Adele Hardisty. I wonder why the TV writers sometimes do this. Submitted by Ed Zoerner, 3/15/11.

Haven't read the book in some time, but I do recall that Perry actually finds a buried clock and there is a lot of nonsense about sidereal time. On TV, Perry just seems to invent the idea of the clock being used to trigger a camera. DOD 07/03/19

There are three considerations to character naming in filmed work: ease of understanding, legal considerations, and distinction (from other characters). (very occasionally, an actor will request a change due to pronunciation difficulties). Although Adele has been used in films, it is more rare on TV, perhaps due to decreased attention given TV compared to movies and, of course, literature. cgraul 7.17.12

Syndicated cuts: Drake's men at Hardisty's house, Hardisty on phone, detectives following him; in the first court scene, Blane and Mason talking, Hale introduced, everyone rising and facing the flag, judge appears, Dr. Ritchie's testimony concerning Scopolamine; Additional Hallmark cuts: Part of Perry and Paul's conversation about when the detectives lost Hardisty and how; part of Paul at Hardisty's house approaching a tree, pausing, then running to Blane's car, looking inside, walking to Hardisty's car, then approaching the house; the Sheriff asking Blane if the gun is now in Blane's Car and the doctor replying it's gone; Sue telling Mason she was nowhere near her house last night, she can't prove it, it's embarrasing, Mason telling her to help her father he needs to know everything and if it has nothing to do with the case it'll go no further; Hale's re-direct examination of Paul; part of Beaton's testimony about watching for the flash at 7:30; the judge telling Mason he would require really conclusive evidence to alter his opinion about binding the defendant over for trial. Submitted by Wiseguy70005, 7/24/12.

Glovebox Guns: Dr. Blane belatedly reports that Philip Strague's gun was in the glovebox of his car but it is now missing. This has happened in several other episodes. Submitted by ProMason, August 14, 2014

I like how Paul gets a bit sassy with the DA, who neatly manages to get back at Paul at the end of his questioning. DOD 07/03/19

Sierra City: According to dialog in this story it is about a one hour drive from L. A. Jack left his home at 3:55 and lost Paul's men near Union Station just after 5:00. In episode 31 TCOT Fiery Fingers Paul seemed to take a commercial flight to get to Sierra City so he could investigate the death of George Gordon's first wife. Submitted by H. Mason 10/13/14

This is the second of two Perry appearances for Robin Hughes, the first as Addison Doyle in "The Case of the Green-Eyed Sister". Also in 1958, he played Brian O'Bannion along side Rosalind Russell in Auntie Mame. jfh 20Jun2018.

This is the first of four PM appearances for Robert Foulk. He played a law enforcement officer in each role...MikeM. 9/8/2016

June Dayton (Sue Hardisty) used her hometown of Dayton, Ohio, to create her acting surname. June Dayton married actor Dean Harens in 1947, and they remained married until her death in 1994 at the age of 70...MikeM. 6/20/2018

Recurring Props: The beloved banjo barometer/thermometer is featured in this episode. Submitted by catyron, December 18th, 2020.

All Those Trophies: My husband and i counted a total of FOURTEEN trophies in the doctor's lcabin library. Were they for fly-fishing or for playing bridge? Submitted by catyron, December 18th, 2020.

TCOT Floral Tea Cups: The vaguely floral tea cups have returned. This is one of three sets of Pre Curious Coffee Cups. (The other two are the conical art deco set with striped rings and 7-shaped handles, and the set with what appear to be chickadees on the sides.) I am pretty sure from the shape of these cups that they were made by Syracuse China and i am leaning toward the pattern being "Sovereign," which features stylized leaf-shapes. I have yet to get a good in-focus look at them. Submitted by catyron, December 18th, 2020.

This is one of my favorite episodes, because it involves pre-digital camera technology and because there is a quite a twist to it, involving the title, as you will see from the spoiler below. (This I moved from the Summary section because it is a spoiler.) Submitted by gracep 11/4/2010.

This is the second of two consecutive episodes where an alarm clock plays a crucial role. In both episodes we see Perry winding the clock in court (although at least it's not the same clock). Submitted by 65tosspowertrap, 5-8-14.

Thankfully Fredd Wayne does not affect one his usual iffy accents. DOD 07/16/20

There's something about the looks of both Charles Cooper and Fredd Wayne ... both of them, especially Cooper, make me think of characters in a 'Tijuana Bible' comic. Submitted by MikeReese, 11/27/2020.

A rare case of continuity in the series. Perry and Sheriff Elmore mention they were acquainted (episode 7 TCOT Angry Mourner with a different actor as sheriff) and the same with Mr. Hale. Submitted by H. Mason 10/13/14
+ Also, actor Jamie Forster plays the judge in both episodes, implying that he is the same judge. However in ep. 7 he was not named (nor credited), but here he is credited as Judge Norwood. Added by alan_sings, 12/6/2014.
++ Yes, JF Judged 4 Perrys: "Angry Mourner" ('57 uncredited), "Buried Clock"/"Petulant Partner" as Judge Norwood ('58/'59) & "Potted Planter" ('63 generic Judge) [IMDb]. Mike Bedard 6.1.16.
+++We found Mr. Forster's performance in this episode eccentric, but most entertaining. Aside from apparently forgetting to put in his teeth that morning, he seemed to be having a hard time staying awake. Leaning forward, he would chew his gums, bulge his eyes, and dart them back and forth between Mason and the prosecutor. The overall effect was not unlike that of Foster Brooks, from the Dean Martin show, or Otis, the perennial guest of the Mayberry jail on The Andy Griffith Show. Submitted by Vladimir Estragon, 18 Oct 2020.

Incorrect show summary: According to Perry, Beaton's camera did not take the killer's picture. Submitted by Duffy, 8 May 2014.

Moved from Summary: Perry does some fascinating courtroom work in this episode. He finds out that a wildlife camera, triggered by a buried clock, took misleading pictures of the real killer to “prove” the man was not at the murder scene.
+ In my considered engineer’s opinion, that unsecured clock would have pulled itself off the table and onto the floor before triggering the camera. Opined by daveb, 11/8/10.
++ According to Newton's third law of motion, you are correct. Duffy, 8 May 2014.
+++ Also, although not all alarm clocks work alike, Perry first sets the alarm at 7:30 then proceeds to move the time backwards until a little before 7:30. Wouldn't the alarm sound immediately while it was still in his hands? Submitted by Wiseguy70005, 7/24/12.
++++ That high-tech alarm clock seems to have an alarm on/off switch. Perry seems to turn it on right before he puts the clock face down on the table. Submitted by 65tosspowertrap, 5-9-2014.

Note to daveb:(EDIT) I was thinking the same thing about the clock not being on the floor, as it would have been on (well, under) the ground in the scheme. I noticed that there seemed to be a rubber band in the line from the shutter lever and the tripwire, probably to keep the line from pulling the camera over as well. I should have added that I did freelance photography for a few years, and my father did as well for many years. The rubber band would have absorbed the sudden shock of the trip wire/string and allowed the shutter to release a little more slowly. The camera would still have to have been firmly planted.. Submitted by MikeReese, 8/6/2013, edited 8/16/2014.

It's strange that neither Perry nor anyone else mentions the obvious error: Philip Strague is walking along the trail and supposedly trips the camera accidentally. Yet he has his head turned to the right, looking directly at the camera as the flash goes off. It would have been impossible for him to turn and look that fast, unless he deliberately tripped the wire and knew ahead of time where the camera was. Which he did. It's a damning piece of evidence that no one seems to notice. Submitted by Scarter, 12/14/13

Footprints: Why didn't Philip leave tracks when he attached the camera to the clock? How about when he retrieved the clock? Submitted by H. Mason 10/13/14
+ I submit that Philip covered his tracks when he attached the camera to the clock and subsequently removed them. But he had to keep the tracks along the trail, otherwise it would be really suspicious. A better question however is why the camera is so close to the trail. Given the trip delay, a deer or other animal would most likely be out of frame. Given the picture of Philip and how close it was, I think it would miss most any animal. After all, a wider shot could be cropped in during the development of the picture. Submitted by Kenmore 10/18/2020.